In a case management summary [Docket No. 4], the Debtors provide some insight into an industry clearly decimated by COVID-19. For these Debtors, the experience has been in some senses anamolous as judged against an industry projected to lose up to $240.0bn by year end. Looking at a super-sized plastic glass as half-empty, buffet restaurants have been handed an even shorter straw than most restaurants given that the business model does not easily convert to provide take-out meals. With the glass half full, the fact that the Debtors operate in Florida and Georgia, where state governments have eased restrictions substantially, gives the Debtors hope that they can have 24 locations open by the end of 2020. Chapter 11 will also give the Debtors the opportunity to reject at least 6 leases.

The summary states: “The unexpected and unprecedented COVID-19 pandemic, (the 'Pandemic'), severely impacted the Restaurants….Commercial and retail operations, particularly those providing services deemed non-essential, were forced to adapt, or shut down. Eateries with existing delivery options attempted to continue operations, yet those without delivery, especially buffet style eateries, like the Restaurants, were not designed as take-out providers and subsequently faced closure.

On March 16, 2020, all Restaurants were closed. During April through July 2020, the companies considered numerous restructuring options and negotiated with various creditor groups as to past due obligations. Beginning in late August through mid-September several locations reopened in Georgia and Florida; currently six (6) locations are open for dine-in service.

The Pandemic continues to influence national and state public health policies, yet restrictions in both Florida and Georgia have eased substantially providing the Restaurants an opportunity to increase operations. Mr. Holm and his management team are prepared to implement new designs for the Restaurants to enhance dinning safety and will utilize the chapter 11 reorganization process to begin implementing those redesigns while assessing which locations remain viable going forward. Restaurants are gradually reopening for dine-in services, and additional locations will reopen when management believes it is safe to do so.

The Pandemic is creating enormous disruption throughout the economy, and the restaurant industry as a whole is especially affected. In June 2020, The National Restaurant Association released new data outlining the grim COVID-19 impact so far. The National Restaurant Association said restaurants lost $40 billion in May, bringing the three-month total to $120 billion after March dropped $30 billion in an abbreviated window and April sank $50 billion as stay-at- home policies covered the entire month. Overall, restaurants are expected to lose some $240 billion by year’s end.

Since the March closures, six Restaurants have been reopened, and the Debtors anticipate opening another eighteen stores by the end of 2020. Leadership will continue reviewing underperforming locations for potential closure and/or sale where appropriate. Debtors expect to reject at least six leases in the very near term. An emergency motion to reject certain leases is expected to be filed contemporaneously or shortly after the chapter 11 petition is filed. Debtors will continue to closely monitor the Restaurants performance during the Pandemic and the assorted State shelter-in-place orders to determine which locations remain viable.”

The Debtors operate thirty-three Golden Corral restaurants, (the “Restaurants”), located in the greater Orlando, Florida and Atlanta, Georgia areas. Mr. Eric Holm, (“Mr. Holm”), serves as 1069 RG’s manager as well as the manager and President for each subsidiary. The Restaurants were designed to offer traditional all-you-can-eat buffet and grill style dining during lunch and dinner hours. The number of Restaurants grew steadily through the 1990’s, then more than doubled in 2004 with the addition of thirteen new locations. Growth steadily continued through the 2000’s, and the Debtor became the largest franchisee in the Golden Corral chain of restaurants. The combined companies 2019-year end restaurant sales were more than $141 million. 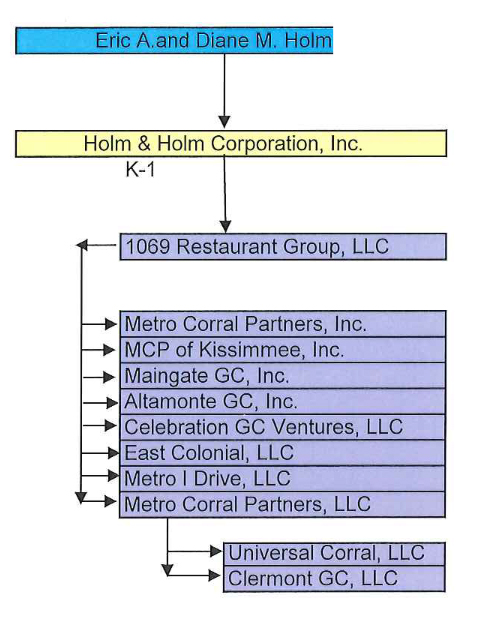