The Debtors are controlled by Emerald Group, LLC (“Emerald”) which received almost $185.0mn (principal) of funding from LoanCore Capital Credit REIT LLC ("LoanCore"), asset managers with a commercial real estate focus and owned by two of the world’s biggest investors: Singapore’s sovereign-wealth fund GIC and the Canada Pension Plan Investment Board. As described further below, Emerald has found itself unable to proceed with gentrification plans at its East Harlem properties following the passage of the New York Housing Stability and Tenant Protection Act of 2019 ("HSTPA") which (i) effectively gave tenants a veto over any planned condominium conversions ("effectively blocking all condominium conversions in the city") and (ii) placed limits on rent increases making planned renovations unprofitable.

As the WSJ reported in October, Emerald's President Isaac Kassirer "was at the forefront of one of the hottest trends in commercial real estate. He borrowed from global investors by promising to gentrify apartment buildings in New York’s low-income neighborhoods and raise the rents. Mr. Kassirer fell behind on some loans before the coronavirus pandemic and now some tenants are in open rebellion. Longtime residents, joined by some new, high-paying renters, are on strike. When the pandemic ends, recently passed pro-renter laws are likely to make it harder for him to carry out his plan.

'Gentrification came back to bite them in the tushy'” said Cathy Stephens, a 31-year resident."

Less charitable than the WSJ, worstevictorsnyc.org gives some background on why Cathy Stephens and fellow tenants might have been more motivated than most to take a stand against Kassirer and Emerald: "Isaac Kassirer is best known for the state of neglect in which he leaves most of his buildings. For years, tenants in his buildings have endured dangerous combinations of widespread rat and roach infestations, no cooking gas, heat and hot water outages in the dead of winter, toxic mold in their apartments, and a complete lack of repairs. In East Harlem, the only office of his management company, Archrock Management, has blacked out windows, a permanently locked door, and a phone that no one answers. When tenants report violations or exercise their right to withhold rent for substandard housing, Kassirer uses housing court to try to push them out of the building."

The Debtors have entered into a restructuring agreement with LoanCore (the “Restructuring Agreement,” attached to Docket No. 3 at Exhibit A) further to which ownership of the Debtors' properties will pass to a designee of LoanCore.

Further to the terms of the December 28, 2020 Restructuring Agreement, "the Debtors agreed to a consensual Chapter 11 plan ('Plan') that will transfer the Properties to the Lender’s designee to satisfy Lender’s secured and unsecured claims against the Debtors. Under and subject to the Plan, the Debtors’ project that all creditors holding allowed claims (other than LoanCore and insiders) will receive payment in full in cash on the effective date of the Plan, provided, however, that general unsecured claimants will not receive pre-petition interest or post-petition interest on their allowed claims. Further, pursuant to the Plan,the aggregate amount of consideration to be distributed by the Successor Owners on account of Allowed General Unsecured Claims shall not exceed $670,000.00. If the aggregate of Allowed General Unsecured Claims exceeds $670,000.00, holders of Allowed General Unsecured Claims will receive their pro rata share of $670,000.00. The Plan and a disclosure statement (“Disclosure Statement”) are being filed contemporaneously herewith, and the Debtors are seeking a hearing to consider approval of the Disclosure Statement.

The Disclosure Statement adds: "The Plan’s key elements are as follows:

In a declaration in support of the Chapter 11 filing (the “Diamond Declaration”), Ephraim Diamond, the Debtors’ Chief Restructuring Officer, detailed the events leading to the Debtors' Chapter 11 filing. The Diamond Declaration provides: “The 107 Debtors [see structure chart below] purchased the 107 Properties in December 2016 to effectuate condominium conversions. The 117 Debtors purchased the 117 Properties in March 2018 to renovate vacant apartments to increase the rent rolls. Both well-laid plans were stymied by the passage of the New York Housing Stability and Tenant Protection Act of 2019 ('HSTPA'). Under the HSTPA the number of tenants in a building that must consent to a condominium conversion was greatly increased from 15% to 51%, effectively blocking all condominium conversions in the city, including the 107 Debtors’ planned conversions. The HSTPA also reduced the allowable increase in rents based on apartment and building improvements effectively making the 117 Debtors’ planned renovations similarly unprofitable.

Unfortunately, by the time the new law was passed, the Debtors had already sunk significant, borrowed money into the Debtors including through initiating construction and tenant buyouts to implement their business plans. These actions, necessarily involve affirmatively increasing apartment vacancies, decreasing current income.

Meanwhile, many tenants opposed the Debtors’ plans for the Properties, with some taking active measures to hamper the Debtors’ plans, including by being uncooperative regarding necessary, building-wide maintenance items, and joining in a rent strike. Collectively, over $500,000 is apparently being held by tenants’ counsel.

Making matters worse, the advent and continuation of the pandemic and the economic hardship it placed on many people has caused rent collections to significantly drop even further. Not surprisingly, the Debtors have been struggling."-

The Debtors own multi-family residential buildings on 107th Street and 117th Streets in Manhattan. As of the Petition date, there are several hundred tenants residing in the Debtors' properties.

According to Emerald: "Since its establishment in 2012, Emerald Equity Group has earned a strong reputation as a leader in the multifamily real estate market. The company has risen to prominence through its high-profile acquisitions, dealing with many of the leading institutions in the real estate arena and negotiating some of New York City’s largest multifamily deals in recent years. In 2017 Emerald Equity Group expaned their platform outside NYC with its acquisition of a 1,000 unit portfolio in Atlanta, GA. Emerald continued its expansion with strategic acquisitions in Dallas TX, Saint Louis MO, Columbus OH, Nashville TN and Los Angeles CA. 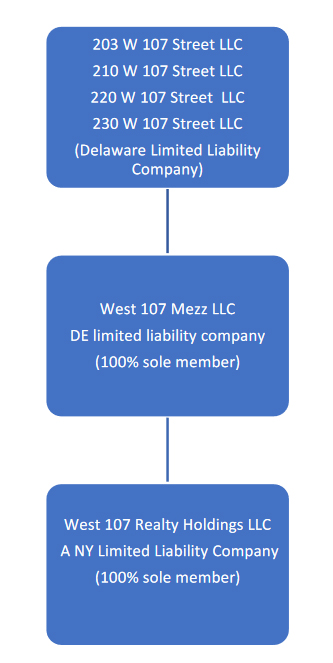