The Schedules of Unexpired Leases that were assumed, assumed and assigned, or rejected by the Debtors, are attached to the notice as Exhibit 1-A, Exhibit 1-B, and Exhibit 1-C, respectively.

In a press release announcing the emergence, 24 Hour Fitness noted, “The Company has successfully completed its financial restructuring process and has implemented the plan of reorganization confirmed by the U.S. Bankruptcy Court on December 21, 2020. The Company now has greater financial strength with an optimized cost structure and leaner balance sheet after eliminating $1.2 billion of funded debt.

A new Board of Directors has been appointed in conjunction with the emergence from chapter 11 that will help 24 Hour Fitness navigate through the next phase of its strategic plans."

The Debtors' Memorandum of Law in Support of Plan Confirmation [Docket No. 1459] states, “The Debtors commenced these chapter 11 cases in June 2020 amidst a global pandemic that had quite literally grounded their operations to a halt. For reference, these operations include hundreds of club locations, thousands of vendors and business partners, tens of thousands of employees, millions of club members and approximately $1.4 billion of prepetition debt. In response to the unprecedented challenges arising from COVID-19, the Debtors rigorously scrutinized nearly every aspect of their business and responded accordingly to preserve value and, most fundamentally, their ability to operate, grow and thrive as a going concern for the benefit of their members and their thousands of employees. These efforts have succeeded, and the Debtors now present their Plan for confirmation by the Bankruptcy Court.

The Plan itself represents months of tireless, good-faith efforts by the Debtors, the Creditors’ Committee, the Ad Hoc Group, the Debtors’ key business partners and their respective advisors to achieve the objectives of chapter 11 — facilitating a business’ reorganization as a going concern, while also maximizing value for stakeholders. These objectives are achieved through the Plan now before the Bankruptcy Court.”

The Disclosure Statement adds: "Specifically, the proposed restructuring contemplates, among others, things:

The Debtors will use the proceeds of the Rights Offering to, among other things, fund the costs and expenses of these Chapter 11 Cases and for working capital after emergence from chapter 11.

On the Effective Date, each DIP Lender shall receive, in full satisfaction of its claims pursuant to the Restructuring Transactions, its pro rata share of:

NB: Recoveries are based on a total enterprise value of approximately $538.0mn for the Debtors, together with their non-debtor affiliates.

FN: The value of the Warrants has been estimated using a Black-Scholes valuation model to be $0.3 million to $2.2 million, with a midpoint of $1.0 million.

On December 17, 2020, the Debtors’ claims agent notified the Court of the Plan voting results [Docket No. 1462], which were as follows.

In a declaration in support of the Chapter 11 filing (the “Hugo Declaration”), Daniel Hugo, the Debtors’ Chief Restructuring Officer, detailed the events leading to the Debtors’ Chapter 11 filing. The [name] Declaration provides: “But for the COVID-19 pandemic and its detrimental effects on their business, the Debtors would not be seeking the Court’s protection today. As described more fully below, the Debtors were required to close all of their fitness club locations nationwide on March 16, 2020, in accordance with governmental regulations and recommendations, and the vast majority of the Debtors’ fitness clubs remain closed today. Put simply, the COVID-19 pandemic upended the Debtors’ operating model, leaving the Debtors without a source of revenue to fund their operations. With the protection of this Court and the tools that chapter 11 provides, however, the Debtors are confident that they not only can endure the crisis that COVID-19 has presented, but also can transform and modernize their business model in a way that leads to long-term success and relevancy for the 24 Hour Fitness brand and enhances the fitness experience of their millions of loyal members.”

The Hugo Declaration provides: "The Debtors lease all of their club locations from approximately 300 different landlords. Following the closure of their fitness clubs as a result of the COVID-19 pandemic, the Debtors began to evaluate their lease portfolio to, among other things, quantify and realize the potential for lease savings. The Debtors, together with Hilco, began communicating with landlords in an effort to improve lease terms by agreement and address certain burdensome leases. Relatedly, the Debtors are requesting authority to reject approximately 135 club leases…In addition, the Debtors also have filed the Lease Rejection Procedures Motion…seeking authority to implement procedures to reject additional unexpired leases if the Debtors are unable to negotiate sufficient rent concessions to position those clubs for sustained future profitability."

In a press release announcing the filing, the Debtors advised that: “due to the disproportionate impact of the COVID-19 pandemic, the Company has voluntarily filed for relief under Chapter 11 of the U.S. Bankruptcy Code in the U.S. Bankruptcy Court for the District of Delaware. In conjunction with the Chapter 11 filing, the Company expects to secure approximately $250 million in debtor-in-possession (DIP) financing. Subject to Court approval, the DIP financing, combined with the Company’s cash from operations, is expected to provide sufficient liquidity and allow the Company to continue operations, including club reopenings, without interruption during the Chapter 11 process."

On August 3, 2020, the Court hearing the 24 Hour Fitness Worldwide cases issued a final order authorizing the Debtors to (i) access a further $200.0mn of new money debtor-in-possession (“DIP”) term loans and (ii) roll-up $250.0mn roll-up of prepetition indebtedness [Docket No. 652].

in a June 17th interim DIP order [Docket No. 136], the Debtors got the greenlight to access the first $50.0mn of what was in total a $250.0mn DIP financing package provided by certain prepetition lenders and noteholders (the “Ad Hoc Group”) which beneficially own or control the majority of the indebtedness outstanding under the Debtors’ Prepetition Credit Facility and Senior Unsecured Notes.

The expense of the DIP facility, LIBOR plus 1000 basis points, plus a stack of fees reaching well into double digits in respect of the $250.0mn of new money loans, is defended in a declaration filed in support of the financing [Docket No. 18] as "taking into account the current state of DIP financing markets and the unprecedented and ongoing impacts of COVID-19."

The Disclosure Statement [Docket No. 1233] attached the following documents:

The Revised Amended Plan [Docket No. 1478] attached the following:

The Debtors' December 18, 2020 Plan Supplement [Docket No. 1484, but see also the Plan effectiveness notice at Docket No. 1551 as to leases] attached the following:

24 Hour Fitness is one of the nation’s leading operators of health and fitness clubs. The Debtors operate out of their two headquarter locations in San Ramon, California, and Carlsbad, California. As of March 31, 2020, the Debtors served approximately 3.4million members in 445 locations across the United States, all of which are leased.

Prior to the March 2020 closure as a result of the COVID-19 pandemic, the Debtors operated in fourteen states and the District of Columbia, with 445 clubs serving approximately 3.4 million members. 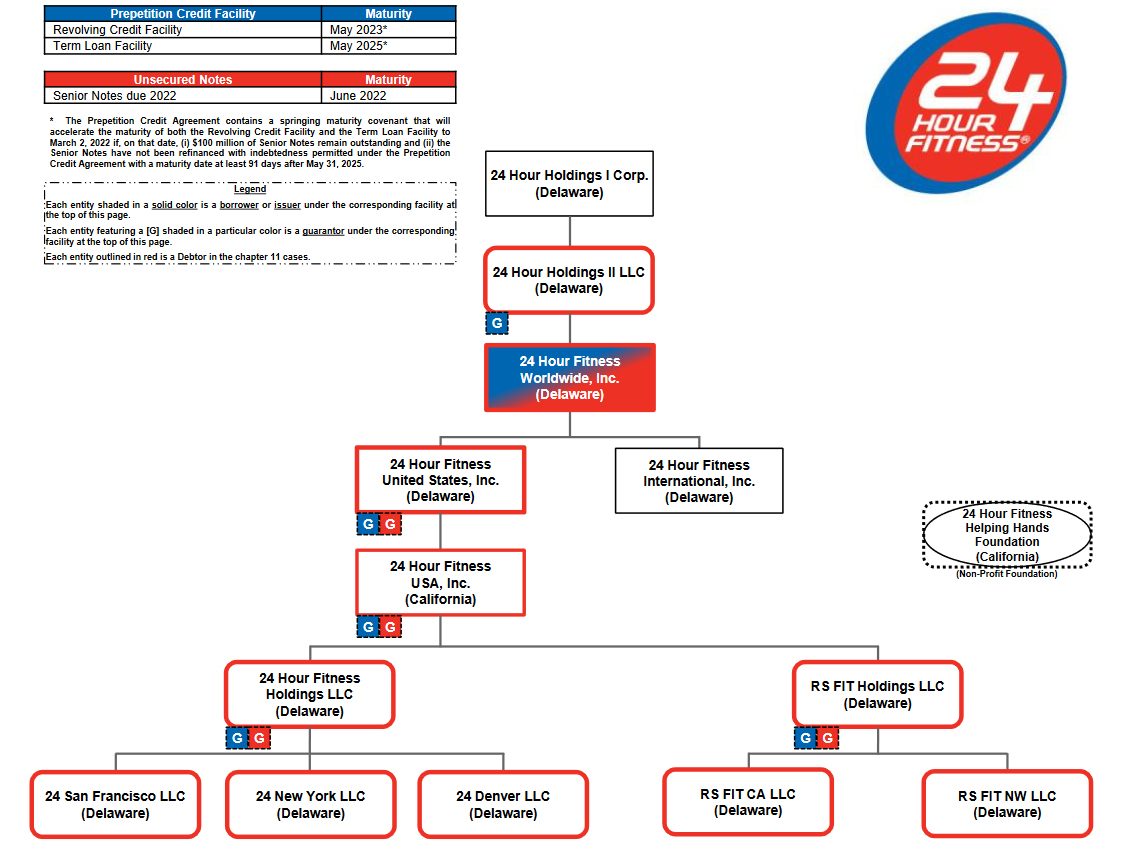 Seagate Sells $1B Worth of Senior Notes