December 13, 2021 – The Court hearing the Advantage Holdco cases confirmed the Debtors’ Second Amended Plan of Liquidation (filed in conjunction with their Official Committee of Unsecured Creditors, or the “Committee,” and together with the Debtors, the “Plan Proponents”) [Docket No. 1079]. The Debtors also filed an amended Plan Supplement [Docket No. 1076] which attached a Liquidating Trust Agreement that has been amended to reflect the resolution of an objection filed by the U.S. Trustee.

On December 9, 2021, in advance of their December 10th Plan confirmation hearing, the Plan Proponents had filed a Second Amended Combined Plan of Liquidation and Disclosure Statement (the “Combined Document”) [Docket No. 1068] and separately filed a blackline showing changes to the version filed on October 26, 2021 [Docket No. 1069].

On May 26, 2020, privately held Advantage Holdco, Inc. and six affiliated Debtors (dba Advantage Rent a Car, “Advantage” or the “Debtors”) filed for Chapter 11 protection with the U.S. Bankruptcy Court in the District of Delaware, lead case number 20-11259. At filing, the Debtors, the fourth largest car rental company in North America, noted estimated assets between $100.0mn and $500.0mn; and estimated liabilities between $500.0mn and $1.0bn.

The dramatic fall of the car rental group, the collapse of an almost completed sales transaction at the outset of the pandemic and the subsequent inability to re-ignite any sort of meaningful interest amongst potential suitors…all comes down to a business strategy that was particularly out-of-step with a post-pandemic world, with the Debtors summing up at filing: "The Debtors’ business was particularly hard-hit by the decline in air travel, since most of their rental locations were located at airports."

The Debtors are owned by affiliates of Canadian private equity investment firm Catalyst Capital Group Inc. which acquired the Debtors in April 2014.

The following is a summary of classes, claims, voting rights and expected recoveries (defined terms are as defined in the Combined Document; see also the Liquidation Analysis below):

On December 8, 2021, the Debtors' claims agent notified the Court of the Plan voting results [Docket No. 1058], which were as follows:

On November 24, 2021, the Debtors filed a Plan Supplement [Docket No. 1035], which attaches the following exhibits:

In a May 29th bidding procedures motion [Docket No. 69], the Debtors sought an expedited auction and sale in what they called a “final effort to provide value to their stakeholders.” The Debtors efforts to market concession agreements go back as far as 2018; and on March 12th, an “imminent deal” in respect of 15 of the Debtors’ airport locations was derailed when a strategic buyer pulled out of that transaction citing the “severe and devastating industry-wide decline in rental demand” inflicted by COVID-19.

The Debtors’ motion states: “The Debtors’ primary assets are certain concession agreements with airport authorities or other supervising governmental entities (the ‘Concession Agreements’), which agreements permit the Debtors to operate out of various airports located across the United States.

In a declaration in support of the Debtors' Chapter 11 petitions (the "Farrell Declaration" [Docket No. 15]), Alfred C. Farrell, the Debtors' chief restructuring officer, explained, "The Company has fixed costs (including airport costs), borrowing costs to fund the Company’s fleet and high transaction costs for obtaining and processing customer reservations. This, combined with the fact that the Debtors are dependent on air travel, are a leisure/discount car rental brand in an extremely competitive market and its target clientele has embraced ride sharing alternatives to renting cars, has resulted in increased competition, tightened liquidity and declining cash as the Company’s revenues came to a halt.

Perhaps, most important, the COVID-19 pandemic has negatively impacted the financial performance of the Debtors by reducing revenue to substantially zero, in much the same way as it has impacted its competitors… Worse yet for the Debtors, the pandemic caused the scuttling of a transaction with a strategic purchaser which would have returned significant value to their stakeholders. In March 2020, after months of negotiation, the Company neared an agreement with a potential strategic buyer (the 'Strategic Purchaser') to serve as a stalking horse bidder for 15 of the Debtors’ airport locations. The Debtors believed the transaction with the Strategic Purchaser would benefit creditors and allow airports and travelers new service choices. Unfortunately, on the eve of a deal, the government and public’s response to the pandemic ravaged the industry (as discussed more fully below), and, on March 12, 2020, the Strategic Purchaser informed the Debtors that it would be unable to proceed with the transaction.

The Debtors were also in discussions with a number of other parties to acquire additional airport concession agreements that were not included in the Strategic Purchaser’s bid and were to provide additional value. These parties also broke off their negotiations once the government’s travel restrictions were imposed. The pandemic exacerbated the Debtors’ liquidity issues and left car rental companies almost overnight with a decline of more than 95% of previous revenues. Government mandated travel restrictions, including the closure of the United States border in March 2020 and stay-in-place orders, together with growing social isolation and travel-related fears, brought domestic and international travel to a near-halt. Our business was particularly hard hit by the decline in air travel since most of our rental locations are located at airports… Since late March there has been virtually no revenue at some of our locations even though they have remained as an essential business.

The Debtors, like other car rental companies, have experienced devastating declines in their bookings, combined with an increase in cancellations, leaving the business bereft of the cash necessary to continue operating. In addition, to decreased rentals, the Debtors have incurred additional unforeseen expenses. In certain locations, lower car rental demand has resulted in airport parking lots at capacity requiring the Company (and other rental companies) to rent additional off-site parking to store vehicles. In addition, the maintenance for return vehicles has become more costly as safety and cleanliness standards have increased to avoid the spread of COVID-19. While the Debtors have taken steps to preserve liquidity, including reducing its workforce and auto fleet, the unprecedented challenges presented by COVID-19 have battered the Debtors’ financial and operational performance to the point that continuing as a going concern is in question.

Funds affiliated with Catalyst provided the necessary liquidity to allow the Debtors to operate through the crisis. Catalyst supported the Company’s efforts to revive the sale to the Strategic Purchaser which would have provided value to stakeholders. But, as this crisis continued and seems likely to continue for a prolonged period of time, the Debtors’ renting only a nominal number of cars and it being impossible to predict when airport traffic might return to pre-pandemic levels, bankruptcy became necessary.

Before commencing these chapter 11 cases, the Debtors engaged Matthew Pascucci, a senior managing director, of Mackinac Partners as their Chief Restructuring Officer. In this capacity, Mr. Pascucci assessed the Debtors’ operations and their prospects. Once he concluded the business was severely challenged, the Debtors approached Catalyst to provide financing to support a marketing and sales effort. Catalyst expressed a willingness to advance the requested funding but only in the form of debtor-in-possession financing. Consequently, the Debtors, who have little remaining cash on hand to fund their operations, have no choice but to seek relief under the Bankruptcy Code as a means to preserve its valuable Airport Concession Agreements and maximize the value of their estates for the benefit of all stakeholders."

The Debtors’ main prepetition obligations consisted of three categories of financing and leases (which, in the aggregate, equaled $532.6mn as of the Petition Date, principal only): (1) Vehicle Facilities, (2) Other Loans, and (3) Sponsor Debt (ie Catalyst debt): 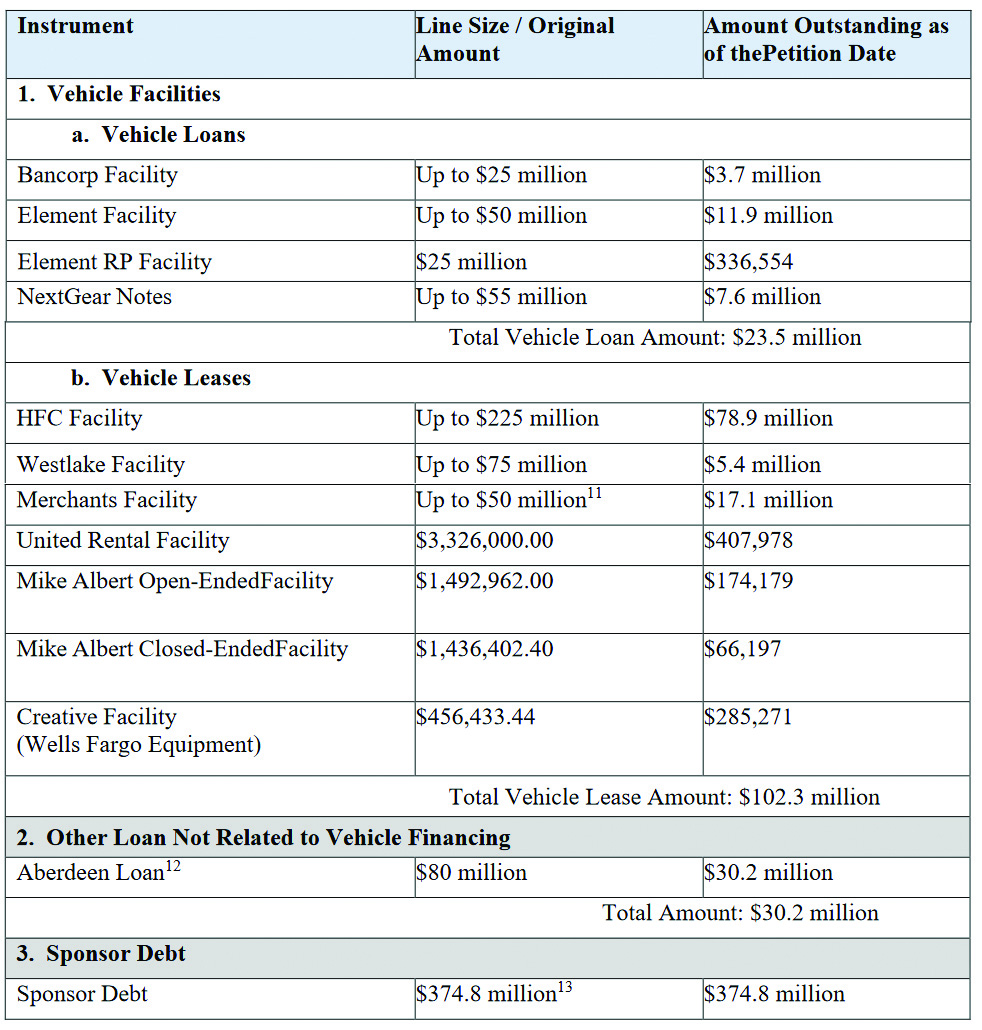 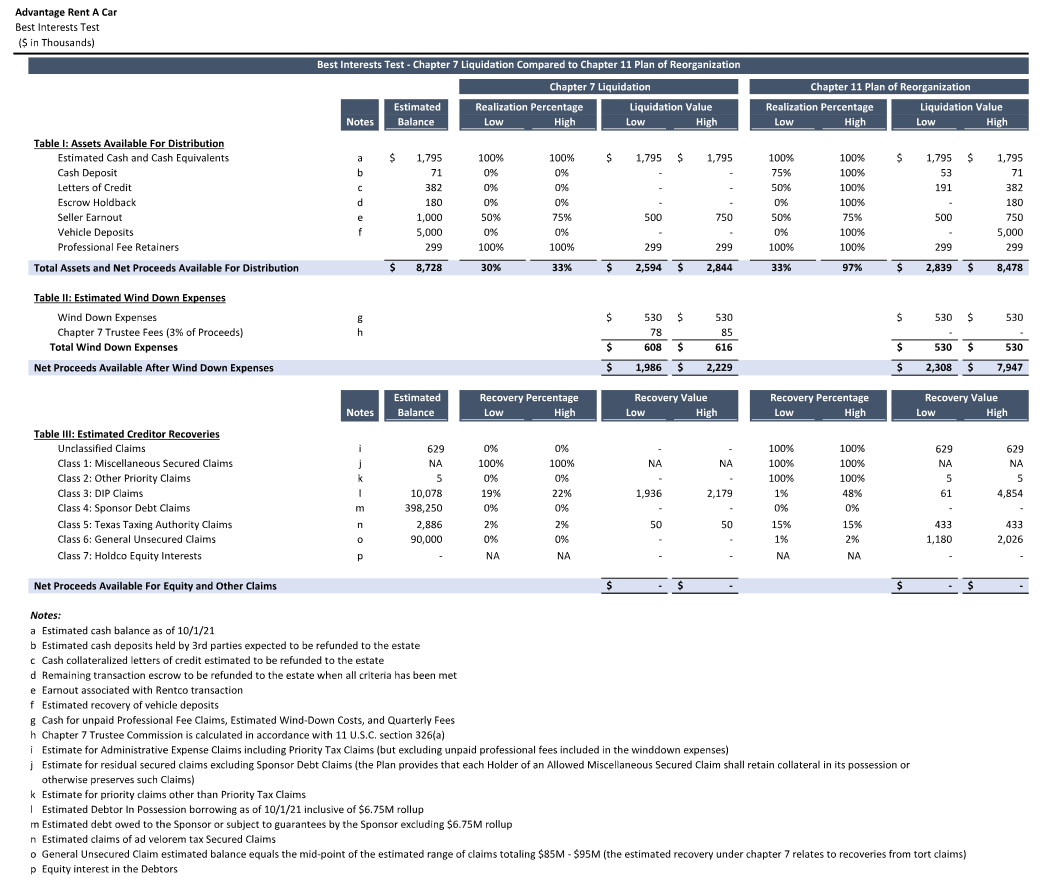 Advantage is the fourth largest car rental company in North America, with 40 airport locations across the United States, in 21 of the top 25 largest airports by passenger traffic. 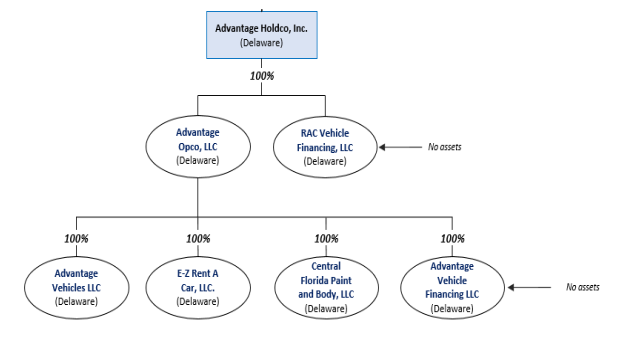