August 31, 2021 – The Court hearing the AeroCentury cases confirmed the Plan element of the Debtors’ Combined Plan and Disclosure Statement (the “Combined Document”) [Docket No. 296].

On March 29, 2021, AeroCentury Corp. and two affiliated Debtors (NYSE: ACY; “AeroCentury” or the “Debtors”) filed for Chapter 11 protection with the U.S. Bankruptcy Court in the District of Delaware, lead case number 21-10636. At filing, the Debtors, providers of leasing and finance services to regional airlines worldwide noted estimated assets between $100.0mn and $500.0mn; and estimated liabilities between $100.0mn and $500.0mn. In a subsequently filed Schedule A/B, the lead Debtor noted $105.8mn of assets and $83.3mn of liabilities [Docket No. 91].

After attempting to address prepetition credit facility defaults, an effort that was significantly impacted by the onset and continuance of COVID-19-related restrictions, the Debtors entered Chapter 11 with plans to sell their core assets (which primarily consisted of aircraft) to pay off prepetition loan debt and then restructure around their remaining assets through a Chapter 11 Plan. At filing, the Debtors noted: "AeroCentury intends to remain a public company focusing on the regional aircraft industry. With a clean balance sheet, we will be primed for immediate execution of a recapitalization plan that will allow us to resume and build upon our asset leasing, finance and management business."

Those filing date objectives have remained largely unchanged throughout, with the Court having now approved a $83.5mn sale of substantially all of the Debtors’ assets to credit bidding prepetition lender Drake Asset Management Jersey Limited (see "Asset Sale," below) [Docket No. 172]. The Debtors did ultimately succeed in their search for a Plan sponsor (see just below) and a going concern solution, albeit without their fleet of aicraft (but with an apparent interest in building anew with funding from Chinese investors and largely still under pre-bankruptcy management). Even with the plan sponsor, however, the Plan envisages a "toggle" to "the Stand-Alone Plan, whereby the Debtors’ remaining Assets will vest in the Post-Effective Date Debtors and be monetized by the Plan Administrator." The Debtors had previously noted that they would toggle in the event they did not find a Plan sponsor, so the fact that the toggle remains with a Plan sponsor may suggest some continuing risk as to that selected Plan Sponsor, ie Yucheng Hu, Hao Yang, Jing Li, Yeh Ching and Yu Wang who have together agreed to invest $11.0mn in the Debtors.

Although "Plan Sponsor" is defined as the four individuals above, the Plan Sponsor Agreement is signed by 9 individuals with Yucheng Hu as the "lead investor" and purchasing more than half of the equity being made available to the group. Seven of the remaining investors are purchasing equity which suggests investments just above the EB-5 visa requirement of $500k although if this is in fact an EB-5 visa-driven investment, there is no specific reference to that fact in the Plan Sponsor Agreement (or term sheet) or the Plan-related documents.

Immediately following Plan effectiveness, the debtors' board will be comprised of Christopher Tigno, Michael Magnusson and Harold Lyons, each existing members of management. It is estimated that, after giving effect to transactions anticipated by the Plan Sponsor Agreement, 65.0%-74.0% of the emerged common stock will be held by the Investors and 26.0%-35.0% held by legacy shareholders.

The Memorandum provides the following pre-Plan confirmation hearing summary: "The Combined Disclosure Statement and Plan provides for a toggle between the (i) the Sponsored Plan, which pursuant to the terms of the Plan Sponsor Agreement, the Debtors and the Plan Sponsor will agree to a restructuring of the Debtors’ business that will be implemented through the Sponsored Plants and (ii) the Stand-Alone Plan, whereby the Debtors’ remaining Assets will vest in the Post-Effective Date Debtors and be monetized by the Plan Administrator.

On May 28th, the Court hearing the AeroCentury Corp case issued an order approving the $83.5mn sale of substantially all of the Debtors’ assets to Drake Asset Management Jersey Limited (“Drake” or the “Stalking Horse Bidder”) [Docket No. 172]. An executed version of the Drake APA was attached to the order.

Consideration for the purchase is comprised of approximately $83.5mn of credit bid senior debt (“the amount of outstanding Secured Obligations pursuant to the Mortgage and Loan Agreement” as at the sale closing date).

Drake is an affiliate of (“Falko”) one of the world’s largest aircraft asset management companies (275 regional jet and turboprop aircraft worth over $2.0bn acquired since 2011 and over $1.0bn in 2019)

On October 30, 2020, Drake purchased all of the indebtedness (approximately $87.9mn, of which $83.2mn is principal) held by the Debtors’ then prepetition senior lenders (the “MUFG Lenders”) as well as the swap termination payments owed with respect to such indebtedness. In December 2020, Drake purchased three aircraft from ACY E-175, LLC (“E-175”), a special purpose entity owned by the Debtors, and leased to Republic Airways. Drake now intends to credit bid the totality of the acquired senior debt for the Debtors’ 12 remaining aircraft, 10 (all Bombardier) of which serve as collateral in respect of that debt.

Voting ResultsOn August 26, 2021, the Debtors' claims agent notified the Court of Plan voting results [Docket No. 281] which were as follows:

The Debtors' prepetition capital structure consists of the following:

Debtor AeroCentury Corp. is a publicly traded company. Toni M. Perazzo is the only individual or entity that owns more than 10% of the equity ownership interests in AeroCentury, owning 21.2% of AeroCentury’s outstanding common stock. 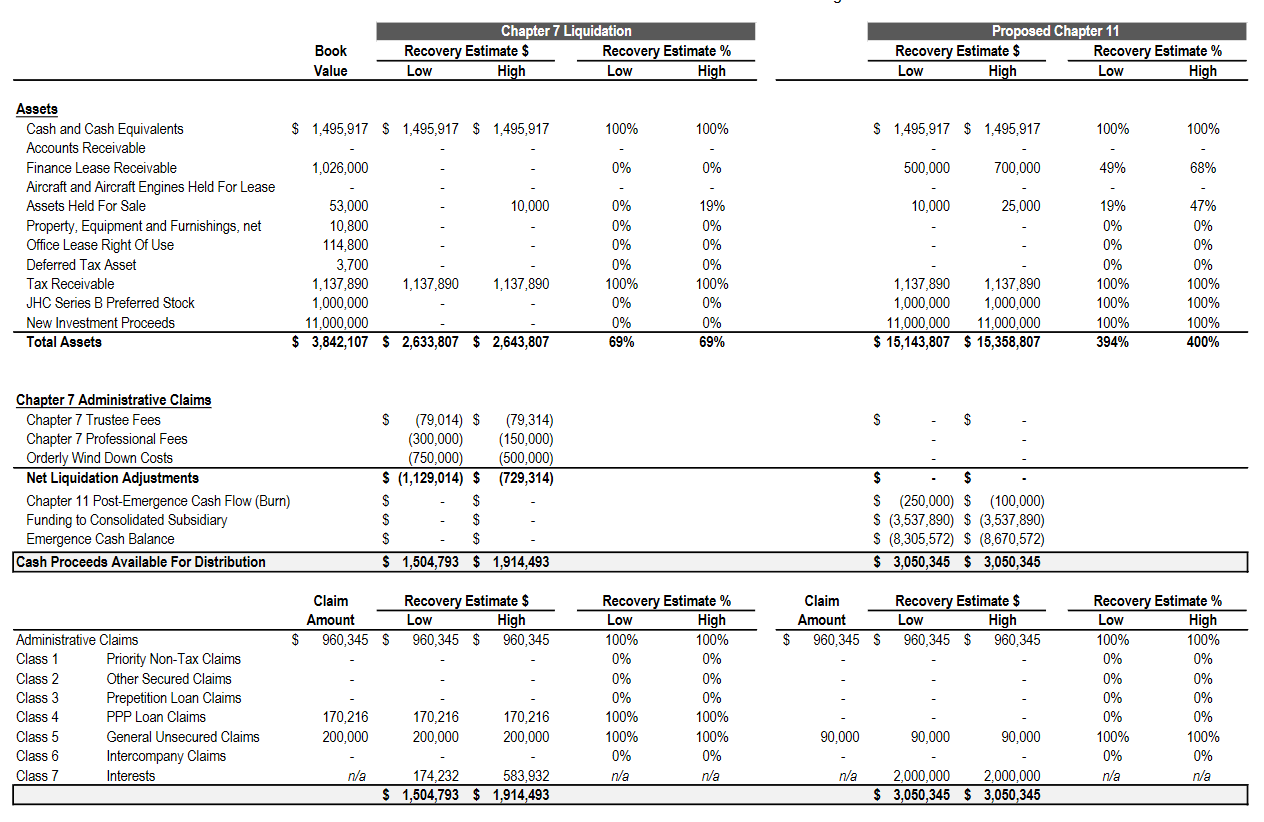 According to the Debtors: “The Debtors are engaged in the business of investing in used regional aircraft and leasing the aircraft to foreign and domestic regional air carriers. The Debtors’ principal business objective is to acquire aircraft assets and manage those assets in order to provide a return on investment through lease revenue and, eventually, sale proceeds. The Debtors strive to achieve this objective by reinvesting cash flow from operations and using short-term and long-term debt and/or equity financing. The Debtors believe their ability to achieve this objective depends in large part on their success in three areas: (i) asset selection and acquisition, (ii) lessee selection and (iii) obtaining financing to acquire aircraft and engines. 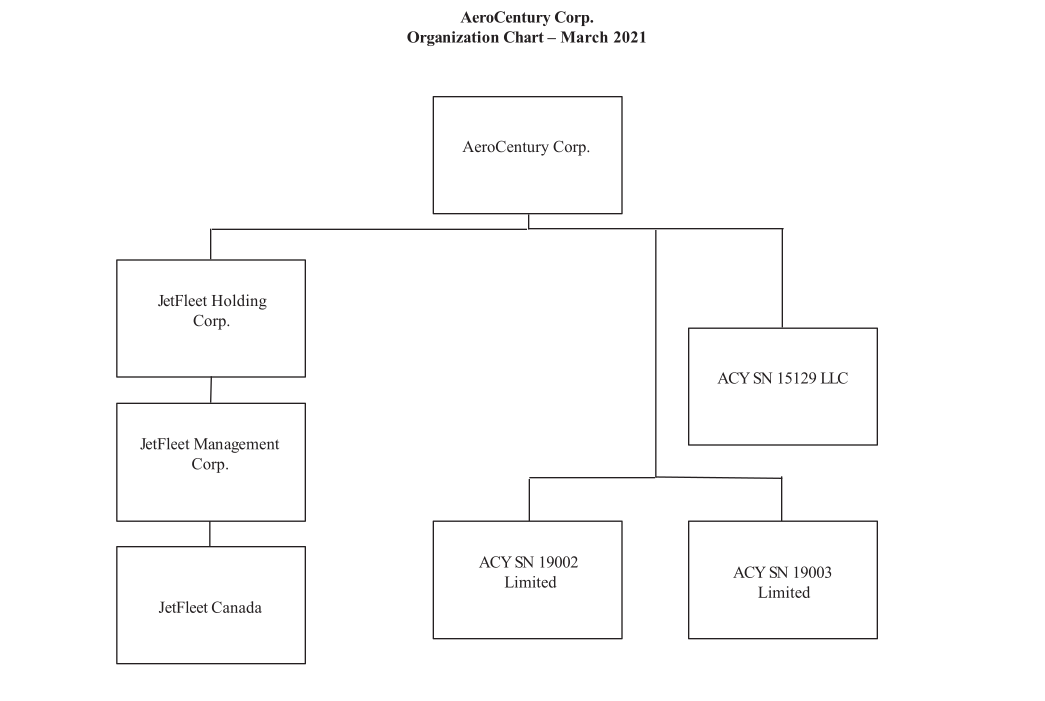