April 18, 2022 – The Debtors' Official Committee of Unsecured Creditors (the “Committee”) filed a motion to dismiss the Debtors’ Chapter 11 cases or alternatively convert the cases to Chapter 7, arguing that notwithstanding their "important assistance…[in] the extremely successful sale of substantially all of the Debtors’ assets," the Debtors and their prepetition senior secured lenders subsequently shut them out of the Plan development process and any sort of recovery [Docket No. 665]. The current Plan is a bait and switch, the Committee argues, with the Debtors (at the behest of lenders) filing a new Plan after they raised issues as to the adequate funding of a proposed litigation trust. Without funding to pursue retained claims and causes of action, including against Castleman Power Development, LLC, and to adequately fund Plan administration, the cases are "essentially a sham to make it appear that general unsecured creditors will benefit from the plan."

On April 8, 2022, the Debtors filed a Combined Plan and Disclosure Statement (the “Combined Document”) [Docket No. 647].

The motion explains, “With the important assistance of the Committee, the Debtors’ main stated goals of the bankruptcy filing have been reached, including the extremely successful sale of substantially all of the Debtors’ assets (for a purchase price many millions of dollars higher than the stalking horse bid) and a settlement with their most material mechanic’s lien holder ProEnergy. So far, as a practical matter, the Chapter 11 Cases have been run primarily for the benefit of the Prepetition Senior Secured Lenders. The Committee vigorously supported and assisted with the overall marketing and sale process towards the collective goal of maximizing the value of and recovery from the Debtors’ businesses and assets, which was in all stakeholders’ interests.

Now that the successful sale has been consummated, the Prepetition Senior Secured Lenders have caused the Debtors to file a liquidating plan that will provide them, and no other creditors, with substantial benefits. The plan will provide for a distribution of remaining funds to the secured creditors, fund a wind-down to address post-closing issues for their benefit, and provide other benefits including estate and third party releases and exculpations for the Prepetition Senior Secured Lenders, notwithstanding that general unsecured creditors will almost certainly receive nothing under the plan. While the plan also contemplates that Hugh Smith Advisors LLC (the current CRO) will be the Plan Adminstrator and will retain and pursue the Retained Claims and Causes of Action, the funding in the amount of $533,750 to be provided to the Plan Adminstrator is not sufficient to administer the claims, wind down the Estates and properly investigate and pursue the Retained Claims and Causes of Action. Rather than provide meaningful funding, which is customary, the Prepetition Senior Secured Lenders’ position has been that no funding is necessary because contingency counsel can be hired to pursue the claims. Without any funding, however, the pursuit of the Retained Claims and Causes of Action is essentially a sham to make it appear that general unsecured creditors will benefit from the plan.

The current Plan was filed after a different plan draft had been provided by the Debtors to the Committee, which created a litigation trust to pursue claims and causes of action for the purported benefit of unsecured creditors. When the Committee raised concerns that the litigation trust had no funding to pursue such claims and causes of action, the Debtors and the Prepetition Senior Secured Creditors shut off all communication with the Committee and filed the instant Plan.

As the Prepetition Senior Secured Lenders are aware, the Committee, in conjunction with the Debtors’ special litigation counsel, have been investigating potential causes of action and claims against Castleman Power Development, LLC (which since January 2018, had provided certain project management services to the operating Debtors), other entities affiliated with Ryan Castleman, and other third parties. Because of the inadequate carveout provided to Committee professionals by the Prepetition Senior Secured Lenders, such investigation is in its nascent stage and has not progressed to the point that contingency counsel can be considered to prosecute such claims. Without meaningful funding for administration of the Estates and further investigation of the causes of action there is little reason to believe that the Plan Administrator will be able to retain any professionals willing to serve as contingency counsel.

Given the Bankruptcy Code’s goal of fair, ratable recovery for creditors, a chapter 11 case should not be completely run for the benefit of the secured creditor in a case. Here, the Prepetition Senior Secured Lenders have greatly benefitted from a going concern sale result that could not have been achieved outside of a chapter 11 process and will be the only parties to benefit by confirmation of a plan rather than a dismissal or conversion of the case to chapter 7. Rather than allowing reasonable funding for the Plan Administrator Expense Reserve so that there is a reasonable, equitable pathway for general unsecured creditors to obtain some recovery, the Prepetition Senior Secured Lenders are interested in only providing window dressing of a viable plan. With no meaningful funding, it is effectively a non-starter, thus leaving general unsecured creditors with no real prospect of any recovery whatsoever under the Plan.FN

FN: The Plan estimates recovery of the General Unsecured Creditors (Class 5) to be 0%-1%. See Plan, at Article VI, section 6.3.

On February 9, 2022, the Court hearing the Agilon Energy Holdings II case issued an order approving the sale of substantially all of the Debtors’ assets (i.e., its pair of Texas power plants) to TXCR Acquisition Co., LLC a Texas limited liability company (“Buyer”) for a purchase price of $75.5mn [Docket No. 511].

The Debtors had filed an Amended Asset Purchase Agreement (the “APA”) and a related redline showing changes against the version filed on February 7, 2022 [Docket No. 507]. Notable amongst changes is the return of a $75.5mn cash purchase price, that amount having been announced by the Debtors as comprising the winning bid on February 3rd only to be replaced by $67.4mn in the APA filed by the Debtors on February 7th. Curiously, the escrow deposit remains 10th of the lower amount, i.e., $6,740,840.

In a declaration filed in support of the Debtors’ first day filings [Docket No.42], the Debtors provide: “During the construction of the Facilities, certain disputes arose that increased costs and delays in bringing the Facilities online. These delays contributed substantially to the Debtors’ inability to timely generate revenues, resulting in the occurrence of defaults under the Debtors’ prepetition financing agreements. Although the Facilities became commercially operational, additional maintenance issues with the refurbished combustion turbines resulted in additional delays and expenses.

In light of these circumstances, the Debtors began exploring debt restructuring options with the Prepetition Secured Parties. The Debtors were making progress toward resolving their operational issues when, in February 2021, an extraordinary cold weather event occurred in  Texas. The Debtors’ combustion turbine engines were isolated from the ERCOT grid at one facility due to a transmission outage and faced operating constraints due to the extreme low temperatures. Unable to generate all of the electricity contractually obligated to provide during  the cold weather event, the Debtors were forced to incur additional liabilities for a large amount of purchased power, which led to the termination of the Debtors’ supply and purchase agreements  and, ultimately, to the filing of these chapter 11 cases.”

The declaration [Docket No. 42] provides: “The Debtors are in the business of providing gas-fired peaking electric energy to the ERCOT market. The Debtors own and operate two power facilities located near Victoria, Texas: Victoria Port Generation Station (‘Victoria Port Facility’) and Victoria City Generation Station (‘Victoria City Facility’ and together with Victoria Port, the ‘Facilities’). When fully functional, the Facilities have a total nominal capacity of 172 Megawatts. The Facilities each incorporate two refurbished LM6000 aero-derivative combustion turbines and associated generators manufactured by General Electric.”

Together Castleman and the Debtors have a business model which specifically leverages the unique power generation regulatory environment in Texas, with Castleman providing a useful summary of this now notorious ERCOT-regulated environment and specifically heralding the opportunities presented by the equally notorious $9,000/MWh incentive for energy producers to be on stand-by to fill holes in Texas’s “intermittent renewable generation.”

From Castleman: “ERCOT is not synchronously connected to the rest of the U.S. power grid and as a result is not subject to oversight by the Federal Energy Regulatory Commission (‘FERC’), but is instead regulated by the Public Utility Commission of Texas (‘PUCT’) and the Texas Legislature

Another unique feature of the ERCOT market design is the energy-only market structure which does not have bifurcated energy and capacity markets as most of other organizes regional transmission organizations (‘RTOs) within the US.

As a result of the energy-only structure, real-time prices are allowed to spike up to $9,000/MWh to incentivize new generation…Natural gas is the marginal fuel in ERCOT and accounts for over 44% of generation, followed by coal, which represents 25% of generation

ERCOT has the largest amount of installed intermittent renewable generation (more than 24 GW of combined installed wind and solar resources)…The wind penetration record is 56% of load, which was achieved in January 2019…”

Further explaining the Debtor’s niche market, CEO Ryan Castleman notes: “The two plants will provide power during peak demand, specifically during hot summer days and cold winter days….About half the state’s power comes from the wind…but how much power the wind generates can’t be controlled. They (the plants) come on when the wind is not blowing, there is so much wind power in Texas. There has to be something that comes on when the wind does not blow. The plants will operate during about 10 percent of the year during times of market scarcity.”

The Debtors’ organizational structure [Docket No. 647] is as follows: 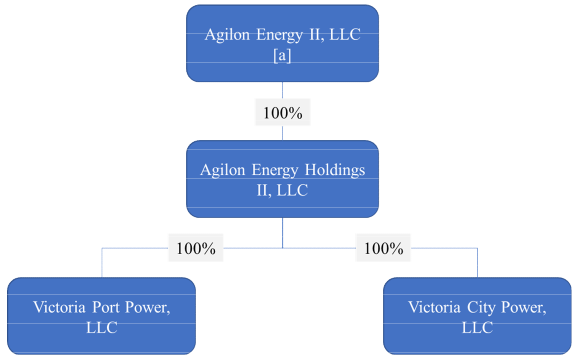 V.F. Corporation Acquires Supreme for $2.1B