Altamont Capital holds a 40% interest in the Debtors acquired in June 2018.

Goal of the Chapter 11 Filings

In Court filings, the Debtors note that on February 16th they had entered into restructuring support agreement in support of either (i) an in-court section 363 sale process or (ii) an out-of-court restructuring (in either case a "Strategic Transaction") with League Holdings, LLC, Thunderbird Brothers LLC, ACP Alamo Finance, Inc., CF ALMO UST LLC (an affiliate of Fortress Credit Corp. or “Fortress”), and CF ALMO UB LLC (collectively, the "RSA Parties"). The choice of a sale process has now seem to have been made.

In a declaration in support of the Chapter 11 filing (the “Vonderahe Declaration”), Matthew Vonderahe, the Debtors’ Chief Financial Officer, detailed the events leading to the Debtors’ Chapter 11 filing. The Vonderahe Declaration provides: “The Company’s main business segment is operating a leading dine-in theater chain with multiple revenue earnings streams as both an operator and franchisor. The Company operates 18 company-owned dine-in theaters across 9 markets, and 23 franchised dine-in theaters in 13 markets….in response to the rapidly spreading COVID-19 pandemic and governmental shutdown mandates rolling out across various states for theater and indoor dining businesses, by March 25, 2020, Alamo had closed all of its theaters…"

The Debtors have lined up debtor-in-possession ("DIP") financing to be provided by the RSA Parties with Fortress to serve as administrative agent. The DIP financing is comprised of (i) a $20.0mn new money multi-draw term loan facility (the "DIP Term Loan"), with up to $7.0mn available upon the entry of an interim DIP order, and (ii) upon issuance of a final DIP order, a roll up of up to $40.0mn of the obligations under the Debtors' Prepetition Credit Facility (the "Roll-Up Loans") on a pro rata basis according to the term loan holdings under the DIP Facility. For the DIP Term Loan, the Debtors have agreed to an interest rate of 15.0% per annum, to be paid in kind, and for the Roll-Up Loans, an interest rate of 4.5% per annum. In addition, the Debtors have agreed to pay to the Postpetition Agent a closing fee in an amount equal to $50,000, (the “Agent Fee”) and an upfront fee of 2.0% on the principal amount of the "DIP Loans" which includes the $40.0mn of Roll-Up Loans.

Interest accrues on the term and development loans at either LIBOR plus the Applicable Margin, as defined in the Prepetition Credit Agreement, or the Base Rate, which is the higher of (i) Prime Rate, (ii) Federal Funds Rate plus 0.5%, or (iii) LIBOR plus 1%, plus the Applicable Margin. Interest is payable at the end of selected interest periods of one, two, three, or six months for LIBOR loans, but no less frequently than quarterly.

The Vonderahe Declaration states: "Tim and Karrie League founded Alamo Drafthouse Cinema in 1997 in Austin, Texas, converting a parking garage into a one-screen theater. League sold his majority stake in the franchise company to investor Dave Kennedy in 2004 to focus on the local Austin market theaters as well as develop the related businesses: Fantastic Fest, Rolling Roadshow and Mondo Tees, LLC (“Mondo”), a collaboration with major artists and studios to produce licensed posters, soundtracks, toys, apparel, books, games, and collectibles. Meanwhile, Alamo began expanding outside the Texas market, first in Virginia in 2009. When League re-acquired a stake in the company and returned as CEO in 2010, he oversaw  Alamo’s expansion over the next decade in Arizona, California, Colorado, Minnesota, Missouri, Nebraska, New York, North Carolina, and multiple cities in Texas. In January 2018, Alamo purchased all membership interests in Mondo. Today, Alamo stands as the largest privately held  movie theater business in North America, located in 22 markets with 18 company-operated theaters with 132 screens, and 23 franchise-operated theaters with 187 screens, and Mondo serves as a critical revenue stream for the Company. The movie-going and superior dining experience that Alamo provides its customers is widely acclaimed.

In connection with the Recapitalization, the Company acquired Debtor Alamo Satown, LLC, which operated four franchise locations and franchise development rights, from BACH Holdings, LLC (“BACH”) in exchange for $2.8 million of Class B Common Units in Holdings and $18.9 million in cash, subject to an agreed upon working capital adjustment. 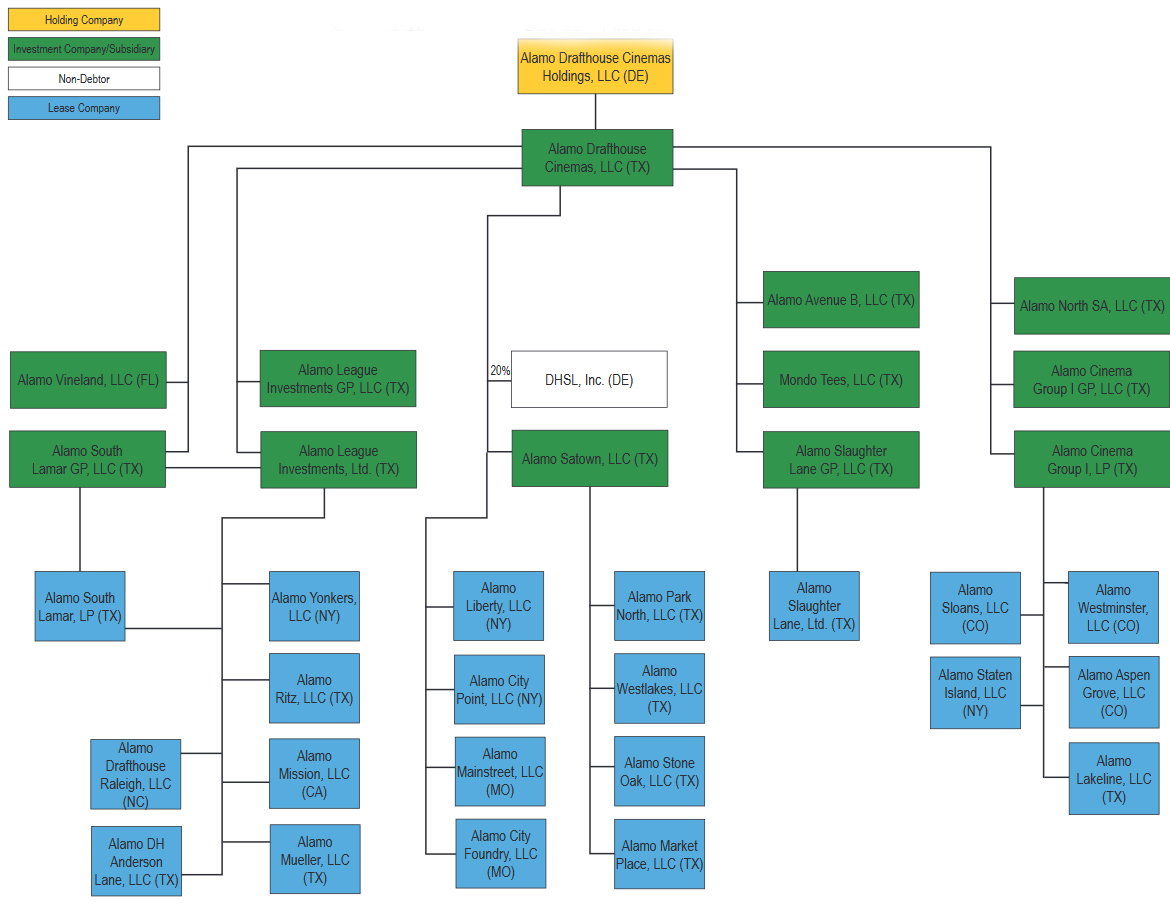 According to the Debtors: “'The Alamo Drafthouse Theater is good food, good beer and good film, all at the same place!'

That’s how we described ourselves in 1997, and that mission hasn’t changed and will never, ever change. For over two decades we’ve worked to make the Alamo Drafthouse experience the best cinematic experience in the world."