In a press release announcing the filing, Alex and Ani  stated: "[t]he Company has entered into a Restructuring Support Agreement ('RSA') with its debt holders and equity sponsors regarding a comprehensive financial and operational restructuring.

Contemporaneously with the Chapter 11 filing, the Company commenced a marketing process, pursuant to which parties will have the opportunity to submit competing bids for the purchase of the Company's assets.  At the same time, the Company's lenders and equity sponsors have agreed to the terms of a comprehensive standalone restructuring that will serve to ensure go-forward operations remain intact.

Alex and Ani has taken significant steps toward financial health through realignment of sales channels, reducing retail footprint, and reductions in capital expenditures and working capital.

Alex and Ani intends to continue operating its currently open stores and its website as usual during the court-supervised process."

The Trabucco Declaration (defined below) provides: “Alex and Ani commences these chapter 11 cases to deleverage its balance sheet and continue as a going concern with the support of 100 percent of its first, second, and third lien lenders, and 100 percent of its equity holders."

The Debtors, majority shareholder Lion Capital and the Debtors' founder Carolyn Rafaelian (through entities controlled by her, the "Rafaelian Entities") have entered into a restructuring support agreement (the “RSA,” attached to Docket No. 17 as Exhibit A) which contemplates, inter alia, a standalone restructuring and dual-track marketing process, supported by consensual access to cash collateral. During the course of negotiating the RSA, the Debtors, Lion Capital, and Ms. Rafaelian (collectively, the “Support Parties”) negotiated a comprehensive settlement agreement of all outstanding disputes (the “Settlement”). The Settlement, as incorporated into the RSA, provides for, inter alia: (a) Ms. Rafaelian’s sale of her 35 percent interest under the Second Lien Credit Facility to The Bathing Club LLC (the “Purchaser”); (b) Lion Capital’s sale to Purchaser of 35 percent of the face amount of the first lien obligations under the First and Third Lien Credit Agreement; (c) the dismissal and withdrawal of certain outstanding litigation with prejudice; and (d) mutual releases.

So, who is the Purchaser? The RSA stipulates that notices are to be sent to Mark Geragos at law firm Geragos & Geragos, a litigation boutique renowned for its representation of celebrity clients (he is quoted in respect of client/rapper Chris Brown  "[he is] like a son and an annuity [to me]") and which formerly represented Ms Rafaelian and the Rafaelian Entities. Ms Rafaelian is also, thanks to introductions by Mr Geragos, involved in a number of projects/investments with rap/hip-hop entrepreneurs (eg partnership with with Ice Cube's BIG3).

The key terms of the restructuring are as follows:

The Trabucco Declaration provides on the Debtors' nascent sales process: "The Debtors’ financial advisor, Portage Point Partners, LLC ('Portage Point'), began a marketing process on the Petition Date. The Debtors developed a list of approximately 165 parties whom they believe may be interested in, and whom the Debtors reasonably believe would have the financial resources to consummate, a Sale. The list of parties includes both strategic and financial investors (collectively, the 'Contact Parties'). As of the date hereof, the Debtors will distribute a teaser to the Contact Parties and expect to execute confidentiality agreements with certain Contact Parties in the next few days. Portage Point and the Debtors will work with all interested parties and any additional parties to provide all diligence and will continue to actively seek potential interested purchasers." The Debtors bidding procedures notes an anticipated auction date of August 15, 2021.

The Debtors are party to approximately 74 leases for stores across the United States, Canada, and Puerto Rico. Approximately 25 of the Debtors' leased locations are currently closed as a result of the COVID-19 pandemic. The Debtors' "brick-and-mortar segment generally has been unprofitable since early 2020 due to the industrywide challenges faced by brick-and-mortar stores."

The Company leases all of its store locations and offices, including its combined headquarters and distribution center in East Greenwich, Rhode  Island. The aggregate annual occupancy costs of its current lease footprint is approximately $12.7mn.

The Trabucco Declaration adds: "Before the Petition Date, the Debtors' management team and advisors undertook an extensive analysis of the Company’s existing store footprint to determine if (and how many) stores the Company should permanently close in connection with its broader financial and operational restructuring initiatives. The Debtors ultimately determined that it was advisable to permanently close 37 store locations that the Company determined in its business judgment were unprofitable under the current lease terms, including 12 store locations for which the applicable lease had terminated or expired as of the Petition Date and an additional 25 store locations that were closed as of the Petition Date. The Debtors will file a motion seeking authorization to reject certain leases in connection with the store closings…"

The Debtors have "maintained a robust and interactive online presence over the last several years. Today, approximately 45 percent of the Company’s total sales originate through e-commerce. Online sales are conducted primarily through the Company’s brand-specific website, alexandani.com."

In a declaration in support of the Chapter 11 filing (the “Trabucco Declaration ”), Robert Trabucco, the Debtors’ Chief Restructuring Officer, detailed the events leading to Alix and Ani’s Chapter 11 filing, essentially the confluence of operational issues pre-COVID and then the COVID pandemic.

The Trabucco Declaration  provides: “Alex and Ani has recently suffered from adverse macro-trends driving customers away from brick-and-mortar retail, like many other retailers. Moreover, Alex and Ani’s explosive growth in the early 2010s resulted in certain operational challenges as the Company’s existing infrastructure struggled to keep up with demand for its products, and significant turnover in management disrupted key business relationships.

Despite the Company’s growth between 2010 and 2015, it ran into a series of operational challenges beginning in 2016, including surplus inventory and burdensome long-term leases. The Company also  faced challenges with respect to inventory management, which inhibited its ability to fulfill a large percentage of wholesale orders.  As a result, the Company’s wholesale business declined from 59 percent of total revenue in 2015 to 19 percent of total forecasted revenue for 2021. Additionally, the general shift in consumer preferences away from brick-and-mortar stores led to a decrease in foot traffic and sales in the Company’s stores and at authorized retailers. These operational challenges were compounded by significant overturn in the Company’s executive management team.

In late 2018, the Company, its then-existing lenders, Ms. Rafaelian (the then-majority equity owner), and Lion Capital (the then-minority equity owner) engaged in restructuring negotiations in the face of the default and acceleration of its credit facility and the suspension of access to its revolving credit facility. The lenders, led by then-administrative agent Bank of America, ultimately agreed to waive all outstanding defaults and subordinate a portion of the secured facility to a new $20 million second lien facility provided by Lion Capital and an entity owned by Ms. Rafaelian. In connection with the transactions, which closed in September 2019 (the '2019 Restructuring'), Ms. Rafaelian stepped down as Chief Executive Officer and I was subsequently appointed Chief Restructuring Officer and Interim Chief Executive Officer. Lion Capital became the Company’s majority shareholder.

Shortly after closing the 2019 Restructuring, the COVID-19 pandemic forced the Company to close all of its stores in the spring of 2020, resulting in a massive drop in revenue. The Company took immediate steps in response, including furloughing employees and otherwise minimizing operating expenses. Continued depressed revenues, however, coupled with the Company’s ongoing lease obligations throughout the pandemic, placed significant stress on the Company’s ability to operate and service its debt obligations.

In addition to funded debt obligations, the Company has outstanding unsecured trade debts (e.g., amounts owed to trade vendors, suppliers, landlords) that total approximately $29.1mn as of the Petition Date and other contingent and unliquidated unsecured obligations related to outstanding litigation.

The Trabucco Declaration provides: "The Company defaulted under the First and Third Lien Credit Agreement in July 2020 and again in October 2020 as a result of its failure to comply with certain reporting and operational requirements and financial covenants. While the Company originally secured a waiver of these defaults, this prompted ongoing dialogue between the Company and Bank of America, as then-administrative agent, regarding a more comprehensive restructuring. It became clear as part of these conversations that the First Lien Lenders were not interested in supporting a comprehensive restructuring, and no longer intended to support the Company as a going concern.

In February 2021, Bank of America declared another default and accelerated all obligations under the First and Third Lien Credit Agreement following the Company’s failure to remit certain amounts and comply with certain reporting requirements and financial covenants thereunder. At this time, the First Lien Lenders insisted on a sale of the Company that would allow for repayment of their outstanding debt. In light of this position, Lion Capital—who was interested in supporting the Company through a restructuring—entered into negotiations with the First Lien Lenders to purchase all outstanding debt under the First Lien Credit Facility and the Third Lien Credit Facility.

According to the Debtors: “ALEX AND ANI creates meaningful, eco-conscious jewelry and accessories to positively empower and connect humanity. Carolyn Rafaelian, Founder, CEO, and Chief Creative Officer designs each piece. Carolyn believes that every individual has their own positive energy to share with the world. By incorporating powerful symbolism and personal meaning into each product, ALEX AND ANI provides a wearable and beautiful way for consumers to express their individuality.  The company is passionate about the wellbeing of our planet, our communities, and our individual paths. ALEX AND ANI uses recycled materials with eco-conscious processes. Its CHARITY BY DESIGN division has strengthened non-profit organizations through innovative partnerships and collaborative experiences, resulting in donations of more than $52 million. An Inc. 500 Company, ALEX AND ANI has retail stores as well as retail partners worldwide. ALEX AND ANI products are proudly designed and crafted in America and made with love. The company's World Headquarters is located in the greater Providence, Rhode Island area.

The Trabucco Declaration adds: "Founded in 2004 by Carolyn Rafaelian, Alex and Ani has become a premier jewelry brand, quickly gaining popularity because of the novel and customizable nature of its signature expandable wire bracelet. Alex and Ani has been headquartered in East Greenwich, Rhode Island since 2014. Since opening its first retail store in Newport, Rhode Island in 2009, Alex and Ani has expanded to over 100 retail store locations across the United States, Canada, and Puerto Rico. Alex and Ani also maintains a vibrant and growing e-commerce presence. With a loyal customer base, Alex and Ani operates as a symbol of spiritual wellness and connectivity that seeks to highlight the individuality of each of its customers." 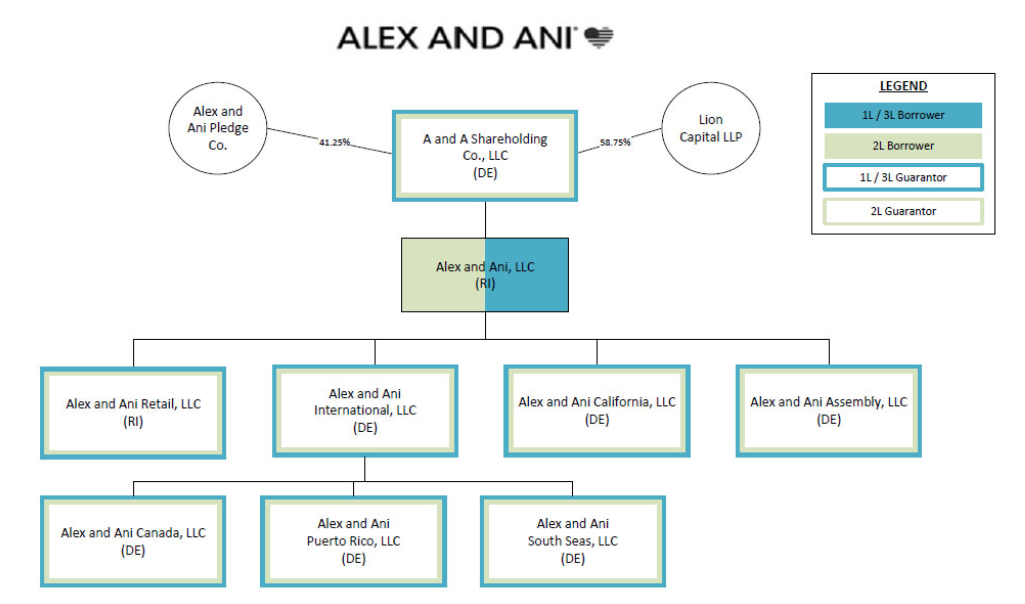