UPDATE: On July 22, 2022, the Court issued an order approving: (i) the adequacy of the Debtor’s Disclosure Statement, (ii) Plan voting and solicitation procedures and (iii) a timetable culminating in a November 2, 2022 Plan confirmation hearing [Docket No. 160].

On July 20, 2022, the Debtor filed a Second Amended Disclosure Statement and a related redline showing changes to the version filed on July 15, 2022 [Docket Nos. 157 and 158 respectively].

The Second Amended Disclosure Statement, includes revised language on releases and new disclosure relating to an adversary proceeding begun by creditor Mr. Carl Weiss (“Weiss”) on July 5th. The Debtor now notes, “Mr. Weiss disagrees with the Debtor’s characterization of the Sponsor’s offer.” Also, “The Debtor disputes the allegations in Weiss’s complaint and, pursuant to the Court’s docket entry, the Debtor believes its answer to the complaint is currently due August 15, 2022. Weiss has stated that he believes the Debtor’s answer is due August 5, 2022.”

Weisss, who owns 50% of the William Vale Hotel (balance held by the Debtor’s sole shareholder, Mr. Yoel Goldman), objects to the inclusion of that Brooklyn hotel in the Debtor’s reorganization which currently envisages a $60.0mn purchase (to be adjusted depending on outcome of the Weiss adversary proceeding) of all of the reorganized Debtor’s equity by Paragraph Partners LLC (the “Sponsor,” formed by Graph Group and Cammerby’s international and which is also an affiliate of Taz Partners).

The Second Amended Disclosure Statement [Docket No. 157], which attached an Investment Agreement states, “Following a robust sales and marketing effort, the Debtor entered into an Investment Agreement, dated March 11, 2022 (as amended on April 21, 2022 and May 27, 2022, and as may be further amended, modified, or supplemented from time to time, and together with all schedules and exhibits thereto, ’Investment Agreement’), with Paragraph Partners LLC (the ‘Sponsor’), among others, to implement a comprehensive restructuring of the Debtor and present a path forward for the Debtor’s successful emergence from chapter 11. The Investment Agreement is the cornerstone of, and is to be implemented pursuant to, the Plan.

The Investment Agreement provides that, in exchange for one hundred percent of the equity of the reorganized Debtor (the ‘Reorganized Debtor’), the Sponsor will contribute $60,000,000 to the Debtor, which is comprised of (a) $40,000,000 in cash and (b) promissory notes in the aggregate amount of $20,000,000. As set forth in further detail in Article IV below, the amount of (i) the promissory notes will increase to $22,000,000 and (ii) the cash contribution may increase by an additional $200,000, if the Sponsor, or an affiliate of the Sponsor, consummates a transaction involving the William Vale hotel.

…only holders of Class 4 Remaining Unsecured Claims are Impaired and entitled to vote on the Plan. Class 4 is comprised of the holders of any Noteholder Claims, Subsidiary Plan Administrator Claims, and Non-Securities Indemnity Claims. The Plan provides for material recoveries to the holders of Allowed Claims in Class 4 (Remaining Unsecured Claims) in the form of Cash, New Notes and any potential recoveries on account of certain Causes of Action that have been preserved for the benefit of holders of Allowed Class 4 Claims. The transactions contemplated under the Investment Agreement will maximize the value of the Debtor’s estate and provide the basis for the expeditious conclusion of the Chapter 11 Case.”

Continuing as to Plan mechanics:

“On the Effective Date, in accordance with the Plan and the Investment Agreement, subject to the satisfaction or waiver of all applicable conditions under the terms thereof, the Sponsor shall: (i) provide the Sponsor Contribution; and (ii) be the sole shareholder of the Reorganized Debtor, and on the Effective Date, shall hold 100% of the NewCo Shares free and clear of all Claims and Liens.

On the Effective Date, in accordance with the Plan and the Investment Agreement, subject to the satisfaction or waiver of all applicable conditions under the terms thereof, the Disbursing Agent (on behalf of the Debtor) shall distribute Pro Rata the Class 4 ED Distribution to (i) the holders of Remaining Unsecured Claims that are Allowed as of the Effective Date, and (ii) the Disbursing Agent, to be held in the Class 4 Disputed Claims Reserve, on behalf of holders of Disputed Remaining Unsecured Claims.

On the Effective Date, in accordance with the Plan and the Investment Agreement, subject to the satisfaction or waiver of all applicable conditions under the terms thereof, a single limited liability company unit representing a non-economic 100% ownership interest in Wind-Down Co shall be issued to the Plan Administrator. The Pro Rata Share of the Class 4 ED Distribution allocated to Disputed Remaining Unsecured Claims shall be held in one or more segregated accounts in the Class 4 Disputed Claims Reserve until such claims are Allowed or Disallowed, at which time the applicable portion of the Class 4 ED Distribution (including any earnings
thereon, net of any allocable costs and expenses of the Class 4 Disputed Claims Reserve) shall be distributed to such holders of newly Allowed Remaining Unsecured Claims or to the holders of Remaining Unsecured Claims that were previously Allowed, as the case may be.

Following the distribution of all amounts from the Class 4 Disputed Claims Reserve, the liquidation of the Excluded Assets (including the completion of the prosecution of any Avoidance Actions and other Causes of Action held by Wind-Down Co), and the distribution of the proceeds therefrom and any remaining Wind Down Cash Funding in accordance with the Plan (including the payment of all costs and expenses and other liabilities of Wind-Down Co), Wind-Down Co shall be dissolved and the single unit shall be deemed cancelled and of no further force and effect. The Plan Administrator shall have no right to any distribution of property or value.”

The following is an unchanged summary of classes, claims, voting rights and expected recoveries (defined terms are as defined in the Plan and/or Disclosure Statement):

The Disclosure Statement [Docket No. 157] attached the following exhibits:

In a declaration in support of the Chapter 11 filing (the “Ravid Declaration”), Assaf Ravid, the Debtor's chief executive officer and chief restructuring officer, detailed the events leading to All Year’s Chapter 11 filing. The Ravid Declaration provides: “[T]he ongoing COVID-19 pandemic severely impacted the Parent Debtor because it derives its revenues primarily from residential rental income streams. As a result, the Parent Debtor began struggling to service its debt, which necessitated discussions with third parties regarding a path forward to prevent any additional leakage of value.

Nevertheless, the Parent Debtor is faced with potential litigation in multiple jurisdictions in light of its insolvency and defaulted Bonds. The commencement of cross-border litigation subject to differing legal regimes would undermine the Parent Debtor’s ability to effectuate a holistic, value-maximizing restructuring transaction in an orderly manner. On December 13, 2021, the Parent Debtor became aware of a $37 million judgment entered against it in New York State Supreme Court on December 9, 2021, resulting from outstanding confessions of judgment that the Sole Shareholder unilaterally entered into on behalf of the Parent Debtor without consultation of the Board. The existence of this judgment poses a threat that the judgment creditor may attempt to attach a lien on the Company’s assets, including its cash, thereby divesting the Company of its ability to continue its ongoing operations and to support the operations of the PropCos.

The expiration of these voting rights would deprive the Bondholders and other parties in interest of their ability to continue their discussions and finalize an exit transaction for the Parent Debtor. To preserve the integrity of its restructuring process, the Parent Debtor was forced to commence this Chapter 11 Case to safeguard its assets for the benefit of its creditors and other parties in interest.

As set forth above, the Parent Debtor is not seeking any first day relief. The Parent Debtor is focused on continuing its discussions with its Bondholders and promptly presenting to the Court a restructuring solution that maximizes value for its creditors and estate.”

According to the Debtor: “All Year Holdings Limited primarily operates residential real estate properties in Brooklyn, New York. It is involved in the acquisition, construction, improvement, development, rental and management of residential apartments. 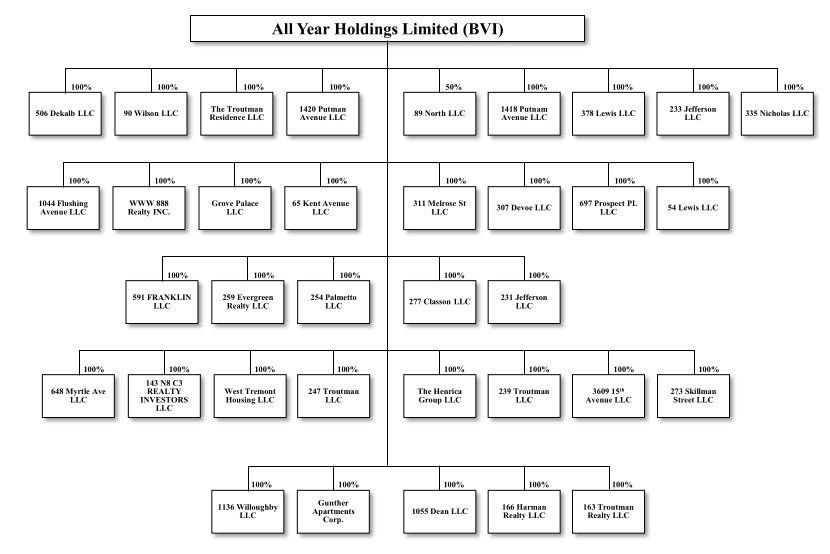 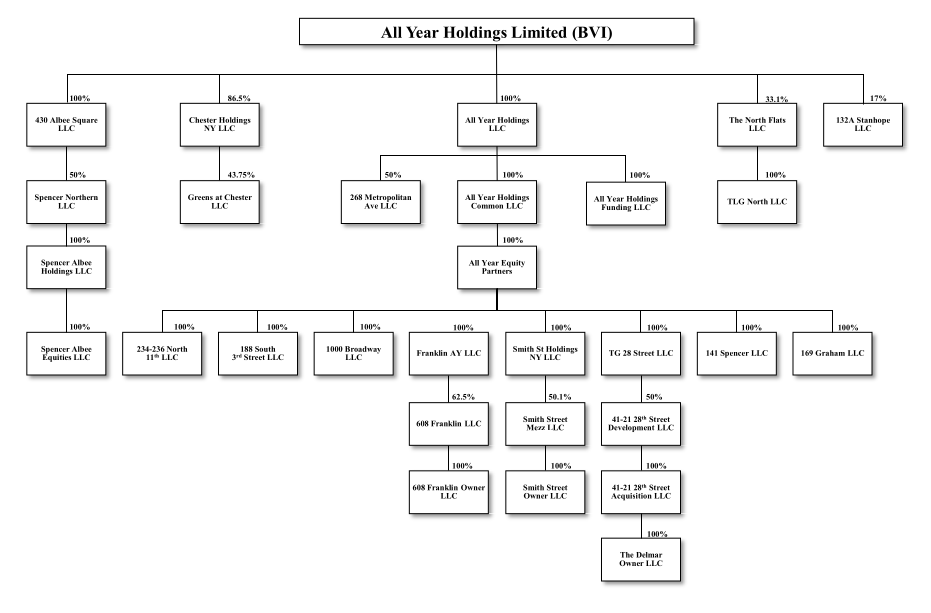