December 11, 2020 – The Court hearing the Alpha Entertainment case confirmed the Debtor’s Second Amended Chapter 11 Plan [Docket No. 592], clearing the way for the Debtors to emerge under new owners Alpha Opco (see details below).

On December 10th, the Debtors had filed their Second Amended Chapter 11 Plan and a related blackline showing immaterial changes to the version filed on November 4, 2020 [Docket Nos. 583 and 584, respectively].

On April 13, 2020, Alpha Entertainment LLC (XFL) and one affiliated Debtor (“XFL” or "the Debtors") filed for Chapter 11 protection with the U.S. Bankruptcy Court in the District of Delaware, lead case number 20-10940. At filing, the Debtors, owners of a start-up professional football league, noted estimated assets between $10.0mn and $50.0mn; and estimated liabilities between $10.0mn and $50.0mn. In a subsequently filed Schedule A/B, the lead Debtors noted $28.8mn of assets and $31.4mn of liabilities [Docket No. 194].

The Disclosure Statement [Docket No. 435] notes, “The following is an overview of certain material terms of the Plan:

In addition, the Plan cancels all Interests in the Debtor, and provides for the dissolution and wind-up of the affairs of the Debtor."

The following is an updated summary of classes, claims, voting rights and expected recoveries (defined terms are as defined in the Plan and/or Disclosure Statement, see also the Liquidation Analysis below):

On December 8, 2020, the claims agent notified the Court of the Plan voting result [Docket No. 562], which was as follows:

According to documents filed by the Debtors, acquisition vehicle (and sole qualified bidder) Alpha Opco is a joint venture between “The Garcia Companies” and “Redbird Capital Partners Management LLC.”

The Garcia Companies and Redbird Capital Partners Management LLC. An unexecuted version of the APA governing the terms of the sale is attached to the order as Exhibit 1. That APA refers to the Buyer as Alpha Acquico, LLC

The exact ownership of Alpha Opco (aka Alpha Acquico) is uncertain, but in addition to the parties named above also clearly includes entrepreneur Dwayne "The Rock" Johnson who "continues to grow his groundbreaking success while managing his ever-expanding and diverse entertainment portfolio."

In a press release announcing their successful bid, Alpha Opco stated: "Dany Garcia, Dwayne Johnson and RedBird Capital Partners have been selected as the winning bidder for substantially all of the assets of Alpha Entertainment LLC, the parent company of the XFL. The XFL assets will be sold to Garcia, Johnson and RedBird for approximately $15 million, in accordance with the terms and conditions of the asset purchase agreement. The transaction is subject to bankruptcy court approval at a hearing this Friday, August 7 and, assuming that closing conditions are satisfied, is expected to close on or shortly after August 21."

In a declaration in support of the Chapter 11 filing (the “Pollack Declaration”), Jeffrey N. Pollack, the Debtor’s President and Chief Operating Officer, detailed the events leading to XFL’s Chapter 11 filing. The Pollack Declaration states: “Unfortunately, the Debtor was not immune from the disruption of the global COVID-19 pandemic that has shuttered much of the United States and forced every major American sports league to suspend, if not cancel, their seasons. On March 12, 2020, the Debtor canceled the remainder of its regular season, and on March 20, 2020, the Debtor made the difficult, but necessary, decision to cancel the remainder of the XFL’s inaugural season after just five weeks.

It is estimated that cancellation of the final five weeks of league’s regular season “negated approximately $27 million in fan spending on gameday-related items” such as ticket sales and food, beverage, and merchandise purchases, to say nothing of the revenue from playoff games or the lost opportunities for sponsorship revenue and brand development.6  With the league shuttered and no games being played (or revenue being generated), the COVID-19 pandemic left the Debtor facing near-term liquidity issues.  With the duration of the pandemic uncertain and the Debtor’s operating expenses continuing unabated, the Debtor was left with few viable alternatives outside of chapter 11.”

Exhibits attached to the Disclosure Statement [Docket No. 497]:

The following documents were attached to the Plan supplements, as amended [Docket No. 585]:

Liquidation Analysis (see Exhibit B of Disclosure Statement [Docket No. 497] for notes) 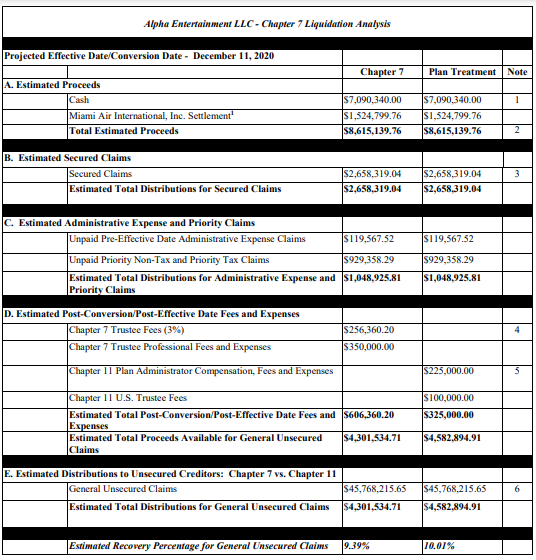 K.G. LM, LLC – Files for Chapter 11 Protection in Respect of Seven “Il Mulino” Restaurants; Accuses Lender of Using COVID-19 “To Wipe Out All Stakeholders” in “Debt to Equity Conversion Play”

Seadrill Limited – Global Offshore Drilling Contractor Slides Back Into Chapter 11 with $7.2bn of Debt After Talks With Senior Lenders Break Down; Debtors Expect “Significant Equitization” of Debt and No Recovery for Shareholders 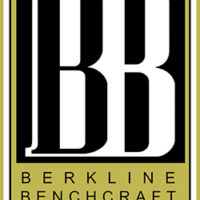