November 16, 2021 – Further to a September 15th bidding procedures order [Docket No. 198] and an auction conducted on November 4th, the Court hearing the Alpha Latam Management cases issued an order approving the sale of substantially all of the loan portfolio of Alpha Capital S.A.S. and Vive Créditos Kusida S.A.S. and certain related operational  assets (the “Purchased Assets”) to CFG Partners Colombia SAS (“CFG Colombia,” with cash consideration the Debtors estimate at $149.0mn) [Docket No. 365]. CFG Colombia is an affiliate of Puerto Rico headquartered CFG Partners L.P. which, since its November 2018 acquisition from Irving Place Capital, is 100% owned by an investor group led by BayBoston Managers.

In a November 5th notice [Docket No. 341] announcing its selection of CFG Colombia as the successful bidder, the Debtors also named affiliates of CarVal Investors as the back-up bidder ($148.1mn bid). The successful bidder and back-up bidder APAs are attached to the notice as Exhibit A (p. 6) and Exhibit B (p.134), respectively, as is a redline comparing the CFG Colombia APA against that of stalking horse Cerberus South American Investments, LLC ("Cerberus") which had opened the auction process with a bid that the Debtors valued at $137.2mn. Cerberus will now be in line for a $3.0mn break-up fee and an up to $1.0mn expense reimbursement.

The Debtors are obligated to repay amounts outstanding under their $45.0mn debtor-in-possession ("DIP") facility with the proceeds.

Alpha Latam announced the sale in a press release, stating, "The proposed sale, which was presented to the Bankruptcy Court on Tuesday, is estimated to produce a gross value of approximately $149.5 million. CFG Partner's successful bid is the result of six rounds of competitive bidding during the auction and is higher than the purchase price reflected in the Stalking Horse APA approved by the Bankruptcy Court in early October of $134.9 million.

The CFG Partners bid ultimately was deemed the highest and best bid because in addition to the purchase of the assets of the loan portfolio, it included the assumption of the Colombian Sellers' Bogota headquarters lease, the purchase of related HQ facility assets and equipment, and the potential hiring of certain of the Debtors' employees.

The closing of the sale is conditioned upon regulatory approval by the Colombian Superintendence of Corporations, and other customary closing conditions."

Oriol Segarra, President and CEO of CFG commented, "We are pleased to announce the acquisition of Alpha's Colombian Loan Portfolio, which will accelerate the strategic geographic expansion of our operations into Colombia which will now become an important growth driver for CFG."

CFG Senior Vice President of Strategy and Corporate Development Eduardo Arguello further commented, "The 'libranza' or payroll deduction loan origination business model in Colombia is similar to that of our existing operations in other geographies where CFG has maintained a leading franchise for decades. We have already assembled a local management team with experience in this market that will manage the Alpha acquisition and lead the launch of our payroll loan deduction product via digital channels in the upcoming months."

An estimation of the Purchase Price based on accounting loan balances as of June 30, 2021 (as per the updated data tape provided in the data room on October 29, 2021) is included below for illustration purposes: 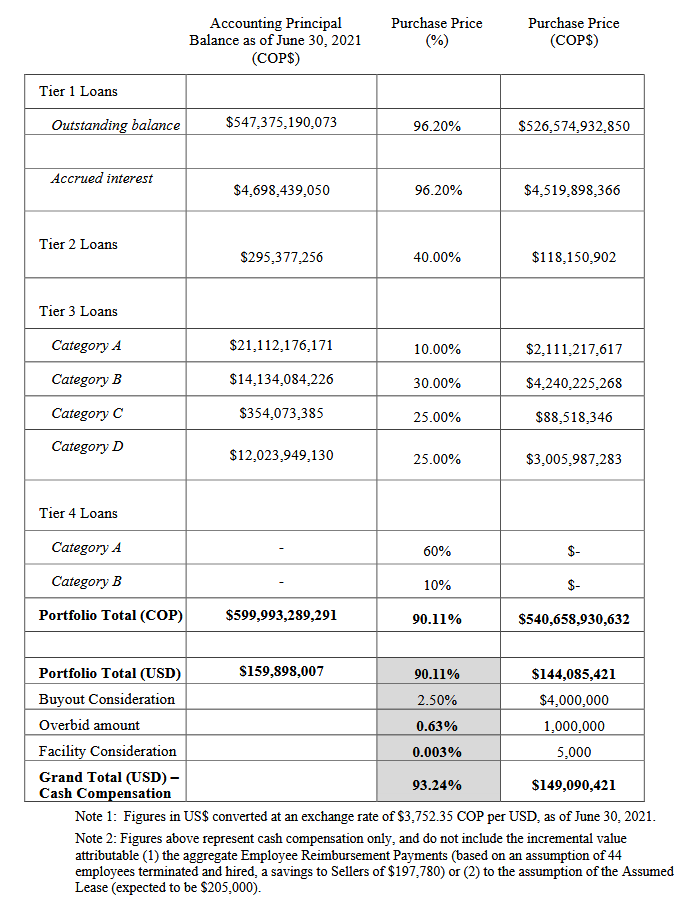 Even though the roots of the company date back 40 years, CFG was established in December 2006 as a result of the sale of Wells Fargo Financial’s Latin American Consumer operations to Irving Place Capital, a private equity firm based in New York City.

CFG Partners currently operates more than 60 locations throughout Panama and the Caribbean.

On October 1, 2021, the Court hearing the Alpha Latam Management cases issued an order authorizing the Debtors to enter into a stalking horse arrangements with Cerberus South American Investments, LLC ("Cerberus") in respect of the sale of "certain loans in the Sellers’ loan portfolio and certain contracts related to the operation of such portfolio (the 'Stalking Horse Package')" [Docket No. 255, with the Cerberus APA and a related blackline filed at Docket No. 253]. The Debtors valued the Cerberus bid at $137.2mn which came with a $3.0mn break-up fee and a $1.0mn expense reimbursement as bidder protections.

As described further below, the Debtors, payday lenders with operations in Colombia and Mexico, filed for bankruptcy on August 1st after significant financial irregularities were uncovered in respect of their Mexican operations. From the outset, the Debtors (with $768.4mn of issued and/or guaranteed funded debt) have been focused on an in-Court sale of their apparently healthy Colombian operations.

The Debtors' stalking horse motion [Docket No. 209] notes, “After identifying that a sale was the best path for maximizing the value of the Assets, the Debtors, through Rothschild & Co US Inc. and its affiliates, including Rothschild & Co Mexico S.A. de C.V., (‘Rothschild & Co’) as their investment banker, began a sale and marketing process over four months ago. Indeed, these Chapter 11 Cases (as defined below) were commenced to effectuate a sale of the Assets via section 363 of the Bankruptcy Code (the ‘Sale’). To that end, shortly after commencing these Chapter 11 Cases, the Debtors filed the Bid Procedures Motion (as defined below) and the Court hereafter entered the Bid Procedures Order. The Bid Procedures Order set key dates for the Debtors to obtain Bids on the Assets, conduct an Auction, and obtain this Court’s approval of a Sale Transaction. In tandem, the Debtors continued to conduct a competitive stalking horse bidding process and, as outlined in the Leclercq Declaration, received several stalking horse bids and continued to negotiate in good faith with such bidders. Ultimately, the Debtors were able to secure the Stalking Horse Bid (as defined below) on the material terms set forth herein. This Motion, therefore, represents the culmination of that process and the next significant milestone in the Sale process.

The Debtors' bidding procedures and sale motion [Docket No. 113] reads: “The proposed Bidding Procedures allow the Debtors to continue and conclude the marketing process they began approximately three months ago in an appropriate timeframe through a competitive auction process. Even before the commencement of these Chapter 11 Cases, the proposed sale of the Assets was identified as the best path for maximizing the value of the Debtors’ estates. To test this thesis, the Debtors initiated a thoughtful process in May to solicit indications of interest for the Assets. During their prepetition negotiations and restructuring analysis, it became evident that the best way to maximize value for the Assets was to pursue an in-court sale via section 363 of the Bankruptcy Code, which was one of the reasons the Debtors commenced these Chapter 11 Cases.

Since commencing the marketing process, the Debtors have received robust engagement, with several credible parties submitting indications of interest and progressing towards the submission of binding bids. The Debtors have been actively negotiating with various potential bidders and may be in a position to enter into a binding stalking horse agreement in short order. While the Debtors do not seek authority pursuant to this Motion to enter into one or more stalking horse agreements, they may do so on an expedited basis pursuant to a separate motion and order (including any bid protections that may be provided therein). Upon conclusion of the Auction and selection of the highest or otherwise best bid(s), the Debtors request that the Court hold the Sale Hearing and enter the Sale Order authorizing and approving the Sale free and clear of Interests (subject to the Successful APA).

As this Court is aware, on August 3, 2021, the Court authorized the Debtors to enter into a $45 million senior secured superpriority new money debtor-in-possession financing facility, of which $17.5 million was available upon interim approval (the ‘DIP Facility’). Order (I) Authorizing the Debtors to Obtain Debtor-In-Possession Financing and Granting Liens and Superpriority Administrative Claims and (II) Granting Related Relief [Dkt. No. 81] (the ‘Interim DIP Order’). The DIP Facility is secured by liens on and security interests in substantially all assets and property of the Debtors. The Debtors are expected to repay the DIP Facility with proceeds of a sale of substantially all of the Assets.”