The Castellano Declaration (defined below) provides: "The success of  these Chapter 11 Cases depends upon the Debtors’ ability to preserve their operations while they conduct the sale process for the Colombian Assets….The Debtors continue to engage in due diligence and negotiate with potential buyers, and are optimistic they will be in a position to select a stalking horse bid and file a motion seeking approval of bidding procedures (including entry into a potential stalking horse agreement) within the first few days of these Chapter 11 Cases."

In a declaration in support of the Chapter 11 filing (the “Castellano Declaration”), John Castellano, a Managing Director with the Debtors' financial advisors AlixPartners, detailed the events leading to Alpha Latam’s Chapter 11 filing. The Castellano Declaration provides: “In connection with an internal accounting review, the Company identified certain accounting errors with respect to the Mexican segment of its business, and on March 13, 2021, formally presented a preliminary report of such accounting errors to the board of managers of ALM (the 'ALM Board'). As a result, a special committee, comprised of non-management members of the ALM Board (the 'Special Committee'), was formed and hired independent counsel to provide advice in connection with the investigation of the accounting errors. The Special Committee’s legal counsel retained a forensic accounting firm to assist legal counsel in providing advice to the Special Committee. The Special Committee is chaired by the Board’s independent manager.

On April 20, 2021, the Company publicly announced errors in the Company's accounting for its derivative positions and the need to restate its financial statements for the years ending 2018 and 2019. The Company also disclosed additional accounting errors relating to the Company’s: (i) allowance for loan losses; (ii) reserves for certain accounts receivables; and (iii) amortization of certain capitalized expenses. Shortly after the Company’s announcement, certain creditors sent notices of default to the Company for, among other things, failure to accurately report financial statements. Though the Company and its advisors tried to negotiate forbearance and waivers with these creditors, these efforts proved unsuccessful. As a result, the Company was unable to continue raising capital to continue to originate new Alpha Loans ["In Colombia, the Debtors have historically focused on providing PDLs to current and former governmental, union, and private sector employees, pensioners, and retirees (the 'Alpha Loans' and the borrowers thereunder, the 'Alpha Borrowers') using the Vive brand'.]"

The Company’s advisors also began analyzing the Company’s liquidity position. As part of that process, the Company determined that due to several factors, including the variability in loan collections, it needed to preserve cash. As a consequence, the Company, based on advice from its advisors and with a view toward maximizing value in the best interests of the Company and all relevant stakeholders, determined that the Company would cease making any new loan originations and would elect to exercise the grace period under the Senior Notes…by not making the June 19, 2021 interest payment.

Starting in May 2021, with Rothschild’s assistance, the Company began to market the Company’s unencumbered Colombian loan portfolio (the “Colombian Assets”) in an effort to bolster its cash position. As the Company’s liquidity position tightened, and negotiations with key stakeholders progressed, it became evident that the best path for a restructuring of the Company was a sale of substantially all of the Debtors’ Colombian Assets pursuant to section 363 of title 11 of the United States Code (the “Bankruptcy Code”). To that end, the Company began preparing for the commencement of these Chapter 11 Cases in parallel with negotiating a stalking horse bid and soliciting a $45 million debtor-in-possession financing (“DIP Financing”) to provide the bridge necessary for the Debtors to effectuate a sale of the Colombian Assets.”

The Debtors have obtained debtor-in-possession ("DIP") financing commitments for a senior secured superpriority facility of $45.0mn to be provided by holders of its Senior Notes pursuant to a Secured Super-priority Debtor-in-Possession Note Purchase Agreement (the “DIP Note Purchase Agreement”). Under the DIP Note Purchase Agreement, the DIP Financing will be secured by first priority senior liens on substantially all of the Debtors’ unencumbered assets (including the Debtors’ rights under the Intercompany Facility) and junior liens on assets subject to prior liens. The Debtors will use a portion of the proceeds of the DIP Financing to fund their Mexican Affiliates pursuant to the Intercompany Facility, which Intercompany Facility is secured by first liens on the Mexican Affiliates’ unencumbered loan portfolios, government receivables, and other assets.

As at filing, the Debtors were either borrowers/issuers or guarantors of approximately $768.4mn in third-party financial debt obligations as summarized below: 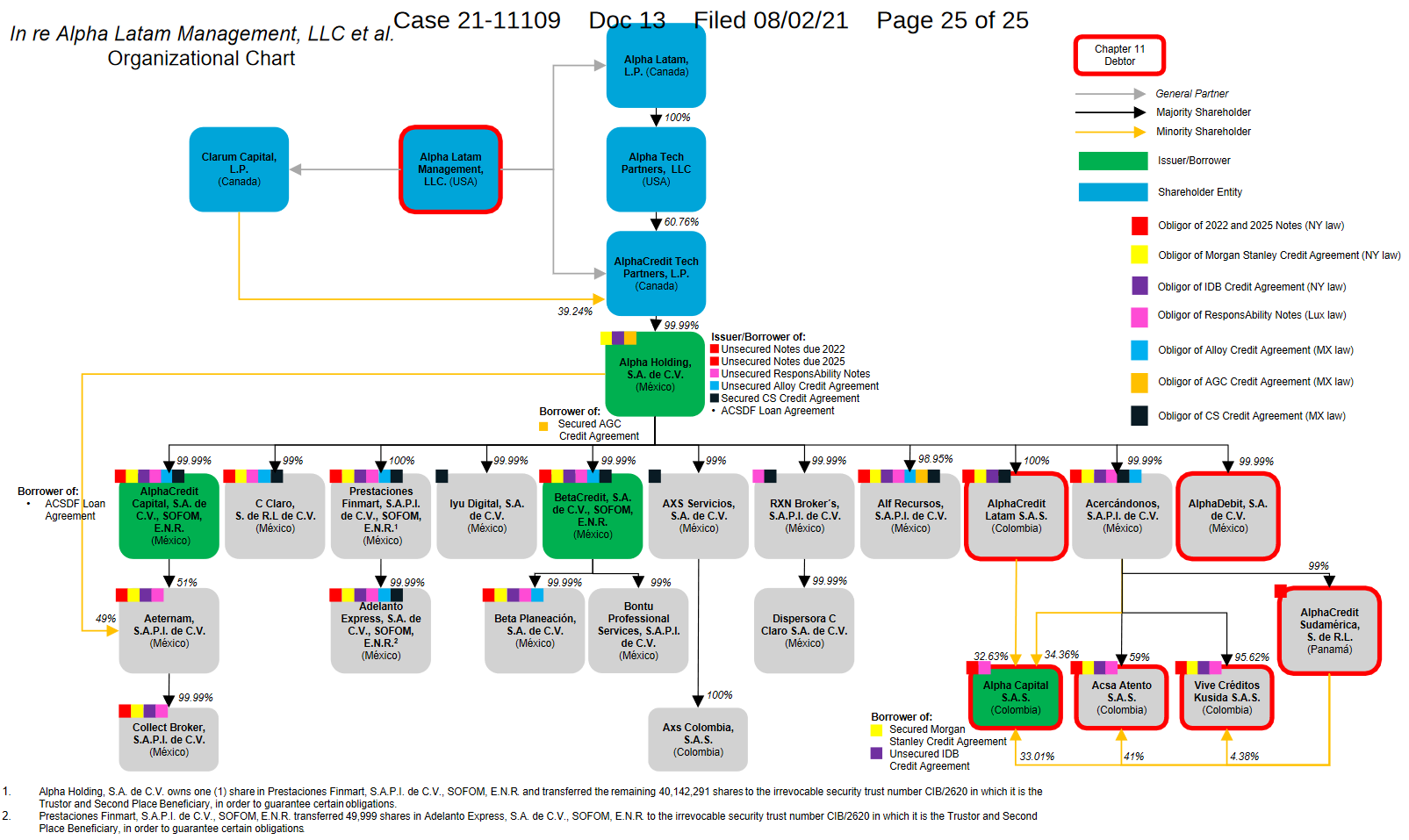