February 4, 2021 – The Debtors filed a motion requesting Court approval of (i) the adequacy of their Disclosure Statement, (ii) proposed Plan solicitation and voting procedures and (iii) a proposed timetable culminating in an April 15, 2021 Plan confirmation hearing [Docket No. 94].

On January 25th, the Debtors filed a Plan of Reorganization and a related Disclosure Statement (at Docket Nos. 25 and 26, respectively), with those documents reflecting a certain degree of turmoil as to what had been only days earlier a prepackaged Plan. The Debtors were actually on their last day of voting (January 15, 2021) in respect of a prepackaged Plan when the wheels came off of that aspiration; their prepetition first lien lenders (led by Antares Capital LLC or “Antares” ) informing the Debtors that they had sold that debt to an affiliate of Fortress Investment Group LLC (“Fortress”). As the Disclosure Statement notes: "Fortress soon made it clear to the Debtors’ advisors and advisors to ICG that it was not willing to immediately agree to support the prepackaged chapter 11 plan or provide a postpetition financing facility like the Consensual Junior ICG DIP Proposal."

The result is that the proposed Plan and the Disclosure Statement in respect of which the Debtors are now seeking approval will be going out to many stakeholders for a second time, with this version of the Disclosure Statement no longer attaching exhibits (eg financial projections and liquidation analysis) that in the early confusion were filed with the Court (including with references to a prepackaged Plan) on the Petition date.

Following the change of Plan, the Debtors have negotiated a second restructuring support agreement (the "RSA," draft attached to the lead petition at Exhibit D) with (i) certain holders of their second lien notes (issued 2016, with ICG Debt Administration LLC as agent) and (ii) ICG North America Holdings Ltd. (“ICG North America”) and Intermediate Capital Group plc (“ICG PLC”), the noteholders in respect of the Debtors' 2016 "Prepetition Holdco Note Purchase Agreement." The RSA is supported at levels in excess of that necessary for Plan confirmation (ie 66.7% in amount and more than half in number). The RSA also commits the Debtors to emerge from bankruptcy in under three months (80 calendar days from filing for Plan confirmation and a further three business days to go effective).

The Debtors' declaration in support of first day filings sums up: "Under the terms of the proposed restructuring, which is memorialized in the Restructuring Support Agreement and the Plan, ICG has agreed to provide $37.5 million of new money in the form of a second lien secured note purchase facility, $20 million of which represents the conversion, upon the Debtors’ emergence from bankruptcy, of the senior priming postpetition debtor-in-possession financing that ICG has agreed to provide. Pursuant to the Plan, the holders of claims related to the Debtors’ obligations under the Second Lien Notes Agreement will be converted to equity in the reorganized company. In addition, all general unsecured claims are riding through the bankruptcy unimpaired and will be paid in the ordinary course of business, and the Debtors’ obligations to their employees, customers, and trade vendors will be largely unaffected by these chapter 11 cases."

The Disclosure Statement provides the following on the events leading to the Debtors’ Chapter 11 filing: “The radio broadcasting industry has been severely affected by the coronavirus pandemic. Like its competitors, Alpha Media has seen its revenues fall as its customers—the majority of whom are small to mid-size business that have been severely and adversely affected by COVID-19—have reduced their advertising budgets to weather the economic downturn. Indeed, Alpha Media has experienced a precipitous decline in year over year revenue since March 2020 as set forth below.

The Debtors have lined up commitments for $20.0mn of debtor-in-possesion ("DIP") financing to be provided by prepetition lenders and with ICG Debt Administration LLC as agent. The proposed "Senior Secured Priming Superpriority Debtor-In-Possession Note Purchase Agreement" is attached to the lead petition at Exhibit A.

The Debtors have also secured an agreement in principle for $37.5mn of exit financing from the RSA parties.

Lead Debtor Alpha Holdings is the direct or indirect parent of each of the other Debtors, all of which are entities organized under the laws of the State of Delaware. As of the Petition Date and as summarized in the table below, the Debtors’ capital structure consists of outstanding funded-debt obligations in the aggregate principal and interest amount of approximately $267.0mn.

According to the Debtors: “Alpha Media is a diverse, multimedia company sharing your favorite music, sports and news across a variety of platforms. Whether it’s on your phone, desktop, tablet, smart speaker or in your car, our stations and websites will enhance your journey.

Alpha owns or operates 207 radio stations and 200+ websites serving 44 markets across the United States. In addition to the stations and websites, Alpha Media owns the intimate performance venues, Bloodworks Live Studio in Portland, OR; Alamo Lounge in San Antonio, TX; and StudioEast in Kenosha, WI. Strong relationships with clients and community members keep Alpha true to its Live and Local philosophy." 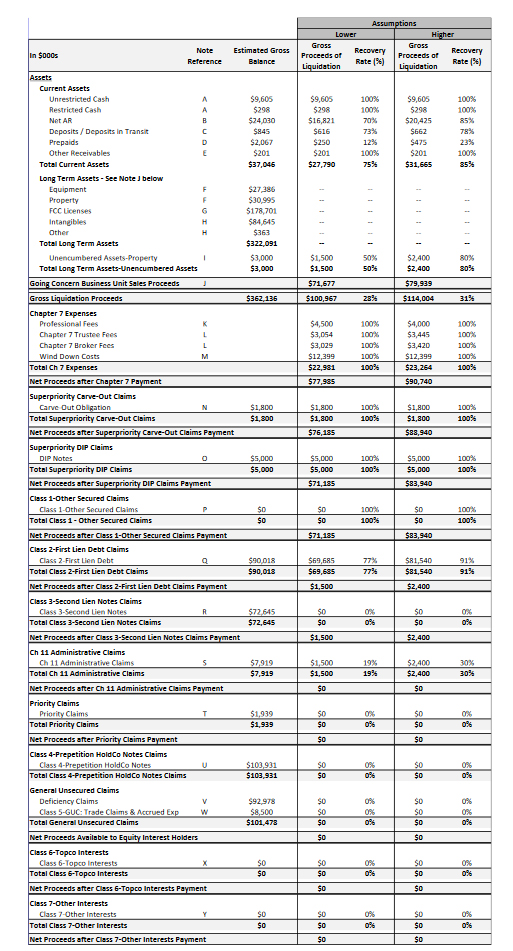 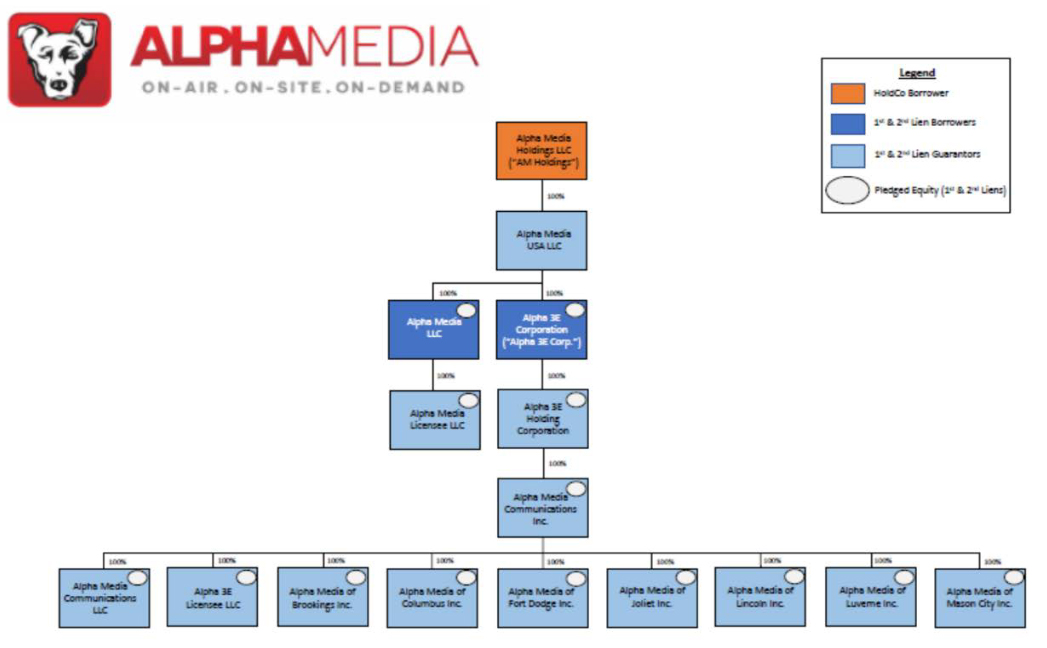