April 27, 2020 – The Court hearing the Alta Mesa Resources cases issued an order conditionally approving (i) the KFM Debtors' Disclosure Statement, (ii) proposed Plan solicitation and voting procedures and (iii) a proposed timetable which culminates in a May 27th combined hearing [Docket No. 1623].

On April 22nd, the Court issued a substantially identical order in respect of the AMR/AMH Debtors’ Disclosure Statement, etc [Docket No. 1593].  As those following these painful cases know all too well; notwithstanding that the Debtors' assets are being sold collectively, the Debtors' cases remain separated into two clusters of Debtors, comprised of (i) Alta Mesa Resources, Inc. and its subsidiary Debtors (“AMR” or the “Initial Debtors”) and (i) Kingfisher Midstream, LLC  and its subsidiary Debtors (the "KFM Debtors"). As we have summed up several times previously in respect of these idiosyncratic cases: "In sum, one company that filed bankruptcy in two groups four months apart (AMR filing in September 2019 and KFM the following January) that are having their cases jointly administered to distribute assets sold to the same purchaser through two separate asset purchase agreements, albeit under separate Plans and Disclosure Statements."

Please see below for more on the Debtors'  tortuous path to a global settlement, notably including the agreement of modified asset purchase agreements which will see the purchase price paid by BCE-MACH III LLC for the Debtors' AMR and KFM assets reduced from $320.0mn to $220.0mn (with an adjustment, resulting in a range of $200.0m to $240.0mn, based on crude oil priced in May 2020).

The Disclosure Statement [Docket No. 1595] provides: “The KFM Assets were substantially liquidated pursuant to the Sale Transaction. Additionally, as discussed in more detail below, a portion of the proceeds were distributed to the Lenders (as defined below) pursuant to the terms of the Lenders’ Adequate Protection Order. Accordingly, the purpose of the Plan is to effectuate the distribution of the remaining cash proceeds (the “Sale Proceeds”) and other consideration (including the KFM ORRI) following the closing of the Sale Transaction and the liquidation of any remaining KFM Assets and the orderly wind down of the KFM Debtors’ estates. The Plan constitutes a joint chapter 11 plan for all of the KFM Debtors, and the classifications and treatment of Claims and Interests in the Plan apply to all of the KFM Debtors (but not any of the other Debtors).

A portion of the Sale Proceeds will be used to fund the costs of completing the chapter 11 cases (including satisfying Allowed Administrative Expense Claims and Fee Claims) and winding down the KFM Debtors’ estates. The remaining Sale Proceeds and other available Cash and non-Cash consideration in the KFM Debtors’ estates are expected to be used exclusively to pay Credit Agreement Claims. The KFM Debtors do not expect there to be any value from encumbered assets in excess of the Credit Agreement Claims and Adequate Protection Claims or unencumbered assets available to pay General Unsecured Claims.

Under the Plan, the KFM Debtors will appoint a Plan Administrator who will, among other things, steer the KFM Debtors toward a quick and efficient final resolution. The Plan Administrator will have the authority, on behalf the KFM Debtors, to implement all provisions of the Plan, including controlling and effectuating the Claims reconciliation process (if necessary); making distributions in accordance with the Plan; preparing, filing, and prosecuting any necessary filings; and prosecuting, settling, or otherwise resolving all preserved Causes of Action.”

The following is a summary of classes, claims, voting rights, and expected recoveries (defined terms are as defined in the Plan and/or Disclosure Statement, changes in Bold):

[As previously reported] April 2, 2020 – Alta Mesa Resources, Inc. and its subsidiary Debtors (“AMR” or the “Initial Debtors,” and together with Kingfisher Midstream, LLC  and its subsidiary Debtors, or "the KFM Debtors, the “Debtors”) filed an emergency motion requesting authorization to enter into and perform under a pair of modified asset purchase agreements with the purchaser of both of the AMR and KFM assets, BCE-MACH III LLC ("BCE-Mach" or the “Purchaser”) [Docket No. 1478]. Executed versions of the revised asset purchase agreements are attached in this motion.

The modified APAs reduce the purchase price to be paid by BCE-Mach from $320.0mn to $220.0mn with an adjustment (resulting in a range of $200.0m to $240.0mn) based on crude oil priced in May 2020. The motion cites the "grim realities of the current economic environment and conditions in the oil and gas industry," as precipitating the change, but many watchers will cite the "grim realities" of a messy sales process and a questionable purchaser who after several delays of its own making left the Debtors' sales efforts exposed to the coronavirus. As a result of those delays, the Debtors were given Court approval (the same Court that issued sales orders in respect of what was loudly criticized as a hasty and bid-chilling sales process to an alleged "insider" in January) to restart their marketing process; except that the "grim reality" was that in the current economic environment the value of the Debtors' assets had dropped precipitously, leaving BCE-Mach again the Debtors' choice…albeit at a considerably reduced price. It will be interesting to see in coming days whether the coronavirus has dampened the will of what have been many objecting voices throughout the Debtors' Chapter 11 cases and sales process.

Who said things couldn't get worse? Even before COVID-19 this was a truly messy and acrimonious transaction. As we summed up previously: "In sum, one company that filed bankruptcy in two groups four months apart (the Initial Debtors filing in September 2019) that are having their cases jointly administered to distribute assets sold to the same purchaser through two separate asset purchase agreements, albeit under separate Plans and Disclosure Statements. Fair to say, this has left a trail of angry stakeholders."  And those were the good old days.

By way of more-detailed reminder, the KFM Debtors filed for bankruptcy on January 12, 2020 and their cases are now being jointly administered with the chapter 11 cases of the Initial Debtors who filed for Chapter 11 on [what else] September 11, 2019. Shortly (in the view of many objecting parties, way too shortly) after the KFM Debtors filed for bankruptcy, the Debtors held a joint auction of their respective assets (ie the AMR assets and the KFM assets) on January 15, 2020.

Further to that auction, BCE-Mach was designated as the successful bidder in respect of substantially all of the Debtors' assets and holders of the Debtors' 7.875% senior notes due 2021 (the "Ad Hoc Group") were named as the back-up bidder [Docket No. 888]. Notwithstanding that the Debtors' AMH Assets and KFM Assets were covered by separate asset purchase agreements (with that construct continuing with the revised agreements), the auction was conducted as if the assets were "one package;" the transcript noting: "The Debtors' assets that are to be auctioned off today will be considered as one package for all of the assets. There will be no need for any bidder to allocate the value of their bids."

Interestingly, the Debtors' April 2nd emergency motion does not mention renewed interest from the credit-bidding Ad Hoc Group who were left fuming at the section 363 altar when their bid, which they and others had argued was more certain than that of alleged "insider" BCE-Mach, was rejected by the Debtors. Ironically, the shambolic and oft-delayed sale to BCE-Mach may have kept those spurned senior creditors from being hit by the COVID-19 bus.

On January 24, 2020, the Bankruptcy Court entered orders approving the “joint” sales to BCE-Mach. At the time, the Debtors stated that they expected the sales to close on or around February 12, 2020. Shortly before that date, however, BCE-Mach asked that the closing be delayed until February 28, 2020, citing "the administrative convenience of an end-of-month closing versus a mid-month closing and concerns about the parties’ preparedness to close by the target date." Then, as the end of February approached, BCE-Mach notified the Debtors that "due to late-breaking issues between the Buyer and certain potential alternative financing providers," there would have to be another delay, this time until March 9, 2020. The rest is coronavirus history.

Please see our other extensive coverage on why, inter alia, (i) the Debtor’s Official Committee of Unsecured Creditors (the “Committee”) filed a motion to convert the Debtors’ Chapter 11 cases to cases under Chapter 7 [Docket Nos. 1315]  arguing that prepetition lender Wells Fargo was exerting "dictatorial control" and that “the AMH Debtors’ Chapter 11 cases have never followed traditional, normative patterns. The process has been chaotic, and the lack of direction and purpose has come at an enormous administrative expense…" and (ii) the Committee urged the Debtors to reject the BCE-Mach bid as "from an insider, board member, and substantial indirect equity owner of the Debtors," in favor of that of the Ad Hoc Group [Docket No. 761]and (iii) Bank of Texas, a lender to both the AMH Debtors and KFM Debtors, objected to a rushed sale process as a "confusing, disjointed process with the overhanging uncertainty caused by the litigation between Debtors and KFM and related entities…[yes the Debtors were suing each others, and] a rush to the end that can only benefit the stalking horse, and is at the expense of creditors. [Docket No. 846] 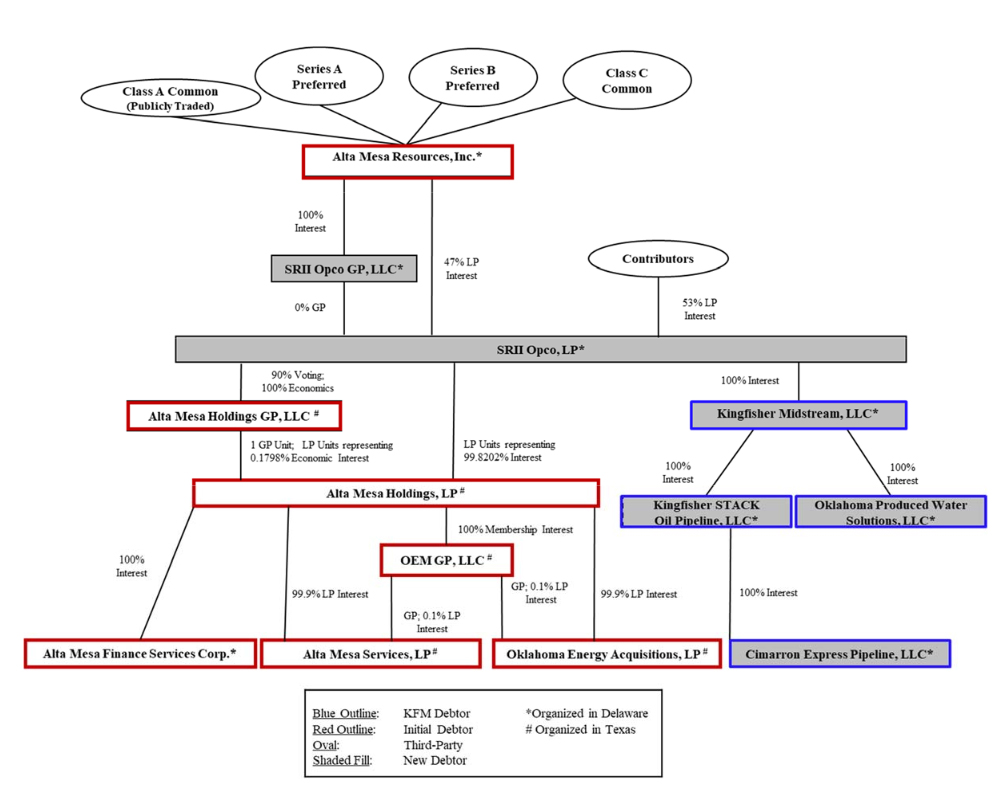