August 13, 2022 – The Debtors requested Court authority to: (i) obtain debtor-in-possession (“DIP”) financing to be provided by an affiliate of Brookfield Asset Management ("Brookfield," the Debtors' ultimate parent and Plan sponsor) consisting of (a) a $50.0mn new money term loan facility ($25.0mn interim) and (b) a $20.0mn roll-up of bridge financing provided by Brookfield in January 2022 and (ii) use cash collateral [Docket No. 18, with a revised proposed interim DIP order filed at Docket No. 50].

The DIP Credit Agreement is attached as Exhibit D to the DIP motion.

On August 12, 2022, Altera Infrastructure L.P. and 37 affiliated debtors (fka “Teekay Offshore Partners L.P.,” and together “Altera*” or the “Debtors”) filed for Chapter 11 protection with the U.S. Bankruptcy Court in the Southern District of Texas, lead case No. 22-90130 (Judge Isgur). At filing, the Debtors, “a global energy infrastructure services partnership primarily focused on the ownership and operation of critical infrastructure assets in the offshore oil regions of the North Sea, Brazil and the East Coast of Canada,” noted estimated assets between $1.0bn and $10.0bn; and estimated liabilities between $1.0bn and $10.0bn ($1.6bn of funded debt, see table below).

*Altera's preferred units trade on the New York Stock Exchange under the symbols "ALIN PR A", "ALIN PR B" and "ALIN PR E", respectively.The Debtors are controlled by Brookfield Asset Management which purchased what was then known as Teekay Offshore in January 2020 and rebranded the acquired business as Altera.

The DIP motion states, “The Debtors commenced these chapter 11 cases to consummate the comprehensive balance sheet restructuring embodied in the restructuring support agreement dated as of August 12, 2022 (the ‘Restructuring Support Agreement’), a copy of which is attached to the First Day Declaration as Exhibit A.

To facilitate the Debtors’ implementation of the restructuring transactions embodied in the Restructuring Support Agreement, the Debtors secured commitments from Brookfield to provide the proposed $70 million facility (the ‘DIP Facility’), which features several favorable terms. Most notably, the DIP Facility is being provided on a junior basis with respect to the Prepetition OpCo Collateral, such that no secured lender other than Brookfield will be primed by the DIP Facility. Further, the DIP Lenders have agreed that the proposed DIP Facility will be equitized pursuant to the restructuring transactions contemplated by the Restructuring Support Agreement (unless repaid from the proceeds of an equity rights offering).

The DIP Facility includes a $50 million superpriority new money term loan facility and a ‘roll up’ of $20 million of the outstanding principal balance under the $32 million secured revolving credit facility at IntermediateCo (the ‘IntermediateCo RCF’). The IntermediateCo RCF was provided by Brookfield prepetition to bolster the Debtors’ liquidity and to allow the Debtors time to hold the negotiations that resulted in the Restructuring Support Agreement, and is one of the central pillars of the restructuring transactions described in the Restructuring Support Agreement. The DIP Facility, which is junior to Prepetition OpCo Debt and was critical to the Prepetition OpCo Secured Parties’ support for the Restructuring Support Agreement, not only is an integral component of the Debtors’ ability to commence these chapter 11 cases in a coordinated fashion with significant consensus, but also provides the Debtors with the liquidity necessary to implement their restructuring and emerge from these chapter 11 cases as a going concern.

As described in the First Day Declaration, beginning early this year, the Debtors and their advisors commenced discussions with Brookfield and the Prepetition OpCo Secured Parties in an effort to generate support for a comprehensive balance sheet restructuring. The Debtors have sought, among other things, maturity extensions, amortization and interest relief, and the compromise of certain unsecured guarantees issued by Altera Parent in support of the Prepetition OpCo Secured Debt. These discussions continued for several months during the course of 2022."

On efforts to secure funding elsewhere, the DIP motion continues, "…as described in the D’Souza Declaration, on August 1, 2022, Altera Parent’s disinterested directors (the ‘Restructuring Committee’) authorized Evercore to solicit third-party lenders for debtor-in-possession financing proposals. The Debtors did not receive any interest—ultimately, no party was willing to extend junior debtor-in-possession financing on any terms, much less on better terms than Brookfield, and the Debtors did not believe it was viable or prudent to seek approval of senior debtor-in-possession financing and engage in a non-consensual priming fight with the Debtors’ secured lenders. Accordingly, the Debtors and their advisors focused their efforts on negotiating the DIP Facility with Brookfield. These efforts bore fruit, and, after nearly three months of arm’s-length negotiations, the proposed DIP Facility provides the Debtors with $50 million of liquidity to use during the pendency of these chapter 11 cases, with $25 million available following entry of the Interim Order, and the remaining available following entry of the Final Order. Notably, the DIP Facility is provided on a junior basis in that it does not prime the Bank Facilities. This was a crucial concession by Brookfield vis-à-vis the Prepetition OpCo Secured Parties and is yet another indicator of their willingness to support the Debtors on a go-forward basis. Further, the proposed DIP Facility will be equitized pursuant to the terms of the Restructuring Support Agreement (unless repaid from the proceeds of an equity rights offering).

Access to the DIP Facility is critical to signal to the Debtors’ customers, vendors, and employees that operations can and will continue in the ordinary course during the reorganization process. This is particularly important to the foreign vendor base who is less familiar with the chapter 11 process and will be particularly focused on ensuring the Debtors have sufficient liquidity and authority to continue payments in the ordinary course of business during the pendency of these chapter 11 cases. See id. In addition, vendors who are not paid may be able to assert additional mechanics liens or other priming claims, particularly in foreign jurisdictions. Without the DIP Facility and ability to use Cash Collateral, the Debtors will experience extensive disruptions and delays on existing projects, irreparable damage to customer relationships, including with counterparties with whom the Debtors are in negotiations regarding new, valuable contracts, and permanent disruption to vendor relationships, increasing operating costs, and requiring additional liquidity to convince vendors to perform.”

As of the Petition date, the Debtors were liable for approximately $1.6bn in aggregate principal amount of funded debt obligations, and, through Altera Parent, had issued approximately $408.0mn of outstanding preferred equity. In addition, the entities comprising the Shuttle Tankers business, the FPSO joint ventures, and certain other non-Debtors are liable for approximately $2.1bn in additional funded debt obligations. The table below summarizes the prepetition capital structure of the Debtors and that of Altera Parent’s affiliated non-Debtor subsidiaries: 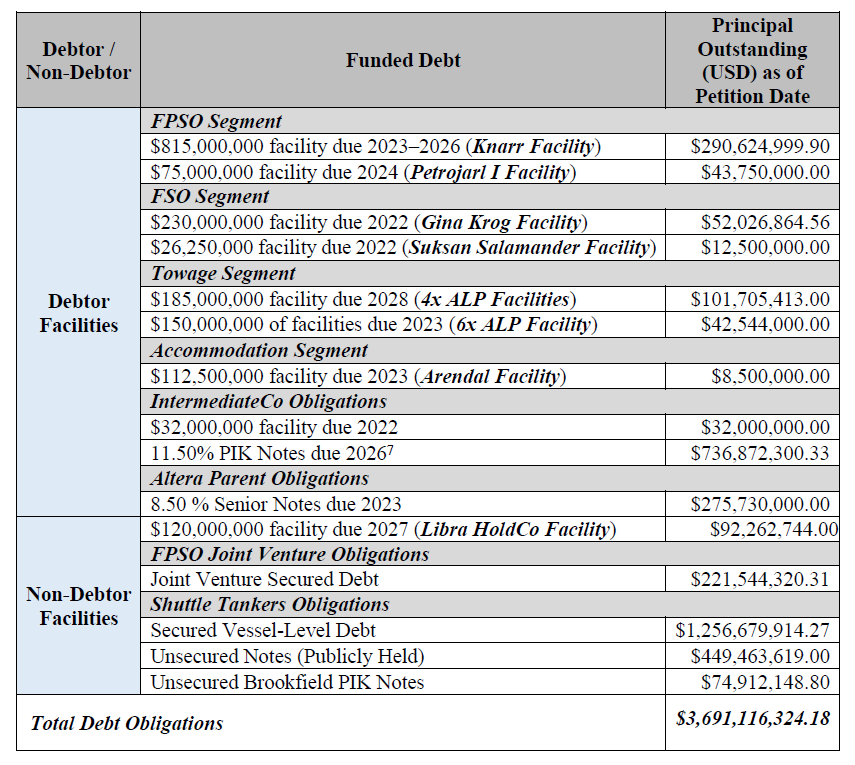 According to the Debtors: “Altera Infrastructure L.P. is a leading global energy infrastructure services partnership primarily focused on the ownership and operation of critical infrastructure assets in the offshore oil regions of the North Sea, Brazil and the East Coast of Canada. Altera has consolidated assets of approximately $3.8 billion comprised of 44 vessels, including floating production, storage and offloading (FPSO) units, shuttle tankers, floating storage and offtake (FSO) units, long-distance towing and offshore installation vessels and a unit for maintenance and safety (UMS). The majority of Altera’s fleet is employed on medium-term, stable contracts."

The Declaration adds: "Altera is a leading international midstream services provider to the oil and gas industry, supplying critical infrastructure assets to its customers primarily in offshore regions of the North Sea, Brazil, and the East Coast of Canada. Altera has approximately 2,450 employees who either serve as crew or in onshore support roles for Altera’s 41 vessels around the world.

The Debtors consist only of FFTA entities. The FPSO joint ventures and the Shuttle Tankers entities are not Debtors in these chapter 11 cases."

Capital Structure (see also Exhibit B to Docket No. 17 for a second more detailed/complete chart]

Altera’s corporate and capital structure, along with the goals of its restructuring process, are summarized in the chart below.