As noted in "Corporate Structure" below, the Debtors' are indirectly controlled by potential DIP lender AES Andes which is in turn 67% owned by Virginia-based AES Corporation (NYSE: AES). In a November 17th 8-K, AES Corporation stated that: "On November 17, 2021, AES Andes announced that its subsidiary Alto Maipo SpA ('Alto Maipo') has commenced a reorganization proceeding in accordance Chapter 11 of the U.S. Bankruptcy Code, through a voluntary petition that was filed today (the “Chapter 11 Proceeding”). The AES Corporation (the “Company”) is no longer considered to have control over Alto Maipo and, therefore, in accordance with ASC 810-10-15-10, will derecognize from its Consolidated Statement of Financial Position the assets and liabilities of Alto Maipo and recognize an after-tax loss of approximately $800 million – $1 billion, net of non-controlling interests, in the Consolidated Comprehensive Income Statements for the fourth quarter of 2021, associated with the loss of control attributable to the former controlling interest.

In a press release announcing the filing, the Debtors advised that: “Alto Maipo SpA has filed for Chapter 11, Title 11 of the United States Code through a Pre Arranged financial restructuring agreement [although see below as to some doubt as where any support agreement stands] reached with its creditors, with the aim of initiating a financial reorganization process.

This process is intended to create a sustainable long-term capital structure maximizing recovery for all of its creditors and ensuring the liquidity necessary to
meet the short-term obligations for the start-up of the project.

The reasons for this decision are linked to the circumstances previously communicated, when it was informed about the update of studies and market and
hydrology projections prepared by independent experts. These estimate a reduction of more than 50% in the price of energy in different scenarios, considering the incorporation of multiple renewable projects to the national electricity system and in a time frame that was not foreseen years ago. Likewise, there was a significant decrease in hydrology in the last 10 years, compared to the historical average, which could mean a reduction in the expected annual generation of the project.

Alto Maipo is currently 100% complete in the excavation of its tunnels and 99% complete overall. Its construction will be completed within the costs estimated in its
last restructuring and approximately one year ahead of the dates guaranteed in the current construction contracts.”

In a declaration in support of the Chapter 11 filings (the “Dib Declaration”), Javier Dib, the Debtors’ Board President and Chief Restructuring Officer, detailed the events leading to Alto Maipo's Chapter 11 filing which in short comes down to (i) a 50% drop in electricity prices, (ii) a climate change-induced 50%* drop in the power generating capacity of the Debtor's hydroelectric facility (see more below on less snowfall and reduced water flows) and (iii) project costs that have run 70% over budget.

The Dib Declaration provides: “Unfortunately, the energy market that Alto Maipo will enter into next year is not the same energy market that Alto Maipo projected would exist upon its initial Commercial Operation Date (the ‘COD’) when construction began in 2013. Since that time, there have been significant shifts both on the supply and demand side that have rendered Alto Maipo’s existing capital structure unsustainable. On the demand side, increased generation capacity has driven down electricity prices in Chile, such that spot prices at which Alto Maipo could sell power are now less than half of what they were in 2013. On the supply side, climate change has significantly impacted the hydrology of the Maipo Valley, where the Project is being constructed, and lower precipitation levels reduce in turn the amount of power that the Project can produce. As a result, Alto Maipo can no longer rely on its prior revenue projections, which assumed economic and environmental factors that are no longer in place.

Additionally, the cost of construction for the Project has increased by approximately 70% from Alto Maipo’s initial projections, due to unexpectedly difficult geological conditions as well as delays caused by certain of Alto Maipo’s contractors. These increased construction costs necessitated two prior restructurings that significantly increased the amount of debt owed by Alto Maipo to its creditors. These prior restructurings, however, were based on revenue projections that did not take into account the worsening hydrology and market conditions that have become apparent in the years since. As a result, the capital structure created through these prior restructurings is no longer sustainable.”

Drilling down on the impact of climate change, the Dib Declaration provides: "Even more problematic for the Project’s estimated revenue, however, is the significant impact that climate change has had on the energy supply available to the Project. The tributary rivers whose flow will power the Hydroelectric Plants begin at the peaks of the Andes Mountains, and are primarily fed by seasonal snowmelt from the glaciers on these peaks.

Unfortunately, in recent years, climate change has had a devastating impact on precipitation in the Andes Mountains, with the result that the rivers that will supply the Project have experienced a steep decline in overall water flow.

In order to assess the impact that climate change and the attendant decrease in precipitation will have on the Project, Alto Maipo commissioned a report by Systep to evaluate the long-term projections for expected generation and energy market prices (the “Market Report”).

According to the Debtors: “Alto Maipo is a special purpose company, incorporated under Chilean law for the purpose of developing, constructing, and operating a run-of-river hydroelectric energy project in the Santiago Metropolitan Region of Chile, approximately 30 miles southeast of the city of Santiago. The hydroelectric energy project that is presently under construction (the 'Project') will consist of two run-of-river hydroelectric plants (the 'Hydroelectric Plants') which, once completed, will provide significant zero-emissions energy to Chile’s electric grid…Construction of the Project is currently expected to reach commercial operation in the first half of 2022, after which Alto Maipo will provide clean, renewable energy to power Chile’s economy." 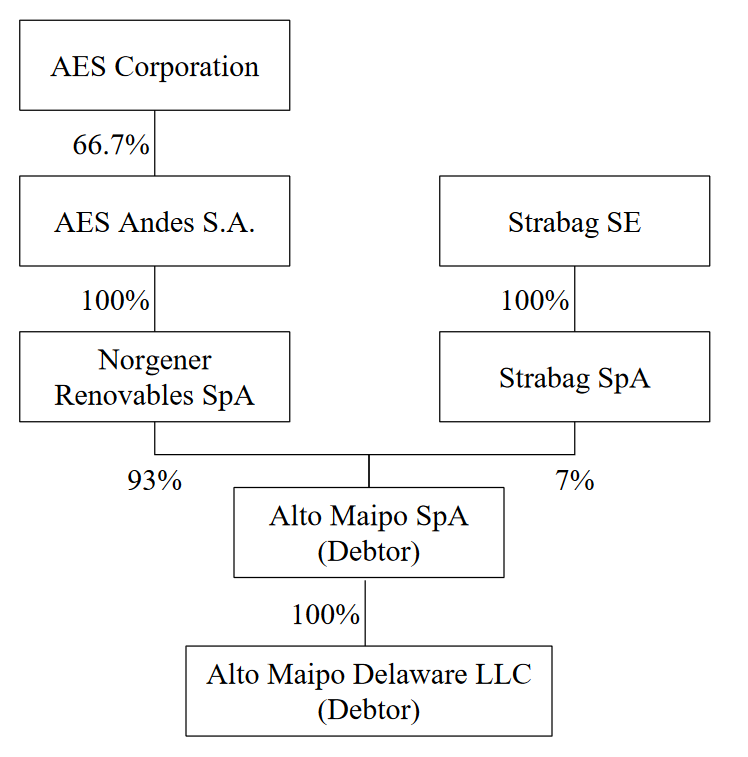