December 11, 2020 – Privately-held American Purchasing Services, LLC and three affiliated Debtors (d/b/a American Medical Depot; “American Purchasing” or the “Debtors”) filed for Chapter 11 protection with the U.S. Bankruptcy Court in the Southern District of Florida, lead case number 20-23495. The Debtors, "a premier supplier to the surgical and medical industry," are represented by Paul Steven Singerman of Berger Singerman LLP. Further board-authorized engagements include (i) CR3 Partners as restructuring advisors (with CR3's Dennis Gerrard to serve as as Chief Restructuring Officer) and (ii) Prime Clerk as claims agent.

The Debtors’ lead petition notes between 200 and 1,000 creditors; estimated assets between $10.0mn and $50.0mn; and estimated liabilities between $50.0mn and $100.0mn. Documents filed with the Court list the Debtors’ three largest unsecured creditors as (i) Becton Dickinson Bd Supply Chain Services ($6.4mn trade claim), (ii) Stryker Communications ($5.4mn trade claim) and (iii) Bosma Industriesfor the Blind ($5.9mn trade claim). The Debtors note that they owe approximately $51.0mn in general unsecured debt to about 450 non-insider creditors, of which about $30.0mn is owed to 9 vendors.

The Debtors list WC, AMD LLC (an affiliate of Wynnchurch Capital) as a significant shareholder without disclosing that affiliate's exact equity position. Wynnchurch, which is also part of a junior lender group that is owed $32.0mn, lists the Debtors as a portfolio company, with their equity position resulting from a 2018 debt restructuring  which followed on an earlier $85.0mn restructuring led by White Oak Global Capital Advisors in 2017.

The Gerrard Declaration (defined below) provides: "The Debtors’ objectives in their Chapter 11 Cases is to stabilize their operations and liquidate their assets in an orderly manner to ensure the highest value for all of the Debtors’ stakeholders."  Elements of that process include: "(i) a bulk sale of approximately $19 million in inventory, of which approximately $5 million is attributed to inventory purchases AMD was required to make in order to service the VA hospitals under the NG Contract and bridge contract, but which the VA ultimately failed to order and purchase, and over $10 million of which is attributed to inventory purchases by AMD for the VA that were not part of the NG Contract or bridge contract; (ii) collection of accounts receivable totalling approximately $15 million, of which over $3.1 million is owed by the VA for inventory ordered and received under the NG Contract; (iii) selling other assets, such as government contracts, subject to the satisfaction of governmental agency requirements; and (iv) selling intellectual property, including patents and/or patented products."

In a declaration in support of the Chapter 11 filing (the “Gerrard Declaration”), Dennis Gerrard, the Debtors' Chief Restructuring Officer, detailed the events immediately leading to the Debtors Chapter 11 filings; with that focus being on the impact of COVID-19 on the Debtors' clients, particularly on a decrease of "voluntary and non-emergency surgical and medical procedures" and a corresponding decrease in orders from its established client base (most significantly from the Veterans' Administration or "VA"). That focus on COVID-19 is notwithstanding the fact that the Debtors have not operated any of their four principal lines of business since the end of August 2020.

According to Gerrard, who does not provide detail as to the two financial restructurings that occurred during the five-year arrangement with the VA or why the Debtors were so reliant on credit lines more than four years into a $1.2bn contract, the VA is the villain here; requiring the Debtors to purchase (on credit) and stockpile inventory which the VA then failed to actually buy (as noted above, that unbought inventory is valued by the Debtors at a modest $5.0mn).

How and why was a major supplier of medical equipment (Wynnchurch describes its portfolio company as "a premier supplier to the surgical and medical industry that serves both the acute care and alternate site markets, including key facilities of the U.S. Government") which (i) had risen from relative obscurity (beginning with a "one bay door warehouse") to land a five-year contract with the federal government worth $1.2bn and which (ii) sat comfortably between the U.S. Government and an extensive network of trade suppliers, felled by COVID-19 rather than being in a position to benefit from a global scramble for medical supplies, notably by its largest client, during an historically unprecedented pandemic?

How did the Debtors end up owing trade creditors $51.0mn in respect of medical supplies which they were charged with sourcing for a very large, repeat business client (the U.S. Government representing 85% of the Debtors' business)?

According to the Gerrard Declaration, in 2016, the VA awarded the Debtors a "Next Generation Medical Surgical Prime Vendor Contract ('MSPV NG Contract' or 'NG Contract') to service 70 hospitals along the east coast of the United States with an estimated value of $1.2 billion over five years.

As of late August 2020 through present, the Debtors no longer operate any of the four lines of business and, rather, have focused exclusively on selling their assets and collecting accounts receivable in order to, among other things, pay down their secured debt in accordance with their loan documents."

The Declaration continues: "The Debtors have experienced significant delays in collecting accounts receivable and in selling inventory due to the negative economic impact of Covid-19 on the healthcare products distribution industry commencing in the second calendar quarter of 2020 and continuing thereafter. Significantly, a material percentage of voluntary and non-emergency surgical and medical procedures has been cancelled or indefinitely deferred during this period, and this has materially reduced the payment and purchasing performance of the Debtors’ customers.

Additionally, in 2016, AMD was awarded and began performing under the VA’s MSVP NG Contract, which lapsed on April 1, 2020, but was to include two additional bridge contracts emanating therefrom; one to end in September 2020 and the other to end in March of 2021. The VA, however, chose to terminate the first bridge contract effective August 1, 2020, about 2 ½ months early. Under the NG Contract and bridge contract, AMD was required to maintain necessary inventory levels to provide the required supplies to participating VA facilities. That meant that after the VA reviewed and approved usage amounts of products on a monthly basis, AMD was required to purchase the inventory using its bank credit and store it in its warehouses until the VA facilities affirmatively ordered the products for delivery. With increasing frequency, however, the VA facilities failed to purchase the inventory that they forecasted was needed. Consequently, AMD’s operations and finances were severely impacted because AMD utilized about $17 million of its working capital line of credit for purchases of inventory. Much of that inventory remains stockpiled at Debtors’ distribution centers and, thus, is not being sold at the wholesale prices anticipated, while the Debtors continue to pay interest to the bank on the debt they incurred for those inventory purchases."

The Debtors have requested Court authority to continue an existing contractual relationship with Tiger Capital Group, LLC (“Tiger”) which has been assisting the Debtors with inventory sales since September 2020. Tiger was initially retained by the Debtors in order to conduct three private bulk sales of inventory before turning its efforts to online auctions of remaining inventory. Tiger is preparing for four additional auctions to occur post-petition through mid-January 2021 at the Debtors’ warehouses. Tiger operates under an expense budget, which was initially funded in the amount of $60k and charges and retains a commission totaling nine percent of all sales.

The Debtors are party to a a revolving line of credit (the “Revolver”) with Wells Fargo Bank, National Association, as agent. The Revolver is secured with a lien on virtually all of the Debtors’ assets and, as at the Petition date, outstanding borrowings under the Revolver were approximately not less than $10.5mn.

Debtors are also party to junior secured facility with WC AMD, LLC as agent and , SOLIC AMD Investco, LLC, and Aman Capital LLC, also amongst the lending group (collectively, the “Junior Lenders”). The Junior Lenders also have a lien on virtually all of the Debtors’ assets, albeit subordinated to the Revolver pursuant to an intercreditor agreement. At the Petition date, there was approximately $32.9mn outstanding in respect of this junior facility.

According to the Debtors [the Debtors' website not functioning as at the Petition date]: “AMD is a premier supplier to the surgical and medical industry that serves both the acute care and alternate site markets, an increasingly important capability as healthcare providers build integrated delivery networks. The company has operations and warehouse locations in Miramar, FL, Tampa, FL, King of Prussia, PA, Schenectady, NY, Whitsett, NC and Puerto Rico. The company has approximately 180 employees, 3,000 customers, 2,000 suppliers and offers 400,000 SKUs. 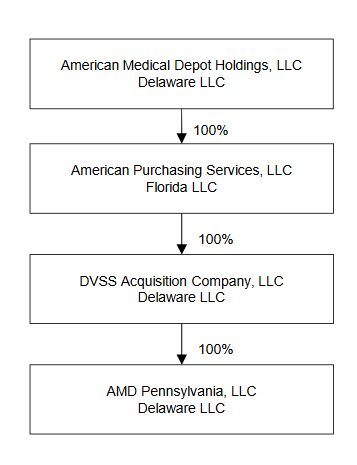