December 30, 2020 – The Debtors filed their Third Amended Plan of Reorganization, with technical modifications representing changes to the solicitation version filed on November 23, 2020 [Docket No. 1403].

The Debtors’ Plan confirmation hearing, initially scheduled for January 14, 2021, has been adjourned and is now scheduled for February 25, 2021 [Docket No. 1405]. The Debtors' asset sale motion, filed on November 25, 2020, indicated that the confirmation hearing would be adjourned until February 19, 2021 at the earliest if the sale closes [Docket No. 1212].

The Third Amended Plan adds details related to the Debtors' sale transaction and noted an increase of the cash component of GUC Trust assets to $7.25mn from $6.5mn.

The Debtors' Memorandum [Docket No. 1136] provides the following pre-confirmation hearing overview: “The Debtors stand poised to achieve a remarkable result — confirmation of a chapter 11 plan of reorganization that will deleverage their balance sheet by approximately $1 billion, preserve the business as a going-concern, save thousands of jobs and position the Debtors to meet their long-term strategic goals, thereby enabling the Debtors to continue their focus on generating profitable growth and driving value for customers and stakeholders alike. Both prior to and throughout the chapter 11 cases, the Debtors engaged in good-faith, hard-fought negotiations with their key constituents on the terms of this restructuring. The Plan is a culmination of those robust discussions and has been accepted by substantially all Classes, including by holders of approximately 97.25% of the Debtors’ outstanding Term Loan Claims. The overwhelming support for the value-maximizing transactions embodied in the Plan has provided the Debtors with a clear and viable path to exit from chapter 11 and achieve long-term financial success.

The Plan incorporates the terms of a global settlement among every major creditor constituency in the case, receiving support from the ABL Lenders, the Term Loan Lenders and the Creditors’ Committee. In light of the extremely difficult circumstances caused by the COVID-19 pandemic, the Debtors were forced to file for chapter 11 to realize the benefits of their Strategic Plan, which contemplated a substantial rationalization of the Debtors’ brand and store fleet portfolio, a realignment of distribution capabilities and implementation of various other cost saving measures.

The terms of the Debtors’ restructuring are embodied in the Restructuring Support Agreement (the ‘RSA’), dated as of July 23, 2020 and amended as of September 9, 2020, which contemplates a series of restructuring transactions – ultimately embodied in the Plan – that will (if consummated) equitize over $1 billion of the Debtors’ outstanding Term Loans, repay DIP, administrative and priority claims in full, provide for a pro rata share of certain cash and specified litigation proceeds to the Debtors’ general unsecured creditor constituency and provide two committed exit facilities necessary to execute the Debtors’ go-forward business plan. At the time of execution, the RSA had the support of certain Term Loan Lenders holding approximately 68% of the outstanding principal amount under the Term Loan Agreement and, following an amendment and a number of additional Term Loan Lenders signing joinder agreements to become Consenting Stakeholders, support for the RSA grew to approximately 94.62% of the outstanding Term Loan Claims.

Additionally, on September 8, 2020, the Debtors agreed to a Global Settlement with the Creditors’ Committee, the Consenting Stakeholders and the DIP Lenders, the terms of which include the support of the Creditors’ Committee in favor of the Plan. All of the ABL Lenders have also agreed to vote in favor of the Plan and support the Debtors’ emergence by committing to fund an asset-based lending revolving exit facility. Largely, as a result of the substantial support secured through the Debtors’ extensive efforts to build consensus, the Debtors are set to achieve confirmation of the Plan….

The amended Disclosure Statement [Docket No. 565] provides, “The pre-negotiated restructuring will deleverage the Debtors’ balance sheet by more than $1 billion and provide for an infusion of $150 million in new money…If the Plan is confirmed, Ascena will shed more than $1 billion of funded debt upon emergence from these Chapter 11 Cases.  Ascena’s pro forma exit capital structure will consist of (a) a $400 million Exit ABL Facility, (b) a $311.8 million First Out Exit Term Loan Facility, (c) a $88.2 million Last Out Exit Term Loan Facility and the New Common Stock.

The following is an updated summary of classes, claims, voting rights and expected recoveries (defined terms are as defined in the Plan and/or Disclosure Statement, see also the Liquidation Analysis below):

On November 13, 2020, the Debtors' claims agent notified the Court of the Plan voting results [Docket No. 1135], which were as follows:

On December 8, 2020, the Court issued an order approving the $540.0mn private sale of the Debtors' remaining businesses, comprised of the Lane Bryant brand and the Premium business segment (the latter including Ann Taylor, LOFT, and Lou & Grey brands) to Premium Apparel LLC (the “Buyer”), an affiliate of Sycamore Partners Management, L.P. (collectively, “Sycamore”) [Docket No. 1295]. The Sycamore asset purchase agreement (the “APA”) is attached to the order at Exhibit 1 (also attached are the related Assumption Agreements, the Bills of Sale and Assignment Agreements, the Intellectual Property Assignment Agreements,  and the Escrow Agreement).

In a press release announcing the proposed transaction, the Debtors stated: "Premium Apparel will acquire the brand assets for a purchase price of $540 million, on a cash-free and debt-free basis, subject to certain adjustments, and the assumption of certain liabilities. Under the APA, Premium Apparel has committed to retaining a substantial portion of the retail stores and associates affiliated with these brands.

According to the Memorandum, the Debtors believe that they have resolved, or will be able to resolve, all Objections with the exception of an Objection filed by the United States Trustee [Docket No. 746], the objection by the U.S. Securities and Exchange Commission [Docket No. 849] and the Securities Lead Plaintiffs’ Objection [Docket No. 889]. The document states, “For the reasons that will be set forth in their reply brief that will be filed prior to the Confirmation Hearing, the Debtors respectfully request that the Court overrule the remaining Objections and confirm the Plan.”

The U.S. Trustee’s Objection acknowledges that some issue’s previously raised were resolved, but notes that “The Amended Plan in its current form cannot be confirmed because the assumption of insider benefit programs violates section 1129(a)(1), the proposed third-party releases and exculpation clauses are overly broad and the deemed acceptance voting provision is inappropriate. Confirmation should be denied. Alternatively, the Court should strike the offending provisions from the Plan.”

The SEC states in its objection that the Plan should not be confirmed, “because the Plan contains a third-party release, binding upon the Debtors’ public shareholders, that does not meet the standard for approval in this Circuit. Under the Plan, shareholders will receive nothing, their shares will be canceled and they are not allowed to vote. As if that is not bad enough, the Debtors further seek to bind shareholders to a third-party release that would eliminate whatever remaining rights they may have as shareholders against non-debtors. This includes claims arising from egregious conduct, such as fraud, willful misconduct, breach of fiduciary duty and violations of securities laws.

Under Fourth Circuit law, third-party releases must be essential to the reorganization and fair, and thus, releases should be approved cautiously and infrequently. The release in this case falls far short of that standard. The release by shareholders clearly is not essential to the reorganization because the Debtors have implemented a process that allows shareholders to opt out of the release, and the Plan may be confirmed regardless of how many shareholders opt out. Further, the release is not fair because the shareholders are not receiving any meaningful consideration in exchange for the release, and the parties protected by the release are contributing nothing of value that will benefit the shareholder class. Recognizing that the third-party release is neither essential nor fair, the Debtors apparently are seeking to avoid the ‘fair and essential’ standard entirely, by arguing that the release is ‘consensual.’ According to the Debtors, any shareholder who fails to timely return an opt-out form is voluntarily electing to be bound to the release. This position, however, is unsupportable because (i) no reasonable shareholder would agree to be bound to a release (that covers all types of conduct, including fraud) in exchange for nothing, and (ii) the prevailing view in this District and elsewhere is that ‘consent’ requires an affirmative act, not mere silence.”

In addition, the Amended Plan cannot be confirmed because it does not disclose whether or how the Debtors intend to preserve evidence potentially relevant to the Securities Litigation after the Effective Date of the Amended Plan; and does not disclose whether or how Lead Plaintiffs and the Proposed Class will be able to pursue Class Claims against the Debtors to the extent of available insurance.”

The following documents were attached to the Disclosure Statement [Docket No. 565]: 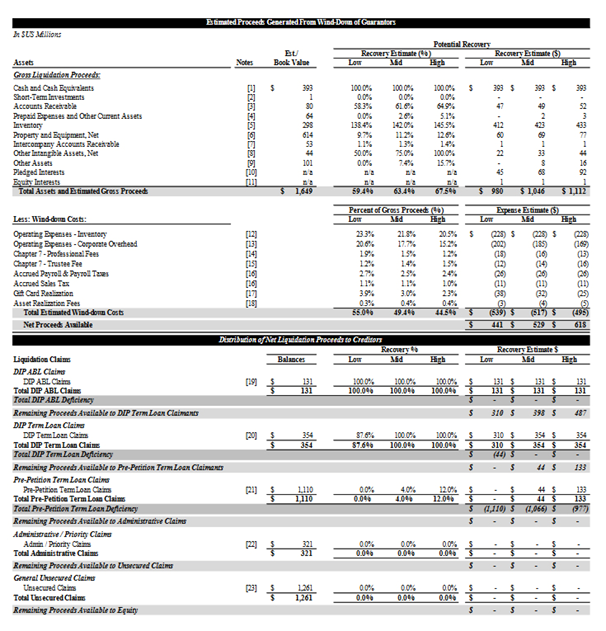 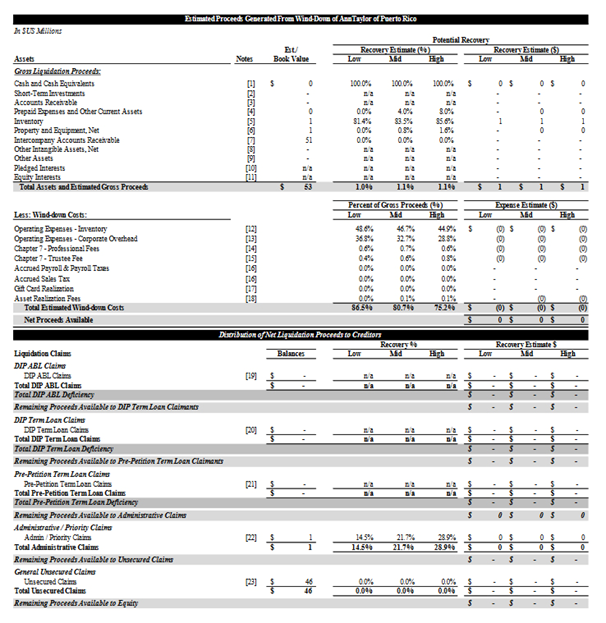 Pet Valu Shuts Down US Operations