In a press release announcing the current filings, Borden advised that: “The Company intends to use the court process to pursue a financial restructuring designed to reduce its current debt load, maximize value and position the Company for long-term success.”

Borden’s  CEO Tony Sarsam added: "Borden is EBITDA-positive and growing, but we must achieve a more viable capital structure…the Company continues to be impacted by the rising cost of raw milk and market challenges facing the dairy industry. These challenges have contributed to making our current level of debt unsustainable. For the last few months, we have engaged in discussions with our lenders to evaluate a range of potential strategic plans for the Company. Ultimately, we determined that the best way to protect the Company, for the benefit of all stakeholders, is to reorganize through this court-supervised process."

The Monaco Declaration does an excellent job of covering the numerous operational and competitive pressures faced by the dairy industry [borrowing liberally from the Dean Foods declaration, see Dean Foods' Docket No. 46 for further sector background], noting the confluence of (i) rising prices for raw milk (up 27% since January 2019), (ii) declining margins for retail milk products as competition intensifies from discount grocery retailers and vertically integrated competitors in a position to dominate shelf space with private label products (and use loss leader pricing strategies), (iii) changes in consumer preferences which have included a shift towards alternative "milk" products, (iv) increases in transportation and fuel costs and (v) growing pension fund obligations. All of the above ultimately cutting net income to a point where the Debtors can no longer service interest payments in respect of their existing credit facilities.

The Monaco Declaration's most brutal reality, however, is this: people are simply drinking less milk. Consumption is down 6% since 2015 and over the last 45 years milk consumption has staggeringly "declined by over 100 gallons per person in North America."

The Monaco Declaration states: "Like other milk producers and distributors, Borden is facing a multi-year trend of shrinking margins and increasing competition. These negative trends have been exacerbated by declining margin over milk at retail even as the price of raw Class 1 milk has been increasing.

Despite Borden’s best efforts over the past several years, its current obligations under the Credit Agreement have severely limited its ability to produce positive net income. The Debtors have paid approximately $21 million per year in cash interest over the past several years, a burden that can no longer be serviced by the Company’s underlying earnings and cash flow. The Credit Agreement also requires Borden to make quarterly payments totaling $2.35 million each year on the Term Loan A Facility, further depleting the Company’s operating cash.

The Debtors’ struggling financial performance over the past two years is directly correlated to the milk processing industry’s highly competitive nature, rapidly-changing industry landscape, and dynamic retail environment. In recent years, dairy products have begun to compete with other replacement non-dairy nutritional products and beverages for consumer sales, which has contributed to demand decreases. In addition, the growth of discount grocery retailers has intensified competition and reduced the margin over milk at retail, making it increasingly difficult for Borden to hold its margin while competitively pricing its products to appeal to consumer price sensitivities. Borden competes against others that do not depend on the profitability of milk exclusively, including vertically-integrated retailers and dairy cooperatives that now process their own milk.

While milk remains a household item in the United States, people are simply drinking less of it. Aggregate U.S. consumption of conventional dairy milk has declined approximately 6 percent since 2015. In parallel, since the turn of the century, the number of U.S. dairy farms has rapidly declined. From 1992 to 2018, over 94,000 family dairies closed their doors at the rate of 10 dairy farms per day. In the past year and a half alone, over 2,730 dairy farms have gone out of business.

Concurrent to the decline of the number of milk producers, dairy processers have seen bottling margins decline due to competitive pressures from milk suppliers and large (and sometimes vertically integrated) customers. Couple this with the fact that for the past forty-five years consumption has steadily declined by over 100 gallons per person in North America, and it is no surprise that Borden and other dairy suppliers (such as Dean Foods) have begun to feel the same negative effects that have plagued dairy farmers for the past decade.

The decline in dairy sales has occurred in conjunction with the rise of oat, nut, soy, and other alternative ‘milk’ products at retailers and food service locations across the country. Options like almond, soy, rice, coconut, and hemp beverages are beginning to demand more and more space on grocery store shelves as consumers have grown to embrace new flavors and alternative diets. Sales of nut and plant beverages grew by 9% in 2018 and had sales of $1.6 billion, according to the Plant Based Foods Association.

[T]he price of conventional raw milk has risen 27 percent since January 2019. This increase in the cost of milk to supply the Debtors’ operations is at odds with the downward trend of prices for the end user (as discussed in further detail below). The Debtors expect further raw milk inflation in 2020.

Consolidation in the retail sector has given a few retailers and supermarket chains considerable buying power. This trend combined Competitors on both ends of value chain vertically integrating leads to further margin compression. Over the past two years, some of the Debtors’ large format retail customers have become more vertically integrated?meaning they have bought or built processing assets to compete with the Debtors.In addition, some of Borden’s suppliers have invested in processing assets to combat the contracting market pressures felt by dairy farmers.

This has resulted in two negative consequences. First, retailers that are vertically integrated typically re-dedicate key shelf-space that was formerly occupied by branded products for their own private label products. Accordingly, customer awareness at major food service retail establishments has decreased, which in turn has muted the marketing and sale initiatives implemented by the Debtors in the past two years. Second, by expanding up and down the value chains, these retailers and suppliers enjoy the benefits of broader profit pools while relying on smaller profit margins. Retailers have aggressively priced their private label milk to drive foot traffic in their brick and mortar outlets. This trend has negatively affected the Debtors as it has required them to price their products more competitively, compressing already thin profit margins. These low margins are unsustainable for companies such as the Debtors who solely operate in the processing space. Since 2018, the Debtors have experienced a 31% decline in gross margin (inclusive of distribution costs).

The Debtors purchase diesel fuel to operate their extensive transportation fleet. In 2019, the Debtors spent approximately $22 million annually on fuel. Resin, a fossil fuel-based product, is another significant raw material input for Borden and is used to produce plastic bottles. Sustained, national driver shortages over the past few years have also added to freight costs by increasing the wage, overtime and temporary employee costs. 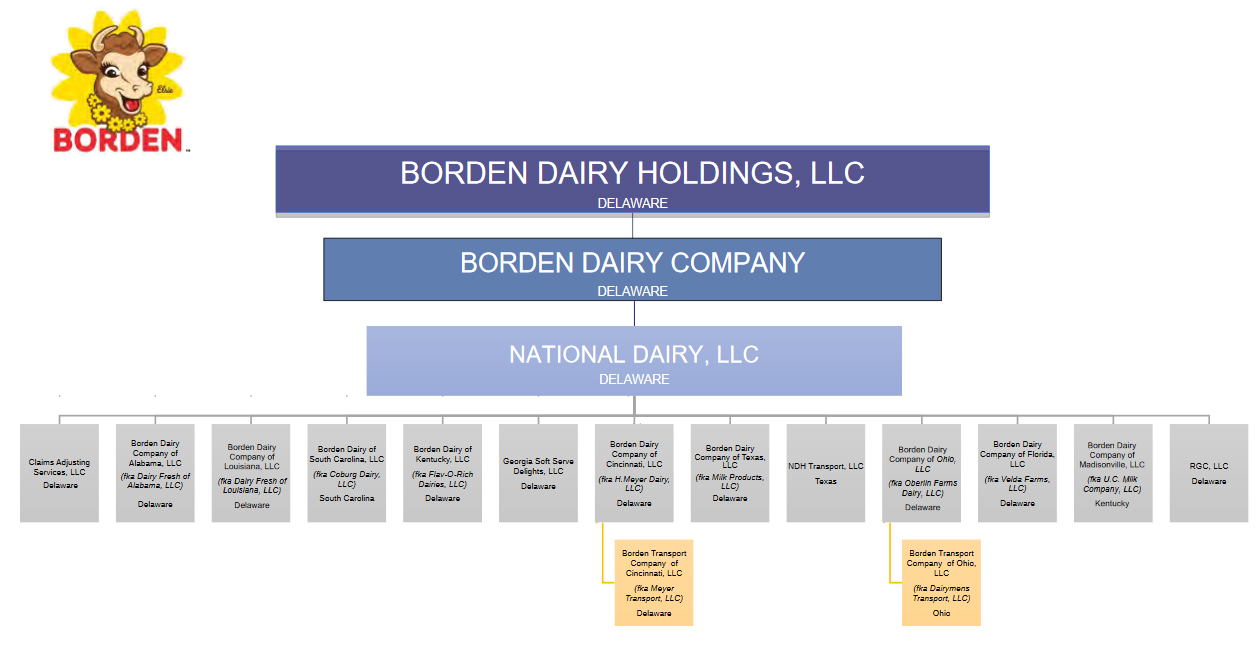 Operations: Founded in 1857 by Gail Borden, Jr., Borden is a heritage American brand that produces more than 35 wholesome and delicious products enjoyed by millions of people every day. Borden was the first company to develop a patent for the process of condensing milk, as well as the first company to use glass milk bottles. In 1936, Elsie became America's favorite spokes-cow, and was recognized in 2000 by AdAge as one of the top 10 advertising icons of the 20th century. Today, Borden is headquartered in Dallas and operates 12 milk processing plants and nearly 100 branches across the U.S. that produce and distribute nearly 500 million gallons of milk annually for customers in the grocery, mass market, club, food service, hospitality, school and convenience store channels. The company's People First culture has inspired decades of loyal tenure among hundreds of the 3,300 people Borden employs. In 2019, Borden landed the No. 16 spot on Forbes' list of America's Most Reputable Companies, highlighting the company's well-earned trust amongst consumers.

Recent Corporate History: By the 1980s, Borden Inc. was the world’s largest dairy operator, with sales exceeding $7.2 billion. It was also the nation’s most active participant in the M&A market in 1987 after making 23 acquisitions totaling $442.6 million. Before the end of the decade, Borden acquired an additional 39 operations. By the early 1990s, however, Borden Inc. began experiencing financial distress, resulting in a number of its business units being divested. In 1995, Borden Inc. was sold to Kohlberg Kravis Roberts & Co. (“KKR”) for $2 billion, and became a private company. Over the next decade, Borden Inc. underwent a series of reorganizations, which ultimately resulted in KKR selling off many of the divisions and brands of Borden Inc. to various buyers. 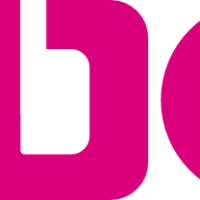