The Debtor commenced this Case to consummate a debt restructuring of the Debtor’s long-term obligations while also providing for continued and uninterrupted care of the Residents. As detailed below, in order to address its financial condition, the Debtor engaged in extensive, arm’s length negotiations with the Bond Trustee and the holders of at least sixty-nine percent (69%) of outstanding aggregate principal amount of all Secured Bonds issued (the “Consenting Holders”) with a goal of achieving a consensual restructuring, centered on a refinancing of the Secured Bonds (the “Bond Refinancing”).

The Disclosure Statement provides: "Under the Plan, the Debtor will implement the Restructuring Transaction, which provides, among other things, for the Debtor to restructure its debt obligations and continue to operate as it did prior to the bankruptcy Case, with the additional oversight and recommendations of Solutions Advisors Group (‘Solutions Advisors’), a nationally-recognized senior living consultant. In addition, the Debtor will receive new funding of $28.5 million represented by the Series 2021A Bonds to improve The Buckingham Facility, address immediate deferred capital needs and to provide additional working capital to allow The Buckingham to operate in the ordinary course. The proposed Plan achieves a value-maximizing debt restructuring that comprehensively addresses the Debtor’s debt obligations. As a broad overview, the Plan provides for a global compromise and settlement of all Claims, Causes of Action, and controversies.

As discussed below, Current Resident Claims are Unimpaired under the Plan, and are therefore conclusively deemed to accept the Plan, and are not entitled to vote on the Plan. Residents holding Charter Refund Obligation Claims will be paid in full on the Effective Date as set forth on Sche dule D to the Restructuring Term Sheet. Former Residents holding Pre-Petition Refund Queue Claims shall be paid in full at the times and in the amounts set forth in the Plan. The Debtor believes that the Plan provides the means for maximizing recovery for those Holders of Claims entitled to receive a distribution under the Plan. Perhaps most importantly, the Plan provides for the continued, uninterrupted care of the Residents throughout the bankruptcy process and beyond, and certainty regarding the Debtors’ future operations for all of the Debtor’s stakeholders including, the Debtor’s Residents, employees, and vendors."

The following is summary of classes, claims, voting rights and expected recoveries (defined terms are as in the Plan and/or Disclosure Statement, see also the Liquidation Analysis below):

While the Debtor and the Bond Trustee were able to negotiate a Forbearance Agreement to ameliorate Hurricane Harvey’s impact on the Debtor’s ability to operate, just as new Life Care Residents were occupying more Expansion Tower units, COVID-19 spread throughout the United States, having an outsized impact on the senior living industry, and deterring potential residents from entering the Facility.

Economic and natural phenomena outside of the Debtor’s control has limited The Buckingham’s ability to pay the obligations under its pre-petition capital structure. The Buckingham has also become the target of litigation as described in more detail below.”

As of the Petition date, on a book value basis, The Buckingham had approximately $345.1mn of liabilities, which consists of approximately:

The Debtor has arranged commitments for up to $3.4mn (interim) of debtor-in-possession financing to be provided by bond Trustee UMB Bank, N.A. with the pre-petition Bond Trustee agreed to the priming of its Pre-Petition Liens on the Pre-Petition Collateral in exchange for certain adequate protection assurances.

The Disclosure Statement attached the following:

The restructuring term sheet is attached at Schedule 1 of the Plan.

The Buckingham is a non-member nonprofit corporation with a self-perpetuating board of directors and has no equity security holders.

According to the Debtors: “The Buckingham, a Texas nonprofit corporation, owns and operates a 495-unit continuing care retirement community ('CCRC') comprised of 465,000 square feet of developed property on approximately 23 acres of land which opened in 2005. As of June 1, 2021, the Debtor employe d 370 employees (the 'Employees'). The Buckingham offers seniors a full continuum of care in one centralized campus-style setting throughout the aging process." 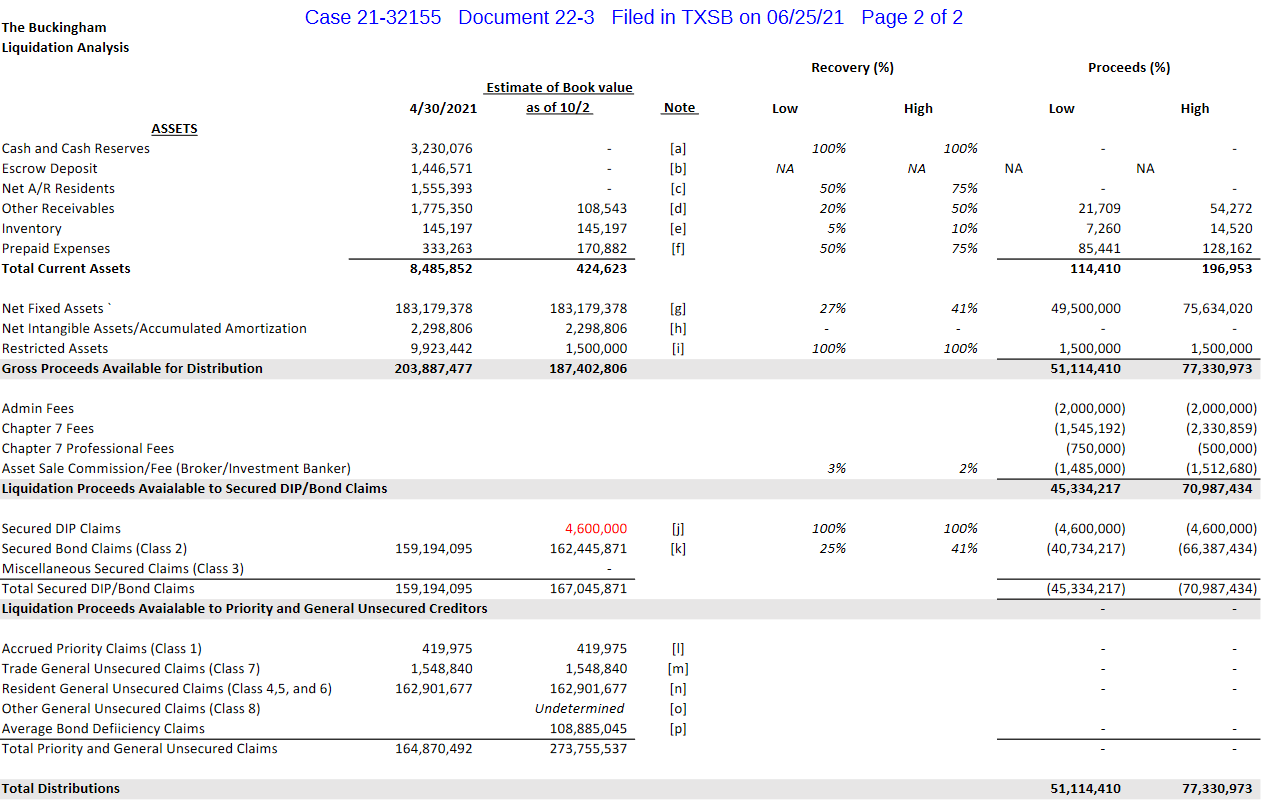