* In January 2007, Eastman Kodak Company announced the sale of its healthcare group (ie, Kodak Health Group ) to Toronto-based Onex Healthcare Holdings Inc. in a deal then valued between $2.35bn and $2.55bn, with the group renamed "Carestream Health, Inc." by Onex the following month.

Additional engagements include Akin Gump Strauss Hauer & Feld LLP and GLC Advisors & Co., LCC which are serving as legal counsel and financial advisor, respectively, to a group of the Company’s first lien and second lien lenders.

In a press release announcing the filing, Carestream advised that: “it is taking the planned next step to implement the previously announced recapitalization process with its lenders by voluntarily filing for reorganization under Chapter 11 of the United States Bankruptcy Code in the United States Bankruptcy Court for the District of Delaware. The Company’s lenders have overwhelmingly voted in favor of a 'prepackaged' restructuring plan, which contemplates implementing the agreed recapitalization that has been filed with the Court. The recapitalization contemplated by the prepackaged plan will eliminate approximately $470 million of debt, representing a total debt reduction of $250 million more than the Company’s previously announced recapitalization agreement. This process will significantly strengthen Carestream’s balance sheet and position the Company for continued success.

With the overwhelming support of its lenders, the Company expects to move through this process on an expedited basis and complete the recapitalization in approximately 35-45 days. Carestream entities outside the United States are not part of the Chapter 11 process and are operating as normal."

The Debtors’ Chairman, President and CEO David C. Westgate commented further: “We are commencing the final stage of our recapitalization process, which will significantly enhance our ability to navigate a dynamic market. Since announcing our recapitalization process in April, our lenders have remained overwhelmingly supportive, and we have worked constructively with them to complete the transaction. As our talks evolved, we determined the best course of action was to implement the agreement through an expedited court-supervised process. With a clear path to completion, we expect to emerge from this process as a stronger partner to our customers, with significantly reduced debt and new owners who also continue to believe in the future of Carestream.”

The key terms of the Restructuring Transactions, as reflected in the Plan, include the following:

On August 23, 2022, the Debtors' claims agent notified the Court of the Plan voting results [Docket No. 42] which were as follows.

The Disclosure Statement [Docket No. 15] attaches the following exhibits:

The Debtors press release provides: "Certain of the Company’s existing lenders have committed to provide a $80 million debtor-in-possession financing facility to reinforce the Company’s liquidity and fund the costs of the process."

While the Company has maintained consistent sales volume for medical film products in developing markets, it has seen a shift in demand to digital-only products in developed markets. In the last ten years, Company sales to developed market buyers as a portion of all digital print product sales have fallen from approximately 24% to just 4%. These market changes have had a significant impact on the Company’s earnings, as medical digital products generate lower EBITDA than medical film.

In emerging markets, the Company has faced downward pricing pressures due to competitive pressures as well as government efforts to reduce the cost of healthcare… While the Company has focused on decreasing costs to maintain a competitive margin in digital print film, it has seen revenue declines of approximately $100 million since 2018.

These trends across the medical film industry were further exacerbated by COVID-19 restrictions, which impacted volumes due to delayed routine medical exams and closed dental operations. The resulting fallout of COVID-19 is still affecting the Company’s business today. Periodic lockdowns, staffing shortages, the increased prevalence of virtual medical appointments, further delay of certain medical tests and procedures and the continued shift toward digital-only products continues to exert downward pressure on the Company’s film sales volume.

The Company, like many other businesses today, has also faced substantial disruption across its global supply chain, increasing input costs for product components and delaying delivery of products and testing modules to customers and distributors. Finally, global inflationary pressures have created further challenges for maintaining product margins.

As part of the amendment negotiations, the Company committed to achieving significant annual cost savings, among other things. Following execution of the amendments under the debt facilities, the Company continued to explore various liquidity enhancing opportunities by investing in select growth initiatives to mitigate certain business headwinds and by adapting its product offerings to comport with recent product demand.

In September 2020, the Company retained Houlihan Lokey Capital, Inc. ('Houlihan Lokey') to advise the Company on strategic transaction alternatives with respect to a potential sale process (the 'Sale Process'), as contemplated by the amended Second Lien Credit Agreement. In February 2021, Houlihan Lokey began marketing the Company, contacting more than 145 financial and strategic buyers, 57 of which executed non-disclosure agreements and received initial diligence materials.

In April 2021, four parties submitted initial indications of interest and three were subsequently invited to complete further diligence, including meeting with members of the Company’s management team. Following completion of additional diligence by these parties, each of these parties indicated that their bid valuation would be less than the principal amount of the Company’s funded debt. Upon receiving this feedback, Houlihan Lokey approached several additional potential buyers and re-approached parties included in the initial outreach.

Ultimately, all of the bids received by the Company in the Sale Process were at pricing levels below the principal amount of the Company’s funded debt. Accordingly, the Company proactively sought to explore alternate, comprehensive restructuring solutions.

Specifically, under the Initial RSA, the Company agreed to pay all then outstanding first lien claims in full from the proceeds of a new first lien term loan facility (the 'Anticipated New 1L Facility') and the holders of second lien term loan claims agreed to exchange their claims for their pro rata share of (a) a new subordinated secured debt facility and (b) 100% of the equity interests in the reorganized Company, subject to dilution. Certain members of the Crossover Group committed to backstopping the Anticipated New 1L Facility subject to the Company achieving satisfactory corporate and debt ratings.

iii. Initial RSA Financing Process To market the Anticipated New 1L Facility, the Company retained JPMorgan Chase Bank, N.A. ('JPM') in June 2022. While JPM was marketing the financing, the U.S. credit markets shifted dramatically and demand for participation in similar refinancings was substantially diminished. Preliminary feedback from market participants indicated that market terms would be less favorable than the backstopped terms provided by certain members of the Crossover Group. Accordingly, the Company sought to enforce the Crossover Group’s backstop commitment under the Initial RSA.

In July 2022, the Company received a determination that the resulting facility would not achieve the necessary rating required by the Initial RSA. Accordingly, the Company was unable to satisfy the conditions to exercise the backstop rights under the Initial RSA. As a result of the foregoing, the Company faced a funding shortfall of approximately $142 million for the refinancing. The remaining Backstop Parties were unable to fund the deficiency and instead the Company and its stakeholders entered into further negotiations regarding a potential consensual path forward. Following extensive, good faith negotiations, the parties mutually agreed to implement a new consensual transaction that would account for the Company’s financing needs.

iv. Entry into the Restructuring Support Agreement The Company and the Crossover Group commenced negotiations regarding the optimal path forward for the Company. After extensive, arm’s-length negotiations, on August 21, 2022, the Debtors and the parties to the Initial RSA terminated the Initial RSA and the Debtors and certain of their lenders, including the Crossover Group, entered into the new Restructuring Support Agreement with the Sponsor.

The Rosa Declaration continues, "Under the Restructuring Support Agreement, the Debtors agreed to certain milestones to ensure an orderly and timely implementation of the Restructuring Transactions. The Debtors have requested through the Scheduling Motion that the Combined Hearing be held on September 28, 2022 (or as soon thereafter as the Court’s schedule allows), and the Debtors intend to emerge from chapter 11 as soon as practicable after the Combined Hearing." 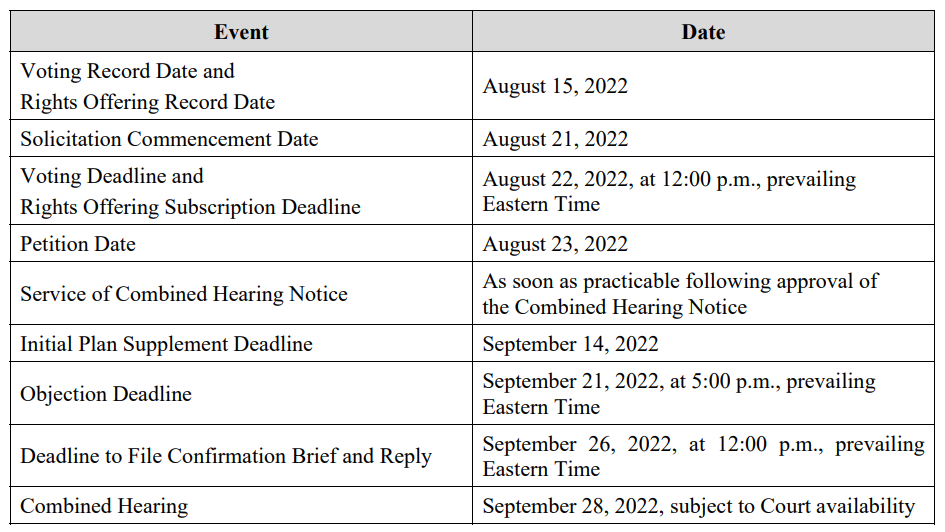 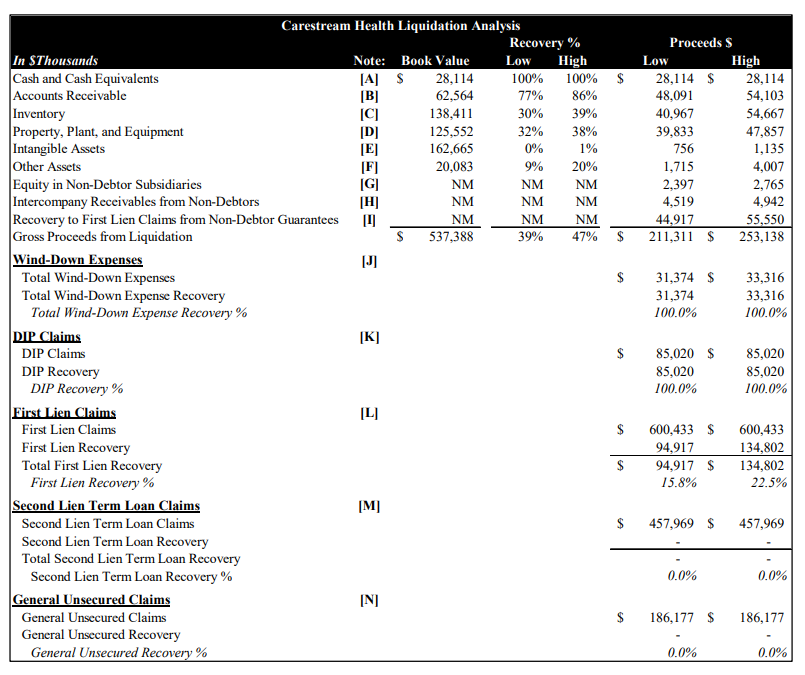 According to the Debtors: “Carestream is a worldwide provider of medical imaging systems; X-ray imaging systems for non-destructive testing; and precision contract coating services for a wide range of industrial, medical, electronic and other applications—all backed by a global service and support network."

The Rosa Declaration adds: "Originally formed as Kodak’s Health Group, Carestream is a leading global provider of innovative medical imaging and non-destructive testing products with over 100 years of industry experience. In 2007, the Company was acquired by Onex. Carestream is a partner of choice to approximately 8,000 direct customers and 900 dealers that distribute its products to more than 50,000 end users in more than 130 countries. Carestream’s products are used by major health systems, hospitals, imaging centers, specialty practices, and industrial companies worldwide.

Headquartered in Rochester, New York, Carestream, through its global workforce of approximately 3,410 employees, offers best in class products and materials to its customers."