June 18, 2021 – Carla’s Pasta, Inc. (“CPI”) and Suri Realty, LLC (“Suri” and with CPI, the “Debtors”), together with the People’s United Bank, National Association, and BMO Harris Bank NA. (together, the “Lenders”) and the Debtors' Official Committee of Unsecured Creditors of Carla’s Pasta, Inc. (the “Committee”; and together with the Debtors and the Lenders, the “Plan Sponsors”) filed a materially amended Plan of Liquidation and a related Disclosure Statement [Docket Nos. 801 and 802, respectively]; and separately filed redlines of each showing changes to the Debtors’ original version filed on May 29, 2021 [Docket No. 803].

[Update: On June 22nd, the Court issued an order approving (i) the Debtors' Disclosure Statement (ii) proposed Plan solicitation and voting procedures and (iii) a proposed timetable culminating in a July 28, 2021 Plan confirmation hearing [Docket No. 835].]

These hastily-filed, all-change Plan documents reflect a suddenly dynamic period for the Debtors' cases and occur after the Debtors withdrew a previously filed settlement with the Dennis Group and their sudden decision to jettison the support of the Dennis Group in favor of that of the Lenders and the Committee.

Polled by the Court at a June 16th hearing as to whether they were supportive of the Debtors' change in strategy, each of the Lenders and the Committee were equivocal beyond clearly favoring the decision to jettison the Dennis Group and the Dennis Group settlement agreement. Both parties continued to support earlier motions to end the Debtors' Plan exclusivity so that their own competing Plans might be filed; a stance which makes this current joint effort something of a surprise.

At the hearing, the Debtors and the other now Plan Sponsors had noted significant advancements in their discussions, but nothing that suggested that they had this Plan ready in their back pocket. Indeed, the typo-ridden documents suggest some late night drafting on the 16th and 17th of June. Many of those typos appear in language supplied by the Committee, and which the Debtors add verbatim (perhaps too verbatim), that makes abundantly clear the continuing hostile attitude they hold in respect of the Dennis Group. For its part, the Dennis Group has filed a conversion motion and remains locked in an adversarial proceeding with the Lenders. The Debtors may have a Plan and Plan Sponsors; but the face-off over the claims of the Dennis Group (which put the Debtors in Chapter 11 in the first place) is far from resolved.

The Plan, filed roughly two months after the completion of the Debtors' asset sale (see below), divides the claims asserted against the CPI and the Suri Debtors; with holders of General Unsecured Claims against both Debtors to share a $450k pool and any assets remaining after secured lenders are paid. As noted below, the Debtors owe the Lenders $21.6mn and anticipate $23.8mn of distributable proceeds before further fees/costs and without accounting for any distribution to (or settlement with) the Dennis Group. The Dennis Group has a $15.4mn claim (in respect of which they believe they have a mechanic's lien) against Suri which would if treated as a secured claim clearly cut into the Lenders' recovery; and, even if allowed as an unsecured claim, significantly dilute recovery for general unsecured creditors.

The Amended Disclosure Statement [Docket No. 802] notes, “The Plan contemplates: (i) an orderly liquidation of assets via a Liquidating Custodian with powers set forth in the Plan and (ii) a distribution to unsecured creditors of CPI from, at least, the Unsecured Creditors’ Fund.

Under the Plan, Claims against and Equity Interests in the Debtors are divided into four (4) Classes in the Carla’s Pasta Chapter 11 Case, and five (5) Classes in the Suri Chapter 11 Case, as summarized in the table below setting forth the classification and treatment of the prepetition Claims and Equity Interests under the Plan and the estimated recovery of Allowed Claims and Equity Interests. Certain unclassified Claims will be paid in full in Cash to the extent they become Allowed Claims. Other Secured Claims (Classes 2 and 2A) and Priority Claims will also be paid in full to the extent they become Allowed.

The Debtors are jointly and severally obligated to the Lenders that hold Claims in the total principal amount of $37,741,927, which Claims are secured by substantially all of the Debtors’ assets pursuant to the Collateral Documents. While the value of the Lenders’ secured Claims are referenced with respect to the value attributable to the assets sold by each Debtor pursuant to the Sale, (which allocation has not yet been determined and all rights of third parties are preserved to challenge same), the Deficiency Claims set forth in Classes 3 and 4A is the aggregate deficiency in both Estates.

The Debtors estimate that, as of the Effective Date, the Debtors will hold assets with a recoverable value of approximately $23,845,197FN.”

FN: To the extent the Court permits the Interim Distribution [a payment to the Lenders], this payment of $15 million would reduce the Debtors’ cash on hand and other assets anticipated to be recovered to approximately $8.8 million on the Effective Date.

The above FN is somewhat indicative of this rushed Plan which now notes that the Interim Distribution was in fact authorized on June 15th "subject to the Lenders posting a surety bond as substitute for the Dennis Group’s asserted mechanic’s Lien" and that estimated cash on hand at effectiveness would be $7.1mn.

The following is an amended and updated summary of classes, claims, voting rights and expected recoveries showing changes in bold (defined terms are as defined in the Plan and/or Disclosure Statement, see also the Liquidation Analysis below):

On April 20, 2021, further to a 21-round, section 363 auction concluded on April 15th and an April 19th sale hearing, the Debtors filed an amended $27.5mn asset purchase agreement (the “APA”), executed with CP Foods LLC and NFP Real Estate LLC (assignees and affiliates of stalking horse Tribe 9 Foods (“Tribe 9” or the "Stalking Horse").

On March 19th, Tribe 9 was designated as stalking horse [Docket No. 313] and on March 29th the Debtors filed a first (and now replaced) asset purchase agreement [Docket No. 336].

On February 8, 2021, Carla’s Pasta, Inc. and one affiliated Debtor (“Carla’s Pasta” or the “Debtors”) filed for Chapter 11 protection with the U.S. Bankruptcy Court in the District of Connecticut lead case number 21-20111. An involuntary Chapter 7 case was filed against Carla’s Pasta affiliate Suri Realty, LLC on October 29, 2020, and subsequently converted to a voluntary Chapter 11 case on December 17, 2020. The Suri case will be jointly administered as part of the Carla’s Pasta case. Carla’s Pasta is a South Windsor Connecticut, company that manufactures high-quality food products and owns 100% of Suri’s membership interests. The Debtors’ lead petition noted between 200 and 999 creditors; estimated assets between $10.0mn and $50.0mn; and estimated liabilities between $50.0mn and $100.0mn.

The Chapter 11 filing brings together two cases, one filed by Carla’s Pasta on February 8th amid plans to sell substantially all of the Debtors’ assets in light of liquidity issues arising largely from the effects of COVID-19 pandemic restrictions, collection actions and a state court lawsuit filed by Dennis Group, and the other that continues the journey of Suri, for which Carla’s Pasta founder Carla Squatrito is the sole manager, from an involuntary Chapter 7 petition, to a conversion to a voluntary Chapter 11 case to, ultimately, joint administration as part of the Carla’s Pasta case.

Liquidation Analysis (see Exhibit B of Disclosure Statement [Docket No. 802] for notes) 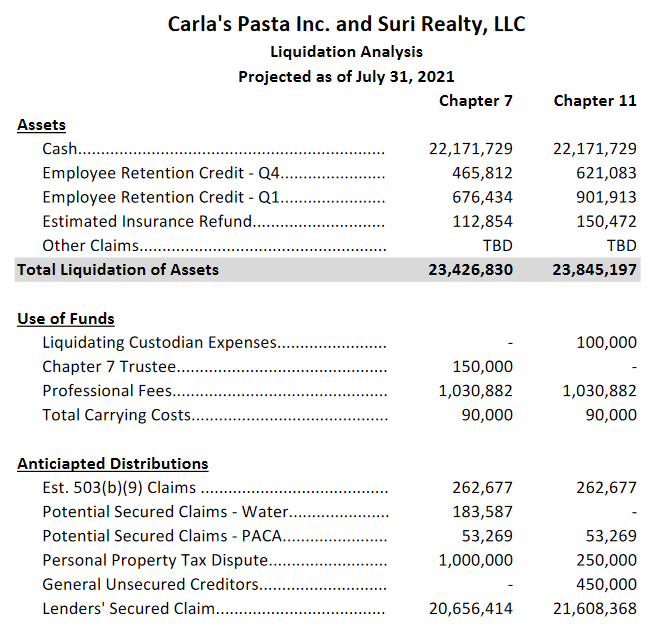 According to the Debtors: “Carla’s Pasta was founded in 1978 by Carla Squatrito and is a family-owned and operated business and is headquartered in South Windsor, Connecticut. Carla’s Pasta manufactures high-quality food products including pasta sheets, tortellini, ravioli and steam bag meals for branded and private label retail, foodservice distributors, and restaurants.”

“Suri’s business is limited to the ownership of two adjoining parcels of real property with an address of 50 Talbot Lane, South Windsor, Connecticut and 280 Nutmeg Road, South Windsor, Connecticut…Suri is the wholly owned subsidiary of Carla’s Pasta. The Facility was built in 2002 and underwent additional expansions in 2005, 2013 and 2018. The 152,613 square foot facility currently features a streamlined production process, sectioned into separate rooms resulting in a controlled environment to optimize food quality and safety. In addition the Facility is divided into two distinct sections with individual systems separated by a fireproof wall, effectively creating two separate facilities.”