As at filing, the Debtors were 98% owned by an affiliate of Apollo Global Management, LLC. In July 2019, the Debtors abruptly called off a planned business combination agreement with blank check company Leo Holdings, Corp (Lion Capital affiliate) which was to be followed by an IPO which had valued the Debtors' equity at $1.4bn.

In a press release announcing the emergence, the Debtors stated: “CEC emerges with a significantly strengthened financial position, approximately $705 million of debt obligations eliminated from its balance sheet and the full support of its new Board of Directors and ownership…As a result of the contributions and support of key constituents, the Company's balance sheet has been strengthened by the reduction of approximately $705 million of debt obligations and at emergence the Company has over $100 million of liquidity to support operations and growth initiatives."

The Debtors further noted in the press release, "CEC has emerged with a new Board of Directors that will consist of seven members, including:

A deadlines of January 29, 2021 has been set for administrative claims.

The Debtors memorandum of law in support of Plan confirmation provided the following late-hour summation: "As a result of the contributions and support of the Debtors’ key constituents, the Plan will strengthen the Debtors’ balance sheet by reducing their funded debt obligations by approximately $489 million and increasing their cash flow on a go-forward basis. Additionally, the Restructuring Transactions will provide the Reorganized Debtors with access to a new $200 million first lien first out term loan facility to fund ongoing working capital and other general corporate purposes. Moreover, pursuant to the Plan, the Debtors will establish and fund a trust to administer, process, settle, resolve, liquidate, satisfy, and pay General Unsecured Claims (the ‘GUC Trust’) and will issue the New Warrants to holders of Senior Unsecured Notes Claims. The establishment and funding of the GUC Trust and the issuance of the New Warrants will provide unsecured creditors with distributions that they, absent the agreement of the Initial Consenting Creditors, would not otherwise be entitled to receive.

The Plan provides for a comprehensive restructuring of the Company’s balance sheet and a significant investment of capital in the Debtors’ business. Specifically, the proposed restructuring contemplates, among other things:

FN: As of the Bar Date, approximately $141.0mn of General Unsecured Claims (excluding over $222.0mn of Senior Unsecured Notes Claims) have been filed and scheduled against the Debtors’ estates. The projected recoveries for Holders of Class 5 General Unsecured Claims are the Debtors’ preliminary estimates as of the date hereof and are subject to material change, including as the result of additional rejection damages claims that may be asserted against the Debtors’ estates. Neither the Creditors’ Committee nor the GUC Trustee has independently verified the Debtors’ assumptions and makes no representation or warranty with respect to the proposed recoveries set forth herein. Actual recoveries may materially differ (either higher or lower) from this estimated range based on, among other thing: (i) the Debtors’ final determinations whether to assume or reject executory contracts and unexpired leases (which have not been finalized as of the date hereof); (ii) the reduction of Allowed amounts of claims based on claims objections and the claims reconciliation process; (iii) the amount of GUC Trustee expenses; (iv) the potential allowance of contingent and/or unliquidated litigation and other claims; (v) the potential coverage of certain claims by insurance or other third-party sources; (vi) the potential allowance of late-filed claims (including any claims that may not have been filed as of the date hereof); and (vii) the potential impact of U.S. Trustee fees on the GUC Trust. Analysis of asserted claims and discussions with holders of claims remain ongoing.

On December 11, 2020, the Debtors' claims agent notified the Court of the Plan voting results [Docket No.1471] which were as follows:

On October 13, 2020, the Court hearing the Debtors' cases issued an order authorizing the Debtors’ to (i) access $200.0mn of debtor-in-possession (“DIP”) financing and (ii) use cash collateral [Docket No. 1118]. $100.0mn of the DIP financing, being provided by prepetition lenders, was made available immediately by that DIP Order (the “Closing Date”); with remaining amounts made available as delayed draw term loans as needed (in up to four draws after the Closing Date, with each such draw not exceeding $50.0mn). The DIP Facility also requires, among other things, a 5% Put Option Premium and annual interest of LIBOR plus 1000 basis points (subject to a LIBOR floor of 100 basis points).

The Debtors filed Plan Supplements at Docket No. 1337, 1459 and 1486 which attached the following documents: 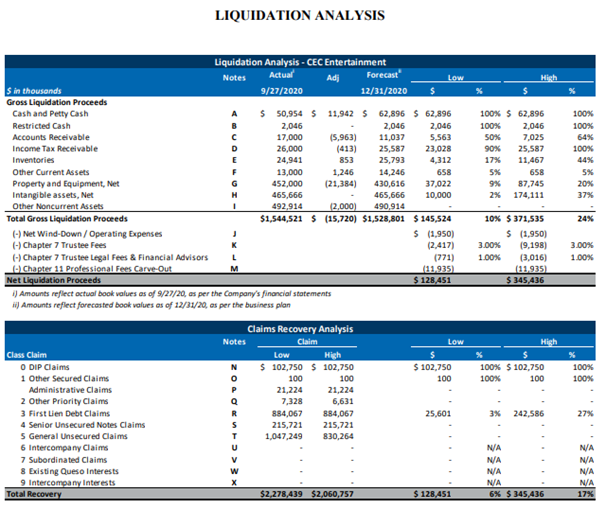 According to the Debtors: "CEC Entertainment, Inc. is a nationally recognized leader in family dining and entertainment with both its Chuck E. Cheese and Peter Piper Pizza restaurants. As the place where over half a million happy birthdays are celebrated every year, Chuck E. Cheese's goal is to create positive, lifelong memories for families through fun, food, and play and is the place Where A Kid Can Be A Kid®. Committed to providing a fun, safe environment, Chuck E. Cheese helps protect families through industry-leading programs such as Kid Check®. As a strong advocate for its local communities, Chuck E. Cheese has donated more than $16 million to schools through its fundraising programs and supports its national charity partner, Boys and Girls Clubs of America. Peter Piper Pizza features dining, entertainment and carryout with a neighborhood pizzeria feel and "pizza made fresh, families made happy" culture. Peter Piper Pizza takes pride in delivering quality food and fun that reconnects family and friends. With a bold design and contemporary layout, an open kitchen revealing much of their handcrafted food preparation, the latest technology and games, and beer and wine for adults, Peter Piper Pizza restaurants appeal to parents and kids alike. As of March 29, 2020, the Company and its franchisees operated a system of 612 Chuck E. Cheese and 122 Peter Piper Pizza venues, with locations in 47 states and 16 foreign countries and territories."