As reported previously, in June, Celsius informed users that it was freezing all withdrawals, swaps and transfers between accounts because of “extreme market volatility.” The Company handled around $11.8 billion in assets as of May 17 and has 1.7 million users.

In a press release announcing the filing, Celsius advised that "it initiated voluntary Chapter 11 proceedings to provide the Company with the opportunity to stabilize its business and consummate a comprehensive restructuring transaction that maximizes value for all stakeholders…Celsius has $167 million in cash on hand, which will provide ample liquidity to support certain operations during the restructuring process….Celsius is not requesting authority to allow customer withdrawals at this time. Customer claims will be addressed through the Chapter 11 process."

Members of the Special Committee of the Board of Directors commented: “Today’s filing follows the difficult but necessary decision by Celsius last month to pause withdrawals, swaps and transfers on its platform to stabilize its business and protect its customers. Without a pause, the acceleration of withdrawals would have allowed certain customers — those who were first to act — to be paid in full while leaving others behind to wait for Celsius to harvest value from illiquid or longer-term asset deployment activities before they receive a recovery.”

Alex Mashinsky, the Debtors' Co-Founder and chief executive officer, commented further: “This is the right decision for our community and company. We have a strong and experienced team in place to lead Celsius through this process. I am confident that when we look back at the history of Celsius, we will see this as a defining moment, where acting with resolve and confidence served the community and strengthened the future of the company.”

The Debtors have also released a "Community Update" and YouTube video which, although perfectly valid forms of communication, reflect simplistic and optimistic messaging pretty clearly intended to calm the crypto investing community and mitigate selling efforts which drive what Chapter 11 crypto filer Voyager referred to in its own bankruptcy filings as a "death spiral." For a general sense of the messaging, the video informs Celsius's "investor community," (yes, these guys) 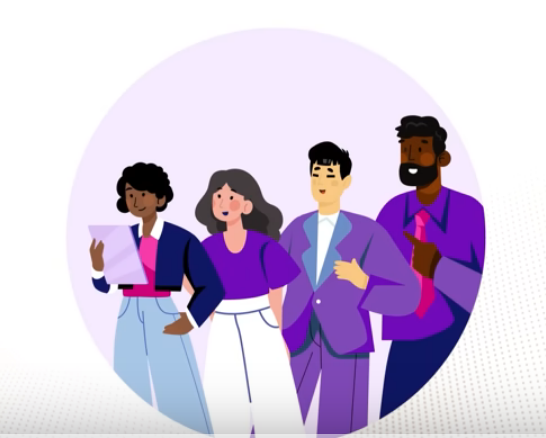 that "the Plan of Reorganization will be negotiated between Celsius and, among others, a committee of unsecured creditors including YOU [emphasis in original], our customers" listing companies that have "successfully reorganized under Chapter 11 and emerged stronger than before."

Unlikely a coincidence that these communications are put out before the hard boiled facts as to why the Debtors are seeking bankruptcy protection get filed with the Court. As is increasingly common in first day filings, the declaration in support of those filings (supposedly filed contemporaneously and incorporated by reference, including in respect of defined terms) which contains an obligatory "Events Leading to the Chapter 11 Filings…" was not filed on the Petition Date, but rather at approximately 2 p.m. the following day [Docket No. 23, the "Mashinsky Declaration"]. The delay, often now stretching through an entire business day, effectively renders each of the first day motions incorporated in the declaration…incomplete. When are Courts going to call filers out on this practice? While awaiting the "Mashinsky Declaration," about 10 first day motions were filed.

According to the Mashinsky Declaration (defined below), "These chapter 11 cases will provide a 'breathing spell' for the Debtors to negotiate and implement a plan that will maximize the value of its business and generate meaningful recoveries to our stakeholders as quickly as possible….

The Debtors are aiming to file a plan that will provide users with choices and enable Celsius to return to normal operations. To fund plan recoveries, the Company may sell one or more of its assets and/or consider an investment from third-party strategic or financial investors in exchange for equity in a 'reorganized' Celsius."

The Mashinsky Declaration continues, "In 2021, the Company acquired GK8, which is designed to provide a secure institutional digital assets self-custody technology platform to institutional clients… The Company intended to use the acquisition of GK8 to enhance the Company’s ability to provide consumers with custody services by April 2022.

While Celsius has not been able to integrate GK8’s operations post-acquisition given Celsius’ focus on its own liquidity position, GK8 is a valuable asset in light of an industrywide migration to self-custody post the 'cryptopocalyse.' The Company is exploring both a marketing and sale process of the GK8 business and a complete integration and utilization of the GK8 business into Celsius’ own platform."

In a declaration in support of the Chapter 11 filing (the “Mashinsky Declaration”), Alex Mashinsky, the Debtors’ chief executive officer, detailed the events leading to Celsius’s Chapter 11 filing. The Mashinsky Declaration provides: “Celsius’ early success was not without its hiccups. The amount of digital assets on the Company’s platform grew faster than the Company was prepared to deploy. As a result, the Company made what, in hindsight, proved to be certain poor asset deployment decisions [Mashinsky provides no insight into these decisions]. Some of these deployment activities took time to unwind, and left the Company with disproportional liabilities when measured against the unprecedented market declines.

The Company also suffered other unanticipated losses. In 2021 and 2022, the Company had started making significant changes to its business model to address these losses, including reducing rewards rates and introduction of user fees. In the midst of the Company’s efforts to right-size those liabilities, unanticipated global events put a strain on the Company’s activities. Among other factors, the lingering effects of the COVID-19 pandemic, coupled with rampant inflation and the adverse effects of the war in the Ukraine on the world economy, contributed to a massive sell-off in traditional assets in 2022.

The crypto market is not immune to these macroeconomic trends, as it also experienced extreme market volatility in 2022, particularly in the last three months. Several negative events in the crypto space, including the implosion of Terra LUNA ('Luna') and its TerraUSD (UST) stablecoin ('UST'), accelerated the onset of a 'crypto winter' and an industry-wide sell-off in 2022.

The onset of the 'crypto winter' combined with the well-publicized collapse of Luna and the failure of several crypto funds/exchanges led to growing industry-wide reluctance to do business with companies, such as Celsius, that held crypto assets. This reluctance was exacerbated by a series of negative media and social media comments about Celsius, a number of which were unsupported and misleading. As a result of all of these factors, users began withdrawing crypto from Celsius’ platform in large amounts and at a rapid pace.

Because of the variety of asset deployment strategies the Company engaged in, including the terms and length of time those strategies 'lock' the assets, and due to the drop in value of digital assets, Celsius was unable to both meet user withdrawals and provide additional collateral to support its obligations. This left Celsius to deal with an unexpected and rapid 'run on the bank.' In an effort to stabilize its business and protect its users, on June 12, 2022 (the 'Pause Date'), Celsius decided to pause all withdrawals, swaps, and transfers on its platform (the 'Pause').

Concurrently with this decision, the Company decided to limit its engagement in asset deployment, as further explained herein, to conserve its remaining assets. The Pause was intended to prevent certain users — those who were the first to act — from being paid in full while leaving other users behind to wait for Celsius to harvest value from illiquid or longer-term asset deployment activities before they received a recovery.

In connection with the Pause, Celsius’ management began to explore immediate potential strategic solutions at a much quicker pace than they had considered previously. On or about June 19, 2022, Celsius retained Centerview Partners LLC ('Centerview'), as financial advisor and investment banker, and Alvarez & Marsal North America, LLC ('A&M'), as restructuring advisor to advise on potential transactions. On or about June 28, 2022, Celsius retained Kirkland & Ellis LLP ('Kirkland') as restructuring counsel.

Celsius has engaged and is continuing to engage in discussions with certain third parties regarding potential sources of new liquidity. Discussions with these third parties, however, all suggested that an in-court process would be necessary to yield the most value-maximizing path forward and to allow Celsius to return value to users in a fair and transparent manner. To date, Celsius has closed or unwound nearly all of its outstanding DeFi and other counterparty loans to bring its collateral back under its control."

The Mashinsky Declaration further states, "On July 7, 2022, KeyFi, Inc. ('KeyFi') filed a complaint in the Supreme Court of the State of New York, County of New York against CNL and Celsius KeyFi LLC (the 'KeyFi Complaint') alleging five different causes of action asserting breach of contract, negligent misrepresentation and fraud claims and demanding an accounting. The KeyFi Complaint was filed in response to an ongoing dispute with KeyFi and its chief executive officer and is one example of the way in which others are attempting to generate distrust among the Company’s users and the general public.

The Company strongly disagrees with the allegations raised in the KeyFi Complaint and intends to vigorously defend itself."

The Petition Date press release states that the Debtors' new directors include:

David Barse is the Founder and Chief Executive Officer of XOUT Capital, an index company, and DMB Holdings, a private family office. Mr. Barse was formerly the CEO of Third Avenue Management for 25 years, a pioneer in fundamental, bottom-up deep value and distressed investing.

Alan Carr is an investment professional with over 25 years of experience building businesses, leading complex restructurings and protecting and creating value for stakeholders. Mr. Carr is a Founder and the Managing Member of Drivetrain, LLC, a professional fiduciary services firm. 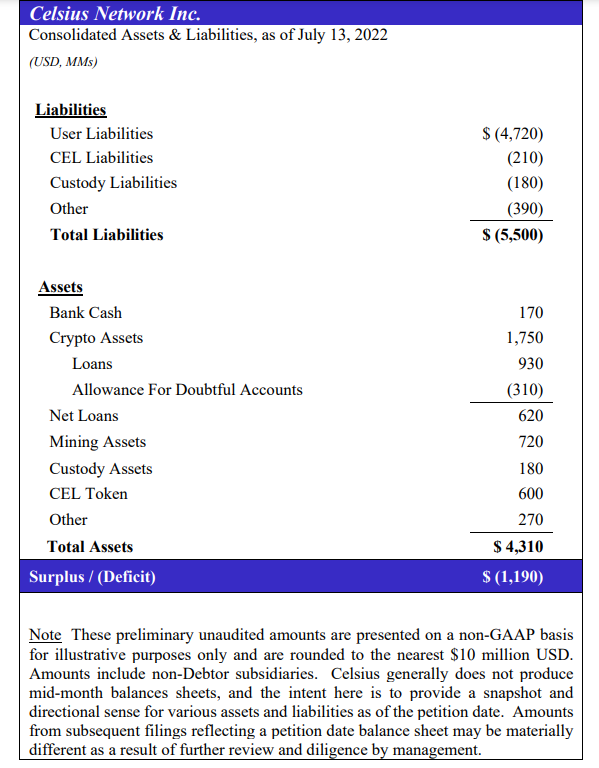 The Debtors do not have any long-term or funded debt. The Debtors use DeFi loans to finance their operations, which are overcollateralized loans supported by the Company’s digital assets and governed by smart contracts. As of the Petition Date, the Company has unwound nearly all of its DeFi loans and the FTX loan, with only one loan remaining in an amount of approximately $3.2 million collateralized by $6.6 million in digital assets.

According to the Debtors: “Built on the belief that financial services should only do what is in the best interest of the customers and community, Celsius is a blockchain-based platform where membership provides access to curated financial services that are not available through traditional financial institutions."