Additionally, the Fourth Amended Plan incorporates references to a Collateral Agreement dated December 19, 2019 between MUFG Union Bank, N.A., as collateral trustee, Chesapeake, and certain of the other Debtors.

A docket entry indicated that Day 6 of the Plan confirmation hearing was underway on December 28th [Docket No. 2638].

The Debtors' memorandum [Docket No. 2354] states, “…the Debtors successfully wielded every bit of leverage at their disposal — including the threat of potential preference litigation — to secure maximum value for their Estates and all parties in interest. This value includes over $4 billion of new money commitments, agreements to reduce total funded indebtedness by approximately $7 billion (including by equitizing approximately $3.8 billion of secured debt) and agreements to gift meaningful recoveries (currently worth over $140 million) to unsecured creditors that are billions of dollars out of the money. Equally important, the Consenting Stakeholders provided the Debtors with a going concern path to exit through a mine field — the value of which cannot be overstated. But for some, these concessions are not enough….

Sticking to its theme, the official committee of unsecured creditors (the ‘Creditors’ Committee’) once again asks this Court to set aside the facts of these cases, market realities and the law and instead review the Plan in light of alternative plan structures that do not exist, novel valuation methodologies unsupported by the market and a set of ‘facts’ that is at odds with uncontroverted testimony and overwhelming evidence to the contrary. The Court should once again decline to engage with this counter-factual narrative.”

As previously reported, as urged by the Creditors’ Committee, Class 7 voted overwhelmingly to reject the Debtors' Plan. The persistent and vocal objections of the Creditors' Committee (they filed another objection on December 11th [Docket No. 2282], albeit largely a rehash of existing arguments and filed before the Third Amended Plan) would seemingly indicate that a further $9.0mn (still leaving general unsecureds with a less than 1% recovery) would not be enough to get that committee to withdraw its objections.

Those objections fall into two groups (reviewed in greater detail below): issues as to valuation and as to possibly valuable claims (relating, inter alia, to fraudulent transfers and avoidance of preferences). The Creditors' Committee argues that the Debtors' valuation efforts have been deeply flawed, with "a patchwork of excessively conservative assumptions" undervaluing the Debtors' assets by almost $3.0bn, value taken in part from unsecured creditors and dropped in total into the pockets of the prepetition lenders. This valuation gap has only become worse with the recovery of oil and gas prices. The Creditors' Committee also argues that the Debtors have failed to pursue "numerous viable and valuable claims," no failure more egregious than the "squandering of $3.8 billion in non-insider preference claims just before the bankruptcy filings." The enormous sums and apparently still significant gap between the parties may explain why the Debtors have not yet felt comfortable filing a proposed Plan confirmation order at this late stage.

On October 26, 2020, the Official Committee of Unsecured Creditors (the “Committee”) objected to the Debtors’ First Amended Disclosure Statement [Docket No. 1550] alleging “glaring deficiencies” that render the “Disclosure Statement…both facially and substantively deficient with respect to critical Plan-related issues” and leaves unsecured creditors without any hope of arriving at an informed decision as to their Plan vote.

In a scathing attack, the Committee used its objection to the Disclosure Statement as a vehicle to share more “pertinent facts lying just below the surface,” facts that relate to months of pre-filing maneuvers designed to protect the Debtors, the Debtors’ management, the Debtors’ FLLO lenders and the Debtors’ second-lien noteholders (with unsecured noteholder-turned second-lien creditor Franklin Resources Inc. playing a particularly villainous role, NB: Franklin also holding 12.4% of the Debtors’ equity at the end of 2019)…all at the expense of unsecured creditors. “There is perhaps no better time,” the Committee suggests “for the reveal than in connection with a woefully deficient Disclosure Statement.”

The Committee argued in its version of events (or “reveal”), which it also intends to use as a basis for requesting derivative standing (the “standing motion”) to prosecute estate claims and causes of action) that the Debtors entered into a series of transactions that allowed $1.5bn of supposedly siloed debt assumed during the acquisition of its “Wildhorse (BVL)” assets in February 2019 to escape that silo and “infect” unwitting creditors in other parts of the Debtors’ capital structure. That “infection” occurred as a result of two “liability-management” transactions: (i) the refinancing of the $1.5bn Wildhorse (BVL) funded debt at which point the $3.8bn FLLO loan was created and which extended guarantees beyond the siloed Wildhorse (BVL) debt and (ii) a simultaneous exchange of “selected” unsecured bond debt (i.e., not offered to all similarly situated bondholders) for second lien debt, “up-tiering” that bond debt in the capital structure. The Committee argued that “of those select few, none was more preferred and enriched as Franklin.”

Those two transactions, however, the Committee further argued, simply set the stage for the final and most damaging maneuver by Debtors long aware that they were sliding into an inevitable bankruptcy. In connection with the FLLO financing, the Debtors were required to submit mortgages to be recorded/perfected; with any Chapter 11 filing occurring within 90 days of delivery of those mortgages subjecting them to a “direct preference attack” under bankruptcy law The Committee accuses the Debtors of dragging their heels long enough to take those transactions beyond the 90-day time frame, thereby “squander[ing] $3.8 billion in preference claims against the FLLO lenders and Second Lien Noteholders.”

The Committee noted that the complaint advancing its proposed “standing motion “against the Debtors et. al. runs to over 100 pages, but grouped their claims into three categories otherwise touched on above:

The objection noted, “The Debtors came to bankruptcy with a particular case theory and strategy. Claims arising under the Debtors’ ‘FLLO’ term loan are, say the Debtors, the ‘fulcrum’ debt. The Second Lien Notes and unsecured claims are, in turn, ‘out-of-the-money.’ There is, according to the Debtors, no reasonable factual or legal basis to challenge the pre-petition capital structure. Thus, the FLLO lenders are due the entirety of the Chapter 11 estates. Nevertheless, the Plan delivers to the FLLO lenders only the lion’s-share of distributable value; magnanimously, it also delivers 12% equity to each of the Second Lien and unsecured creditor classes. But, what is bequeathed is immediately taken away: Through a separate rights-offering, the FLLO lenders and certain select holders of Second Lien Notes (primarily Franklin) redistribute to themselves just about all of the allocation reserved for the other Second Lien Noteholders and all unsecured creditors. And, of course, these parties deliver to themselves (and all Directors and Officers) full Plan releases.

The problem is this: None of it comports with the underlying facts of the case or, in turn, applicable law. Of more immediate concern: No reader of the proposed Disclosure Statement learns any of the pertinent facts lying just below the surface. It is time for those underlying facts to become known. And, there is perhaps no better time for the reveal than in connection with a woefully deficient Disclosure Statement.

With the filing of this Objection, the Committee has also filed motions seeking derivative standing to prosecute estate claims and causes of action against various parties, including the FLLO lenders and Second Lien Noteholders (the ‘Derivative Standing Motions’)."

The Second Amended Disclosure Statement [Docket No. 1622] added sections and details directed at the Committee’s arguments. The Debtors acknowledged in the Second Amended Disclosure Statement that “The UCC is likely to lodge an objection to confirmation of the Plan if the Debtors are unable to agree on the terms of a consensual restructuring with the UCC." 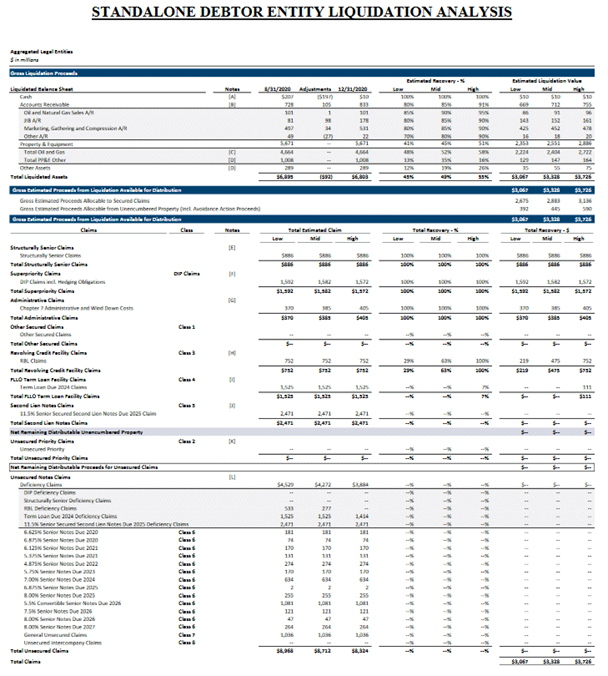 The Debtors are an independent exploration and production company engaged in the acquisition, exploration and development of properties to produce oil, natural gas and NGL from underground reservoirs: “We own a large and geographically diverse portfolio of onshore U.S. unconventional liquids and natural gas assets, including interests in approximately 13,500 oil and natural gas wells. We have significant positions in the liquids-rich resource plays of the Eagle Ford Shale in South Texas, the stacked pay in the Powder River Basin in Wyoming and the Anadarko Basin in northwestern Oklahoma. Our natural gas resource plays are the Marcellus Shale in the northern Appalachian Basin in Pennsylvania and the Haynesville/Bossier Shales in northwestern Louisiana.

In February 2019, we acquired WildHorse Resource Development Corporation, an oil and gas company with operations in the Eagle Ford Shale and Austin Chalk formations in southeast Texas, for approximately 717.4 million shares of our common stock and $381 million in cash, and the assumption of WildHorse’s debt of $1.4 billion as of the acquisition date of February 1, 2019. The acquisition of WildHorse expands our oil growth platform and accelerates our progress toward our strategic and financial goals of enhancing our margins, achieving sustainable free cash flow generation and reducing our net debt to EBITDAX ratio.”

CalPlant I Holdco, LLC – Court Approves an Additional $18.3mn of DIP Financing, Now Expects (Unstarted) Sale Process to Complete by the End of the Year