Overview of the Prepackaged Plan and RSA

The RSA contemplates a comprehensive reorganization to be implemented through a prepackaged chapter 11 plan, that will result in a substantial deleveraging of the Debtors’ balance sheet. Under the RSA, D&G (defined below) will convert its secured debt into 100% of the new equity interests in the reorganized Debtors, and may roll over up to $13 million in a combination of DIP claims and prepetition claims into an exit facility on terms to be mutually agreed upon among the Debtors and D&G Investors, L.L.C. (“D&G”).

On December 15, 2020, the Debtors were notified that D&G had purchased the entirety of the debt outstanding under their prepetition credit agreement.

D&G shares an address and appears to be an entity controlled by Gala Capital Partners ("GSP"), with the RSA signed on behalf of D&G by GCP's founder Anand Gala. GSP, which acquired burger chain Mooyah in 2017, describes itself and Mr. Gala as follows: "Gala Capital Partners, LLC (GCP) is a private investment company started by Mr. Anand Gala.  It is focused on long term investments in franchise brands ranging from 20-200 units and more than $20MM in system wide sales.  Mr. Gala has spent the past 35 years in various aspects of the franchise business, having been involved as an operator, developer, franchisee, investor and member of the Board of Directors of various franchised brands in the restaurant industry."

The Disclosure Statement provides the following:

In January 14, 2021, the Holder of Prepetition Credit Agreement Secured Claims (the “Consenting Lender”) and the Company entered into a Restructuring Support and Forbearance Agreement (together with all exhibits thereto, and as amended, restated, extended, and supplemented from time to time, the “RSA”) that sets forth the principal terms of the Restructuring Transactions and requires the Consenting Lender to support the Plan. Among other things, the Plan and RSA contemplate the following:

The following is a summary of classes, claims, voting rights and expected recoveries (defined terms are as defined in the Plan and/or Disclosure Statement, see also the Liquidation Analysis below)

D&G will provide the Debtors with a DIP facility in the principal amount of $9.0mn, comprised of $3.0mn in new credit and deemed term loan “roll up” of $6.0mn in prepetition debt. The DIP loans under the DIP facility will bear interest at the rate of 15% per annum and will mature on the date that is 75 days after the Petition date. Amongst agreed DIP milestones is a requirement that the Debtors’ Plan go effective within 60 days of the Petition date.

The Debtors' Disclosure Statement details the events leading to the Debtors' Chapter 11 filing, noting evolutions in the "ultra-competitive casual dining sector" that have had an outsized impact on a business that employs an "all-you-can-eat buffet model;" with that business model taking a further blow with the COVID pandemic.

The Debtors have simply not been able to address the shift from in-restaurant dining to take-out and have struggled with the extra costs of trying. We saw a very similar dynamic with 1069 Restaurant Group, LLC (the largest Golden Corral franchisee) which also noted the particular exposure of all-you-can eat formats (inherently dine-in) to changing technologies and consumer preferences. Those Debtors also getting bankruptcy-inducing blows from COVID-19. At Cici's, where in-restaurant dining accounted for approximately 86% of sales, the Debtors simply did not have the tools to transition and compete as the entire restaurant sector was transitioning to delivery/take-out options to mitigate the impact of the pandemic.

The Disclosure Statement provides: "CiCi’s operates in the ultra-competitive casual dining sector, competing with everything from local restaurants to national and multi-state casual and 'fast casual' chains. To remain successful in this competitive landscape, the Company has had to increase spending to compete effectively and maintain its customer base, particularly in light of the expansion of fast casual competitors, the launch of new formats and operators, and the deployment of new technologies to reach and engage customers. This all has led to increased competition for customers, particularly during lunch hours, which had a direct impact on the casual dining sector.

The past decade has also seen incredible growth in food delivery, and this trend poses significant challenges to CiCi’s all-you-can-eat buffet model, which depends on in-store dining for approximately 99% of its revenue. Digital ordering and delivery, including through third party delivery services, has grown 300% faster than dine-in traffic since 2014.

This trend is particularly prevalent among millennials, who are more likely to order takeout or delivery than dine in-store. CiCi’s introduction of digital ordering and delivery services has amplified its ability to reach customers, but the Company’s reliance on third party dispatch and delivery platforms has impacted margins and may reduce customer loyalty over the longer term by lowering switching costs. As such, and because the in-store experience features less prominently today in the overall customer value proposition, CiCi’s must work harder and more creatively to differentiate its offerings from the competition.

In 2019 and early 2020, CiCi’s management team was in the midst of implementing a strategy to make CiCi’s more efficient and flexible so it could remain competitive in a crowded restaurant industry. In 2019, CiCi’s closed three of its owned locations and transferred 29 others to franchisees, leaving CiCi’s with ownership of fewer than 20 locations. In early 2020, CiCi’s was in the process of relinquishing ownership of its remaining owned locations, with plans to close seven restaurants and transfer 10 to franchisees. In conjunction with its efforts to streamline its business model, CiCi’s also designed a 'reshape plan' to improve system-wide economics, and CiCi’s had made plans to shutter one of its three JMC distribution centers to consolidate operations.7 CiCi’s was in the middle of this operational turnaround strategy when the COVID-19 pandemic brought the economy to a halt in March 2020.

The unpredictable and unprecedented scale of the COVID-19 pandemic significantly disrupted CiCi’s restaurant operations and severely limited customer demand. As various federal, state, and local governments instituted shelter-in-place orders and restricted restaurant operations to delivery and takeout services, CiCi’s (like many other restaurants) experienced a significant decline in customer spending and foot traffic. As a result, CiCi’s has needed to adopt an entirely new set of operational requirements (and incur related costs) to protect the health and safety of customers, employees, and supplier partners. Moreover, given that on-premises dining had traditionally accounted for approximately 86% of sales at CiCi’s restaurants, the shutdowns delivered a sudden and significant blow to the business’s liquidity position."

According to the Debtors' Disclosure Statement: "CiCi’s is a privately owned pizza company that was founded in 1985 in Plano, Texas, as an all-you-can-eat pizza destination. CiCi’s brand and core mission are delivering (a) the ultimate all-you-can-eat pizza and gaming experience, (b) a casual, fun, and family-oriented dining environment, and (c) unbeatable value. These goals have helped CiCi’s establish a strong, family-friendly brand in the industry and geographies where it operates. In 1990, CiCi’s founded Debtor JMC Distribution, LP ('JMC') to support its restaurants by providing centralized purchasing and distribution capabilities.

By owning and operating JMC, CiCi’s was able to simplify its restaurant operations, ensure consistent product quality across the system, and facilitate its low cost, all-you-can-eat platform. This business model proved attractive to investors, and CiCi’s has undergone several changes in ownership over the last 20 years.

CiCi’s was first purchased in a management buyout with Levine Leichtman Capital Partners, LLC in 2003, which then sold the company to ONCAP Management Partners in 2007. These firms and their respective investments helped CiCi’s grow to approximately 650 restaurants in 33 states by 2009, most of which were franchised locations. Following this growth stage, CiCi’s franchised unit count declined while the company developed a portfolio of over 40 company-owned stores, mostly through acquisitions of franchised locations. As part of this trend, CiCi’s total footprint fell to approximately 430 stores by 2016. That year, the business was acquired by Arlon Food and Agriculture Partners II LP (together with affiliated funds owning an interest in CiCi’s, 'Arlon').

Starting in 2019, CiCi’s moved away from owning and operating its restaurants, deliberately evolving towards a more efficient, 100% franchise system that streamlines operations. To implement this strategy, CiCi’s focused on capital allocation, strategic refranchising, and closures or transfers of Company-owned restaurants to franchisees.

By the beginning of 2020, CiCi’s was down to 395 restaurant locations across 25 states, 369 of which (96%) were franchise locations [NB: Debtors' site notes 450 restaurants in 32 states]. These franchises are spread among approximately 128 different franchise owners, most of whom are individuals. This model means CiCi’s has relatively few direct employees, most of whom are employed by the JMC business, and none of whom are represented by a collective bargaining unit."

The following documents were attached to the Debtors’ Disclosure Statement: 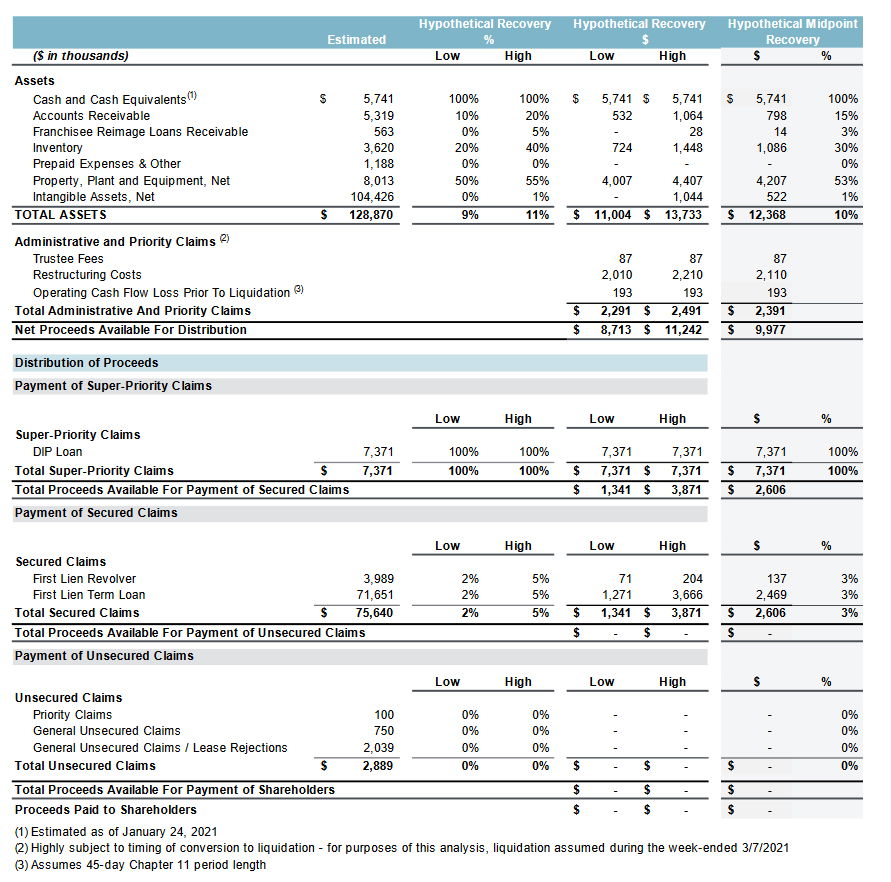 As set forth below, the lead Debtor (or "CiCi’s Parent') owns, directly or indirectly, each of CiCi’s eight Debtor subsidiaries, all of whom are obligors, as either borrowers or guarantors, of CiCi’s prepetition funded debt. CiCi’s  Parent  is  owned  by  a  non-Debtor,  Pizza  Holdings,  LLC, which itself is majority owned and controlled by Arlon.  Specifically, Arlon owns 65.0% of Holdings’ preferred shares and 52.9% of its common shares.  The remaining preferred and common shares are owned by Arlon’s co-investors and current and former management. 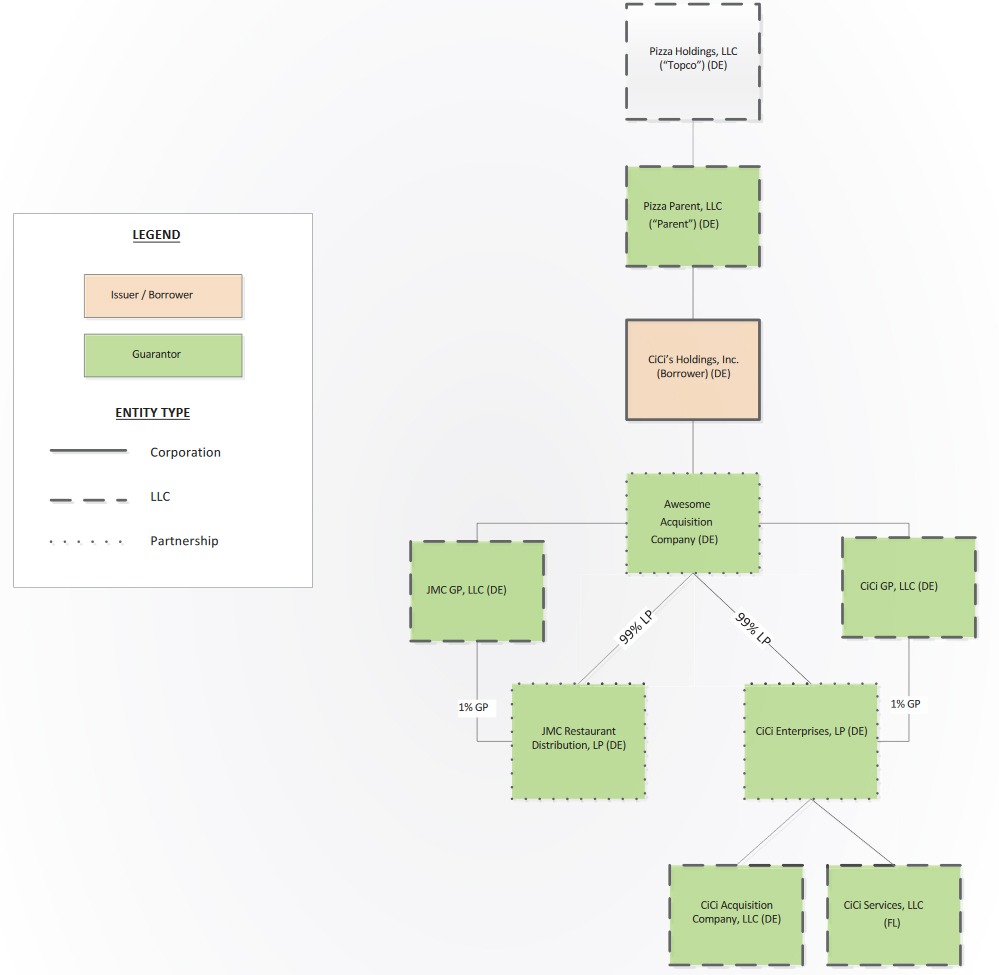