The Memorandum [Docket No. 912] provides the following pre-confirmation hearing assessment: “The Debtors’ reorganization has been marked by consistent progress — and, ultimately, global consensus amongst key stakeholders — nearly every step of the way. Facing the unprecedented COVID-19 pandemic, the Debtors commenced these cases. Immediately thereafter, the Debtors turned their attention to building broad consensus with the rest of their stakeholder base, including the Official Committee of Unsecured Creditors (the ‘Committee‘).

After nearly seven months of hard-fought negotiations with the Committee, landlords, studios, and other creditors, the Debtors have a consensual Plan, supported by the Committee and numerous of the Debtors’ landlords. Under the Plan, the Debtors will emerge as a leaner, well-capitalized company, having consummated a transformative restructuring in less than eight months—no small or easy task for a movie theater business in the midst of a pandemic. The Debtors have also worked diligently and in good faith to resolve all formal and informal objections to confirmation of the Plan (the ‘Objections’ and, such parties, the ‘Objectors’). As of the filing of this Memorandum, all objections except that filed by MN Theaters 2006, LLC at ECF No. 863 (‘MN Theaters’ and the ‘MN Objection‘) have been substantively resolved by consent. As detailed herein, the Bankruptcy Court should overrule the ["remarkable" and "absurd"] MN Objection outright.”

The Third Amended Disclosure Statement [Docket No. 773] notes, “The Plan provides for a reorganization of the Debtors as a going concern, with a reduced number of theaters to focus on profitable locations.

The following is the third amended summary of classes, claims, voting rights and expected recoveries showing highlighted changes (defined terms are as defined in the Plan and/or Disclosure Statement, see also the Liquidation Analysis below):

On November 23, 2020, the Debtors' claims agent notified the Court of the Plan voting results, which were as follows [Docket No. 911]:

The Debtors filed a Plan Supplement [Docket No. 885] which attached the following:

The Third Amended Disclosure Statement reflects the creation of “The GUC Claims Trust," under which the GUC Claims Trustee will distribute to holders of General Unsecured Claims $5.3mn in net assets, less the amount needed to make a 12% distribution to holders of an estimated $1.13mn in Convenience Claims, as well as a Theater Level Cash Flow Note (the "TLCF Note"). According to the Third Amended Disclosure Statement, under the TLCF Note, the Debtors "shall be obligated to pay eight percent (8%) of Theater Level Cash Flow for all Theaters for the period of January 1 through December 31 of each calendar year, distributed on an annual basis for a period of three years following the Effective Date (each such payment, a 'TLCF Payment').

The initial TLCF Payment shall be paid no later than June 30, 2022, and the two subsequent TLCF Payments shall be paid promptly following the completion of the Debtors’ audited financial statements (but in any event no later than five months after each year’s end even if the Debtors’ audited financial statements are not yet complete), which the Debtors anticipate will be completed in May 2023 and May 2024. For the avoidance of doubt, no interest shall accrue or be payable on account of the TLCF Note unless the Reorganized Debtors fail to make a timely TLCF Payment, in which case interest shall accrue at the rate of fifteen percent (15%) per annum with respect to any such TLCF Payment, commencing on (i) July 1, 2022, with respect to the first TLCF Payment, and (ii) June 1, 2023 and June 1, 2024, respectively, for the second and third TLCF Payments, or such earlier date as any TLCF Payment was due. If any of the Theaters are disposed, closed or contracted to be managed by another party prior to the end of the third year after Plan Confirmation, the GUC Claims Trust shall receive 8% of the projected Theater Level Cash Flow for that location through year 3 (such projection to be reasonably agreed by the GUC Claims Trustee). If any of the Theaters is transferred to an affiliate of the Debtors, that affiliate must assume the obligations under the TLCF Note with respect to any such Theater. All TLCF Payments (and the underlying calculations) shall be subject to audit, following which the TLCF Payments may be adjusted."

To account for the GUC Claims Trust, the Third Amended Plan reduces the proposed distribution to holders of Convenience Claims to 12% from 15% and beefs up a vague description of the proposed treatment of holders of General Unsecured claims in the Second Amended Plan, which references the trust and TLCF Note, but does not provide specific details of those recovery vehicles.

The Third Amended Disclosure Statement stresses that: "This allocation, subject to highly variable estimated totals of Claims in Class 4 and the speculative value of the TLCF Note, is projected to yield approximately 15% to Holders in this Class." Despite that disclaimer, the Second Amended Plan calls for an estimated recovery for holders of General Unsecured Claims ranging from 11.4% to 15.3%." 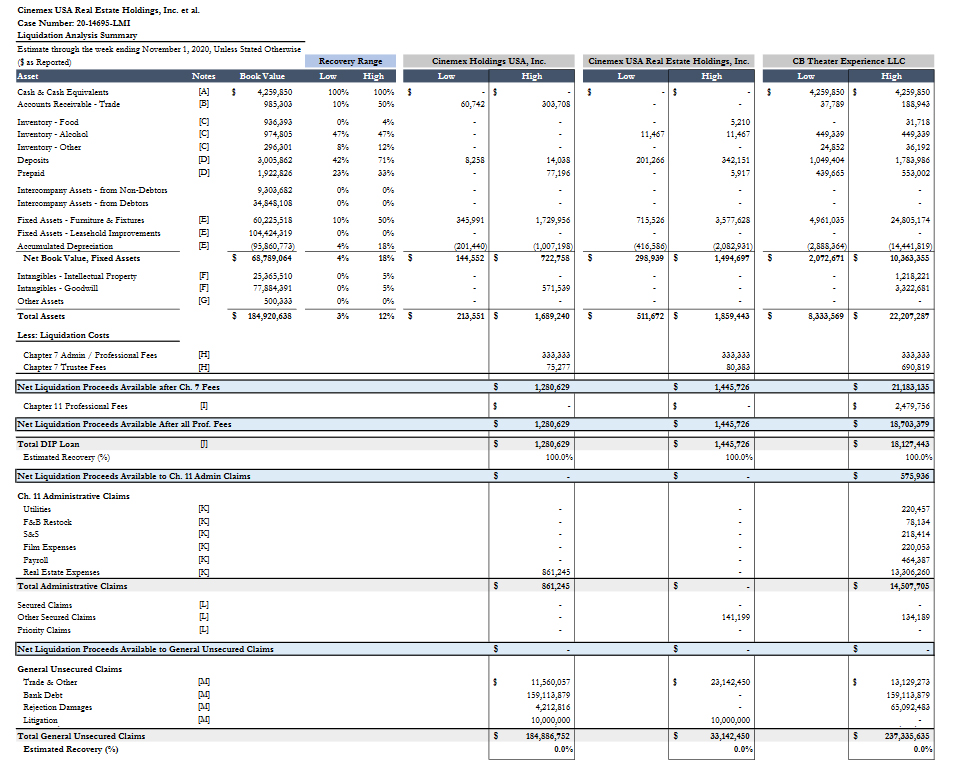 Cinemex is one of the top ten cinema chains worldwide, with 351 sites in 104 cities, 3014 screens and more than 14,000 employees. Founded in 1995 with the intent to revolutionize the movie entertainment industry, Cinemex began installing multiplexes and stadium-style seating with the primary focus of attending every guest’s needs. Today Cinemex continues to offer innovating concepts in cinema-going, including Platino Cinemex and Cinemex Premium, state-of-the-art theaters equipped with luxury seating and first-class dining, Cinemex 3D, and the 4D experience. At Cinemex, our main goal is to offer the best entertainment to our guests.