September 27, 2022 – The Wall Street Journal is reporting that Canadian theater chain Cineplex Inc. ("Cineplex") is revisting the possibility of a merger with Cineworld Group Plc’s US arm (Regal Entertainment Group), and has discussed a potential deal with the UK company’s lenders.

This would mark a dramatic twist in the contentious Cineplex/Cineworld merger story, with Cineworld having earlier left Cineplex jilted at the merger altar, arguing that COVID-stricken Cineplex had breached covenants "including by failing to operate in the ordinary course" (Cineworld itself crumbling under COVID restrictions* unhappy that Cineplex had not managed to fare better) entitling them to walk away from what was an estimated $2.8bn deal.

*In Court filings, the Debtors noted: "The COVID-19 pandemic changed everything… As government-mandated shutdowns led to mass theater closures in early 2020, the industry’s revenue source was abruptly cut off…"

Cineplex successfully sued Cineworld in Canada and the resulting CA$1.29bn damages award (@US$1.0bn now being appealed and with oral argument scheduled for October 2022) instrumental in the Debtors' decision to seek bankruptcy shelter (where it sits below almost $5.0bn of secured debt). At filing on September 7th, the Debtors provided: "While no payment has been required or made by Cineworld to Cineplex based on the pendency of the appeal, the Canadian Court’s judgment has already had a significant negative impact on the Group. Among other things, current and prospective financing sources have cited the judgment in refusing to provide the Group with additional liquidity or flexibility, and Cineworld’s stock price has been impacted and depressed by the overhang caused by the judgment and ongoing appeal."

On September 8th, the Court hearing the Cineworld Group cases issued an interim order authorizing the Debtors to access $1.78bn of debtor-in-possession (the “DIP”) financing (the “Interim Amount”) consisting of (a) $514.0mn of new money working capital term loans (the “Working Capital DIP Commitments”), (b) $1.0bn of DIP Loans which shall be used to be used to refinance the Prepetition Priming Loans (including interest and prepayment premiums, collectively, the “Priming Loan Refinancing”) and (c) $271.0bn of which shall be used to effectuate the repayment of the entirety of the Debtors’ foreign, non-Debtor borrowings (the “RoW Loan Transaction”) [Docket No. 173]. The $150.0mn balance of what is in total of $664.0mn of requested new money Working Capital DIP Commitments is to be made available on issuance of a final DIP order, with consideration of that order now scheduled for October 31st.

As of the Petition Date, Cineworld had approximately $5.34bn in total funded debt obligations, approximately $5.08bn of which is held by Debtor entities. The following table depicts the Debtors’ prepetition capital structure: 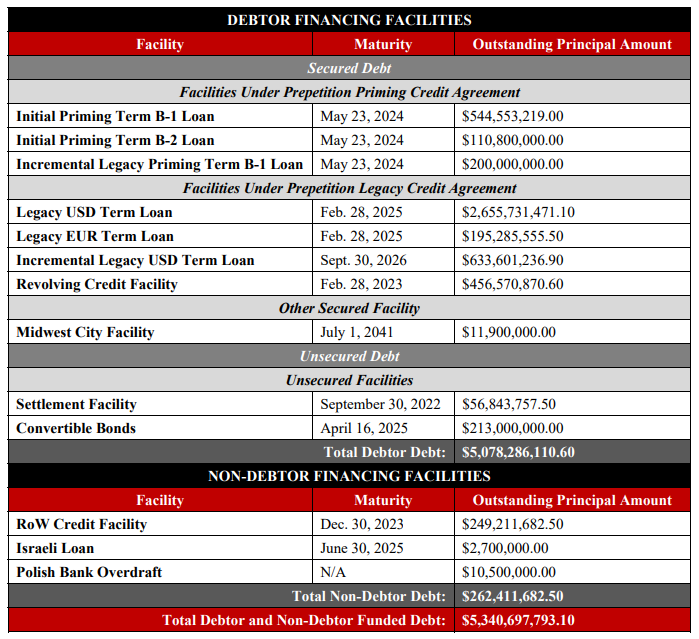 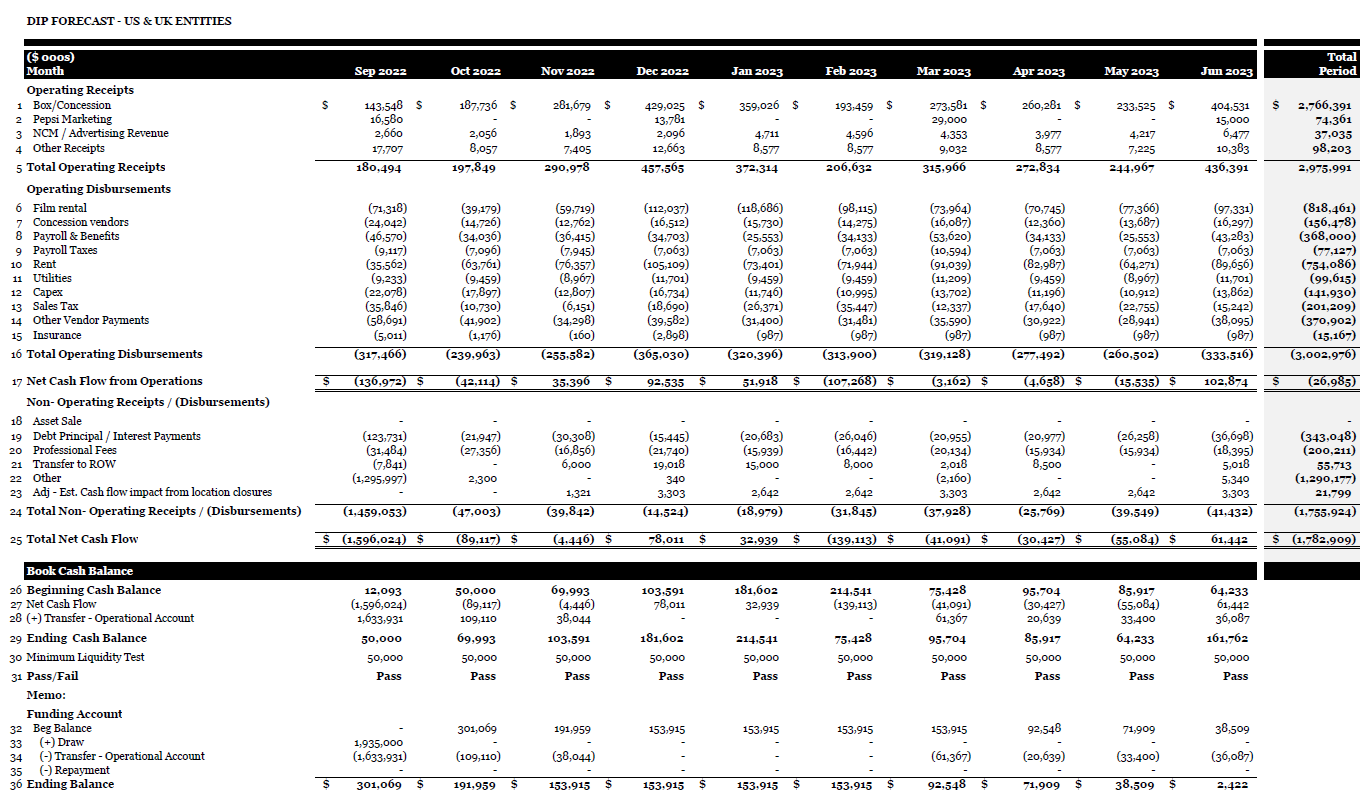 According to the Debtors: “Cineworld Group plc was founded in 1995 and is now one of the leading cinema groups in Europe. Originally a private company, it re-registered as a public company in May 2006 and listed on the London Stock Exchange in May 2007. Currently, Cineworld Group plc is the only quoted UK cinema business. Cineworld's acquisition of Regal Entertainment Group has created the second largest cinema business in the world (by number of screens). Cineworld currently operates in the UK, Ireland, Poland, the Czech Republic, Slovakia, Hungary, Bulgaria, Romania, Israel and the US." 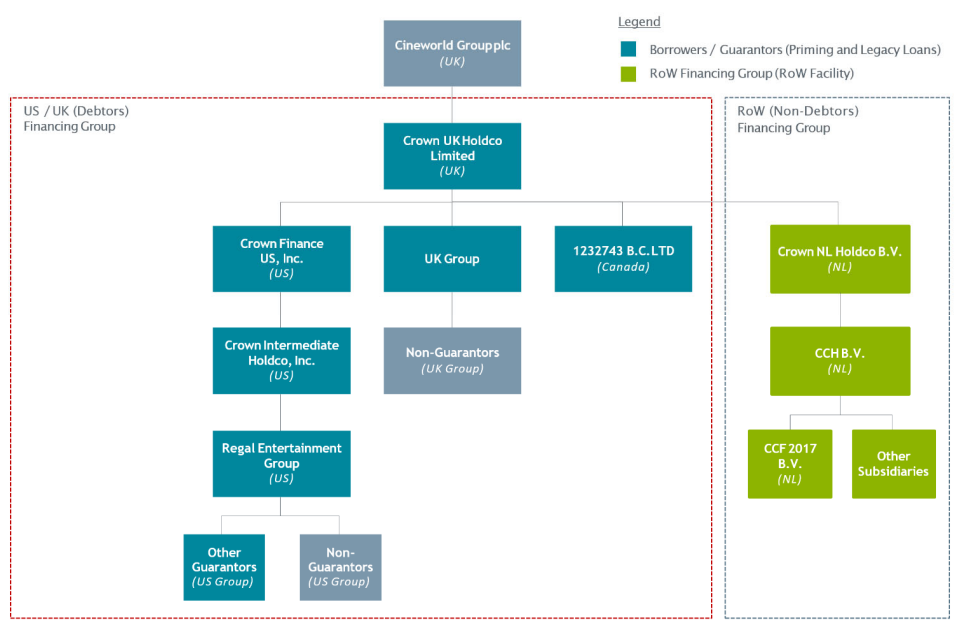 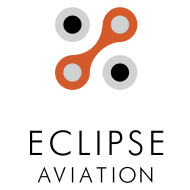