In a December 11th press release announcing the agreement of a restructuring support agreement and the intention to file for chapter 11 protection, the Debtors advised that: “4L Holdings ('4L' or 'the Company'), which operates as Clover Technologies Group, today announced that it, along with certain of its affiliates, has entered into a restructuring support agreement (the 'Agreement') – that will equitize all of the Company's approximately $644 million in long-term debt – with the majority of its equity holders and a group of its lenders representing over 67% of its outstanding long-term debt."

The press release also details two steps the Debtors are taking to rationalize what has been an over-complicated and technology-challenged business model: "In addition to the restructuring, the Agreement also supports two recently announced strategic transactions: Clover Wireless' acquisition of Teleplan, which closed on December 4, 2019, and the sale of Clover Imaging to Norwest Equity Partners, which was announced on November 21, 2019, and is expected to close in mid-December 2019.  Upon consummation of the sale of Clover Imaging, the proceeds from the sale [$215.0mn subject to closing adjustments] will be used to pay down a portion of 4L's current outstanding long-term debt."

In a declaration in support of Plan filing [the "Buck Declaration," Docket No. 18], the Debtors' CFO Andrew Buck provides more background on the two strategic transactions and hopes they get some respect: "More than six months of stakeholder engagement and coordination finds Clover on the brink of making the impossible the possible—landing the 'Triple Lindy'—a dive so difficult that even the great Thornton Melon had his doubts [Thornton Melon here]. With two of three 'diving boards' already in play, these cases are filed on the backs of (1) a $50 million acquisition; (2) a $215 million sale; and (3) an agreed upon prepackaged restructuring and recapitalization. Clover completed its acquisition of Teleplan International N.V. for $50 million on December 4, 2019. And, just hours before filing these cases, Clover closed the $215 million sale of its printer supply services business to NEP. The foundation for these transactions, as well as a holistic balance sheet restructuring, is a restructuring support agreement and a prepackaged plan supported by more than 70% of Clover’s secured lenders and its equity sponsors. It represents a deliberate effort by Clover and its sponsors, in the face of shifting market trends, customer contraction, and a May 2020 maturity, to proactively organize stakeholders in an effort to truly maximize value."

The Debtors have entered into a restructuring support agreement (the “RSA,” first executed on November 21st and subsequently amended on December 10th, attached at Exhibit C of the Disclosure Statement) with certain holders of term loan secured claims (the “Consenting Term Loan Lenders”) and certain holders of the Debtors’ existing equity interests (the “Consenting Sponsors”, and collectively with the Consenting Term Loan Lenders, the “Consenting Stakeholders”) that provides for a comprehensive in-court restructuring that is intended to deleverage the Company’s debt obligations and leave the Debtors in position to quickly emerge from Chapter 11 as a going concern.

Summary of Classes, Claims, Voting Rights and Projected Recoveries (defined terms as defined in the Plan and/or Disclosure Statement)

As of December 13, 2019, the Debtors has approximately $644.1mn in aggregate funded-debt obligations arising from a May 8, 2014 term loan credit agreement (the “Term Loan Credit Agreement,” and the term loans thereunder, the “Term Loans”) by and among 4L Holdings Corporation, as holdings, Clover Technologies Group, LLC and 4L Technologies Inc., as borrowers, the lenders party thereto (the “Term Loan Lenders”), and Wilmington Savings Fund Society, FSB, as administrative agent (as successor to Bank of America, N.A.).

As of December 13, 2019, the Debtors’ ultimate parent (ie 4L Technologies Inc.) has approximately 1,712,233 shares outstanding, of which approximately 68.35% is held by Golden Gate Capital and certain co-investors including JP Capital Partners, approximately 21.29% is held by current and former management including Chairman Jim Cerkleski and affiliated trusts, and approximately 10.36% is widely dispersed among legacy interest holders.

The Debtors were formed in 1996 around a simple, single set of products and services: They put toner into used printer cartridges. Over the ensuing decades they branched out into three increasingly competitive and technologically challenging segments, (i) the Imaging Business, evolved from their original business, (ii) the Wireless Business, acquired in 2012 and focused on the remanufacturing/refurbishment of mobile phones and (iii) the Telecom Business, which focused on sales and services relating to networking equipment and which was sold in 2018. Each of the two remaining business segments has operated in increasingly distressed markets and subject to a looming May 2020 maturity of the Debtors' almost $650.0mn of bank debt.

The Buck Declaration states: "Despite Clover’s success in the technology device industry and its competitive market share, industry-wide changes have directly and negatively affected Clover’s ability to provide services to some of its largest customers. Major OEMs [ie original equipment manufacturers] have exponentially grown or consolidated, and wield more influence than ever before. These consolidated OEMs have introduced aggressive pricing programs and imposed rigorous quality standards, reducing the demand for after-market suppliers and remanufacturers like Clover. Technical progress has also taken its toll on Clover—as a result of the dramatic improvement in the quality of mobile devices, devices remain in the market longer, resulting in decreased demand for remanufactured and remarketed devices. And in June 2019, Clover lost two major customers. In the face of these industry disruptions, Clover was also contending with a first lien term loan maturity of approximately $650 million in May 2020.

The fast pace of evolution in the technology hardware industry and macroeconomic trends in the printing supply and consumer device industries led Clover to begin exploring restructuring options as early as 2016. At the time, customers of the Imaging Business were experiencing depressed demand for printers and associated supplies at a macro level due to an increase in digital (as opposed to print) content, as well as increased competition from foreign vendors and remanufacturers that cut corners on quality and labor to decrease overhead costs. In response to this constricting market, the Imaging Business’s customers consolidated their businesses and tightened trade terms with service providers like Imaging, causing increased uncertainty in a shrinking market.

In early 2016, in light of the above challenges and its outstanding indebtedness, Clover retained an investment bank to help market the entire Clover enterprise for a potential sale, including all three of the Imaging Business, Wireless Business, and Telecom Business. Clover ran a full marketing process, in which it contacted a considerable number of potential buyers and entered into advanced negotiations with a potential foreign purchaser. Negotiations were ultimately terminated due to U.S. regulatory hurdles. Over this same period, Clover explored several opportunities to refinance its Term Loans, but these efforts did not result in a definitive refinancing transaction. After terminating the sale of the whole business, Clover refocused its strategy towards optimizing efficiencies in each of its operational segments. To better address the distinct operational needs within each business, Clover separated the Imaging Business, Wireless Business, and Telecom Business into separate operating units, each with their own business plan, management teams, and operational facilities. In addition, Clover pivoted to exploring the sales of each of these business units, each on a stand-alone basis. On March 21, 2018, Clover closed a sale of the Telecom Business to a strategic purchaser.

In April 2019, a leading wireless service carrier and key customer of the Wireless Business announced it would shift its process for procuring after-market devices for its subscriber base. The leading wireless carrier restricted the key replacement components that could be used to repair mobile phones to those that could be proven to have been reclaimed from phones already in circulation. In May 2019, the carrier decided to sole-source all older model replacement phones from an OEM, and to split the sourcing of newer model replacement phones between the OEM and used phones purchased (as opposed to repaired) from remanufacturers like the Wireless Business." 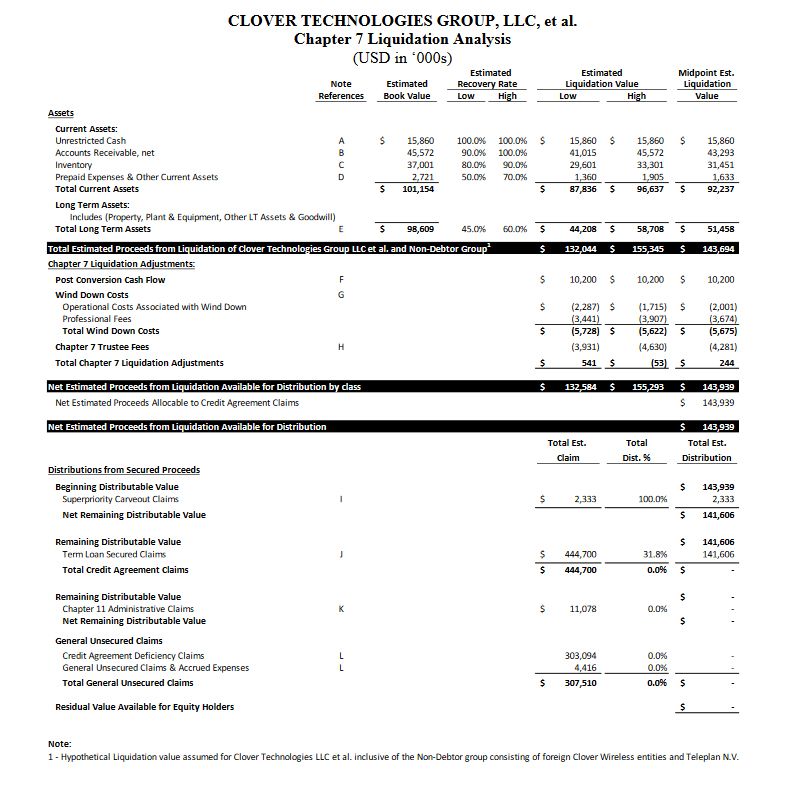 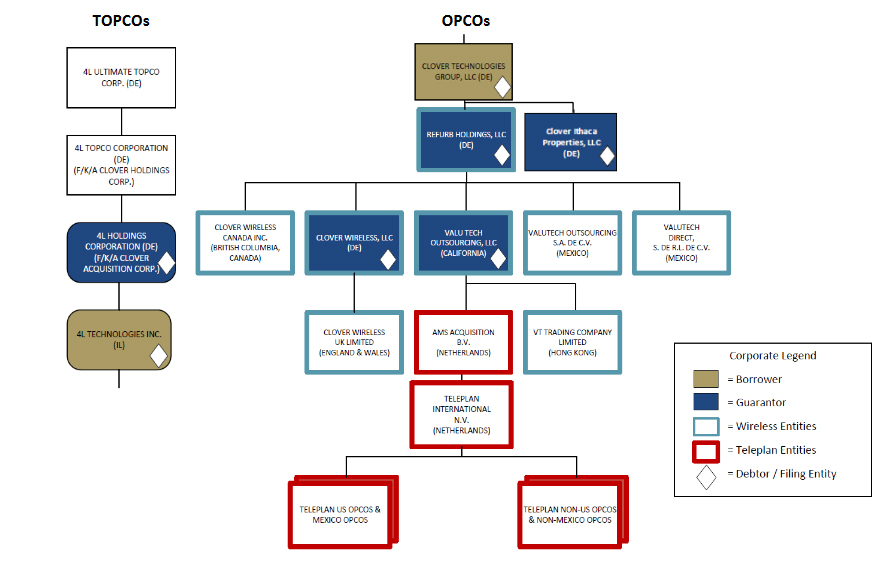