The Debtor entities include CMC II, which provides back-office management services to Consulate facilities, and two of Consulate's nursing facilities. The other 138 facilities are not Debtors in these cases.

The Rundell Declaration (defined below) provides: "…the Debtors’ efforts are focused on continuing to serve residents of the Managed Facilities while implementing a process to market and sell their assets for the highest and best price and distribute the proceeds pursuant to the Bankruptcy Code’s priority scheme."

In a declaration in support of the Chapter 11 filing (the “Rundell Declaration”), Paul Rundell, the Debtors’ chief restructuring officer, detailed the events leading to CMC’s Chapter 11 filing. The Rundell Declaration provides: “The filing of the Chapter 11 Cases was precipitated by the recent entry of the judgments in the Ruckh Litigation. The Debtors lack the financial capacity to satisfy the Ruckh Judgments and cannot risk an interruption in care to the residents of the Managed SNFs that might result from enforcement of the Ruckh Judgments. Although the Debtors remain open to a constructive dialogue to resolve the Ruckh Judgments, prior efforts have not resulted in a resolution.”

The Debtors’ need to seek bankruptcy follows a final verdict in respect of False Claims Act (or “FCA”) litigation commenced almost a decade ago by Ms. Angela Ruckh (“Ms. Ruckh” or the “Relator”), a former employee of the Operator Debtors’ predecessors-in-interest (including, La Vie Health Care Centers, Inc). Ms Ruckh alleged that those predecessor entities “defrauded Medicare and the Florida Medicaid program between January 2011 and May 2011 through certain improper billing practices, including by ‘upcoding’ for services provided to residents at the Marshall and Governor’s Creek SNFs and artificially timing spikes in treatment to increase Medicare reimbursements."

Following the Government’s decision not to intervene in the Ruckh Litigation in April 2012, the Relator continued to prosecute the case and amended her complaint several times. Following a jury trial in January 2017, on February 15, 2017, the jury awarded verdicts against the Debtors for damages in the amount of $115,137,095; after treble damages and penalties were assessed, the court entered judgments in the total amount of $347,864,285 on March 1, 2017. The  judgments were allocated as follows:

After a series of appeals, on February 9, 2021, the District Court affirmed the judgments as to the Medicare awards (ie $257.7mn) noted above.

The Debtors have arranged $5.0mn of debtor-in-possession ("DIP") financing to be provided by CPSTN Operations, LLC, an affiliated entity (the “Proposed DIP Lender”). Prior to the Petition Date, the Debtors engaged Evans Senior Investments (“ESI”) to act as their broker for purposes of procuring financing for the Chapter 11 cases and in connection with a potential sale of the Debtors’ assets. ESI solicited 40 different third-party lenders without eliciting any indications of interest.

ESI also engaged in efforts to market the Debtors' assets further to which the Debtors have negotiated a pair of asset sales; one to a third party in respect of the Debtors’ “Operating Debtors” (ie , Marshall and Governor’s Creek) and the second to an affiliate in respect of CMC II (the “Manager Debtor,” which provides centralized back office management and support services to the Debtors’ 140 Consulate Health Care SNFs).

The Rundell Declaration provides: "With assistance from ESI, the Debtors have also conducted a thorough market analysis in connection with the potential sale of the Debtors’ assets. ESI created marketing information concerning the Debtors and their assets and a data room with diligence information for prospective purchasers. ESI contacted more than 100 entities regarding potential interested in acquiring the Debtors’ assets. Many of these parties entered into confidentiality agreements with the Debtors. ESI engaged with prospective purchasers and responded to various inquiries from such parties.

The process has been successful, and has resulted in multiple term sheets from different prospective purchasers. One term sheet provides for the sale of assets of the Operating Debtors to a third party, while the other term sheet, signed shortly prior to the commencement of these cases, provides for the sale of assets of the Manager Debtor and certain other assets to an affiliate of the Debtors. The Debtors are negotiating stalking horse agreements with each purchaser and expect to file motions in the coming days to approve bidding procedures and schedule hearing dates relating to each of these transactions."

According to the Debtors: “Consulate Health Care is a national leading provider of senior healthcare services, specializing in post-acute care. We offer services ranging from comprehensive short-term rehabilitation and transitional care to Alzheimer’s and dementia care. Consulate Health Care began as a small provider in Cheswick, PA with a strong focus on patient needs. We haven’t waivered from that focus, which has strengthened our family and allows us to sustain jobs in many communities, create rigorous systems of care and deploy technology that makes it easier to understand patient needs. Even as we’ve grown to become the sixth-largest provider in the nation and the largest in the Sunshine State, it’s the little things we do while fulfilling our mission statement of 'Providing Service with Our Hearts and Hands' that really make the difference."

The Declaration adds: "The Debtors are part of a group of Consulate Health Care (or “Consulate”) corporate affiliates that manage and operate 140 skilled nursing facilities (“SNFs”, and such managed facilities, the “Managed SNFs”), which are subject to various master leases between non-Debtor affiliated master tenants and third-party landlords. Generally, the operators of these SNFs (the “Managed SNF Operators”) sublease their respective facilities from master tenants; while, in some cases, the SNFs are leased directly from the landlords. At their facilities, the Managed SNF Operators provide a variety of services that include short-term rehabilitation, comprehensive post-acute care, long-term care, and physical, occupational, and speech therapies.

The 140 Managed SNFs under the Consulate umbrella are spread across six states in the Mid-Atlantic and Gulf Coast. Importantly, approximately 85-90% of the revenue generated by the Managed SNFs comes from government healthcare programs Medicare, Medicaid, or TRICARE for services provided to residents who rely on such programs for their medical expenses. three Debtors are active, operating companies (CMC II, Marshall and Governor’s Creek), while the remaining three are not (Sea Crest, Salus, and CMC I)." 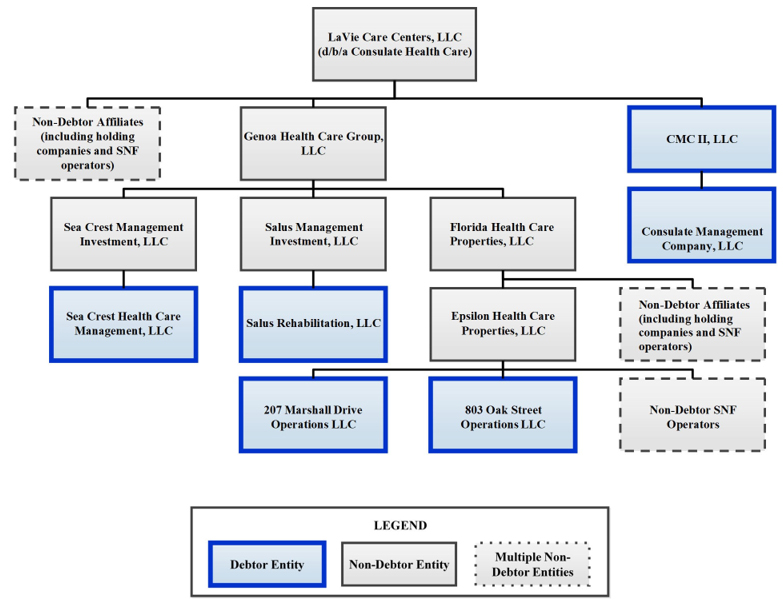