November 10, 2020 – The Debtors and their Official Committee of Unsecured Creditors (together, the "Plan Proponents") filed a First Amended Chapter 11 Plan of Liquidation and a related Disclosure Statement, with each attaching a blackline showing changes to the version filed on October 29, 2020 [Docket No. 451 and 452, respectively].  The amendments do not include any material changes to the summary of classes, claims, voting rights and expected recoveries, otherwise summarized below.

[Update] November 11, 2020 – The Court hearing the Congoleum Corporation cases issued an order (i) approving the Disclosure Statement on an interim basis, (ii) approving Plan solicitation and voting procedures and (iii) adopting a timetable culminating in a December 17, 2020 Plan confirmation hearing [Docket No. 455].

The Plan classifies holders of Claims and Interests according to the type of the holder’s Claim or Interest, as more fully described below. Holders of Claims in Class 6 (General Unsecured Claims) are entitled to vote to accept or reject the Plan.

Pursuant to the Plan, payment of Claims will be as follows:

On October 14, 2020, the Court hearing the Congoleum Corporation case approved the Debtor's sale of substantially all of its assets to Congoleum Acquisition LLC (the “Stalking Horse Bidder) an acquisition entity created by certain holders of the Debtor's 2017 Notes ($3.9mn outstanding at the Petition date) and 2020 Notes ($49.4mn outstanding) [Docket No. 380]. The Stalking Horse APA [see, Docket No. 48, Exhibit A] details an agreed purchase price which includes (i) a credit bid of $28.0mn of the 2017 and 2020 Notes, (ii) the repayment of the $14.7mn owed to holders of the Debtor’s prepetition ABL Loan and (iii) the assumption of “significant” liabilities.

In December 2003, the Debtor, which had historically manufactured products that contained asbestos, filed for Chapter 11 protection (same Court, Case No. 03-51524) to resolve asbestos-related lawsuits and liabilities.

In that lengthy turn through the Chapter 11 turnstiles, the “Prior Debtors” emerged on July 1, 2010 having created a trust to address legacy asbestos liability claims and which held 50.1% of Congoleum’s new common stock.

In a declaration in support of the Chapter 11 filing (the “O'Connor Declaration”), Christopher O'Connor, the Debtor's President and Chief Executive Officer, detailed the events leading to Congoleum’s Chapter 11 filing. The O'Connor  Declaration provides: “Although no one factor caused the Debtor to seek relief under chapter 11 of the Bankruptcy Code, numerous factors contributed to the Debtor’s decision to file its bankruptcy petition."

As of the Petition date, the Debtor’s funded indebtedness included:

Additional indebtedness includes (i) $5.6mn owed under an $8.0mn capital lease from Varilease Finance, Inc. (“VFI”) to finance a new production line at the Debtor’s Trenton plant (the “VFI Lease”) and (ii) $47.0mn of general unsecured claims, the latter including underfunded pension liabilities of approximately $24.0mn.

Liquidation Analysis (See Exhibit B of the Disclosure Statement [Docket No. 452] for notes) 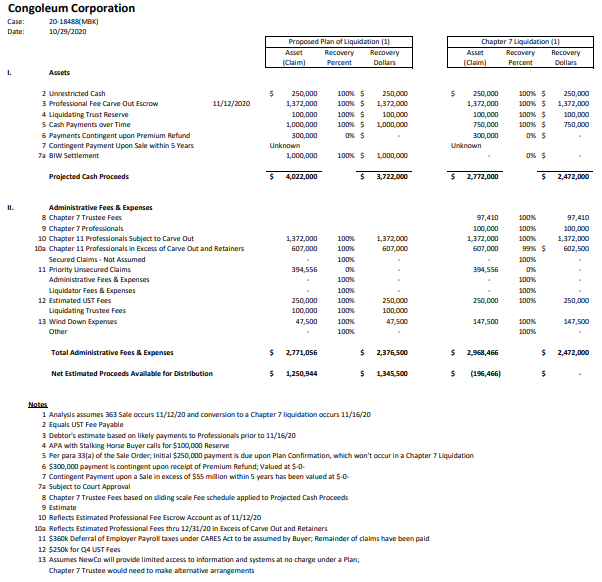 The O'Connor Declaration provides: "As one of North America’s largest manufacturers of resilient flooring, the Debtor has been a leader in the flooring industry for more than 125 years. The Debtor manufactures and sells vinyl sheet and tile products for both residential and commercial markets. Its products are used in remodeling, manufactured housing, new construction, commercial applications and recreational vehicles. The Debtor’s history includes such industry highlights as the introduction of the first no-wax floor, the first chemically embossed vinyl-sheet floor and the first grout-able vinyl tile, which innovations redefined the resilient flooring market.

The Debtor is the only flooring manufacturer in the United States that produces solely resilient flooring. Resilient vinyl flooring is a durable, cost-effective and design-driven value alternative that appeals to a wide variety of end users. Resilient flooring represents 19.4% dollars and 24.7% of square feet of the total domestic flooring market. The Debtor’s sales comprise approximately 25% of the vinyl sheet market and those sales represent a significant share of the vinyl sub-markets, including manufactured housing (80%) and recreational vehicles (40%)."

According to the Debtor: "Since 1886 Congoleum has been committed to developing innovative flooring products that push the industry forward. Congoleum holds numerous patents for novel creations over the years and these patents have resulted in products that are like no others in the industry.

Congoleum manufactures residential and commercial resilient products that are engineered with state-of-the-art manufacturing equipment and that demonstrate Congoleum`s styling and design leadership. Congoleum has plans for a successful future that includes enhanced products and styles that will show off our true flooring expertise."