All of the equity of Cosmoledo is held by Moussechoux, Inc. ("Mousse"). Mousse is also the Debtors' senior lender; although it has agreed to sell the senior debt it holds to an affiliate of Aurify Brands.

The Debtors have entered into a stalking horse asset purchase agreement (the "Stalking Horse APA") with MK USA, LLC, an affiliate of Aurify Brands (the "Purchaser"), further to which the Purchaser will credit bid the senior debt ($72.7mn) which it purchased from Mousse for $2.0mn on September 10th. The Purchaser will also pay $3.0mn in cash and assume certain liabilities. The Stalking Horse APA which is supposed to be attached to the Debtors' bidding procedures motion [Docket No. 18] has not yet been filed.

Aurify Brands is also purchasing the bakery assets of Eric Kayser competitor PQ NY (dba as "Le Pain Quotidien") for $3.0mn.  PQ NY is scheduled to have its own Plan confirmed on September 25th.

In a declaration in support of the Chapter 11 filing (the “Alcalay Declaration”) [Docket No. 2], José Alcalay, the Debtors’ CEO, detailed the events leading to Cosmoledo's Chapter 11 filing. The Alcalay Declaration provides: “The restaurant industry is facing well documented challenges caused by the global COVID-19 pandemic. New York City restaurants have felt this acute pain since mid-March when Governor Cuomo declared a state of emergency for the State of New York which required the Debtors to cease operations. Restaurants are not yet open for in-house dining and many are limited to delivery and take-out options while needing to cover their full overhead. Many longstanding pillars of the industry have closed for good.

The Company’s original business model contemplated expansion to a national footprint in a relatively short period of time….The Company had also expanded out of New York City and opened Stores in Washington, D.C. In or around early 2019, it became clear that the operational overhead and performance of the ‘out of town’ Stores were too great a drag on the Company’s overall profitability. The Company retained professionals and formulated a restructuring strategy that included a recapitalization of Company, the reorganization of their production facilities, a reduction of their footprint and a revision to the structure of Store level management.

That strategy was implemented throughout 2019 and mostly completed in the first quarter of 2020. At approximately the same time this restructuring was nearing completion, the Debtors’ business was devastated by the global COVID-19 pandemic. The Company furloughed approximately 800 employees and shuttered its operations. At the time, it was anticipated that in-Store dining would resume, and the Company could reopen in June. On or about June 18, 2020, it became clear that the phased reopening of New York City, which included restaurants, would not allow sufficient operations to support the Debtors’ recovering financial situation. As of the Petition Date, there is still little prospect of in-Store dining any time soon. After analyzing the financial impact stemming from the macro economic factors impacting the restaurant industry, of the loss of in-Store dining revenue and the continued overhead required to sustain even limited operations (take-out and delivery), the Company determined that there was too great a risk that future operations would fail to generate sufficient capital to repay its obligations in the ordinary course of its business and continue profitable operations. Accordingly, the Debtors decided to not reopen the Stores and began seeking restructuring alternatives in mid-July.”

Between January 29, 2016 and February 26, 2018, Cosmoledo entered into a series of notes (the “Prior Notes”), payable to Mousse to fund the Debtors’ operations and growth strategy. The aggregate principal amount of the Prior Notes was $59.0mn

According to the Debtors: “Maison Kayser, a global brand, is an authentic, artisanal French boulangerie initially formed in Paris in 1996. Maison Kayser has approximately 150 shops in over 22 different countries.

Cosmoledo, a Delaware limited liability company, was formed on December 21, 2010,and the Company opened its first Store located at 1294 Third Avenue in New York City in 2012.

Each of the Stores is a “fine casual” dining concept that follows one of the following business models or combines models tailored to the anticipated market. Three of these four business models derive a percentage of their revenue from in-Store dining.

The Debtors’ production and operational costs are historically high because of the nature of their business concept. The company’s trade name derives from its namesake and licensor, Eric Kayser. Mr. Kayser has long been recognized as one of the most talented artisan bakers of his generation and has built his reputation on his passion for bread, the quality of his products and his incredible skill to combine authenticity and innovation in the world of French artisanal bakeries." 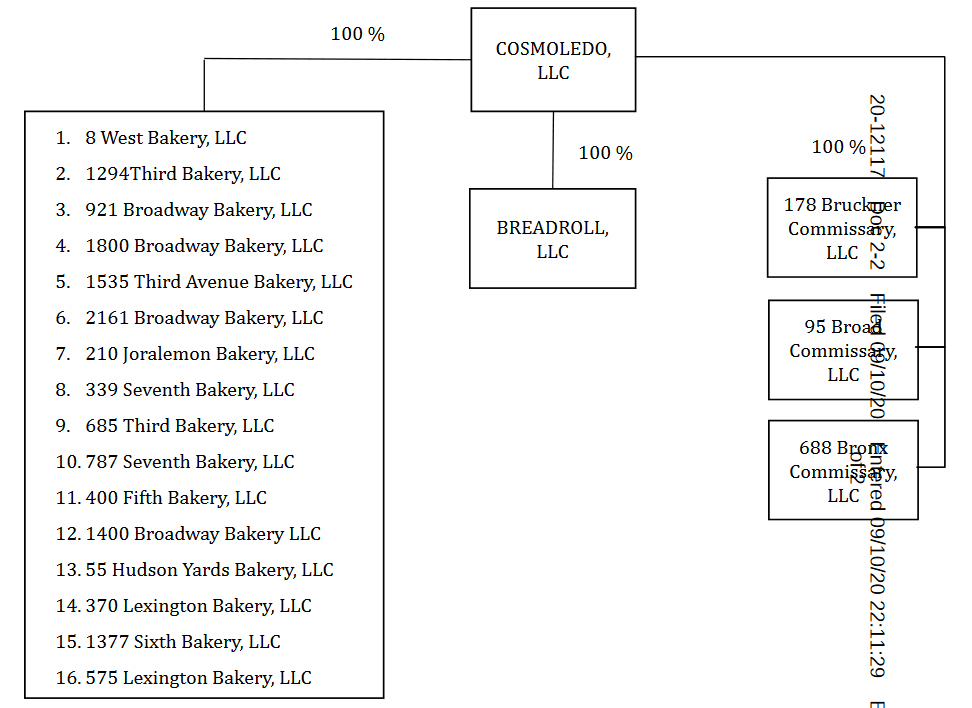