December 8, 2021 – The Debtor filed a motion seeking authority to access up to $12.0mn of debtor-in-possession (“DIP”) financing which is to be provided by prepetition lender Hankey Capital, LLC ("Hankey" or the "Lender”), with the financing to be used to cover expenses in respect of a property located at 944 Airole Way, Los Angeles, CA 90077 (the “Real Property”) [Docket No. 66] and to see the Debtor through a sale of that property. The Real Property is the famous/infamous Los Angeles megamansion "The One" with DIP lender Hankey the largest of secured lenders and owed $123.8mn in respect of prepetition debt.

The Debtor argues that it is sitting on a comfortable $148.2mn equity cushion, but that even if its own valuation is a bit off (say by $75.0mn), it has "more than substantial funds to pay all allowed claims in full." Notwithstanding that apparently very plush equity cushion, the Debtor was not able to interest any third party lenders, although undoubtedly a few of the 15 potential lenders marketed used the opportunity to do a bit of on-site diligence at The One. In the end, the DIP lending role fell to Hankey Capital, the most exposed of several secured lenders (who have otherwise fought amongst themselves as well as with the Debtor, but apparently have nonetheless acquiesced to Hankey's role as DIP lender), with Hankey in line for 8.5% interest on the loan and a 1% facility fee.

Hankey touts itself as "a private direct lender originating bridge financing in the 3 million to 100+ million dollar range secured by real estate located in California. We specialize in time-sensitive and value-added deals underserved by banks and other traditional capital sources. In addition, Hankey Capital offers structured finance solutions (including Debtor in Possession financing), totaling over $500 million in recent deals. Currently, Hankey Capital has over $850 million in loans on its balance sheet."

Yogi Securities Holdings is led by doctor-turned-real-estate-investor Joseph Englanoff who has accused Hankey of manipulating the sale process for its own benefit.

Not including the Debtor’s existing alleged secured lender creditors, the Debtor contracted approximately 15 potential lenders seeking proposals for debtor in possession financing. The Debtor also reached out to Hankey, Inferno, and Yogi (i.e., the Debtor’s alleged senior secured lenders) seeking proposals for debtor in possession financing. The Debtor was unable to obtain sufficient financing from sources other than the Lender on terms and subject to conditions more favorable to the Debtor than under the Loan Agreement, likely because putative lenders were not willing to lend to a debtor without regular income and substantial liens on assets without obtaining liens to protect and secure claims arising from postpetition financing. Indeed, no putative lender contacted by the Debtor was willing to provide financing on an unsecured or even administrative priority basis. All potential lenders required a first priority lien on the Real Property (junior only to valid real property tax liens) to secure any debtor in possession financing.

Accordingly, the Lender requested that the Debtor provide, and the Debtor agreed to provide, the Lender with the DIP Liens (i.e., a first priority lien on the Real Property and Personal Property) pursuant to Section 364(d), as well as the other protections provided for in the DIP Loan Documents and Financing Orders, as described in the preceding Notice of Motion and Motion, to protect and secure the Lender’s claims arising from the DIP Loan.

After considering the lack of better alternatives, the Debtor concluded, in an exercise of its sound business judgment, that obtaining the DIP Loan and providing the DIP Liens and other protections afforded by the DIP Loan Documents and the Financing Orders is in the best interests of the estate and its creditors.

Hankey is a prepetition lender. However, the proposed DIP Loan is being done as a stand-alone basis and is based on terms that were better than those offered by other existing and potential new postpetition lenders. Further, the terms of the DIP Loan were the result of arms-length negotiations between the Debtor and the Lender. Thus, any credit extended, loans made, and other financial accommodations extended to the Debtor by the Lender have been extended, issued or made, as the case may be, in ‘good faith’ within the meaning of Section 364(e).” 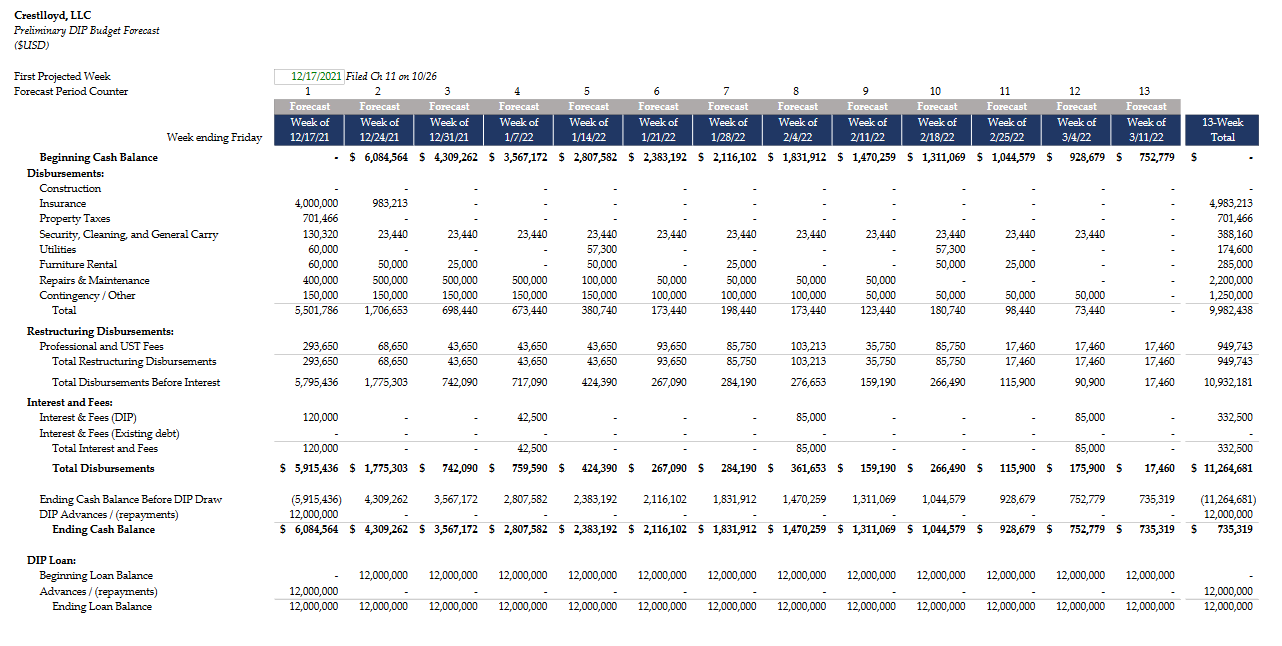 On October 26, 2021, Crestlloyd, LLC (“Crestlloyd” or the “Debtor”) filed for Chapter 11 protection with the U.S. Bankruptcy Court in the Central District of California, lead case number 21-18205. The Debtor, the developer of Los Angeles megamansion "The One," is represented by Levene, Neale, Bender, Yoo & Golubchik L.L.P. Bankruptcy court documents list Lawrence R. Perkins of SierraConstellation Partners LLC as the Debtor's manager.

According to an article published by CNBC, Nile Niami and his Crestlloyd limited liability company, "have borrowed more than $165 million to build and sell 'The One' [over the past four years], according to property documents."

The article further states, "The largest lender is Hankey Capital, founded by Los Angeles billionaire Don Hankey, which has over $115 million in loans on the property. Yogi Securities Holdings, led by doctor-turned-real-estate-investor Joseph Englanoff, has loaned 'The One' over $36 million. Two other entities, Inferno Realty and Maybach Corporation Holdings, have provided loans of $7 million each."

In March 2021, Hankey issued a notice of default on the property. The Los Angeles County Superior Court placed the property into receivership in July and appointed Ted Lanes of Lanes Management as the receiver.

An October 14, 2021 Los Angeles Times article published on Bakersfield.com notes the the foreclosure auction scheduled for "The One" was postponed by the Los Angeles County Superior Court until October 27th after "Englanoff alleged that Hankey reneged on an agreement to have the house completed and sold by real estate brokers, and instead was using the auction process to unfairly take ownership of the mansion or hog the proceeds if it is sold to a third party.

Englanoff, a Los Angeles-area physician and real estate investor who lent $30.2 million to Crestlloyd in 2018 through his Yogi Securities Holdings, states in legal filings that he is still owed $22 million.

He said in a declaration that he had agreed to Hankey's proposal to appoint a receiver in July to finish the house so it could get a certificate of occupancy and be sold through a traditional listing… However, he accused Hankey of pushing ahead with the auction for the billionaire's own benefit even after two brokers last month agreed to list the property for $225 million."

According to the LA Times report, Hankey initially provided an $82.5mn loan to the Debtor in October 2018. Hankey subsequently lent an additional $23.5mn to Crestlloyd, and Yogi Securities provided $30.2mn.

Now, the report explains "Yogi also says the subsequent loans and a change to the original profit-sharing agreement invalidated the first priority position for Hankey’s entire debt. In other words, should the house sell, Englanoff argues, Hankey should not see a penny until Englanoff’s own debt is repaid in full."

This is not Niami's first foray into bankruptcy. The Wall Street Journal reported on December 9, 2020 that a company controlled by Niami filed for bankruptcy in respect of a home he built in West Hollywood.

That property was also reportedly subject to foreclosure after "a limited-liability company tied to Canadian investor Lucien Remillard, one of [Niami's] lenders and a longtime partner, filed a notice of default on the property." Lucien's son, Julien Remillard's, Inferno Investment also provided a loan to the Debtor for "The One" in 2015.

The WSJ article also states "One of the property’s biggest lenders is a limited-liability company tied to Joseph Englanoff, a real-estate investor and another longtime partner of Mr. Niami. Mr. Englanoff took control of another of Mr. Niami’s projects, a Beverly Hills spec house with a 'car museum' that was once priced at $100 million," but later sold that property.