On March 31, 2020, Dean & DeLuca New York, Inc. and six affiliated Debtors (“Dean & DeLuca” or the “Debtors”) filed for Chapter 11 protection with the U.S. Bankruptcy Court in the Southern District of New York, lead case number 20-10916. At filing, the Debtors, a multi-channel retailer of premium gourmet and delicatessen food and beverage products, noted estimated assets between $10.0mn and $50.0mn, and estimated liabilities between $100.0mn and $500.0mn. In a subsequently filed Schedule A/B, the lead Debtor noted $598k of assets and $286mn of liabilities [Docket No. 56].

The Debtors' memorandum in support of Plan confirmation [Docket No. 437] notes, “The Debtors have worked tirelessly over the course of these Chapter 11 Cases to develop and confirm a standalone reorganization plan that enjoys the support of all key constituencies and maximizes return to creditors while right-sizing their balance sheet to capitalize on market opportunity. Notwithstanding the Debtors’ pre-petition struggles and the near-total retail market shutdown during the global Covid-19 pandemic, which has coincided with the Chapter 11 Cases nearly to the day, the Debtors are now pleased to present a Plan that does in fact enjoy the support of all key constituencies and should provide meaningful distributions to their creditors.

As part of the Debtors’ efforts over the past few months, the Debtors have worked tirelessly with the Committee to resolve objections and potential litigation concerns. Ultimately, in October of this year the Debtors reached terms in principle with the Committee, which terms have now been accepted with non-substantive amendment by all of the Debtors’ most significant stakeholders, and which improve outcomes for all holders of General Unsecured Claims…Confirmation of the Plan will allow the Creditor Trust to be formed and vested with nearly $8 million in cash on the Effective Date; an additional $900,000 in cash within one (1) year of the Effective Date; and authority to pursue an array of Assigned Causes of Action for the benefit of unsecured creditors. The Creditor Trust will work to reconcile claims and distribute Creditor Trust Assets to holders of Allowed General Unsecured Claims, providing the Reorganized Debtors with a clean break to focus their efforts on restoration and growth of their global brand."

The Third Modified Disclosure Statement [Docket No. 352] provides, “Subject to confirmation of the Plan, upon the Effective Date, the Debtors will have reduced their debt from approximately $311 million to approximately $11 million, providing the Debtors with the capital structure and reduced debt service burden appropriate to carry on their operations. Upon exiting these Chapter 11 Cases, the Reorganized Debtors’ capital structure will consist of the Exit Facility in the aggregate principal amount of approximately $10 million, plus a five-year secured term loan of $750,000. The proceeds of the Exit Facility, together with cash on hand and cash from operations (including licensing operations), will be used to pay administrative claims, priority claims and the DIP Facility Claim, in full, and to make substantial distributions to their trade creditors, landlords and other Holders of General Unsecured Claims (other than Pace Development, Pace Food and the Bank). The Debtors respectfully submit that the Plan maximizes recoveries for the Debtors’ stakeholders, right-sizes the Debtors’ balance sheet and preserves the Debtors’ ability to operate and develop the value of their assets for the benefit of vendors, suppliers, landlords, and past and future employees.

The following is an overview of certain additional terms of the Plan:

On November 3, 2020, the claims agent notified the Court of the Plan voting results [Docket No. 404], which were as follows:

The Baum Declaration [Docket No. 3] stated: "To enable the Debtors to operate effectively and preserve estate value as it works toward its goal of entering into  a reorganization transaction for the benefit of its creditors and shareholders…;" the shareholders clearly being Pace and the creditors also prominently featuring Pace, which lent the Debtors $250.0mn "to fund the Debtors’ operations and failed expansion efforts." In some parts of the Baum Declaration, the math does not seem to add up with that Declaration noting $275.0mn of unsecured debt with $250.0mn owed to Pace, $45.0mn owed to Siam Commercial Bank Public Company Limited (“SCB”) and $25.0mn owed to landlords.

In a July 2019 press release announcing an operational restructuring, however, Sorapoj Techakraisri, Pace’s Chief Executive Officer, does touch on some of the operational issues faced by the Debtors' U.S. operations: “The world’s retail market including North America’s has changed swiftly over the past 4-5 years. Prepared foods have been offered on shelves in many grocery stores and some establishments [are] now providing dine-in options. While online shopping for Americans has increased 30 percent, [requiring] Brick and Mortar stores to adjust their business strategies to fit with the ever-changing consumer behaviors.”

Pace Development Corporation loaned to the Debtors cash exceeding $200 million dollars to finance Dean & DeLuca's opening of dozens of new stores and executing licensing agreements for the expansion, promotion and development of the brand. At its height, Dean & DeLuca operated or licensed retail outlets across much of the globe, as well as an e-commerce platform, with plans to open hundreds of additional outlets. To execute its plans, Dean & DeLuca developed a global supply chain, including an exclusive range of private label and branded retail products.

Dean & DeLuca ceased operations in mid-2019 following a liquidity crisis that impeded execution of its expansion strategy. As of the Petition Date, all of the retail outlets owned by the Debtors and their affiliates have closed and all real estate lease agreements have been terminated.

As early as 2017, the Debtors had actively engaged in efforts to right-size their expenses and reorganize their operations. Despite best efforts, by mid-2019, Dean & DeLuca had run out of cash, and Pace was not able to offer sufficient additional loans to fund continuing losses. At that time, the Debtors shuttered all of their owned retail outlets and ceased direct retail operations."

Exhibits attached to the Disclosure Statement [Docket No. 352]:

The Debtors filed Plan Supplements at Docket Nos. 250, 360, 423 and 435 which attached the following documents:

Liquidation Analysis (see Exhibit B of Disclosure Statement [Docket No. 355] for notes) 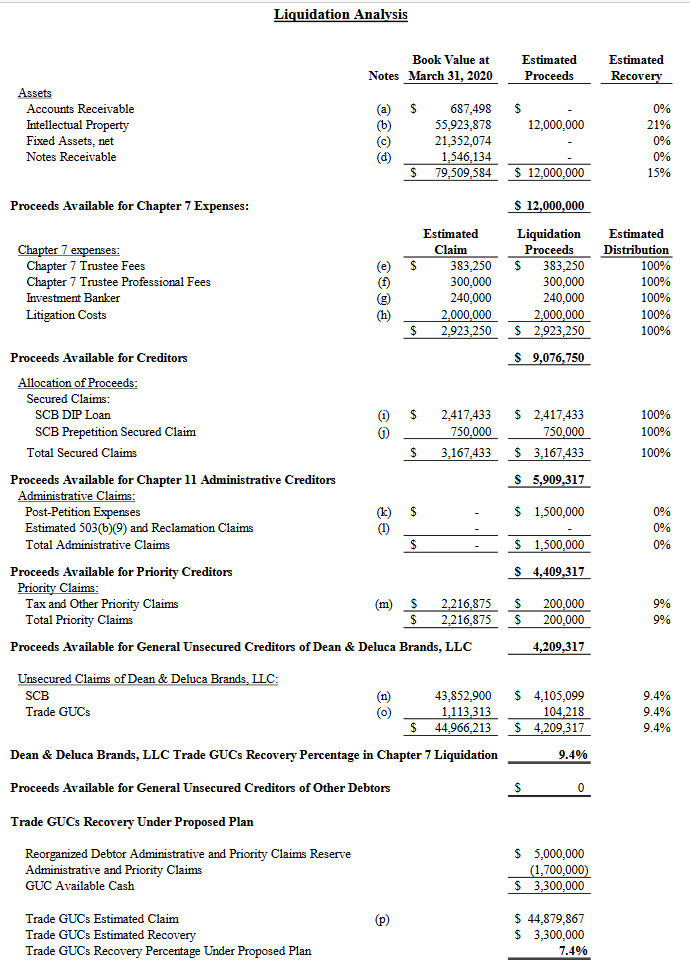 [As described at filing] Dean & DeLuca is a multi-channel retailer of premium gourmet and delicatessen food and beverage products under the Dean & DeLuca brand name. It traces its roots to the opening of the first Dean & DeLuca store in the Soho district of Manhattan, New York City by Joel Dean and Giorgio DeLuca in 1977. Debtor Dean & DeLuca, Inc. was incorporated in Delaware in 1999 and is the 100% owner, directly or indirectly, of each other Debtor.

On September 29, 2014, Pace Development Corporation, through its wholly owned subsidiary, Pace Food Retail Co., Ltd. (together, “Pace”), acquired 100% of the shares of Dean & DeLuca, Inc. from its then shareholders.

At filing, the Debtors were owned by an affiliate of Thai property developer Pace Development Corporation ("Pace") which purchased the Debtors for $140.0mn in September 2014.

In mid-2019, however, the Debtors largely shuttered their New York operations with very little comment from Pace. A July 2019 New York Times article (one of many in the NYT covering the painful demise of a New York culinary institution) noted: "Since it was bought by Pace Development in 2014, Dean & DeLuca has developed all the signs of a company with debt problems: It pulled out of lease agreements; promised and revoked sponsorships; closed its stores in North Carolina, Kansas and Maryland; and has consistently withheld payment from vendors, who are increasingly vocal in their outrage. Small vendors in New York City alone said they are owed hundreds of thousands of dollars. Bien Cuit, a bakery in Brooklyn known for its burnished croissants: $56,000. Colson Patisserie, purveyor of French macarons and other sweets: $24,000. Amy’s Bread, which allowed the company to stock its famous layer cakes: $51,000.

'It stings because so many of us bakers grew up alongside Dean & DeLuca,” said Eleni Gianopulos of Eleni’s Cookies, who sued the company last year for $86,000 and ultimately settled for 50 cents on the dollar: an overall loss. Dean & DeLuca carved its niche with artisanal food products like hers, she said, and now the creators are treated as disposable.

'Getting your product into their store was an honor, like a golden ticket, and now it’s a nightmare.” 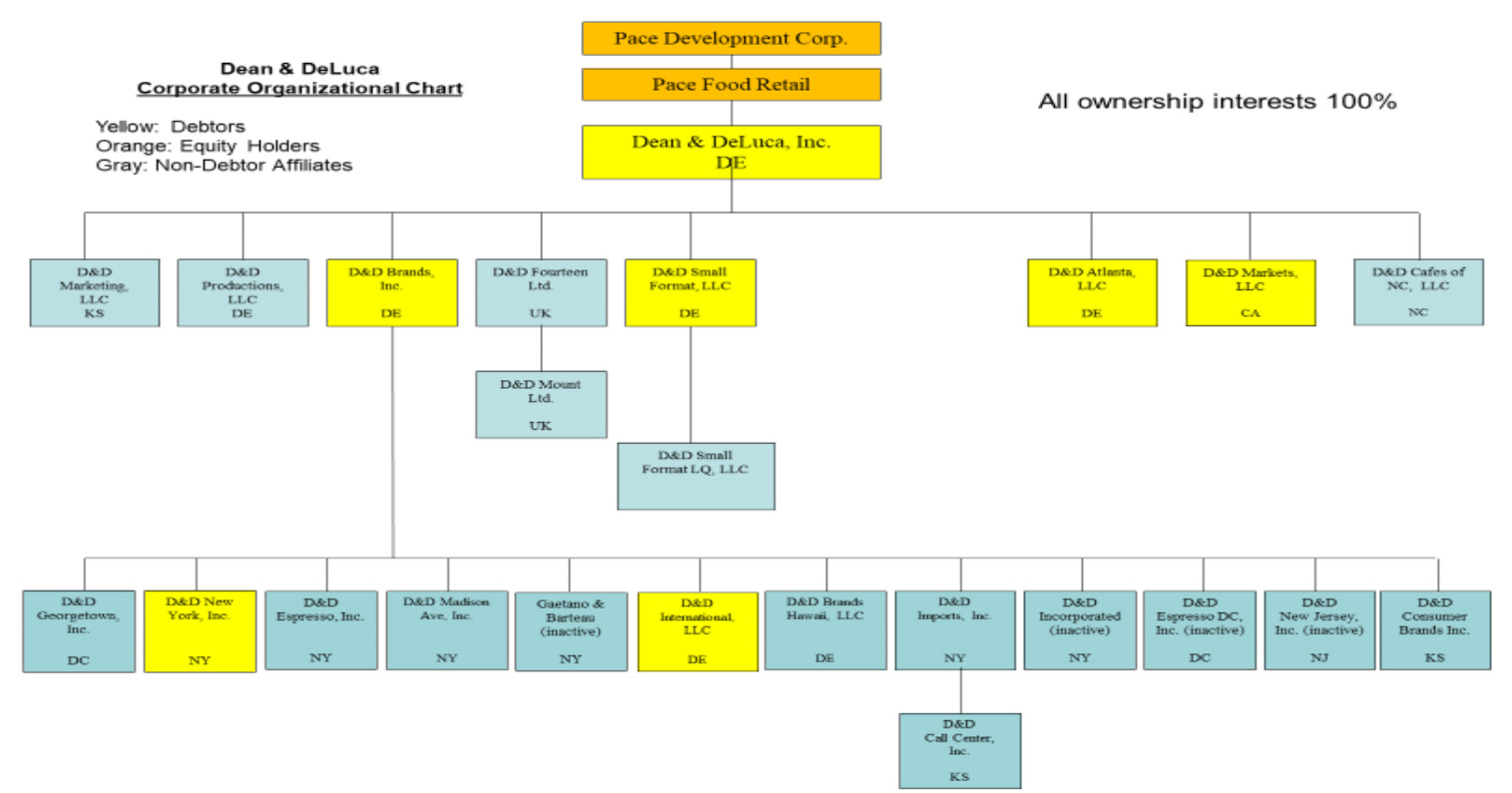 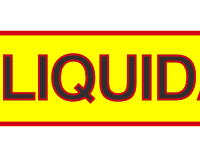