September 2, 2020 – The Court hearing the Denbury Resources cases confirmed the Debtors’ Plan of Reorganization [Docket No. 273]. Also on September 2nd, the Debtors filed a technically modified Plan which attached a redline showing changes to the version filed the day previously [Docket No. 268].

On July 30, 2020, Denbury Resources Inc. and 17 affiliated Debtors (NYSE: DNR; “Denbury” or the “Debtors”) filed for Chapter 11 protection with the U.S. Bankruptcy Court in the Southern District of Texas, lead case number 20-33801 (Judge Jones). At filing, the Debtors, an independent oil and natural gas company with operations in the Gulf Coast and Rocky Mountain regions, noted estimated assets of $4.6bn and estimated liabilities of $3.1bn.

The Debtors' Plan generated a number of objections from holders of subordinated notes and equity who had argued that Debtors' valuation analysis, financial projections etc. were flawed and that the debtors' Plan had unfairly left them out of the money in respect of Debtors that were not insolvent and a bankruptcy process that should even have been commenced.

The Debtors, who had support in each of the four voting classes, including those in which the objectors' claims were placed, pushed back that "the Debtors' shareholders are deeply out of the money….allowing liquidity to deteriorate while waiting for the market to rebound sufficiently for value to reach the Subordinated Notes and equity—is risky and value-destructive. The Debtors fought hard to include the Warrants packages for these Classes in the Plan, despite such Classes being $1 billion or more out of the money, and believe they have already achieved the best possible result for the holders of Subordinated Notes and Existing Equity Interests."

Judge Jones has clearly agreed with the Debtors' statement that: "The Debtors recognize that many holders will lose significant investments and are sympathetic. However, this is the economic reality of their position in the Debtors’ capital structure, as recognized by the significant majorities of holders in these Classes who voted to accept the Plan."

In a press release heralding the Plan's confirmation, the Debtors announced that the Court "has confirmed its 'pre-packaged' plan to restructure the Company’s balance sheet and eliminate Denbury’s $2.1 billion of bond debt (the 'Plan'). The Plan received the overwhelming support of the Company’s stakeholders, receiving high consensus across all voting classes and unanimous acceptance from second lien and convertible noteholders. The Company expects to successfully complete its financial restructuring and emerge from Chapter 11 in mid-September.

Consistent with the previously announced Restructuring Support Agreement, the Plan implements a financial restructuring of the Company’s balance sheet.  The Plan is specifically designed to have no impact on the Company’s operations while fully satisfying all trade, customer, employee, royalty, working, and other mineral interest claims in the ordinary course.  Per the Plan, the Company is authorized to and must pay trade, employee, and ordinary course claims."

On July 29th, the Debtors executed the RSA (attached to Docket No. 3 as Exhibit A) with holders of 100% of loans outstanding under their secured revolver, approximately 67% of their second lien notes, and approximately 73% of their convertible notes. The RSA contemplates confirmation of the Plan to occur on or before September 6, 2020.

The Restructuring Support Agreement contemplates a swift “prepackaged” chapter 11 case, pursuant to which the Debtors will:

By rolling the RBL Facility into DIP financing, the Debtors "will not only be able to reduce immediately the loans outstanding thereunder (and thus reduce their interest expense) after having protectively drawn an extra $200.0mn before the filing, but also to keep their bank syndicate intact for the length of the cases, thus ensuring that the Company has committed financing waiting at emergence."

In a July 29th press release announcing the execution of a restructuring support agreement and its intention to file a prepackaged Plan filing, the Denbury advised that: “it had entered into a Restructuring Support Agreement (the 'RSA') with funded debtholders holding 100% of revolving credit facility loans, approximately 67.2% of second lien notes and approximately 70.8% of convertible notes for a “pre-packaged” plan that will eliminate the Company’s $2.1 billion of bond debt.”

Chris Kendall, Denbury’s President and CEO, commented, “Recently our entire industry has been highly impacted by the global oil demand destruction caused by the COVID-19 pandemic, driving record low oil prices and rapid changes in energy market conditions. In response to this extraordinarily difficult business environment, we have taken multiple proactive steps at Denbury to preserve liquidity, including by reducing our capital spending and general and administrative costs and optimizing operations. This is in addition to many similar actions taken by the Company over the last several years as we navigated significant oil price volatility and made consistent progress in reducing leverage. However, even after taking these steps, it became apparent that a comprehensive financial restructuring would be necessary to address our legacy debt burden and create a clear path forward for the Company."

The following is a summary of classes, claims, voting rights and expected recoveries showing highlighted changes (defined terms are in the Plan and/or Disclosure Statement; see also the Liquidation Analysis below):

On August 21, 2020, the Debtors filed a Plan Supplement [Docket No. 185, subsequently amended at Docket No. 257] which collectively attached the following documents:

On September 1, 2020, the Debtors' claims agent notified the Court of the Plan voting result [Docket No. 258] which were as follows:

The Disclosure Statement provides: "The market difficulties faced by the Debtors are consistent with those faced industry-wide. Oil and natural gas companies and others have been challenged by volatile commodity prices for years. During the past nine years, the NYMEX WTI oil price has ranged from a high of $113.39 per Bbl in April 2011 to a low of negative $37.63 per Bbl on April 20, 2020, and traded at $41.14 as of July 24, 2020. These markets will likely continue to be volatile in the future, especially given the current geopolitical conditions. Additionally, NYMEX futures curves for both natural gas and crude oil indicate an expectation among traders in the derivatives market that these commodity prices are expected to remain at the current depressed levels over the next several years.

The Debtors have arranged DIP financing of up to $615.0mn to be provided by certain of the Debtors' prepetition RBL lenders and agented by JPMorgan Chase Bank (also the prepetition RBL credit facility agent) which will be comprised of new money term loans and a roll-up of the entirety of the Debtors' prepetition credit agreement ($230.0mn at Petition date). As to the new money, the Debtors will have access to $25.0mn upon issuance of an interim DIP order. Upon emergence, the DIP financing will “roll” into an exit facility. The DIP term sheet is attached to Docket No. 3 as Exhibit B.

As of the Petition date, the Debtors had approximately $2.4bn in total outstanding principal amount of funded debt obligations, with that debt as follows: 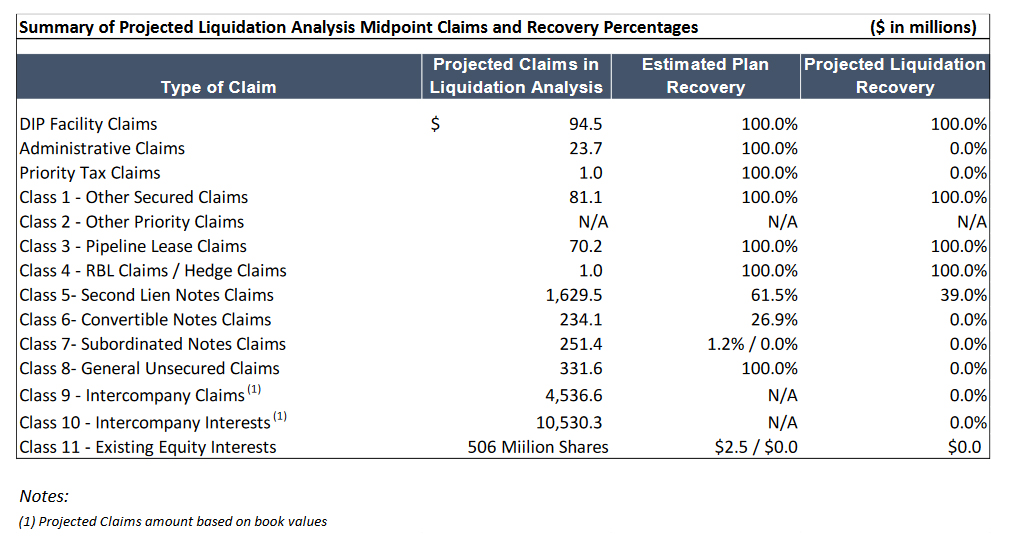 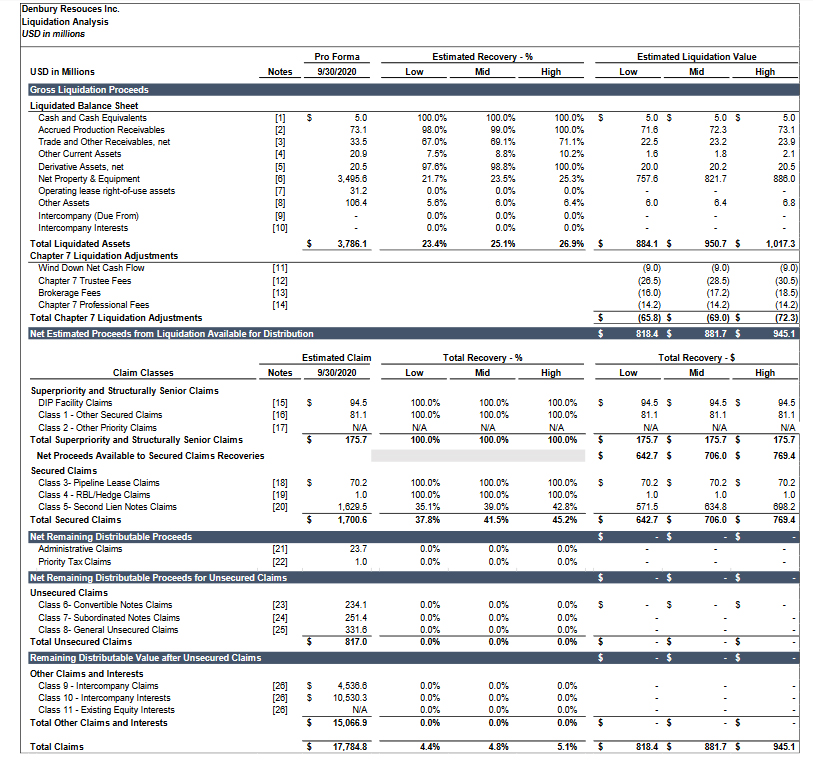 According to the Debtors: "Denbury is an independent oil and natural gas company with operations focused in two key operating areas: the Gulf Coast and Rocky Mountain regions.  The Company’s goal is to increase the value of its properties through a combination of exploitation, drilling and proven engineering extraction practices, with the most significant emphasis relating to carbon dioxide enhanced oil recovery (CO2 EOR) operations."

As of June 30, 2020, the Debtors (i) held interests in approximately 2,946 gross (2,197 net) producing wells, of which all but 636 gross and 150 net wells are Debtor-operated, and (ii) had approximately 951,711 gross (510,602 net) total acres under lease. As of December 31, 2019, the Debtors had estimated proved developed reserves of approximately 206.9 MMBOE of oil and condensate, natural gas, and NGLs, with such estimates based on Securities and Exchange Commission parameters. In 2019, the Debtors’ activities yielded total production of 21,248 MBOE and had an adjusted EBITDAX of $607.0mn. 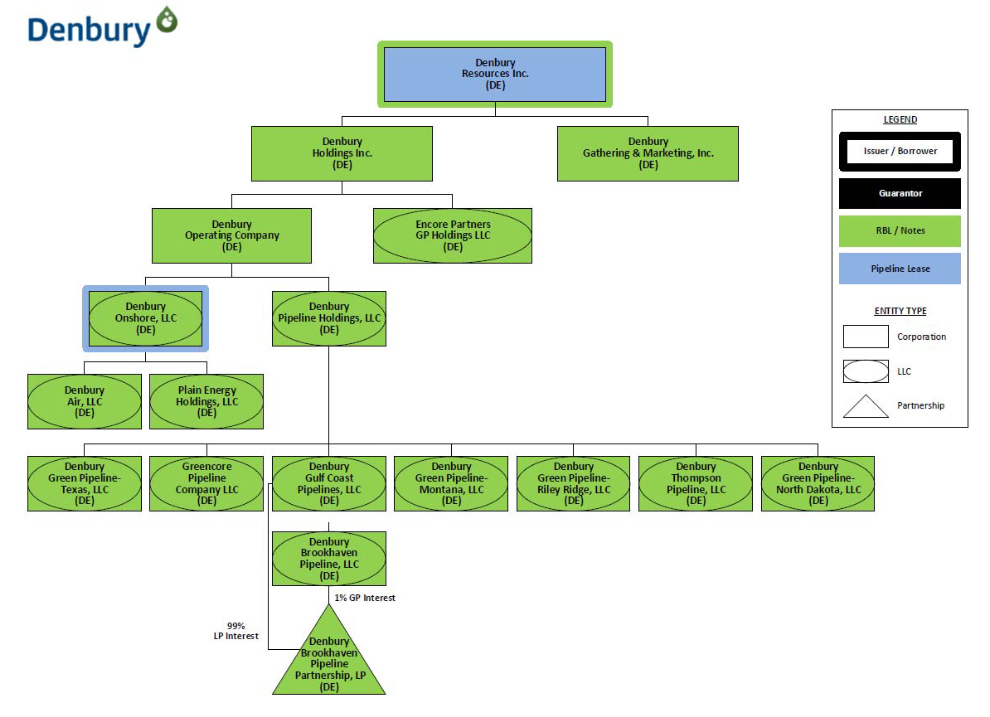