April 19, 2021 – The Debtor filed a Third Amended Chapter 11 Plan of Liquidation and a related Disclosure Statement [with Plan attached to the Disclosure Statement at Docket No. 518]; and separately filed redlines showing changes to the versions filed on March 11, 2021 [Docket No. 519]. The amended Plan now treats Priority Tax Claims as "impaired as agreed upon with such Claimants" (although not yet agreed with New Jersey tax authorities) and as such "Priority Tax Claims and Classes of Claims 2, 3 and 4 are entitled to vote" on the Plan.

On April 28, 2021, the Court hearing the Durr Mechanical Construction cases approved (i) the adequacy of the Debtors’ Disclosure Statement, (ii) Plan solicitation and voting procedures and (iii) a timetable culminating in a July 17, 2021 Plan confirmation hearing [Docket No. 524].

As noted below, the amended Disclosure Statement also includes further language as to the Debtors' ongoing disputes with PSEG and DEP (each defined below), the length of which could (if the disputes go to trial) considerably delay any stakeholder recoveries as to what are potentially the Debtor's most valuable assets (the Debtor seeks damages in excess of $68.0mn and $25.0mn from PSEG and DEP, respectively).

A third significant dispute with Enexio US LLC ("Enexio") has been settled since the Debtor filed for Chapter 11 protection in December 2018, with a $10.9mn arbitration award (paid in June 2019) effectively funding the Debtor during its stay in Chapter 11.

The Disclosure Statement [Docket No. 522] provides: “Distributions to Allowed Claimants under the Plan will be funded from the Available Funds, which predominantly include and consist of the recoveries from the Affirmative Claims. The Liquidating Trustee selected by the Debtor is Kenneth A. Durr (“Durr”), the President of the Debtor. The Liquidating Trustee will implement the Plan through the Liquidating Trust. The Debtor will continue with (a) its limited and wind down operations; and (b) prosecution of the Affirmative Claims, as well as any other claims if beneficial to the Debtor’s estate. As reflected in the Second Stipulation and Order Amending and Modifying Cash Collateral Stipulation and Final Order, the Debtor presently has funds in the aggregate sum of $2.1 million to continue its operations and claim litigation support into the significant future. It is the recoveries on the Affirmative Claims that form the crux of the Debtor’s Plan in order to make and maximize distributions to the Debtor’s creditors.”

NB: “Affirmative Claims” mean the Debtor’s affirmative claims by which the Debtor seeks damages in excess of the aggregate sum of $95.5mn owed to the Debtor by (a) PSEG Fossil, LLC (“PSEG”), (b) New York City Department of Environmental Protection, and (c) IK Construction Inc.

The Disclosure Statement now adds as to the $68.0mn PSEG claim: "The Debtor anticipates a likely affirmative recovery on this Affirmative Claim against PSEG through either settlement prior to trial or through a trial before the U.S. District Court of the District of New Jersey. The trial, if necessary, should occur within the next 1½ to 2 years depending upon, among other things, the following: (a) the court’s calendar and its current backlog of cases due to the pandemic; (b) discovery continuing on its current course; (c) additional required motion practice; (d) the cooperation of all relevant witnesses, and (e) the availability of relevant documents."

The Disclosure Statement also updates on the Debtor's dispute with the New York City Department of Environmental Protection (“DEP”) in respect of which the Debtor is pursuing a $25mn claim. On the status of that dispute, the Disclosure Statement adds: "a subsequent hearing was held on March 17, 2021. While a decision on the City’s motion to compel arbitration of certain of the claims asserted in the complaint relating to substantial completion of the DEP Project is pending before the Court, the parties continue to engage in an informal exchange of information pertaining to the Affirmative Claim. The Debtor anticipates that any potential settlement of the Affirmative Claim may be attainable within the next 6-9 months, whereas a trial in any forum would require at least a year prior to resolution, subject to the court calendar."

The following is an unchanged summary of classes, claims and voting rights (defined terms are as defined in the Disclosure Statement and/or Plan):

Events leading up to the Chapter 11 Filing

The Durr Declaration details the impact of its inability to collect an estimated $122mn in amounts due and owing in respect of three important contracts and the impact of that failure on its liquidity and further contractual relationships. The Durr Declaration details, “DMC has been experiencing severe cash flow issues primarily as a result of the failure of the two owners and one equipment manufacturer of three projects to timely pay—and their abject bad faith refusal to pay—amounts due and owing to the Debtor in connection with those projects. Specifically, the equipment manufacturer and owners who have failed to pay are (a) Enexio US LLC (‘Enexio’), (b) PSEG Fossil, LLC (‘PSEG’), and (c) the New York City Department of Environmental Protection (‘NYC-DEP’) (collectively, Enexio, PSEG and NYC-DEP, the ‘Obligors’). The aggregate sum due to the Debtor from these (mostly) completed projects (and affirmative claims for damages as further set forth below) exceeds $122 million. As of the Petition Date, the Enexio and PSEG projects are 100% complete and the NYC-DEP project is 98% complete…..DMC’s cash flow problems negatively affected its operations because certain subcontractors, vendors and/or creditors have (a) filed liens against projects, (b) filed claims against payment bonds, and/or (c) commenced litigation against DMC for nonpayment, all further exacerbating DMC’s distressed financial situation.

DMC is presently prosecuting litigation against Enexio and PSEG, respectively, to collect the funds justly owed the Debtor. With respect to the claims against NYC-DEP, claims have been filed with the NYC Comptroller’s office. All of the litigations against the Obligors will continue to be prosecuted in earnest in the Chapter 11 case. However, as mentioned above, given the extraordinary failure and refusal of the Obligors to pay their obligations to DMC, DMC was forced into this distressed situation, and is constrained to reorganize via an orderly liquidation in order to be placed in a position to address its financial obligations and affairs….Without a breathing spell provided by the Chapter 11 filing, the aforementioned creditor actions would pose a serious threat to the Debtor’s immediate viability (including its ability to prosecute the Affirmative Claims) to the detriment of all of its constituencies, including its employees.” 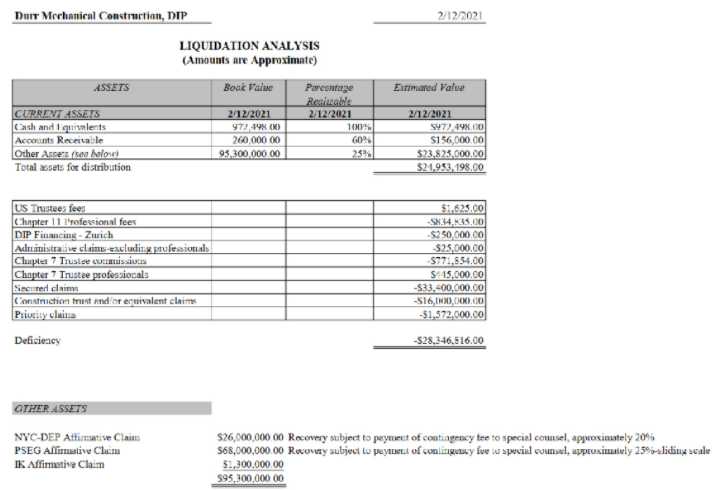