September 28, 2021 – The Debtors filed a motion to extend the periods during which they have an exclusive right to file a Chapter 11 Plan, and solicit acceptances thereof, through and including February 3, 2022 and April 5, 2022, respectively [Docket No. 1151]. Absent the requested relief, the Plan filing and solicitation periods are scheduled to expire on October 6, 2021 and December 6, 2021, respectively.

As the Debtors point out in their lengthy recitation of "progress to date," the Debtors have now sold substantially all of their assets (generating @$225.0mn in proceeds) and have filed a Plan and Disclosure Statement. The significant size of that asset sale proceeds pie goes a considerable way in explaining why stakeholders in these cases, unusual from the outset (eg, a $200.0mn+ cattle fraud to cover up a $200.0mn+ loss in commodities trading markets, a family suicide…the family patriarch apparently killing himself in a head on collision with one of the family's trucks, a bidding war between the Gates Foundation and the Mormon Church, etc, etc), are taking so long to come up with a consensual Chapter 11 Plan.

The Debtors continue to fight with members of the Easterday family as to the ownership of some of the debtor and non-debtor assets sold, fight with lenders Prudential and Equitable over default interest, and fight with almost everyone as to how as yet unallocated pieces of that proceeds pie (more than $100.0mn escrowed, see table below) are to be split up in a Plan that roughly divides the Debtors (and their creditors) into two business groupings ("Ranches" and "Farms"), a bifurcation which is perhaps somewhat clumsy in respect of what were interwoven, family-run businesses.

As to the prospects of finding consensus amongst "competing economic interests involving, among other things, the principals of the Debtors, two official committees of unsecured creditors, multiple secured creditors, and multiple equipment financiers," the Debtors have now "made a ‘mediator’s proposal’ with respect to a global settlement, which the Debtors anticipate will form the basis of a consensual chapter 11 plan."

The motion explains, “The Debtors have made significant progress in the winding down of their operations. Since the Exclusivity Extension Order was entered, the Debtors’ efforts have included the following:

The motion continues, “The Debtors believe that cause exists to grant the requested relief for the following reasons:

On July 20, 2021, further to its bidding procedures order [Docket No. 664] and an auction completed on June 17th, the Court hearing the Easterday Ranches cases issued an order approving the Debtors’ $209.0mn (inclusive of $3.4mn of bidder protections which will not be received by the estates) sale of their “Easterday Land” and “Land” assets to Farmland Reserve, Inc. a Utah Nonprofit Corporation (the “Buyer,” an entity related to The Church of Jesus Christ of Latter-Day Saints) [Docket No. 927]. The assets also included certain property owned by the Easterday family which will be transferred to the Debtors and then on-sold to the Buyer as detailed in the order.

The Buyer had paced bidding with an $188.0mn stalking horse bid, with the significantly augmented sale proceeds reflected in an amendment to a May 19, 2021 purchase and sale agreement (both documents attached to the sale order). The Buyer’s winning bid topped a $208.0mn bid from back-up bidder 100C, LLC, an entity controlled by the Bill & Melinda Gates Foundation.

Prior to the sale, Debtors operated commercial farming and ranching operations, which required significant acreage to accommodate the Debtors’ expansive operations.  In this regard, the Debtors’ operations spanned approximately 22,500 acres over multiple farms, lots/ranches, and other complexes and facilities, which are generally referred to by their common names: (i) Goose Gap Farm, (ii) River Farm, (iii) Nine Canyon Farm, (iv) Cox Farm, and (v) a storage complex on River Farm (collectively, the “Sale Properties”).

The Cash Sale Proceeds paid at the closing of the Sale were distributed approximately as follows: 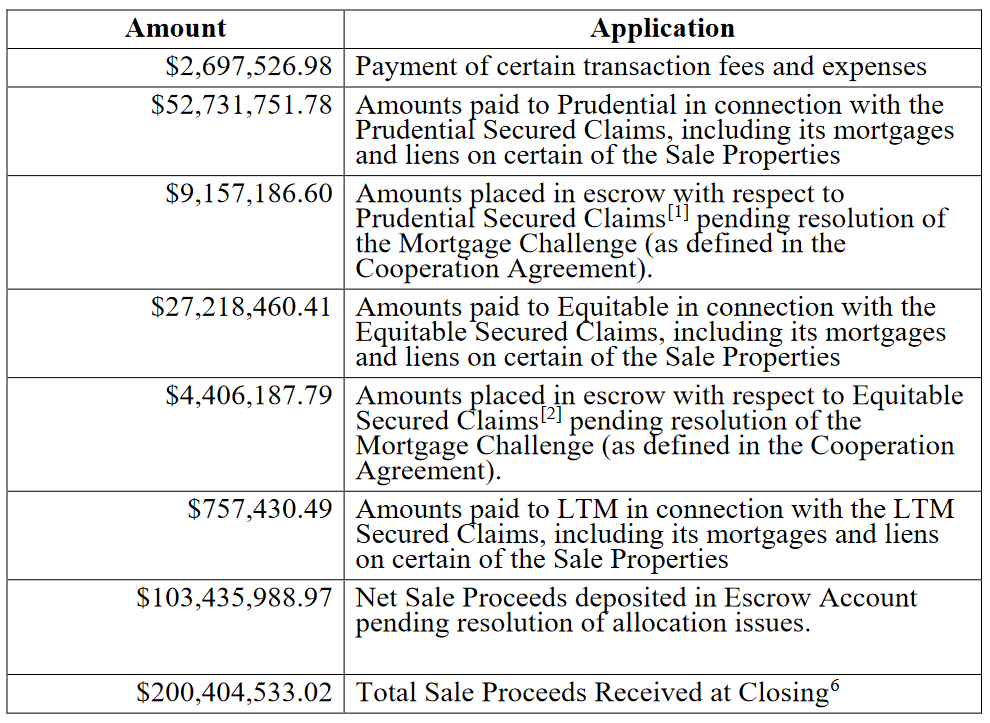 1 Accrued charges for default rate interest were paid to Prudential at closing subject to a full reservation of rights by the Debtors and possible disgorgement.

2 Accrued charges for default rate interest were paid to Equitable at closing subject to a full reservation of rights by the Debtors and possible disgorgement.

6 This amount does not include an additional $5,000,000 to be paid by Farmland Reserve, Inc. (the “Stalking Horse Bidder” or “FRI”) upon entry of a Final Order confirming a plan.

On September 23rs, the Court hearing the Easterday Ranches cases issued an order approving the sale of farm equipment and related personal property (collectively, the “Equipment”) to Blue Tag Farms, LLC (“Purchaser”) for a purchase price of $14,021,720 [Docket No. 1144]. The Equipment APA with amendments is attached to the Order as Exhibit A.

On September 13th, the Debtors notified the Court that absent the receipt of any further qualified bids for the Equipment by a September 10th bid deadline, they had cancelled a September 14th auction and designated the Purchaser as the successful bidder [Docket No. 1076].

The Purchaser is an affiliate of Boise, Idaho-based Agri Beef.

[As previously reported] On December 21, 2020, cattle client Tyson Foods, Inc (“Tyson”) announced (8-K here) that it was undertaking an internal review relating to one of its cattle suppliers (that supplier later named as Easterday) and has determined that "this supplier made misrepresentations regarding the number of cattle the supplier purchased on behalf of the Company’s Beef segment…[with] the misappropriation of Company funds by the supplier caus[ing] the Company to overstate live cattle inventory as of the Company’s fiscal year ended October 3, 2020 by an estimated amount of $285 million." Given Tyson's size, it makes a determination that the alleged fraud (occurring from 2016-2020) "did not…result in a material misstatement of the Company’s previously issued annual or interim consolidated financial statements and that such financial statements may continue to be relied upon."

Although that $285.0mn represented only 2% of Tyson's annual beef supply over the relevant period, the impact may have been considerably more significant at Tyson's meat packing facility near Pasco, Washington which reportedly supplies a substantial proportion of Wendy's beef patties.

Tyson does not detail how the discovery was ultimately made, but at the end of January 2021 it initiated legal proceedings in Franklin County Superior Court where it stated in filings that“… [the Debtor's] President Cody Easterday, has admitted to a scheme in which Defendant [Easterday] has falsified records and submitted fictitious invoices in order to defraud Plaintiff [Tyson] out of more than $225 million. Among other things, Defendant has manufactured documents in order to hide the fact that it was reporting to Plaintiff approximately 200,000 cattle that simply did not exist.” Those filings also note that the allegedly embezzled funds were used “to offset over $200 million in losses (company president Cody Easterday) incurred in the commodities trading markets.”

Tyson is suing to recoup its payments, along with 54,000 head of cattle, and has asked the county court to appoint a receiver. Tyson's efforts to seize cattle and the bankruptcy Court's efforts to restore some semblance of order will be complicated by Easterday's recent reported sale of a feedlot to Agri Beef Co, a Tyson competitor.

In a tragic side story, Cody Easterday's father Gale appears to have ended his life in a head-on collision with one of his company's potato trucks just days before the scandal broke: "Gale Easterday entered onto I-182 in Pasco, Wash., on an exit ramp in the middle of the afternoon. As he drove west in the eastbound lanes he hit a semi head-on that was hauling potatoes for Easterday Farms. The collision caused the semi driver to swerve and hit a second pickup. The semi then veered into westbound lanes where it finally came to a halt. Gale, who was 79 years of age, was pronounced dead at the scene."

Events Leading to the Chapter 11 Cases

On January 24, 2021, Tyson filed a lawsuit against Ranches (the “Tyson Lawsuit”) in the Superior Court of the State of Washington for Franklin County (the “Washington State Court”) and concurrently filed a Motion for the Appointment of Receiver (the “Tyson Receiver Motion”). The Tyson Lawsuit alleged, inter alia, that Ranches’ former president, Cody Easterday, purportedly engaged in fraudulent “forward billing” practices, resulting in Tyson’s overpayment of over $200 million for the purchase and feeding of “non-existent” or “missing” cattle due to the submission of fraudulent invoices and records pursuant to the Cattle Feeding Agreement. The Tyson Receiver Motion was set for hearing during the afternoon of February 1, 2021.

On the morning of February 1, 2021, Ranches filed a voluntary petition for relief under chapter 11 of the Bankruptcy Code, staying the Tyson Lawsuit and Tyson Receiver Motion. The WTB Lawsuit and the WTB Receiver Motion were also stayed, solely as to Ranches. At the hearing on the Receiver Motions, the Debtors disclosed Ranches’ chapter 11 filing and Farms’ imminent chapter 11 filing. As a result, the Washington State Court stayed the proceedings with respect to Ranches and issued a Temporary Restraining Order against Farms, which generally prohibited it from transferring property outside the ordinary course of business.

On February 8, 2021, Farms filed a voluntary petition for relief under chapter 11 of the Bankruptcy Code, staying the WTB Lawsuit and the WTB Receiver Motion against it.

The Debtors were parties to various prepetition loan agreements.  The following table is a summary of the Debtors’most significant secured loan balances as of the Petition Dates: 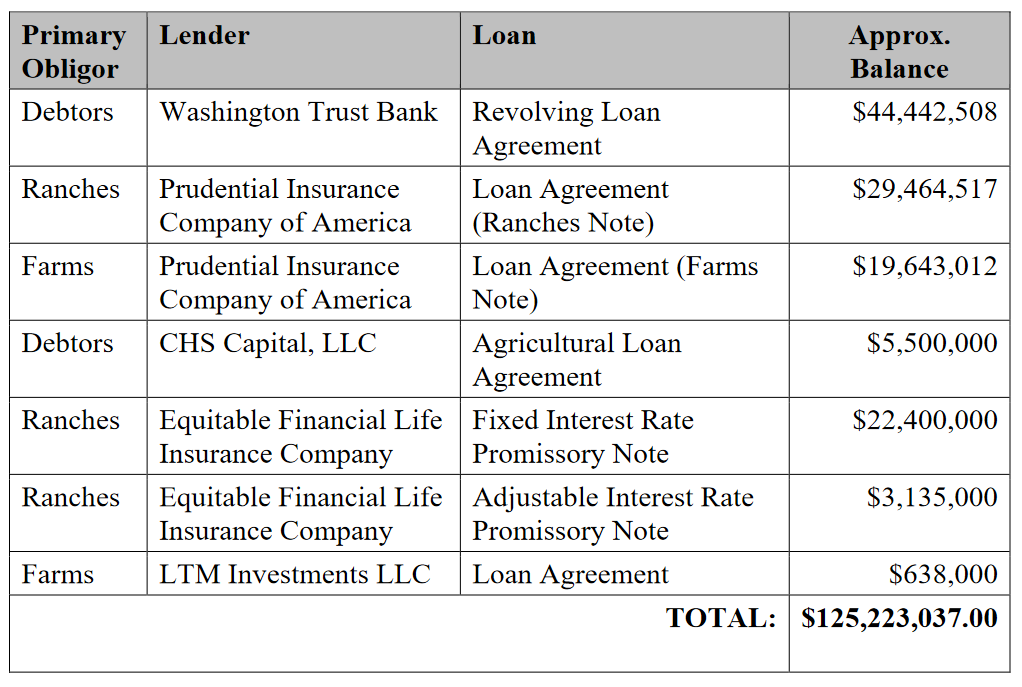 According to the Debtors: “From the early stages of planting to the final phase of packaging and shipping, you will find the Easterday family actively involved in all aspects of delivering you high quality produce you can trust. We are a family-owned and operated farming business. We believe that the size of our business is a unique balance between the economy and efficiency of scale and the attention to detail necessary for customer satisfaction. We are a proud grower and packer of conventionally raised onions and potatoes."