On October 15, 2020, Emergent Capital, Inc and one affiliated Debtor (OTCQX: EMGC; “Emergent” or the “Debtors”) filed for Chapter 11 protection with the U.S. Bankruptcy Court in the District of Delaware, lead case number 20-12602 (Judge Shannon). At filing, the Debtors, a specialty finance company that invests in life settlements assets, noted estimated assets of $175,122,000 and estimated liabilities of $115,856,000.

Emergent Capital, Inc., through its subsidiaries, owns a 27.5% equity interest in White Eagle Asset Portfolio, LP, ("White Eagle") which holds a portfolio of life settlement assets, i.e. life insurance contracts purchased from individuals looking to monetize those contracts during their own lifetimes. White Eagle has a portfolio of 500 life insurance policies having a face value of approximately $2.4bn (the “White Eagle Portfolio”), effectively the amount that would be paid in respect of the 500 insured individuals should they all die tomorrow. As described in "Events Leading to the Chapter 11 Filing," those insured parties continue to die at the wrong time, or not at all, the proceeds from policies that come due unable to cover the Debtors' interest in respect of $117.0mn of borrowings.

In June of 2019, White Eagle, then wholly owned by the Debtors, exited from its own acrimonious Chapter 11 (the "2018 Chapter 11"). That exit was made possible by a settlement with LNV Corporation and White Eagle's agreement to embark on an expedited effort to sell the White Eagle Portfolio. In August 2019, 72.5% of the limited partnership interests in White Eagle (the balance being the 27,5% held now by the Debtors) were sold to Palomino JV, L.P. (“Palomino”) with the $374.2mn proceeds used to pay off LNV (see "The White Eagle Transaction" below). Palomino has since been able to divest itself of a considerable portion of that equity and currently holds 20.61%.

Although the underlying assets are largely identical to those involved in the 2018 Chapter 11, the ownership is clearly different, and in that sense we do not consider this a "Chapter 22."

Overview of the Prepackaged Plan

The Disclosure Statement [Docket No. 115] provides: “The Debtor is a holding company with indirect interests in certain valuable life settlement assets held through non-Debtor White Eagle Asset Portfolio, L.P., a Delaware limited partnership (‘White Eagle’). The ultimate goal of the Plan is to preserve and maximize the value of these interests for the benefit of all the Debtor’s constituents, while addressing Emergent’s existing capital structure. The Debtor’s indirect minority share of the equity interests in White Eagle total 27.5% and are held through an indirect subsidiary of the Debtor called Lamington Road Designated Activity Company, an Irish Section 110 Company (‘Lamington’).

Pursuant to the Restructuring Support Agreements and the Plan:

As a result of the Plan,

On December 18, 2020, the Debtors' claims agent notified the Court of the Plan voting results [Docket No. 172], which were as follows.

On December 10, 2020, the Debtors filed a Plan Supplement [Docket No. 143] which attached the following:

The Declaration [Docket No. 115] provides: “As a result of the White Eagle Transaction, Emergent has been able to participate in proceeds of maturities from the White Eagle Portfolio without the burdens of excessive bank debt and, as a result, Emergent’s financial performance has markedly improved. However, Emergent continues to be burdened by approximately $117 million of noteholder obligations that must be serviced on a going forward basis. In order to address Emergent’s liquidity needs over the foreseeable future, it is Emergent’s business judgment that a restructuring should be effectuated.

Over the course of over a year, Emergent and its representatives heavily negotiated the terms of a possible restructuring, which is now memorialized in the Restructuring Support Agreements and the proposed Plan. At least a majority in principal amount of the holders of the Senior Notes and the Convertible Notes are parties to the Restructuring Support Agreements and support the Plan. Emergent expects that additional noteholders will join the supporting noteholders leading up to confirmation of the Plan.

Debtor Emergent Capital, Inc. (NB: the other Debtor, Red Reef Alternative Investments is not a holder of the White Eagle assets, see structure chart just below) is a holding company that, through its subsidiaries, owns a 27.5% equity investment in White Eagle. White Eagle, which was a wholly-owned indirect subsidiary of the Debtor until August 2019, holds a portfolio of approximately 500 life insurance policies, also referred to as life settlements, having a face value of approximately $2.4 billion (the “White Eagle Portfolio”). The Debtor’s existing common stock is publicly traded on the OTCQX market under the ticker symbol “EMGC”. The Debtor’s principal asset is its indirect interests in the White Eagle Portfolio. The purpose of the Plan is to preserve and maximize the value of such interests for the benefit of all constituents of the Debtor. 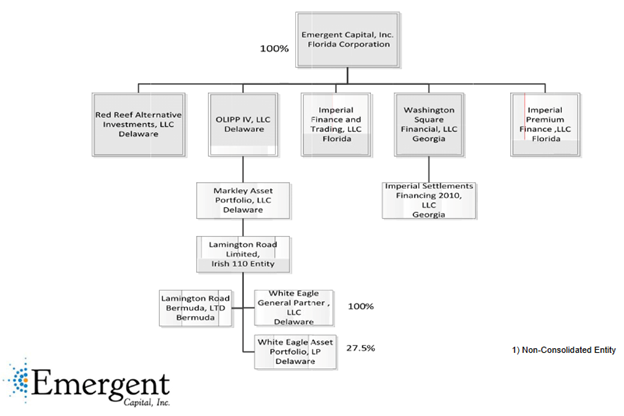 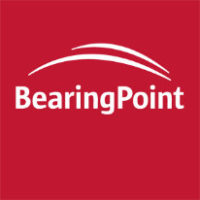