November 17, 2020 – Further to a November 6th bidding procedures order [Docket No. 153] and the completion of a November 16th auction, the Debtors have designated BioUrja Commodities, LLC (“BioUrja”) as the successful bidder for their "equity interests in their eastern hemisphere ("EH") assets" (ie interests in non-Debtor foreign subsidiaries with direct or indirect operations in the United Kingdom, Singapore and Dubai) with a purchase price of $16.4mn and YAS International, LLC (“YAS”) as the backup bidder [Docket No. 194]. The BioUrja asset purchase agreement and YAS asset purchase agreement (each, an "APA") are attached as Exhibits A and Exhibit B, respectively, to the notice, and a sale hearing is now scheduled for November 23, 2020.

Please note that in respect of the BioUrja APA, an amendment was filed on November 17th, which included, inter alia, a slight increase in purchase price (from $16.338mn to $16.4mn) [Docket No. 197].

On September 9, 2020, Energy Alloys Holdings LLC and seven affiliated Debtors (“Energy Alloys” or the “Debtors,” more than 99% owned by Blackstone/GSO Capital Solutions Fund L.P.) filed for Chapter 11 protection with the U.S. Bankruptcy Court in the District of Delaware, lead case number 20-12088 (Judge Walrath). At filing, the Debtors, a supplier of specialty metals to the global oilfield industry, noted estimated assets between $10.0mn and $50.0mn and estimated liabilities between $100.0mn and $500.0mn (funded debt of $97.3mn).

On November 6, 2020, the Court hearing the Energy Alloys Holdings cases issued an order (i) approving bidding procedures in respect of EH subsidiaries and (ii) scheduling an auction/sale timetable culminating in a November 16th auction and a November 23rd sale hearing [Docket No. 153].

The Debtors' bidding procedures motion [Docket No. 79] states, “…in March 2020, the Debtors determined, after considerable discussion and analyses, that these initial restructuring actions were insufficient to address the speed and severity of financial distress facing the Debtors’ Western Hemisphere business. As such, the Debtors determined that it was in the best interests of the Debtors and their estates, and necessary to maximize the value of their estates, to begin an orderly liquidation of their Western Hemisphere assets and to begin evaluating a possible sale of the Company’s more stable and profitable EH Business on a going concern basis. In May 2020, the Debtors began negotiations with the First Lien Secured Parties (as defined in the Cash Collateral Orders) regarding the orderly wind down of the Debtors’ Western Hemisphere operations and disposition of the EH Business. Among other things, these negotiations laid the framework for the Debtors to establish the process utilized to wind down their Western Hemisphere operations and sell their EH Business.

In connection with the marketing process, Moelis invited such Interested Parties to submit initial, nonbinding indications of interest (the “IOIs”) by no later than August 28, 2020 (Eastern Time) (the “Initial IOI Deadline”). Moelis received IOIs from multiple Interested Parties, including certain IOIs after the Initial IOI Deadline (collectively, the “IOI Parties”). To build on this momentum and to further facilitate the sale of the EH Business, on or around September 29, 2020, Moelis, on behalf of the Debtors, distributed a process letter (the “Process Letter”) to the IOI Parties, which communicated critical information about the proposed Bidding Procedures and proposed sale timeline and invited the IOI Parties to engage in a more detailed due diligence review. The Debtors anticipate that the Process Letter will encourage the IOI Parties to conduct a more thorough review of, and submit competitive bids for, the EH Business. The Debtors are hopeful that one or more IOI Parties will submit revised IOIs by no later than October 9, 2020, and that at least one of those parties will become a stalking horse bidder for the EH Equity Interests.”

In a declaration in support of the Chapter 11 filing (the “Gaston Declaration”), Bryan Gaston, the Debtors’ Chief Restructuring Officer (provided by Ankura), detailed the events leading to Energy Alloys’ Chapter 11 filing. The Gaston Declaration states: “In 2019, the Debtors’ net revenues were approximately $88.2 million. However, in late 2019 and into the first quarter of 2020, the Debtors began to experience a softening in demand for their products combined with eroding margins resulting from pricing pressure. Demand for the Debtors’ products is heavily dependent on the amount of oil and gas exploration which in turn is dependent upon commodity pricing.

In March 2020 an industry down-turn was further exacerbated by a Russia–Saudi Arabia oil price war, which reportedly was triggered by Saudi Arabia in response to Russia’s refusal to reduce oil production to keep oil prices at a moderate level. This economic conflict resulted in an immediate and significant drop in the price of oil during the spring of 2020. While this situation has since stabilized, and the oil and gas industry has experienced only a modest recovery, any gains were largely eliminated by the world-wide economic downturn caused by the COVID-19 pandemic. These factors impacted the Company’s global business as a whole, but the impact has been more pronounced in the Debtors’ Western Hemisphere operations, which also are far more heavily leveraged.”

According to the Debtors: “Energy Alloys is the only 100% oil and gas focused supplier of specialty metals to the global oilfield industry.

With this focus we have built one of the widest ranging and tailored oilfield inventories in the world. Our value-added services and resources create a reliable and consistent supply chain that increases product quality and decreases lead times." 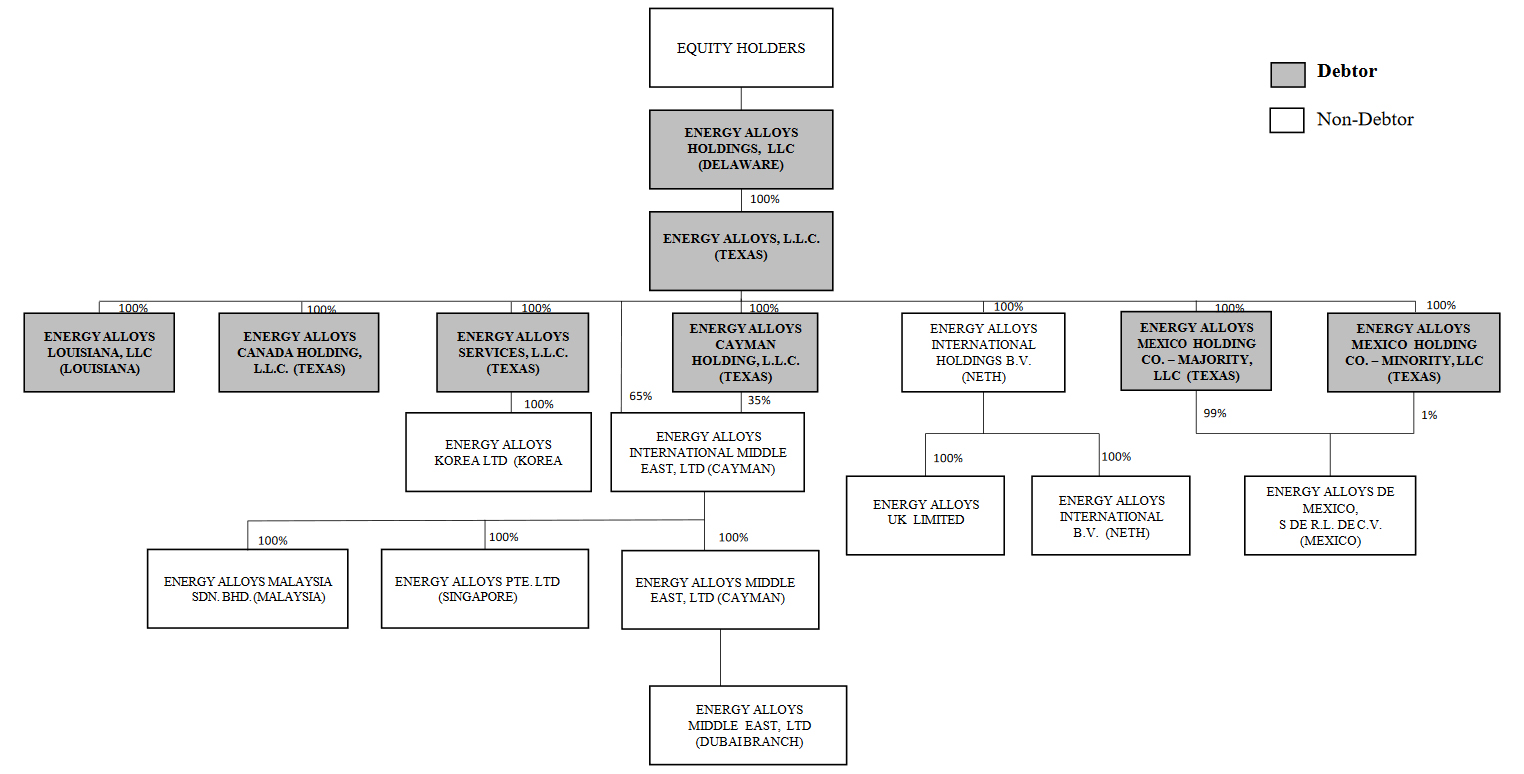