This is the Debtors' second chapter 11 filing in seven years and the third in under 20. In June 2013, Debtor Exide Technologies, LLC spent two difficult years in bankruptcy (lead case Delaware 13-11482, the “2013 Chapter 11 Case”).and eventually emerged having delevered their balance sheet by approximately $600.0mn; raised approximately $165.0mn in new capital; and secured a $200.0mn exit ABL financing facility. The Debtors emerged from their first Chapter 11 in April 2004 (that too a long two year process).

Unlike their first two Chapter 11s, however, the Debtors do not intend to pursue a recapitalization transaction to emerge as a reorganized business and speed will clearly be of the essence as they pursue sales. With respect to any assets that the Debtors are unable to sell to third party purchasers, the Debtors intend to liquidate or abandon such assets.

In a press release announcing the filing, the Debtors “announced a comprehensive strategy to best position its businesses in North America, EMEA, and Asia-Pacific to benefit its employees, customers, suppliers, and other stakeholders across the globe. This strategy is designed to restore the Company’s liquidity, which had deteriorated further as a result of the unprecedented global health and economic impact of the COVID-19 pandemic, while the Company pursues a sale of its assets.

The Company has separately reached an agreement to sell its EMEA and Asia-Pacific business to an ad hoc group of its noteholders, subject to certain conditions outlined in the transaction documents, and subject to higher or better offers. This business is not included in the Chapter 11 proceedings and continues to operate as usual.”

Exide has entered into a restructuring support agreement (the "RSA," see Docket No. 14, Exhibit C) further to which an ad hoc group of the Company’s noteholders (the "Ad Hoc Group") will serve as a credit bidding stalking horse in a sale of the Debtors' EMEA and Asia-Pacific business.The agreement includes a “go-shop” period with a bid submission deadline and auction to be held in early July 2020.

In connection with the RSA, the Ad Hoc Group submitted a binding term sheet (annexed to the RSA) containing certain key terms in respect of their $430.0mn "Europe/ROW Credit Bid." In connection with the Europe/ROW Credit Bid, the Ad Hoc Group has also committed to (i) provide an initial $25.0mn in interim financing to Exide International be used for working capital and general corporate purposes within the Exide Europe/ROW business segment, and up to $50.0mn of new money exit financing in their discretion (collectively, the “Interim Financing Facility”) and (ii) refinance all amounts owed by non-Debtor Exide Technologies (Transportation) Limited under the ABL Credit Agreement.

Exide has obtained a commitment for debtor-in-possession (“DIP”) financing of $40.0mn to be provided by BTC Holdings Fund I, LLC and certain of the Debtors’ prepetition secured lenders (the “DIP Lenders”) and agented by Blue Torch Finance LLC. A copy of the term sheet containing certain key terms of the DIP Facility is annexed to the RSA.

In a declaration in support of the Chapter 11 filing (the “Messing Declaration”), Roy Messing, the Debtors’ Chief Restructuring Officer, detailed the events leading to Exide’s Chapter 11 filing. The Messing Declaration provides: "Even after its emergence from bankruptcy in April 2015, the Company’s business continued to face significant operational challenges, substantial environmental costs, and industry trends that severely constrained its liquidity."

On an operational level, Messing highlights (i) the increased cost of lead following the closure of the Debtors' recycling facilities in Frisco, Texas and Vernon, California, (ii) continued operational inefficiencies (and reduced margins) at mixed-use facilities and (iii) the recent impact of the COVID-19 pandemic.

Operational shortcomings have in turn led to cash flows insufficient to service the level of debt with which the Debtors emerged from the 2013 Chapter 11 and which continued to grow as the Debtors funded expenditures on facility remediation costs and capital investments. As of March 31, 2020, the Company’s indebtedness was approximately 9.2x EBITDA with debt servicing costs have had the knock-on impact on limiting the Debtors’ ability to invest in product and growth initiatives.

The Debtors also have considerable environmental obligations and liabilities which “could cost an additional $200 million or more to address over the next five years.”

As at filing, the Debtors, together with their non-Debtor affiliates, had outstanding funded debt obligations in the amount of approximately $817.4mn in the aggregate, summarized in the following chart:

According to the Debtors: “For more than 130 years, Exide Technologies, LLC (exide.com) has been Powering the World Forward as a global provider of stored electrical-energy solutions for the Transportation and Industrial markets. Headquartered in Milton, Georgia, Exide operates in 80 countries with more than 8,000 employees. Exide produces a range of battery and energy storage systems and specialty applications for the Transportation, Network Power and Motive Power markets and industries including agricultural, automotive, electric, light and heavy-duty truck, marine, materials handling, military, mining, power-sport, railroad, security, telecommunications, utility and uninterruptible power supply (UPS), among others. As one of the world’s largest secondary recyclers, the company is committed to environmental sustainability.”

The Messing Declaration adds: "Exide is a global leader in stored electrical energy solutions and one of the world’s largest producers and recyclers of lead-acid and lithium-ion batteries, with operations in more than twenty (20) countries. The Company is headquartered in Milton, Georgia and through its four global business groups – Transportation Americas, Transportation Europe and Rest of World (“ROW”), Industrial Energy Americas, and Industrial Energy Europe and ROW – the Company provides a comprehensive range of stored electrical energy products and services for industrial and transportation applications. The Company manufactures and distributes transportation and industrial batteries in North America, Europe, Asia, the Middle East, India, Australia, and New Zealand." 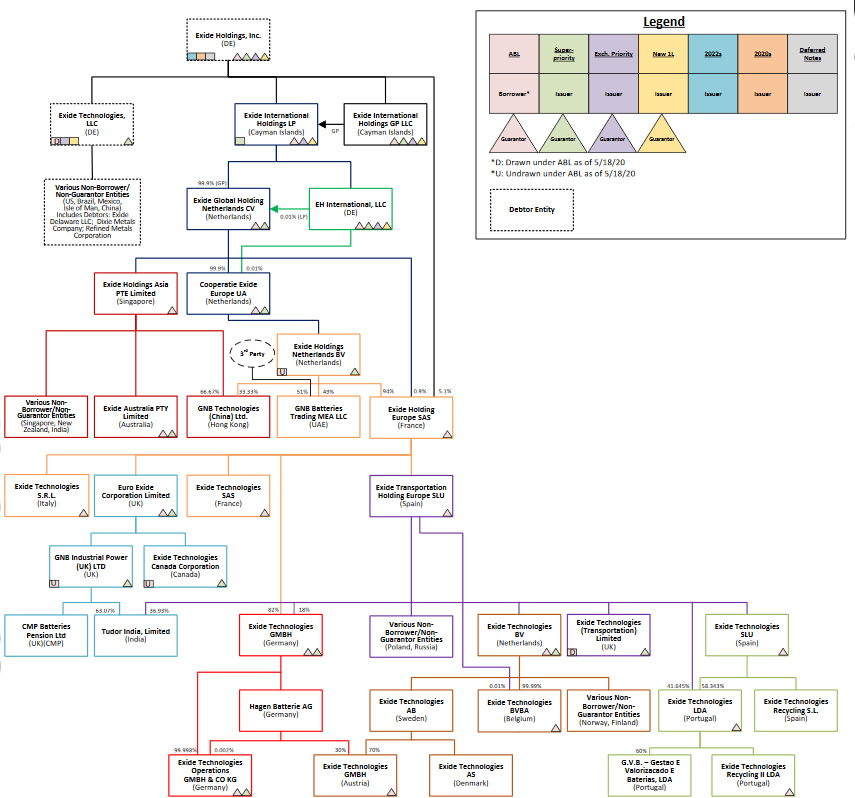