On January 11th, Ferrellgas Partners, L.P. (OTC: FGPRQ; “HoldCo”) and one affiliated Debtor, Ferrellgas Partners Finance Corp. (“Partners Finance,” and together with HoldCo, "the Debtors”) filed for Chapter 11 protection with the U.S. Bankruptcy Court in the District of Delaware, lead case number 21-10021 (Judge Walrath). At filling, the lead Debtor noted estimated assets between $100.0mn and $500.0mn; and estimated liabilities between $100.0mn and $500.0mn. On a consolidated basis, Ferrelgas's last pre-Petition 10-Q noted assets of $1.653bn and liabilities of $2.515bn.

The deadline to file administrative claims, including professional fee claims, has been set for May 14, 2021.

In a press release on the effectiveness, the Debtors heralded "the successful completion of its previously announced restructuring transactions that strengthen its balance sheet while allowing it to continue as an employee-owned enterprise."

The press release continued: "As previously announced, on December 10, 2020, Holdings entered into a Transaction Support Agreement ('TSA') with a majority of the holders of the Holdings unsecured notes that were due June 2020 (the 'Holdings Notes'). The TSA included a comprehensive restructuring plan at both the Holdings level to address the maturity of its notes and at Ferrellgas, L.P. ('OpCo'), the operating entity, to address over $2 billion in debt obligations. Based on the transactions consummated today, Holdings announces that OpCo has successfully (1) established a new $350 million senior secured revolving credit facility, (2) issued $1.475 billion in new senior unsecured notes due in 2026 and 2029, and (3) sold $700 million in senior preferred equity. The senior preferred equity financing was led by funds managed by the Private Equity Group and the Credit Group of Ares Management Corporation ('Ares'). The proceeds of these transactions have been used to satisfy, in full, OpCo's existing debt obligations. Further, as contemplated in the TSA, Holdings also announces that its plan of reorganization, by which the existing Holdings Notes are to be exchanged for new limited partnership units at Holdings, has gone effective and Holdings has successfully emerged from chapter 11 protection.

The restructuring transactions enable the nearly 100-year-old propane retailer, known for its leading tank exchange business, Blue Rhino, to continue to serve the propane needs of millions of Americans in all 50 states and Puerto Rico, during a pandemic year that was also heavily impacted by record-cold temperatures in many parts of the country."

The Debtors' memorandum of law in support of Plan confirmation (the "Memorandum") [Docket No. 170] provides: “In the months leading up to the June maturity of the 2020 Notes and through the commencements of the Chapter 11 Cases, the Debtors worked tirelessly to negotiate a value maximizing restructuring that would avoid the elimination of the equity in HoldCo – the Existing LP Units Interests – and be acceptable to holders of the 2020 Notes Claims whose claims would not be paid in full. The Plan is the result of months of good-faith, arms’-length negotiations between the Debtors and the holders of 2020 Notes Claims. Those negotiations resulted in the execution of the Transaction Support Agreement and the promulgation of the Plan.

Support for the Plan is overwhelming and unequivocal. The Plan has been accepted by both voting classes, including acceptance by over 95% of the unitholders that voted, and the Debtors have resolved all but three objections to the Plan. The Plan effectuates a pre-negotiated debt-for-equity swap to satisfy the 2020 Notes Claims and leaves existing equity holders with the same rights and interests that they had on Petition Date. The mechanics of the Plan are simple – holders of 2020 Notes Claims receive New Class B Units, which if not redeemed in the first five years after the Effective Date, will be converted into New Class A Units. Meanwhile, holders of Existing LP Units Interests, despite being ‘out of the money’ and, therefore, not entitled to any recovery, will retain the same interests that they currently have, which are renamed New Class A Units. Given the pre-petition maturity of the 2020 Notes, absent a consensual restructuring pursuant to the Plan, the holders of the 2020 Notes Claims could have foreclosed on the Debtors’ assets (as limited as they are) and eliminated the Existing LP Units Interests in their entirety ensuring no recovery—a result that management strenuously opposed in plan negotiations and is successfully avoided under the Plan.

The Disclosure Statement [Docket No. 123] adds: “The chapter 11 plan term sheet that is attached as Exhibit A to the Transaction Support Agreement (the ‘Transaction Term Sheet’) and contemplates a swift restructuring that is supported by the holders of approximately 75.84% in principal amount of the 2020 Notes Claims. Notably, the Plan leaves all Claims other than the 2020 Notes Claims, the Existing LP Units Interests, and the Other Existing Equity Interests unimpaired. The unimpaired claims include Secured Claims (if any), 2025 OpCo Secured Notes Guaranty Claims, other Priority Claims (if any), the Litigation Claims and General Unsecured Claims (if any). The Intercompany Claims will either be (a) Reinstated or (b) canceled and released subject to the consent rights set forth in the Transaction Support Agreement; provided, however that the OpCo Loan Claim shall be Reinstated and shall not be canceled and released. The Intercompany Interests will either be (a) reinstated or (b) canceled or released. Through this Plan treatment, the Debtors will minimize disruptions to the Enterprise’s go-forward operations while effectuating a value-maximizing refinancing transaction through the chapter 11 process. In addition, the Debtors’ existing common unitholders will receive or retain New Class A Units on account of the limited partnership interests such holders currently own.

Contemporaneously with the transactions to be effectuated through the Plan, OpCo will enter into its own financing transactions, which will be implemented outside of the Chapter 11 Cases. Specifically, OpCo will enter into new financing facilities including the issuance of new notes and a new revolving credit facility (the ‘New OpCo Facilities’). OpCo or HoldCo will also issue new preferred units (the “Senior Preferred,” together with the New OpCo Facilities, the ‘OpCo Transactions’). The proceeds of these transactions will be used to redeem the senior notes previously issued by OpCo and for other uses permitted under OpCo’s partnership agreement, the Transaction Support Agreement and the Transaction Term Sheet. The terms of the OpCo Transactions shall be subject to the consent of the Required Consenting Noteholders. OpCo may also consider other transactions to delever and address its current balance sheet. The consummation of the OpCo Transactions shall be a condition precedent for the transactions under the Plan. The Debtors elected to pursue a prepackaged Chapter 11 Plan process to minimize the costs and impact of an in-court restructuring on the Enterprise’s business. With a prepackaged Plan and key creditor support in place pursuant to the Transaction Support Agreement, the Debtors expect to emerge positioned to capitalize on their asset base as the Enterprise looks to continue its go-forward growth and operating plans to be competitive. Accordingly, the Transaction Support Agreement contains certain milestones, including (i) securing an order confirming the Plan no later than forty-five (45) calendar days after the Petition Date, and (ii) having the Effective Date occur no later April 4, 2021. The Debtors believe they can confirm the Plan and emerge from chapter 11 within these time periods without prejudicing the ability of any parties to assert their rights in the Chapter 11 Cases.”

The following is an updated summary of classes, claims, voting rights and expected recoveries (defined terms are as defined in the Plan and/or Disclosure Statement; See changes in bold; please see also the Liquidation Analysis below):

On February 26, 2021, the Debtors’ claims agent notified the Court of amended Plan voting results [Docket No. 166] which were as follows:

The Debtors' Disclosure Statement provided the following detail as to the events leading to Debtors' Chapter 11 filing: “While the Enterprise’s business as a whole remains operationally sound, it has experienced a number of unexpected challenges in recent years, including the inability of the Debtors to service the Debtors’ debt obligations due to, among other things, restrictions on OpCo’s ability to distribute funds to the Debtors. In addition, the Debtors faced liquidity issues that left them unable to repay or recapitalize the outstanding principal and interest under the 2020 Notes. Consequently, the Debtors negotiated with the Consenting Noteholders the terms of the Transaction Term Sheet, the Transaction Support Agreement, the Plan and the Restructuring Transactions (as defined in the Transaction Term Sheet). These transactions, when effectuated, are expected to leave the Enterprise’s business intact, de-lever the balance sheet of not only the Debtors but also OpCo and its subsidiaries, enhance long-term growth prospects and improve operational performance.

The Enterprise became over-leveraged in part due to the June 2015 acquisition of Bridger Logistics, LLC (‘Bridger’), which acquisition, in part, was financed by the OpCo Notes.

As the Enterprise was facing the upcoming maturity of the 2020 Notes, as well as significant pressure from its then existing lender, OpCo elected to issue the 2025 Notes to raise $700 million to, among other things, add cash to the balance sheet and pay off OpCo’s prior secured credit facility. The 2025 Notes are secured by substantially all of the assets of OpCo and its subsidiaries.

The Forbearance Agreement expired on August 15, 2020; however, negotiations continued between the Debtors and the Forbearing Noteholders. These discussions culminated in the execution of the Transaction Support Agreement and related Transaction Term Sheet on December 10, 2020.”

The Disclosure Statement Supplement [Docket No. 7] attached the following documents:

The Debtors filed Plan Supplements at Docket Nos. 125 and 169 which attached the following:

In a press release (also 8-K here) announcing the filing, the Debtors advised that: “Pursuant to the transactions contemplated in the Transaction Support Agreement (the "TSA" [attached to the Disclosure Statement at exhibit B]), which was entered into with a substantial majority of the noteholders of Parent MLP and Parent Finance, Parent MLP and Parent Finance’s debt will be eliminated; approximately $1.5 billion of Ferrellgas’ debt will be refinanced; and Ferrellgas, L.P. will raise over $1 billion of new capital.”

James E. Ferrell, Chairman of the Ferrellgas Board of Directors, commented further: “Today’s announcement is an important step forward in significantly strengthening our balance sheets and positioning our company for long-term success. We are pleased this process will enable Ferrellgas to remain an independent, employee-owned company as we continue growing our strong and profitable core business. We remain focused on serving our nearly 800,000 customers throughout the United States and Puerto Rico, and on continuing to expand our premier Blue Rhino tank exchange business.

We appreciate the continued support of our institutional noteholders, which will enable us to complete our financial restructuring on an expedited basis…We look forward to emerging a financially stronger company, and we are excited to build on our near 100-year-old history of innovation as one of the nation’s largest propane dealers for many years to come.”

The Debtors are party to the following: 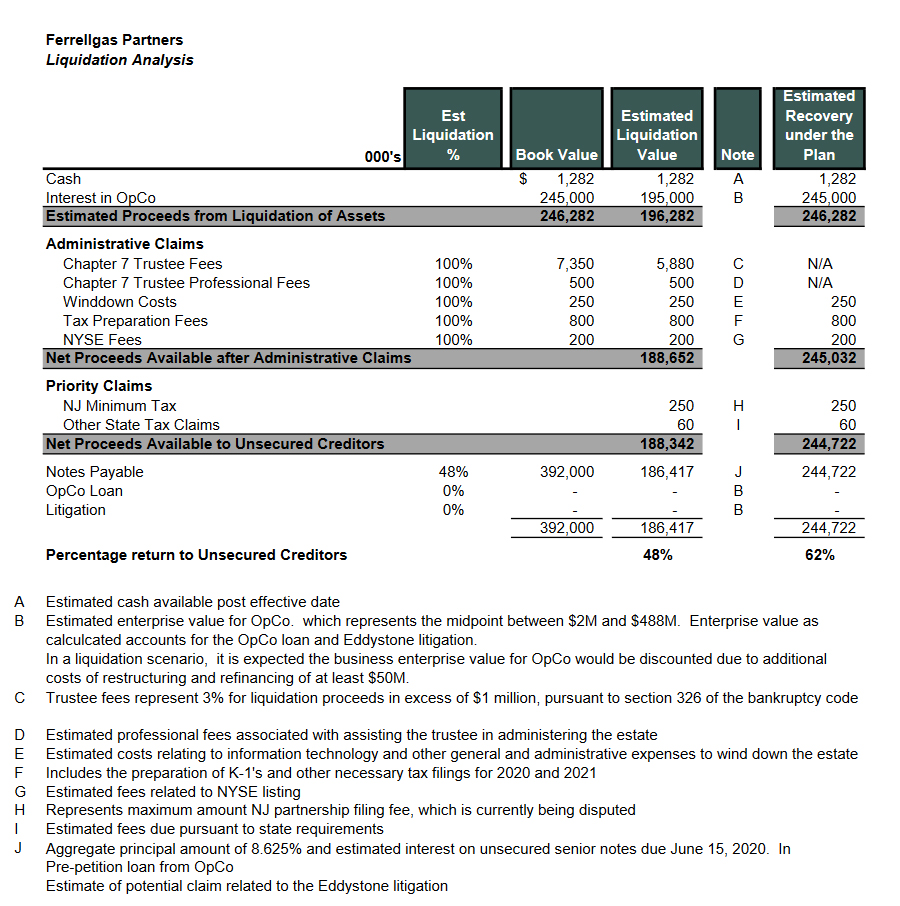 According to the Debtors: “Ferrellgas Partners, L.P., through its operating partnership, Ferrellgas, L.P., and subsidiaries, serves propane customers in all 50 states, the District of Columbia, and Puerto Rico. Ferrellgas employees indirectly own 22.8 million common units of the partnership, through an employee stock ownership plan. Ferrellgas Partners, L.P. filed a Form 10-K with the Securities and Exchange Commission on October 15, 2020. Investors can request a hard copy of this filing free of charge and obtain more information about the partnership online at www.ferrellgas.com.”

Debtor Partners Finance is a Delaware corporation formed in 1996 and has nominal assets, no employees and does not conduct any operations, but solely serves as co-issuer and co-obligor for the 2020 Notes. 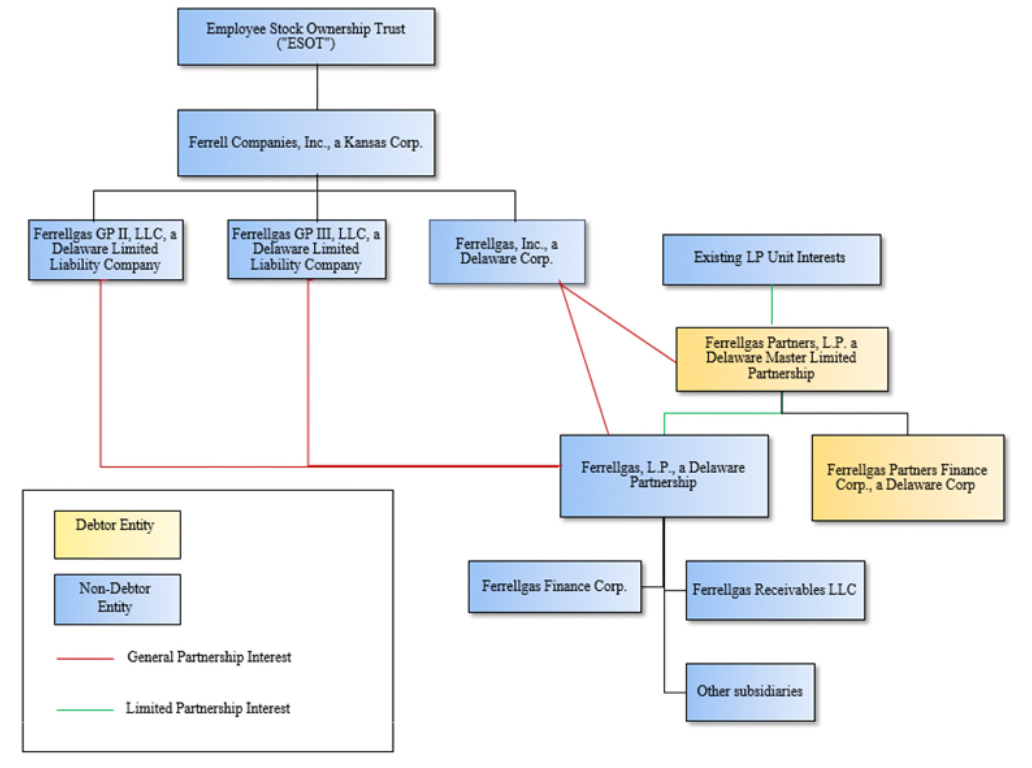