December 17, 2020 – The Court overseeing the FIC Restaurants, Inc. cases confirmed the Debtors' Second Amended Combined Plan of Liquidation and approved the adequacy of the accompanying Disclosure Statement on a final basis [Docket No. 278].

On October 30, 2020, FIC Restaurants, Inc. and four affiliated Debtors (dba Friendly's; “Friendlys” or the “Debtors”) filed for Chapter 11 protection with the U.S. Bankruptcy Court in the District of Delaware, lead case number 20-12807. At filing, the Debtors, operators of a chain of casual dining restaurants with a focus on ice cream, noted estimated assets between $10.0mn and $50.0mn; and estimated liabilities between $50.0mn and $100.0mn.

On December 16, 2020, the Debtors filed a Second Amended Combined Plan of Liquidation and Disclosure Statement [Docket No. 264].

The Debtors' Memorandum in Support of Plan Confirmation Docket No. 255] provides, “Since the Petition Date, the Debtors have engaged with parties-in-interest, including the U.S. Trustee, landlords, contract counterparties, vendors and other stakeholders in extensive and good-faith discussions in order to resolve various questions, concerns and issues with respect to the Plan, Plan Supplement and Confirmation Order. The Debtors have gone to great lengths to accommodate the comments and requests from all parties and has successfully resolved numerous of their issues and concerns, including, among other things, comments to the Plan and Confirmation Order, the Allowed amount and timing of payment of Rejection Claims and clarifications with respect to the rejection of various insurance agreements."

The Combined Document [Docket No. 264] reads: “The Plan represents the Debtors’ proposal in these Chapter 11 Cases for the sale of substantially all assets and liquidation of all or substantially all of their remaining assets pursuant to a (i) concurrent private sale process under section 363 of the Bankruptcy Code, with the closing contingent upon the Effective Date of the Plan; and (ii) a Plan process sponsored by the Plan Sponsor that, in conjunction with the proceeds from the private sale to the Purchaser, will leave all Classes of Claims Unimpaired, other than Secured Claims held by the Secured Lenders, which are non-Debtor affiliated entities (and include the Plan Sponsor), that are waived and released by express consent as substantial contributions to the Plan. The following provides a summary of the key economic terms and mechanics of the Plan:

On December 3, 2020, the Debtors filed a Plan Supplement, which attached the following [Docket No. 193]:

On December 14, 2020, the Debtors filed an amended Plan Supplement, which attaches the following [Docket No. 254]:

On December 16, 2020, the Debtors filed a Second amended Plan Supplement, which attaches the following exhibit [Docket No. 263]:

The Disclosure Statement provides: “The Debtors in recent years encountered many of the same performance issues faced by fast-casual dining sector as a whole, including substantial headwinds caused by shifting demographics, increased competition and rising costs. The business, which consistently lost money, relied on borrowings under the Credit Facilities as the only way to sustain operations. The Debtors recognized that there was an urgent need to stem cash burn and restore the beloved Friendly’s Restaurant brand to profitability, especially as availability of continued credit was not guaranteed.

First commenced several years ago, the Debtors implemented restructuring initiatives focused on closing unprofitable locations, reducing occupancy and other fixed costs and improving the business at the remaining restaurants by delivering menu innovation, re-energized marketing, and a better overall experience for customers.

… it soon became apparent to the Debtors and their advisors that a sale of the business was the only long-term viable path forward to preserve the Friendly’s Restaurant brand, save jobs, protect franchisees, and mitigate the negative impact of the Debtors’ distressed financial condition on creditors. And the Debtors’ decision to pursue a strategic restructuring in the form of a sale was only affirmed when, like many restaurant businesses, the Debtors’ incremental progress was sharply interrupted, or better stated halted, by the catastrophic impact of COVID-19 that has caused a dramatic decline in revenue due to the need to close dine-in operations for several months at all franchise and corporate-owned locations.”

The Disclosure Statement provides: "On November 26, 2019, the Debtors’ investment banker, Duff & Phelps Securities, LLP ('Duff & Phelps'), kicked off a marketing process by sending out one- page “teasers” to 40 potential strategic buyers and 76 potential financial buyers. This initial outreach resulted in non-disclosure agreements being entered with 11 strategic buyers and 22 financial buyers for these parties to gain access to additional information regarding the Debtors’ business.

The 2019 marketing process carried over to 2020 when, on January 22, 2020, Duff & Phelps received five initial indications of interest. In February and March 2020, Duff & Phelps coordinated meetings between the Debtors’ management and the remaining pool of potential buyers, and also provided these parties with access to a virtual data room. Duff & Phelps, however, briefly paused the marketing process as COVID-19 began to spread rapidly and the Debtors’ restaurants were forced to close and shelter-in-place orders were issued. When discussions resumed only one of the parties, Brix Holdings, LLC (which was later designated the Purchaser as the buyer of the Debtors’ assets), submitted a letter of intent for the purchase of the Debtors’ assets subject to a bankruptcy filing of the sellers and approval of the transaction on a free and clear basis pursuant to section 363 of the Bankruptcy Code.

While the purchase price is not substantial*, the Sale if approved in these Chapter 11 Cases allows the business to continue, the Friendly’s Restaurants brand and thousands of jobs across the corporate-owned and franchised locations to be saved, the franchisees to be protected and served, and the overall claims pool to be dramatically reduced by virtue of the Purchaser’s assumption of numerous key contracts and the overwhelming majority of the restaurant leases.

*The asset purchase agreement filed at docket No. 19 provides: "the payment of an amount in cash (the 'Cash Payment') equal to (A) $1,987,500 ('Base Purchase Price'), plus (B) the Closing Inventory, plus(C) the Closing Restaurant Cash, plus (D) Closing Prepaid Expenses, plus (E) Closing Security Deposits, less (F) the amount by which Closing Unredeemed Gift Cards exceeds $1,263,000, if any, less (G) the Closing Restaurant Deferred Rent, less (H) the Bloomfield Rent Adjustment (if applicable), less (I) the Coke Prebate; and(ii)the assumption by Buyer of the Assumed Liabilities."

As of the Petition date, the Debtors’ capital structure consists of outstanding funded-debt obligations in the aggregate amount of approximately $87.88mn, and unsecured trade indebtedness of $1.08mn.

According to the Debtors: “Founded in 1935 as a single ice cream shop in Springfield, Massachusetts, the Debtors grew to a chain of casual dining restaurants that is widely regarded as an authentic, yet affordable, dining experience, with a broad menu offering and hallmark ice cream dessert selection catering to all family members. In its 85-year history, the iconic Friendly’s Restaurants brand name became associated with high quality food, customer service, good times and great memories. 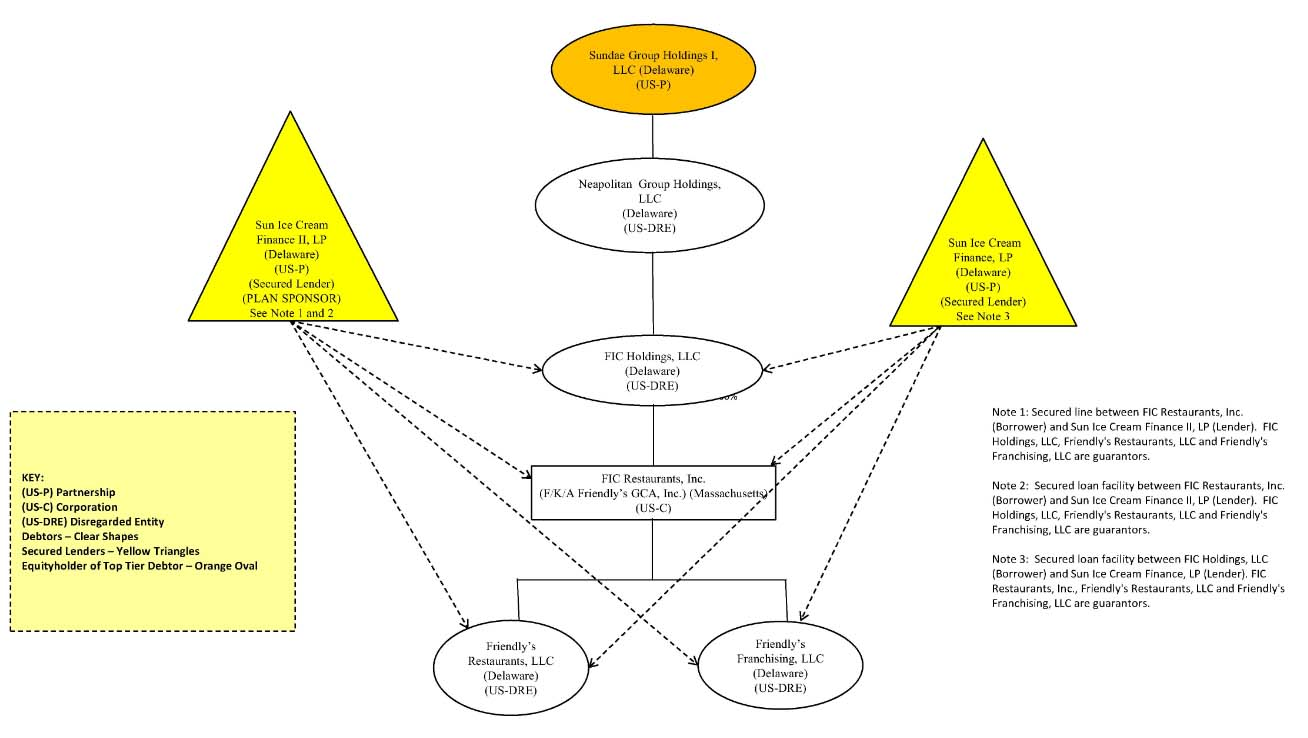