June 28, 2022 – The Court hearing the Flexible Funding cases confirmed the Debtors’ Amended Plan of Liquidation, with the confirmation order subsequently issued on July 13th at Docket No. 435. The delay in the order reflects a late resolution of an objection filed by Medalist Partners Opportunity Master Fund II-A, L.P. ("Medalist") [Dkt. No. 420]. Medalist is the sole member Class 4 holding the Class 4 Subordinated Secured Claim and had voted against the Plan. Medalist and the Debtors eventually reached an agreement resolving the objection as set forth in Paragraph 2 of the confirmation order (see further below), With the agreement, the objection is deemed withdrawn by Medalist which has now voted in favor of the Plan.

On September 19, 2021, Flexible Funding, Ltd. Liability Co. and one affiliated debtor (“Flexible Funding” or the “Debtors”) filed for Chapter 11 protection with the U.S. Bankruptcy Court in the Northern District of Texas, lead case number 21-42215 (Judge Mullin). At filing, the Debtors, a Texas-based "staffing" lender which describes itself as the "go-to payroll-financing choice for staffing agencies-from startups to established companies with over $1,000,000 per week in sales," noted estimated assets between $100.0mn and $500.0mn; and estimated liabilities between $100.0mn and $500.0mn. In a subsequently filed Schedule A/B, the lead Debtor noted $105.7mn of assets and $109.2mn of liabilities [Docket No. 185].

As detailed further in "Asset Sales," below, the central feature of these cases was the sale of substantially all of the Debtors' assets in a pair of sales involving the same purchaser, eCapital Corp., with those sales closing in November 2021. The proceeds from the sales allowed the Debtors to retire the senior secured indebtedness owed to Umpqua Bank in full. The remaining sale proceeds provide the primary source of funding for Distributions under the Plan.

The Disclosure Statement [Docket No. 383] states, “…the Plan proposes a simple liquidation of the Debtors’ assets and distribution of Cash to the holders of Allowed Claims…

Both before and after the commencement of these chapter 11 cases, the Debtors engaged in good-faith and arm’s-length negotiations for the sale of their assets. On October 15, 2021, the Bankruptcy Court entered an order approving notice and bidding procedures for a potential sale of substantially all the assets of Flexible. [Dkt. No. 110] On October 18, 2021, the Bankruptcy Court entered a similar order with respect to Instapay. [Dkt. No. 120] Ultimately, the highest and best offers for the Debtors’ assets were received from affiliates of eCapital Corp. In November 2021, transactions were closed for the sale of substantially all of the Debtors’ assets. The proceeds from the sales allowed the Debtors to retire the senior secured indebtedness owed to Umpqua Bank in full. The remaining sale proceeds provide the primary source of funding for Distributions under the Plan.”

On June 28, 2022, the Debtors' claims agent notified the Court of amended Plan voting results [Docket No. 428], which were as follows:

On November 9, 2021, further to its October 15th bidding procedures order [Docket No. 110] and an auction conducted on November 5th, the Court hearing the Flexible Funding cases issued an order approving the sale of the Debtors’ Flexible Funding assets (the “Sale” and the “Flexible Funding Assets,” respectively) to eCapital Factoring (Holding) Corp (“eCapital”) [Docket No. 198]. The eCapital APA, governing what the Debtors estimate is a $51.4mn sale, is attached to the sale order as Exhibit A. The Court order also approved Encore Funding II, LLC as the back-up bidder.

In a press release announcing the sale, eCapital stated, "eCapital Corp. ('eCapital' or 'the Company'), a leading capital solutions provider for small and medium-sized businesses in North America and the United Kingdom, today announced that they have acquired the assets of Flexible Funding, a payroll funding company for staffing agencies across multiple industries, along with its freight factoring subsidiary, InstaPay."

eCapital CEO Marius Silvasan commented, "The acquisitions of Flexible Funding and InstaPay supports our commitment to providing industry-leading financing solutions to staffing and transportation businesses. Establishing a foothold in Dallas/Fort Worth will allow us to better serve our clients in the region and ensure we are well-positioned for further growth."

eCapital said it "plans to keep a presence in Fort Worth, including Flexible Funding and InstaPay staff to support the existing client base."

This is the 10th acquisition for eCapital in the last four years.

On October 15, 2021, the Debtors filed an amended bidding procedures motion for the sale of InstaPay Assets [Docket No. 107]. The amended motion was filed to substitute eCapital Freight Factoring Corp. (“eCapital”) as the Stalking Horse Bidder. The sale to eCapital Freight Factoring was approved on November 2, 2021 [Docket No. 167], with Encore Funding II, LLC designated as the back-up bidder.

According to the APA attached to the sale order as Exhibit A, the purchase price for the InstaPay assets will be comprised of (a) the aggregate of the (i) net funds employed with respect to approved A/R Assets and (ii) the outstanding principal amount of approved ABL Assets as per the "Data Tapes" generated by the seller's factoring software, less any bad debts, less any term loans and less any special reserves, in each case as of the closing date (the "Client Portfolio Amount") plus (be) the Premium (an amount equal to 15% of the Client Portfolio Amount).

In a motion requesting authority to access cash collateral [Docket No. 5], the Debtors note that they "operate as asset-based lenders and factors for approximately 400 active borrower accounts, primarily in the staffing and transportation industries" with these accounts comprising "a total portfolio of about $110 million in loans and factored receivables." The Debtors claimed to have an equity cushion, noting: "the Debtors estimate that the total of their secured obligations to the Lenders as of the Petition Date is approximately $95,904,000, and that the amount recoverable on their loan portfolio is approximately $108,774,813. The Debtors anticipate that their loan portfolio will retain is value during the bankruptcy case through continued operations."

The Debtors, who otherwise claim longstanding San Francisco ties on their website, moved their business to Fort Worth four weeks before the Petition date, noting at the time that "We are thrilled to announce our relocation of our corporate headquarters to Fort Worth to support our growth and the dynamic needs of our entire business…Flexible Funding is also expanding their team, with the recent hire of Steve Sala as CFO and Doug Gregory as CCO. The expansion of their team and of offices in the US market puts Flexible Funding in a position to continue its fast-paced growth while continuing to provide best-in-class solutions to their clients." 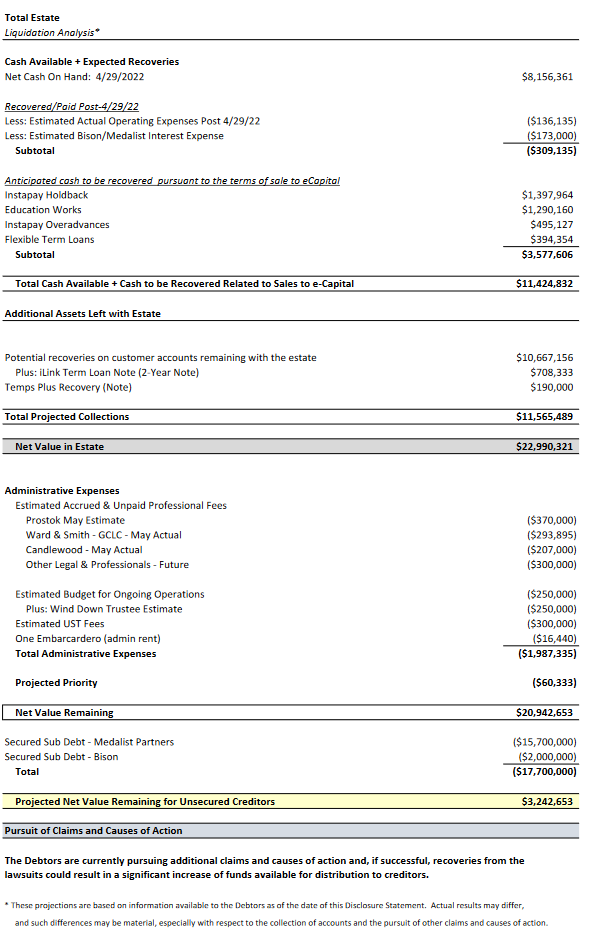 According to the Debtors: “Flexible Funding has been providing payroll funding for staffing agencies nationally since 1992.  Over the past 5 years, Flexible expanded its portfolio into other areas of the industry, including oil & gas, transportation, manufacturing and distribution. Flexible Funding has partnered with a broad range of companies, from startups, to established companies with over $1,000,000 per week in sales. Flexible Funding was ‘Fintech’ long before the term was coined, and is proud of its technological development in delivering superior collateral management in a fraction of the time it takes traditional Asset Based Lenders.”