The Debtors are 100% owned by affiliates of The Blackstone Group Inc. which purchased the Debtors as part of a trio of gas-fired power plants (the other two at Bastrop and Paris, Texas) from Direct Energy (part ot the UK's Centrica) for $685.0mn in December 2013 in a bet that then historically low electricity prices would bounce back. Centrica reportedly paid a combined $331.0mn for the properties in a pair of 2004 and 2006 transactions.

In 2016, the Debtors' plant began exporting its energy output to Mexico.

In a press release announcing the filing, Frontera advised that: “it has entered into a Restructuring Support Agreement (RSA [attached to Docket No. 20, at Exhibit B]) with approximately 97 percent of its term loan lenders, 100 percent of its noteholders…along with the 100 percent equity holder Lonestar Generation LLC, on the terms of a comprehensive financial restructuring. Currently, Frontera has $773 million in debt under a secured term loan and revolving credit facility, as well as $171 million in secured notes. Under this agreement, lenders agree to convert a substantial portion of the current term loan and revolving credit facility debt into equity. Assuming approval by the Bankruptcy Court, these lenders will become the new owners of the Frontera Energy Center.

The Company's subsidiary entities in Mexico are not included in the chapter 11 filing and also are continuing to operate in the ordinary course of business.”

Frontera CEO Lee Davis added: "Frontera intends to use the court-supervised process to create a sustainable capital structure and position the Company to achieve long-term success."

The Debtors have entered into a February 3, 2021 restructuring support agreement (the "RSA," attached to Docket No. 20 at Exhibit B) with HoldCo Noteholders,  the Ad Hoc Group of Term Loan Lenders and Lonestar Generation (ie Blackstone) that "contemplates a comprehensive and highly-consensual restructuring transaction that will be implemented through a pre-arranged plan of reorganization…resulting in a substantial deleveraging and an immediate infusion of new capital to fund the Debtors’ operations and emergence from chapter 11. Certain lenders under the Debtors’ OpCo Loans have agreed to backstop a $70 million new money DIP term loan facility (the 'DIP Facility') to fund these chapter 11 cases, which will roll into a new first lien term loan exit facility upon emergence. Pursuant to the Restructuring Support Agreement, the DIP Facility will receive an equity-based fee upon emergence, in the amount of 87.5% of the equity of reorganized Frontera. Holders of OpCo Claims will receive their pro rata share of the remaining 12.5% of equity of reorganized Frontera and $75 million in new second lien take-back debt. Holders of the HoldCo Note Claims will receive their pro rata share of $7.5 million of cash and a warrant package. Lonestar Generation has agreed to fund the $7.5 million cash payment to holders of HoldCo Note Claims in connection with, and contingent upon, the consummation of the restructuring transactions and approval of the releases contemplated by the Restructuring Support Agreement. Importantly, general unsecured claims will be paid in full in the ordinary course of business and will be unimpaired, and any other priority or secured claims will be paid in full in cash upon emergence. Pursuant to the Restructuring Support Agreement, these transactions are supported by holders of approximately 92% of the OpCo Loans, 100% of the HoldCo Notes, Morgan Stanley, as OpCo Term Loan Agent and L/C Agent, Lonestar Generation, Kindle Energy, and Fisterra Energy."

Milestones in the RSA include the filing of a Plan by February 17th and Confirmation by April 28th.

Frontera has secured $70.0mn in new money debtor-in-possession (DIP) financing from certain of their term loan lenders with $30.0mn of that financing to be available with an interim DIP order. The Debtors' "liquidity position will allow the plant to operate the business in the ordinary course and fund chapter 11 administrative costs." The $70.0mn DIP facility will convert into a new first lien term loan exit facility (the "New First Lien Term Loan"). The $145.0mn of exit financing also includes a new $75.0mn second lien take-back term loan facility (the “New Second Lien Term Loan Facility”), which shall be junior in priority to the New First Lien Term Loan and shall be distributed to holders of prepetition first lien claims.

As of the Petition date, the Debtors have approximately $944.0mn in aggregate funded debt obligations, all of which is secured debt.

In a declaration in support of the Chapter 11 filing (the “Meleski Declaration”), Brant Meleski, the Debtors’ Vice President, detailed the events leading to Frontera's Chapter 11 filing. The Meleski Declaration provides: “… for Frontera—the owner and operator of the only U.S.-based power plant that sells all of its power to Mexico—to say COVID-19 is the band leader in a parade of horribles would be a gross understatement. Demand for electricity began to fall from the sky in March 2020, further accelerating through the summer and fall, exactly when demand and profitability historically peak. The numbers do not lie: year-over-year peak pricing was down nearly 70% through September 2020, resulting in lower energy revenues by more than 60% as compared to 2019. To add insult to injury, it is unclear if and when this will all be over and peak demand will return to pre-pandemic levels. Sprinkle on top various macroeconomic factors, including:

What was manageable pre-pandemic suddenly became unmanageable. The sudden and profound impact on liquidity necessitated action and a complete realignment of the capital structure, including a significant reduction of approximately $944 million in indebtedness."

The Meleski Declaration continues: "the COVID-19 pandemic disrupted Mexican manufacturing and commercial operations, which drastically reduced demand for electricity beginning in March 2020 and continuing throughout the summer and fall, precisely when demand and profitability has historically peaked. Year-over-year peak pricing was down nearly 70% through September 2020,resulting in 61.9% lower energy revenue in 2020 than 2019. It is unclear if and when peak demand will return to pre-pandemic levels.

Meanwhile, natural gas prices in the U.S. have not fallen as significantly as power prices in Northeastern Mexico. As a result, Frontera has experienced significantly compressed realized spark spreads relative to prior years, straining its liquidity and working capital. Spark spreads were further reduced in the first half of 2020 in part due to plummeting oil prices. As a result, oil-fired generation has become a much closer competitor to natural-gas fired generation. Also, Frontera expects to see an influx of additional solar installations over the coming years, resulting in an additional five gigawatts of solar supplied power over the next four years. This additional capacity will continue to exert downward pricing pressure on the electricity market in which Frontera participates. Finally, Frontera anticipates that it will need to replace a critical rotor in the Frontera Facility in the fall of 2021, straining forecasted liquidity as a result of a three week projected outage to facilitate the replacement."

According to the Debtors: “Frontera Holdings operates a 526 MW combined cycle natural gas plant near Mission, Texas, and exports power to Mexico."

The Meleski Declaration adds: "Frontera’s 526 megawatt natural-gas-fueledpower generation facility is located approximately 1.8 miles from the U.S.-Mexico border in Mission, Texas and has a position in the Mexican wholesale electricity market (the Mercado Eléctrico Mayorista, or the 'MEM') as a baseload generator. The Frontera Facility benefits from access to natural gas at lower prices relative to peer power generation facilities in Northeast Mexico, plant operational efficiencies, and its strategic location." 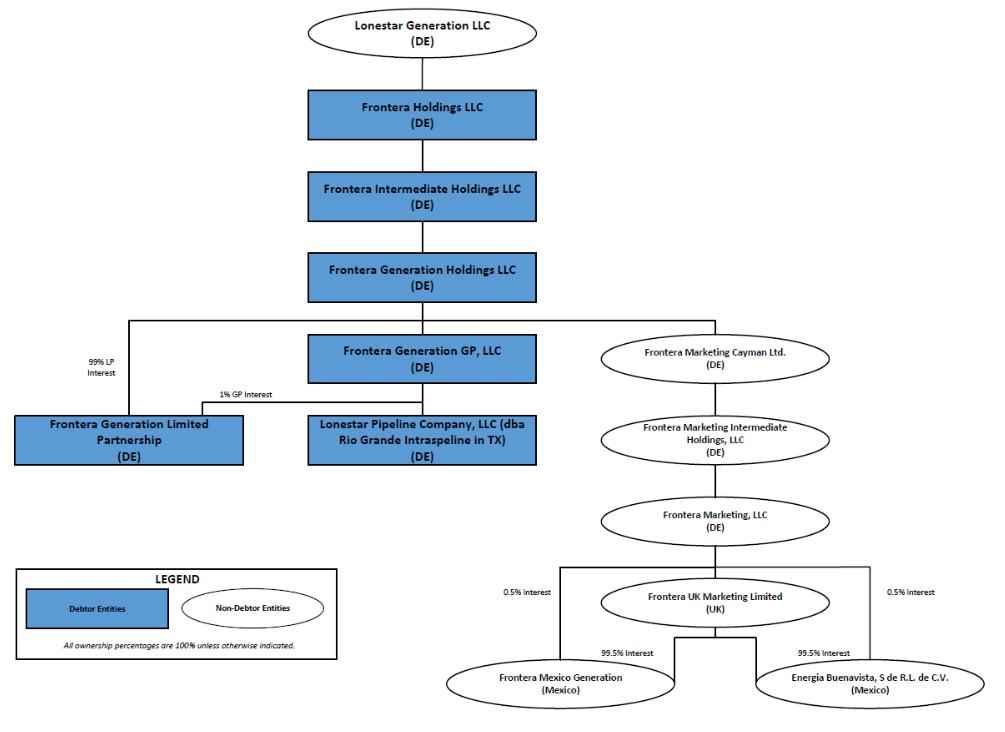