April 14, 2020 – Frontier Communications Corporation and more than 100 affiliated Debtors (Nasdaq: FTR, “Frontier” or the “Debtors”) filed for Chapter 11 protection with the U.S. Bankruptcy Court in the Southern District of New York, lead case number 20-22476. The Debtors, a provider of communications services in the United States, are represented by Stephen E. Hessler of Kirkland & Ellis. Further board-authorized engagements include (i) Evercore as financial advisors, (ii) FTI Consulting, Inc. as restructuring advisors, (iii) KPMG LLP as auditors and tax consultants and (iv) Prime Clerk as claims agent.

As discussed further below, the Debtors atributed their need to seek bankruptcy protection to (i) massive debt incurred in three acquisitions that failed to deliver as hoped, (ii) an under-investment in fiber by the Debtors whose networks are still largely copper, in part due to liquidity constraints brought about by that debt and (iii) intense competition in a highly regulated (for them at least) environment. The timing of the filings (the lead Petition date-stamped 22:35) was driven by the April 15th maturity of the Debtors' $172.0mn 8.5% Unsecured Notes.

In a press release announcing the filing, the Debtors advised that frontier had “entered into a Restructuring Support Agreement ('RSA') with bondholders representing more than 75% of Frontier’s approximately $11 billion in outstanding unsecured bonds (the “Bondholders”). The RSA contemplates agreed-upon terms for a pre-arranged financial restructuring plan (the 'Plan') that leaves unimpaired all general unsecured creditors and holders of secured and subsidiary debt. Under the RSA, the Bondholders have, subject to certain terms and conditions, agreed to support implementation of a Plan that is expected to reduce the Company’s debt by more than $10 billion and provide significant financial flexibility to support continued investment in its long-term growth.

The Company has sufficient liquidity to meet its ongoing obligations. Under the RSA, trade vendors will be unimpaired for both pre- and post-petition obligations.”

The Adrianopoli Declaration (defined below and which attaches the Restructuring Term Sheet) provides: "The Debtors’ proposed restructuring, if successfully implemented, would result in a substantial deleveraging of the Debtors’ balance sheet by over $10 billion and contemplates the following key terms:

The Debtors have announced commitments for $460.0mn of debtor-in-possession (“DIP”) financing, which, when combined with $700.0mn of cash on hand, leaves them with $1.1bn of liquidity which is expected tobe "available and sufficient to meet Frontier’s operational and restructuring needs." As agreed, the DIP financing agreement provides for the additional financing to convert to a revolving exit facility upon emergence. Goldman Sachs Bank USA (“Goldman”) will act as administrative agent and lead arranger for the DIP Facility.

The Debtors and COVID-19

The Debtors emphasize two elements of the COVID-19 pandemic that will impact the Debtors during their Chapter 11 cases and beyond: (i) potential relief under the CARES Act and (ii) in a not-unrelated reminder to the source of CARES Act funding, its important role of as a provider of network services and critical communications services during the pandemic. The debtors state: “Specific government initiatives, such as the Coronavirus Aid, Relief, and Economic Security Act (‘CARES Act’), provide potential relief for the Debtors’ customers and businesses. Relatedly, Frontier understands the importance of its network services during these times…”

In a declaration in support of the Chapter 11 filing (the “Adrianopoli Declaration”), Carlin Adrianopoli, the Debtors' freshly appointed Executive Vice President of Strategic Planning (formerly a Senior Managing Director of FTI now moving from a restructuring advisory role with the Debtors to the in-house position), detailed the events leading to Frontier’s Chapter 11 filing. The culprits are now somewhat familiar: massive debt incurred in three acquisitions that failed to deliver as hoped; an under-investment in fiber by the Debtors whose networks are still largely copper, in part due to liquidity constraints brought about by that debt; and intense competition.

The Adrianopoli Declaration divides the underlying roots of the Debtors’ need to file chapter 11 into two areas: (i) growth transactions overleveraging the capital structure and ensuing implementation/operational issues and (ii) industry-specific challenges.

Growth Transactions. “By 2009, the Debtors were the primary landline telecommunications provider in many rural areas, serving as the ILEC provider to 1.39 million customers….Around this time, industry competitors expressed interest in exiting landline communications. Seizing on the opportunity to expand its ILEC operations, the Debtors embarked on a series of three acquisitions, the Growth Transactions, that transformed the Debtors from a regional provider of telephone and DSL internet to a national provider of these services.” Those three transactions were (i) the 2010 Verizon transaction, financed with approximately $5.2 billion of common stock plus the assumption of approximately $3.2 billion principal amount of unsecured notes, (ii) the 2014 AT&T transaction further to which the Debtors paid $2.0 billion in cash (raised through more than $1.6bn of debt issuances) and (iii) the $10.54bn 2016 “CTF” transaction (CTF standing for California, Texas, and Florida) with Verizon further to which it acquired Verizon’s wireline operations that provide services to residential, commercial, and wholesale customers in those states.The Debtors financed the CTF Transaction through a mix of debt and equity issuances: a private debt offering of $6.6 billion of CTF Notes, a $1.5 billion senior secured delayed-draw term loan facility, and a registered offering of $2.75 billion of preferred and common stock.

Operational Issues After Expansion. The Adrianopoli Declaration continues: “While the Growth Transactions transformed the Debtors’ businesses, there were integration issues associated with such expansion. The Debtors received public complaints from customers about the pace and progress of the integration. As a result, the Debtors began to face a high rate of customer loss. In turn, to refocus resources on servicing legacy customers, the Debtors limited their marketing efforts, resulting in low customer growth in the new regions that were acquired in the Growth Transactions.

Needed Infrastructure Updates Due to Constrained Capital Structure.  Again, the Adrianopoli Declaration: “The telecommunications industry is undergoing significant changes in technology and consumer uses, preferences, and expectations. Wireless growth has been exponential and customers have 'cut the cord' to the Debtors’ services. These customers have no tethered voice service and may use wireless service for internet access. Even within the 'wireline' sector, the introduction of fiber-optics has allowed new entrants and existing competitors with access to capital to introduce networks in the Debtors’ markets that are competitive with or superior to the Debtors’ existing copper-based networks. Although expensive to deploy, fiber-based networks can provide faster broadband speeds and have a longer useful life compared to copper-based networks. Customer expectations and requirements have shifted because of the positive effect of these differences on broadband speeds, bandwidth, capacity, and performance.

The Debtors require a technology upgrade to their infrastructure, principally by enhancing their fiber-based footprint, which requires significant investment and capital expenditures.

Competition and Shifting Industry Preferences. “Competition within the telecommunications industry is intense. Technological advances as well as regulatory and legislative changes have enabled a wide range of historically non-traditional communications service providers to compete with traditional providers, including the Debtors. The Debtors have experienced substantial, and in some cases complete, revenue attrition of intercarrier compensation (the charges other telecommunications pay to terminate traffic on the Debtors’ network) at the federal level and are still rate regulated by some state PUCs. In certain jurisdictions, the Debtors are subject to significant state and federal regulations, including, but not limited to, service quality performance standards that measure the Debtors on installation and repair intervals, customer service metrics, and outage frequency and duration, and carrier of last resort obligations, where the Debtors must bring landline facilities to anyone requesting voice service regardless of complexity or cost. Wireless, VOIP, and cable competitors are not subject to these same regulations and, as a result, have lower cost structures. The industry has also experienced substantial consolidation in recent years. Certain of the Debtors’ competitors are larger and have more service offerings due to greater financial resources to invest in such technologies. All of these factors create downward pressure on the demand for and pricing of the Debtors’ services. The Debtors primarily compete with:

Additionally, the importance of reliable broadband and demand for faster broadband speeds is increasing. The FCC changed its definition of what constitutes advanced broadband capabilities for certain purposes to 25 megabits per second (Mbps) download and 3 Mbps upload (25/3) from the standard of 4 Mbps download and 1 Mbps upload (4/1) set in 2010. Additionally, the percentage of total fixed connections in the US with a download speed of at least 25 Mbps has grown from 44 percent in 2014, to nearly 70 percent as of Dec 2017. This trend emphasizes that the Debtors need to update their infrastructure from their current predominantly copper-based networks to better compete in the industry.

Coupled with these challenges, shifting consumer preferences away from traditional landline telephone and television services have impacted the Debtors’ bottom line. As customers resort to voice and video 'cord cutting,' the Debtors have seen a decrease in both their voice and video subscription services. In the last 20 years, wireline ILECs’ share of the voice market has declined from greater than 60 percent to less than 10 percent nationwide, driven by losses to wireless, CLEC and cable competitors. During this same period, wireless connections increased by more than 250 percent from under 100 million to more than 348 million connections.

Further, near-ubiquitous 4G wireless coverage has made wireless-only phone service a much more viable option for consumers than it has been historically. With upgrades to 5G service, wireless operators will increasingly compete for broadband customers." 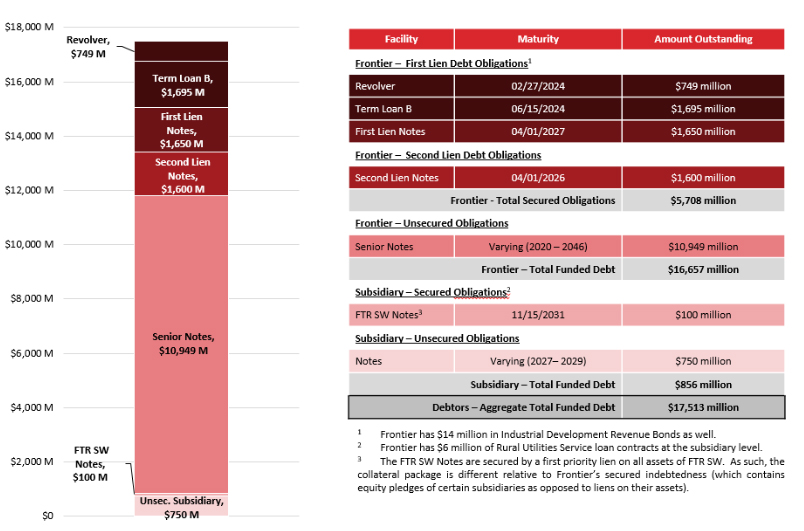 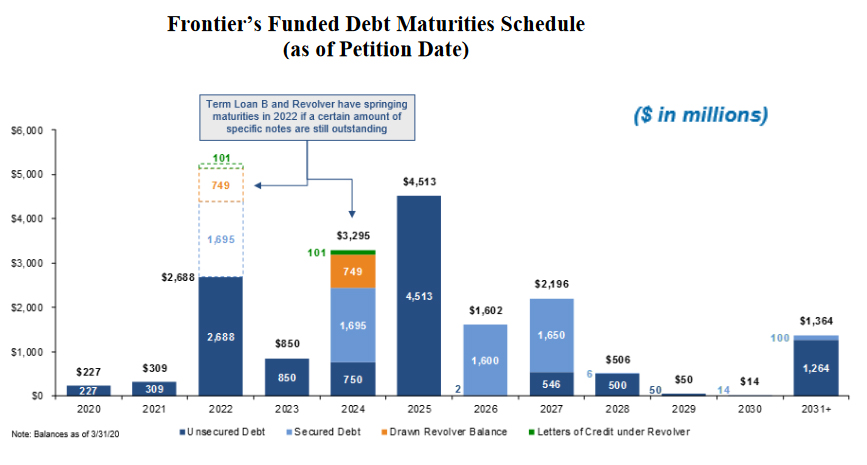 According to the Debtors: "Frontier Communications Corporation (NASDAQ:FTR) offers a variety of services to residential and business customers over its fiber-optic and copper networks in 29 states, including video, high-speed internet, advanced voice, and Frontier Secure® digital protection solutions. Frontier Business Edge™ offers communications solutions to small, medium, and enterprise businesses.