May 15, 2020 – Privately-held Gavilan Resources LLC and three affiliated Debtors (“Gavilan” or the “Debtors”) filed for Chapter 11 protection with the U.S. Bankruptcy Court in the Souhern District of Texas, lead case number 20-32656. The Debtors, who acquire, develop, and produce oil and natural gas assets in the Eagle Ford shale play in south Texas, are represented by Alfredo R. Pérez of Weil Gotshal & Manges LLP. Further board-authorized engagements include (i) Vinson & Elkins, LLP as general bankruptcy counsel, (ii) Huron Consulting Services LLC as restructuring advisors, (iii) Lazard Frères & Co. LLC as investment banker and (iv) Epiq Restructuring as claims agent. Both Weil Gotshal and Vinson & Elkins have represented Gavilan in the Sanchez bankruptcy since its commencement in August 2019.

The Debtors were formed in early 2017 by funds managed by Blackstone Energy Partners L.P. (‘Blackstone’).

As have done many peer companies who have already filed for bankruptcy protection, the Debtors cite declining commodity prices as placing them on a slippery slope and COVID-19 for shoving them to the bottom. For these, Debtors, however, there is a third critical concern which has dogged them before their bankruptcy and threatens to become the most important distraction while in it: A difficult and litigious relationship with Sanchez Energy Corporation; “Sanchez” itself in Chapter 11. Sanchez's Plan was confirmed on April 30th and its effectiveness wouuld critically damage these Debtors by allowing Sanchez to reject/modify agreements relating to a large joint project in the Eagle Ford Shale (the "Comanche Assets").

As the Roberts Declaration states: "The right to operatorship of the Comanche Assets is a valuable asset of the Debtors’ estates and Gavilan intends to vigorously pursue those rights as part of its own sales and restructuring efforts. In fact, the timing of this filing was made sufficiently in advance of the continued hearings on the Operatorship Dispute so as not to jeopardize the trial dates and to protect Gavilan from any potential efforts by Sanchez to further delay the resolution of this matter."

The relationship between the Debtors and Sanchez is governed by a series of joint operating, management and development agreements; additionally both are party to a pair of gathering agreements (one for gas and one for gas PLUS natural gas liquids) with Springfield Pipeline LLC (“Springfield”). Although this may be a 50/50 partnership, Sanchez clearly has a greater responsibility for (and control of) the operational aspects of the project; with Sanchez now operating the Comanche Assets (wrongly argue these Debtors) and perhaps more importantly controlling the oil output and revenue streams. These arrangements have Sanchez collect payment for O&G sales and then (in theory) remit the Debtors' share to the Debtors. In its own Chapter 11, Sanchez is looking to have several of these interlocking agreements altered or rejected to the detriment of Gavilan. The key Gavilan/Sanchez agreements include:

In a declaration in support of the Chapter 11 filing (the “Roberts Declaration”), David E. Roberts, Jr., the Debtors' Chief Executive Officer, detailed the events leading to Gavilan’s Chapter 11 filing. the roberts Declaration states: "The precipitous decline in oil prices from the combined effect of the COVID-19 pandemic and the flooding of oil markets by warring international producers forced Gavilan into these chapter 11 proceedings. Since the fall of 2018, however, Gavilan has been entangled in, first, an increasingly unworkable relationship with Sanchez brought on by, among other things, Sanchez’s own financial difficulties; second, arbitration (and litigation) stemming from Sanchez’s defaults under the JDA (the ‘Operatorship Dispute’); and, ultimately, Sanchez’s own chapter 11 cases filed in August 2019.

Gavilan enters these chapter 11 proceedings with a plan to market its business and assets while continuing its pursuit of operatorship of the Comanche Assets via the Operatorship Dispute.

Gavilan, Sanchez, and UnSub are parties to the JDA. Sanchez was in Default, for two independent reasons, under the JDA for months – before Sanchez filed its own chapter 11 cases. Sanchez disputed the Defaults, forcing Gavilan to confirm the Defaults through a contractually mandated arbitration process. Gavilan started arbitration proceedings in February 2019 before Judge Susan Soussan (Gavilan Resources, LLC v. SN EF Maverick, LLC, et al., No. 01-19-0000-5228, American Arbitration Association).

Following the commencement of Sanchez’s chapter 11 proceedings, Gavilan sought relief from the automatic stay to continue the arbitration. Respectful of the stay and the breathing room it affords debtors, Gavilan waited for progress to be made on Sanchez’s own restructuring before prosecuting its motion to lift stay. In December 2019 and January 2020, as the continued uncertainty weighed on Gavilan’s own business, Gavilan agreed with Sanchez to move the arbitration proceedings to Sanchez’s chapter 11 cases so that the Operatorship Dispute could finally be resolved. Trial on the Operatorship Dispute commenced on March 9, 2020 but was adjourned at the Court’s suggestion so the parties could continue negotiations. After multiple delays due to circumstances of Sanchez’s chapter 11 cases, trial is set to continue on May 22 and 26, 2020.

On April 30, 2020, the Bankruptcy Court confirmed the chapter 11 plan proposed by Sanchez in its chapter 11 cases. As indicated, Sanchez has moved to reject the JDA and assume the JOAs in connection with its plan of reorganization. Sanchez’s plan has not yet become effective and it is unclear when Sanchez’s plan will go effective.

The right to operatorship of the Comanche Assets is a valuable asset of the Debtors’ estates and Gavilan intends to vigorously pursue those rights as part of its own sales and restructuring efforts. In fact, the timing of this filing was made sufficiently in advance of the continued hearings on the Operatorship Dispute so as not to jeopardize the trial dates and to protect Gavilan from any potential efforts by Sanchez to further delay the resolution of this matter."

According to the Debtors: "Headquartered in Houston, Texas, Gavilan Resources is a private company established in 2017 in partnership with Blackstone to acquire, develop and produce oil and natural gas assets in the Eagle Ford Shale play in South Texas.

Our foundational acquisition was the $2.2 billion purchase of assets from Anadarko Petroleum in coordination with Sanchez Energy Corporation and we are actively seeking to build our company through the acquisition of operated properties in the Eagle Ford Shale play.  Today, we own approximately 77,000 net acres of leasehold and have current net production of approximately 32,000 barrels of oil equivalent per day. 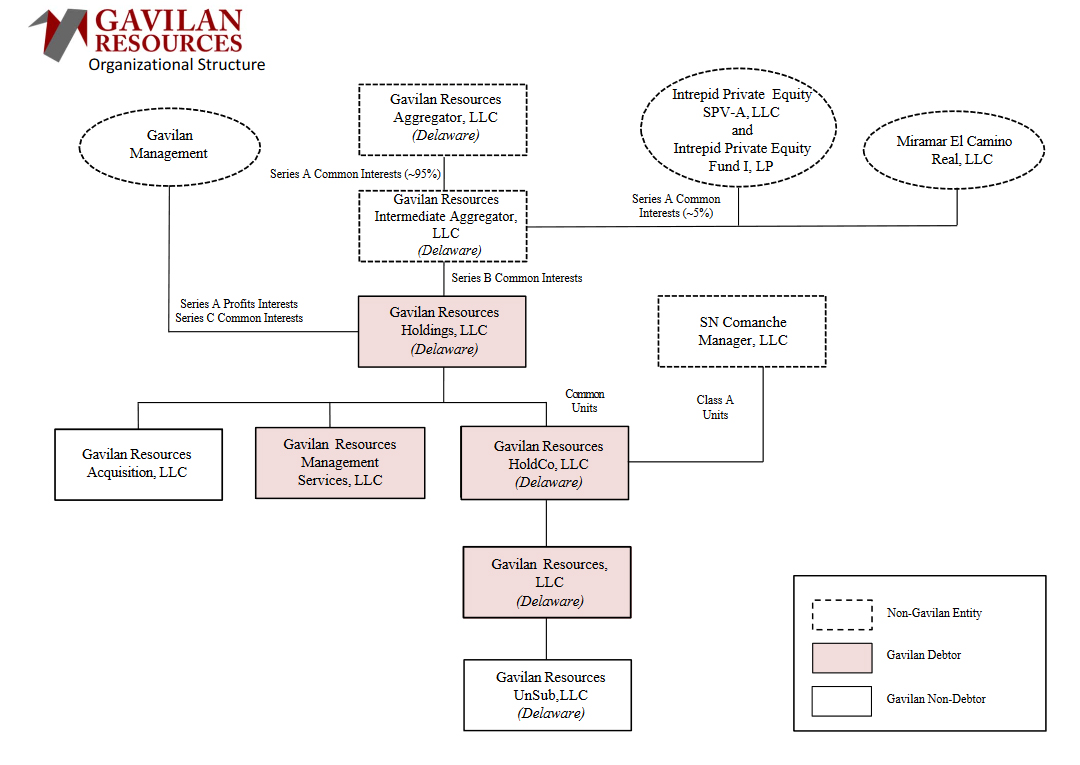