October 26, 2020 – The Debtors filed solicitation versions of each of their Plan and Disclosure Statement [Docket No. 392, with the Disclosure Statement attaching the Plan] and separately filed redlined pages showing changes to the two documents as filed on October 20, 2020 [Docket No. 393]. The only significant change to the Disclosure Statement was the added notation that "The proof of claim of J. Aron & Company, LLC for $583,585.64 in respect of swap default settlement payments shall receive identical treatment to the RBL Lender Claims," with this revised treatment otherwise reflected in the summary table below.

On October 16th, the Court approved the $50.0mn sale of substantially all of the Debtors' assets to onetime nemesis Mesquite Energy, Inc. (f/k/a Sanchez Energy Corporation) paving the way for the filing of this Plan of Liquidation further to which the sale proceeds wiil be distributed, that distribution being to the Debtors' prepetition RBL lenders who are owed in excess of 4100.0mn.

The Disclosure Statement provides: "The Debtors conducted an auction for substantially all of their assets …and designated Mesquite Energy, Inc. (f/k/a Sanchez Energy Corporation) (‘Mesquite’) as the bidder presenting the highest or best offer (the ‘Successful Bid’)….On October 16, 2020, the Court entered the Order (A) Approving Sale of Debtors’ Assets, (B) Authorizing Assumption and Assignment of Executory Contracts and Unexpired Leases, and (C) Granting Related Relief [Docket No. 361], approving the APA. Pursuant to the Plan, on the Effective Date, either (1) the Debtors shall each be liquidated, wound down and terminated, as provided in Section 5.9 of the Plan, or (2) the Debtors shall be merged together into one remaining Designated Debtor, which Designated Debtor shall be liquidated, wound down and terminated as provided in Section 5.9. The Debtors propose to appoint their current restructuring advisor, Huron Consulting Services LLC (‘Huron’) as the Liquidating Agent for each of the Debtors. The Liquidating Agent shall carry out and implement all provisions of the Plan after the Effective Date and wind down the Debtors’ estates.

Mesquite will be perhaps be more familiar as the former Sanchez Energy Corporation ("Sanchez") which has itself only just emerged from bankruptcy, having barely avoided liquidation in its own extremely fractious Chapter 11 cases. Mesquite has also been something of a nemesis of the current Debtors, who largely blame a soured partnership with Mesquite for being in Chapter 11 in the first place.

Less than four years ago, the Blackstone-backed Debtors teamed up with Sanchez to collectively pay $2.3bn (split 50/50) to purchase Anadarko Petroleum's "Comanche Assets." A complicated set of joint operating, management and development agreements (see further below), however, effectively gave Sanchez control of both oil output and revenue streams, a whip hand that the Debtors argue Sanchez abused and which has led to a series of adversary proceedings in each of the Sanchez cases (the adversary proceedings survived the Sanchez emergence from bankruptcy) and the Debtors' cases.

In recent weeks the edge seems to have come off the shared animus, with the parties jointly requesting on September 30th that adversary proceedings be delayed noting that the "Parties are currently in the middle of several other processes and proceedings that may moot or resolve the claims and issues in dispute in this case. Those other proceedings include Gavilan’s asset auction, which is currently in process, and Plaintiffs’ efforts to reject the Joint Development Agreement in their own bankruptcy proceeding, which is also pending before this Court in Case No. 19-34508, In re Sanchez Energy Corporation et al."

It will undoubtedly help that the Debtors' cases and the Sanchez cases are being heard by the same judge, Marvin Isgur. It probably also helps that (i) Mesquite is genuinely under new ownership and its controversial former President and CEO Tony Sanchez III now gone and (ii) Mesquite's new owners, led by Apollo and Fidelity, have lost at least as much via their investments in Sanchez (and indirectly the Commanche Assets) as Blackstone has lost at Gavilan.

In a declaration in support of the Chapter 11 filing (the “Roberts Declaration”), David E. Roberts, Jr., the Debtors’ Chief Executive Officer, detailed the events leading to Gavilan’s Chapter 11 filing. The Roberts Declaration states: “The precipitous decline in oil prices from the combined effect of the COVID-19 pandemic and the flooding of oil markets by warring international producers forced Gavilan into these chapter 11 proceedings. Since the fall of 2018, however, Gavilan has been entangled in, first, an increasingly unworkable relationship with Sanchez brought on by, among other things, Sanchez’s own financial difficulties; second, arbitration (and litigation) stemming from Sanchez’s defaults under the JDA (the ‘Operatorship Dispute’); and, ultimately, Sanchez’s own chapter 11 cases filed in August 2019.

Gavilan enters these chapter 11 proceedings with a plan to market its business and assets while continuing its pursuit of operatorship of the Comanche Assets via the Operatorship Dispute.

Gavilan, Sanchez, and UnSub are parties to the JDA. Sanchez was in Default, for two independent reasons, under the JDA for months – before Sanchez filed its own chapter 11 cases. Sanchez disputed the Defaults, forcing Gavilan to confirm the Defaults through a contractually mandated arbitration process. Gavilan started arbitration proceedings in February 2019 before Judge Susan Soussan (Gavilan Resources, LLC v. SN EF Maverick, LLC, et al., No. 01-19-0000-5228, American Arbitration Association).

Following the commencement of Sanchez’s chapter 11 proceedings, Gavilan sought relief from the automatic stay to continue the arbitration. Respectful of the stay and the breathing room it affords debtors, Gavilan waited for progress to be made on Sanchez’s own restructuring before prosecuting its motion to lift stay. In December 2019 and January 2020, as the continued uncertainty weighed on Gavilan’s own business, Gavilan agreed with Sanchez to move the arbitration proceedings to Sanchez’s chapter 11 cases so that the Operatorship Dispute could finally be resolved. Trial on the Operatorship Dispute commenced on March 9, 2020 but was adjourned at the Court’s suggestion so the parties could continue negotiations. After multiple delays due to circumstances of Sanchez’s chapter 11 cases, trial is set to continue on May 22 and 26, 2020.

On April 30, 2020, the Bankruptcy Court confirmed the chapter 11 plan proposed by Sanchez in its chapter 11 cases. As indicated, Sanchez has moved to reject the JDA and assume the JOAs in connection with its plan of reorganization. Sanchez’s plan has not yet become effective and it is unclear when Sanchez’s plan will go effective.

The right to operatorship of the Comanche Assets is a valuable asset of the Debtors’ estates and Gavilan intends to vigorously pursue those rights as part of its own sales and restructuring efforts. In fact, the timing of this filing was made sufficiently in advance of the continued hearings on the Operatorship Dispute so as not to jeopardize the trial dates and to protect Gavilan from any potential efforts by Sanchez to further delay the resolution of this matter.”

The Disclosure Statement [Docket No. 373] attached the following exhibits: 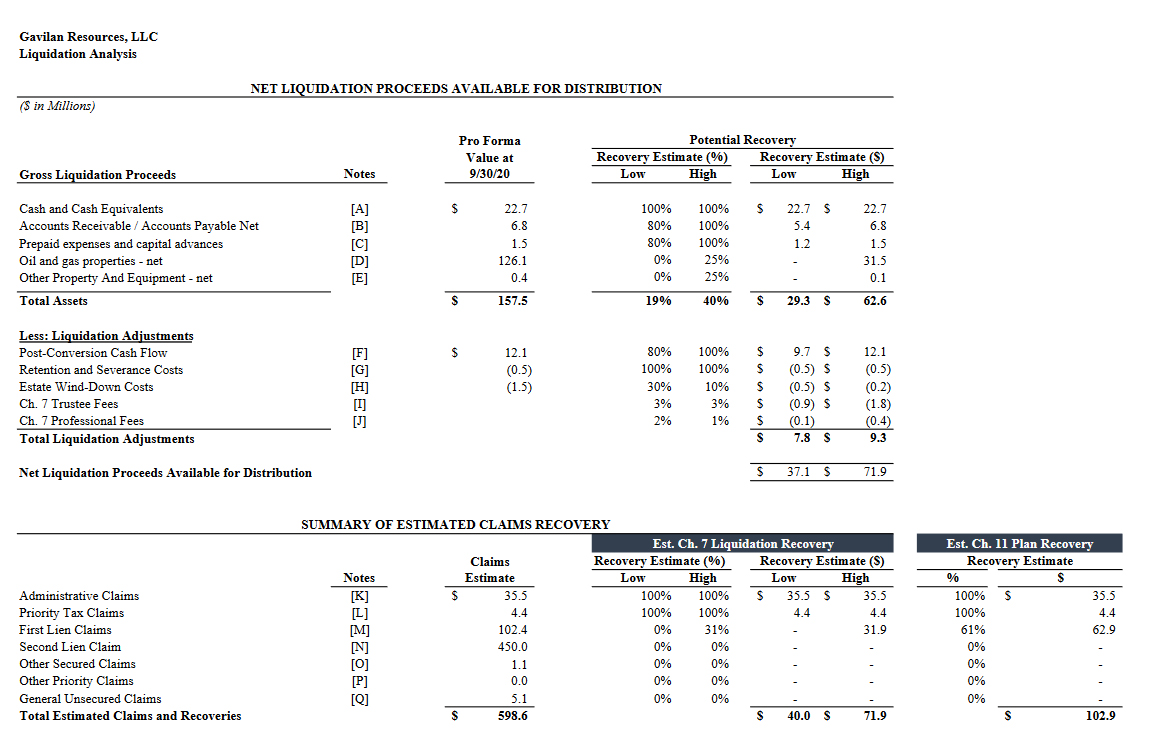 According to the Debtors: "Headquartered in Houston, Texas, Gavilan Resources is a private company established in 2017 in partnership with Blackstone to acquire, develop and produce oil and natural gas assets in the Eagle Ford Shale play in South Texas.

Our foundational acquisition was the $2.2 billion purchase of assets from Anadarko Petroleum in coordination with Sanchez Energy Corporation and we are actively seeking to build our company through the acquisition of operated properties in the Eagle Ford Shale play.  Today, we own approximately 77,000 net acres of leasehold and have current net production of approximately 32,000 barrels of oil equivalent per day.