August 10, 2020 – The Court hearing the Grupo Famsa case issued an order approving the Debtor's request for the dismissal of its prepackaged Chapter 11 case [Docket No. 41]. The dismissal follows the Debtor's decision to pursue a more comprehensive bankruptcy proceeding in Mexico; with that Mexican bankruptcy to be paired with an ancillary Chapter 15 case in the United States.

The reason for the sudden shift from prepackaged Plan to case dismissal was the late June determination of a Mexican banking authority to institute a "managerial intervention" at non-Debtor subsidiary Banco Famsa based on the undercapitalization of that bank. Although the Debtor is rather short on explaining the legal implications of that intervention under Mexican law, the practical implications are pretty clear; Banco Famsa has been left unable to provide retail banking services to the Debtor's clients…to offer credit to the Debtor's retail customers; a significant blow for a retailer for whom a massive 83.1% of consolidated retail sales are made possible by its credit sales programs.

The knock-on effect of the inability of the banking half of the Debtor's business (see structure chart below) to be able to provide credit to the purchasers of goods from the retail half of the business…is that the Debtor found itself unable to make scheduled payments in respect of credit lines which its prepackaged Plan had treated as unimpaired. The Plan as approved had shifted to a degree that it was no longer the same creditor-approved prepackaged Plan.

The problem for the Debtor, however, is much greater than the unfeasibility of its Chapter 11 case. The "managerial intervention" having a much more significant impact on the Debtor's Mexican operations than on its US operations. The Debtor's description of its business model makes this pretty clear: "As of December 31, 2019, Famsa owned and operated 430 stores and 11 distribution centers, including 379 stores in 90 cities throughout Mexico, and 22 stores and 29 personal loans branches in the states of Texas and Illinois.

In connection with its retail operations, Famsa offers consumer financing to customers who opt to purchase products and services on credit, many of whom do not typically have access to other forms of financing. In 2019, 83.1% of Famsa’s consolidated retail sales were through its credit sales programs."

The result of the intervention, has been that the Debtor has been compelled to file for bankruptcy protection in Mexico, with an ancillary Chapter 15 proceeding now filed in the United States.

In a filing in respect of the Chapter 15, the Debtor states: "As a consequence of the intervention against Banco Famsa, the Foreign Debtor and its subsidiaries have continued to experience a combination of liquidity and revenue issues, challenges to retail operations, arrears in payments to creditors and suppliers, and limited access to long-term refinancing. These issues compelled the Foreign Debtor to undertake an insolvency proceeding (a concurso mercantil, herein the ‘Concurso Proceeding’) under the Mexican Insolvency and Bankruptcy Act (the ‘Ley de Concursos Mercantiles,’ or ‘LCM’).

Accordingly, on August 6, 2020 the Foreign Debtor initiated the Concurso Proceeding in the Juzgado de Distrito en Materia Civil y del Trabajo en el Estado de Nuevo León (the ‘Concurso Court’). The Concurso Proceeding will allow the Foreign Debtor to obtain a breathing spell while it attempts to right-size its balance sheet and address the financial and operational issues discussed above.

The dismissal motion [Docket No. 30], which precedes the Mexican bankruptcy filing, elaborated, “Late in the afternoon of June 30, 2020, Mexico’s Comisión Nacional Bancaria y de Valores (an independent agency of the Secretary of Finance and Public Credit responsible for regulating the Mexican financial system) instituted a managerial intervention (intervención) of Banco Famsa, one of the Debtor’s non-debtor subsidiaries. The intervention was premised upon Banco Famsa’s alleged failure to meet certain capitalization requirements.

As noted in the Debtor’s Disclosure Statement, the Debtor established Banco Famsa in 2007 as a commercial bank subsidiary to allow it to offer banking services to its customers, including offering credit to support the retail customers of the Debtor’s other non-debtor subsidiaries.

In view of the managerial intervention, the Debtor and its advisors promptly undertook to understand the nature of the action against Banco Famsa, and what effect the action would have on the Debtor’s ability to effectuate its Plan.

In the absence of the credit support to the Debtor’s retail customers (and likely resultant negative impact on the retail business) caused by the managerial intervention of Banco Famsa, the Debtor’s management determined that the most prudent course of action was to conserve liquidity in order to ensure that the Debtor’s retail business could continue uninterrupted. As a result, the Debtor did not make scheduled interest and principal amortization payments on certain of its credit lines during the week of June 30 — obligations that the Debtor had classified as unimpaired under its Plan.

In view of the impact on the Debtor’s business and the attendant liquidity issues, the Debtor determined that the best path forward would be to withdraw the Plan and seek dismissal of the Chapter 11 Case. Accordingly, on July 9, 2020 the Debtor filed its Notice of Withdrawal of Prepackaged Chapter 11 Plan [Docket No. 27].

Moreover, the Plan was the product of extensive consultation with the Debtor’s creditors and other parties in interest, and analysis of the Debtor’s ability to effectuate a restructuring of the 2020 Notes. Because of the recent developments concerning Banco Famsa, the Debtor believes it is no longer feasible to implement such a restructuring on those terms.”

As noted below, the Debtor is 67.33% owned by trusts which manage that holding for the benefit of the Garza Valdez family. Mr. Humberto Garza Valdéz is the Debtor's current CEO.

[As previously reported] The Debtor's principal Plan objective is to refinance the 2020 Notes, ie those notes not tendered in the October 2019 exchange offer discussed below.

The Disclosure Statement provides: "The principal objective of the Solicitation and the Plan is to refinance the 2020 Notes. The Company will not pay the 2020 Notes at maturity, and believes that consummation of the Plan represents the best prospect for achieving a  successful  restructuring  of  the  2020  Notes  without affecting other obligations to its lenders, trade creditors, depositors or other parties. The Debtor believes that it will be able to pay interest and principal on the New Notes when due. The Debtor has stated that it intends to meet its payment obligations in the next few weeks under its 9.75% Senior Secured Notes due 2024 and its short-term debt certificates (Cebures)."

The 2020 Notes, which currently have an outstanding principal amount of US$59.1mn were issued under an indenture dated as of May 31, 2013, by and among the Debtor, the subsidiary guarantors named therein, and The Bank of New York Mellon, as trustee. The Debtor’s obligations under the 2020 Notes are guaranteed by the Non-Debtor Guarantors. Interest payments under the Senior Secured Notes are made semi-annually on June 1 and December 1 of each year (or, if a non- Business Day, the next succeeding Business Day). The principal amount of the 2020 Notes matures on June 1, 2020.

In addition to the 2020 Notes and the 2024 Notes, the Debtor’s obligations include credit lines with Mexican and international financial institutions and short term notes issued in Mexico, among others. All obligations of the Debtor other than the 2020 Notes will be unimpaired or reinstated under the Plan.

The Debtors’ claims agent has provided the Court with Plan voting results [Docket No. 4], which were as follows:

The Disclosure Statement provides: "Through the 2019 Exchange Offer, approximately 57.8% of the then-outstanding 2020 Notes were exchanged for 2024 Notes. In light of the upcoming maturity of the 2020 Notes, the Debtor began considering alternatives to redeem or refinance the remaining 2020 Notes. Because of the current financial environment in Mexico, which was exacerbated by the outbreak of the coronavirus (COVID-19) pandemic, the Debtor, in consultation with its advisors, determined that the best path to achieve a successful restructuring of the 2020 Notes was through confirmation of the Plan and commencement of the Chapter 11 Case."

The Debtor, Grupo Famsa, S.A.B. de C.V., is a variable capital public stock corporation under the laws of Mexico, originally organized on December 27, 1979 under the name Corporación Famsa, S.A.

Famsa operates in the Mexican retail and banking sectors. Its target market is the middle and low-middle income segments of Mexico’s population and the U.S. Hispanic population in the U.S. states where it operates. Famsa’s Mexican retail operation offers furniture, electronics, household appliances, cellular telephones, computers, motorcycles, clothing and other durable consumer products, which are sold mainly through its Famsa stores. In the states of Texas and Illinois in the United States, Famsa offers furniture and appliances through its subsidiary Famsa, Inc. As of December 31, 2019, Famsa owned and operated 430 stores and 11 distribution centers, including 379 stores in 90 cities throughout Mexico, and 22 stores and 29 personal loans branches in the states of Texas and Illinois.

In connection with its retail operations, Famsa offers consumer financing to customers who opt to purchase products and services on credit, many of whom do not typically have access to other forms of financing. In 2019, 83.1% of Famsa’s consolidated retail sales were through its credit sales programs. In 2007, Famsa established a commercial bank subsidiary, Banco Famsa, allowing it to offer additional banking services to its customers, and generating an additional form of short-term financing for its operations. As of December 31, 2019, Banco Famsa operated 359 banking branches within Famsa stores and 12 independent banking branches in Mexico, and managed an aggregate amount of 1.3 million saving accounts and 1.5 million active consumer credit accounts. 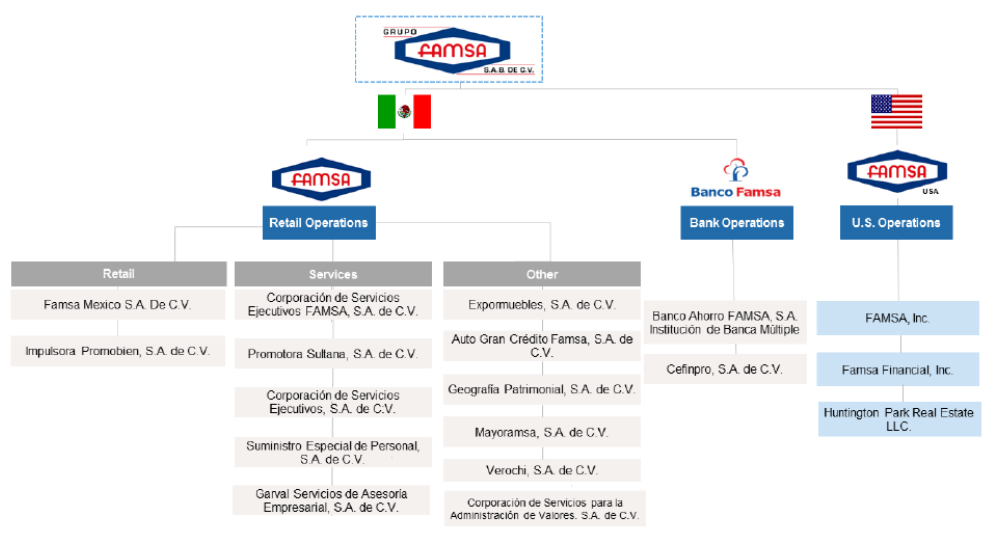