June 1, 2022 – GT Real Estate Holdings, LLC ("GTRE" or the “Debtor”) filed for Chapter 11 protection with the U.S. Bankruptcy Court in the District of Delaware, lead case number 22-10505 (Judge Karen B. Owens). The Debtor, a developer of a headquarters and practice facility for the NFL's Carolina Panthers and controlled by Appaloosa Managment's David Tepper*, is represented by Joseph J. Farnan, Jr. of Farnam LLP. Further board-authorized engagements include: (i) White & Case LLP as general bankruptcy counsel, (ii) Alvarez & Marsal as financial advisors, and (iii) Kroll Restructuring Administration LLC as claims agent.

* Reports indicate that Tepper has invested more than $175.0mn into the practice facility, which is located about 25 miles south of the team’s current downtown stadium and headquarters in Charlotte, North Carolina. Tepper co-founded distressed debt-focused hedge fund Appaloosa Management in 1993 and purchased the Carolina Panthers in 2018.

The Debtor, a Delaware limited liability company, announced to The Associated Press ("AP") in a statement on June 1st that is had begun a court-led financial restructuring process in Delaware to effect an orderly wind-down of the project. The action follows the termination and rescission of the agreements with the City of Rock Hill that related to the project, which GTRE previously announced.

In that statement, the Debtor noted: "In recent weeks, GTRE has been confronted with various claims, some valid and some not, from vendors, contractors and other third parties, including York County, SC…GTRE is taking this action to ensure legitimate claims are processed as fairly and expeditiously as possible under a court supervised process, and to achieve the project’s orderly and safe wind-down. GTRE intends to resolve its legitimate obligations.”

In earlier statements, the Debtor announced that (i) it was pausing construction on the stadium project after failing to receive bonds from the City of Rock Hill to pay for public infrastructure (mid-March) and (ii) subsequently that it had "terminated their agreement with the City of Rock Hill" (mid-April).

Tepper’s company said it negotiated with the city for more than a year, warning them in March they had 30 days or the Panthers would pull out. They said in a statement in April that is 'unfortunate that some recently decided to conduct a misguided, destructive public relations campaign to obscure their failures.'

Rock Hill officials responded to the announcement, saying the Panthers’ announcement was 'misleading and erroneous' and that they embraced the Panthers, welcomed their headquarters to South Carolina and 'did everything to make this project a success and has not defaulted on any of our obligations.'

'It was and remains our intention to continue negotiating in good faith while protecting the interests of our taxpayers,' the City of Rock Hill had said. 'In fact, in the past few weeks we have attempted to meet with the Panthers on numerous occasions to no avail'.”

The Hickman Declaration (defined below) explains, "As a result of the impending termination of the litigation forbearance under the Standstill Agreement, the potential for disruption and unequal treatment of creditors posed by individual creditors asserting Mechanic’s Liens and the general lack of liquidity for the Debtor needed to protect and preserve the Project on an indefinite basis, the Debtor commenced this Chapter 11 Case to (among other things):

(a) provide a centralized and efficient forum for the orderly and safe wind-down of the Project,

(b) equitably address the legitimate liabilities of the Debtor and

(c) preserve the Project safely and securely while pursuing a process to maximize the value of the Debtor’s assets and resolve legitimate claims, in each case under the protection of the automatic stay and with the benefit of the $20 million of non-priming DIP Financing."

"Each of the [Finance and Construction Administration Agreement] FCAA, the [Land Development Agreement] LDA and the Interlocal Agreement require that the City issue $225 million of public bonds to pay for the Bond Funded Infrastructure. The Debtor had no obligation to commence construction on the Project until the Minimum Bond Funding Amount was placed in the Project Fund. Nevertheless, the Debtor began incurring significant expenses in connection with the Project, including in relation to the Bond Funded Infrastructure. The Interlocal Agreement originally set October 31, 2020 as the deadline by which the City needed to issue the public bonds. After that date came and went, the Debtor agreed under the subsequently executed FCAA to a deadline of February 26, 2021 for the bond issuance. That date also passed without the City issuing the bonds.

In discussions following the failure of the City to issue the public bonds by the deadline under the FCAA, the parties engaged in various good-faith discussions to try and find a workable commercial alternative. No such alternative could be agreed upon. Meanwhile, the Debtor continued to invest in the Project.

Eventually, in light of the inability or unwillingness of the City to obtain low-cost public financing, and the significant ongoing expenditures required to continue construction, the Debtor suspended construction of the Project on March 7, 2022. At that time, the general operating account of the Debtor had a balance of $255,841.77.

Rescission of the FCAA and Special Termination of the LDA

The City Notifies the Debtor of Purported Defaults under the FCAA

On April 29, 2022, counsel for the City issued a letter to the Debtor alleging that (1) the Debtor failed to cooperate with the City in providing information and other assistance that the City believes would have enabled the City to issue bonds sufficient to fund the Project Account with the Minimum Bond Funding Amount in early 2022, and (2) the Debtor’s suspension of work on the Project were, in each case, defaults under the FCAA. The Debtor disputes the City’s contentions, which were unsupported by any specific allegation regarding the Debtor’s failure to cooperate either prior to, or after, the Bond Funding Deadline.

Since the time the Debtor suspended construction of the Project, the Debtor has been coordinating with the Construction Manager to secure the Project site and protect materials and equipment. In addition, since the suspension of construction the Debtor has made concerted efforts to pay legitimate Vendor Claims as they became due whenever possible, which has significantly reduced the amount of unpaid Vendor Claims. Such payments were made with the new money proceeds of the Prepetition Promissory Notes, as well as the proceeds of a sale of a parking lot adjacent to Panthers stadium, which the Debtor sold on April 12, 2022 to an affiliate, PS Marks LLC, for $15.5 million, the same price the Debtor paid for it previously. Since the suspension of construction on March 7, 2022, the Debtor has paid approximately $40 million in invoices owed to vendors and service providers for the Project, all or substantially all of which may have been entitled to Mechanic’s Liens.

Notwithstanding the rescission of the FCAA and the special termination of the LDA by the Debtor, and the City’s allegations regarding the Debtor’s breach of the FCAA, the Debtor thought it was important to engage with the City in discussions regarding the future of the Project to determine if a consensual resolution of their disputes and a mutually acceptable path forward could be agreed. Accordingly, on May 2, 2022, the Debtor and the City entered into the Standstill Agreement to facilitate those discussions. Pursuant to its terms, the litigation forbearance in the Standstill Agreement expired at 5:00 pm prevailing Eastern Time on June 2, 2022.

Vendors have begun providing notice to the Debtor of their statutory Mechanic’s Liens on the Project and these notices may increase in the weeks to come. Further, the Debtor itself lacks the liquidity needed to continue to preserve the safety and security of the Project indefinitely.”

The acquisition costs for the site of the Project and the construction costs of the Project were paid by the Debtor, which was funded with (1) capital contributions from or via the Member, (2) $163.5 million of intercompany loans from Panthers Football, LLC, (3) the City Contribution made pursuant to the FCAA and and (4) the County Contribution made pursuant to the Interlocal Agreement.

Since construction on the Project was paused, the Debtor has funded payments of expenses from proceeds obtained from (i) the sale to PS Marks LLC of a parking lot adjacent to the Panthers’ football stadium in Charlotte, North Carolina and (ii) the issuance of a $4 million amended and restated secured promissory note (dated May 26, 2022) and a $3.2 million secured promissory note (dated May 31, 2022), in each case issued by the Debtor to the Member (the “Prepetition Promissory Notes”).

The Debtor’s real estate at the site is not subject to any mortgage and the Debtor is not party to any credit agreements, bond indentures, promissory notes, or other non-trade financial credit arrangements, other than the Prepetition Promissory Notes and intercompany loans made by Panthers Football, LLC.

To date, the Debtor has invested approximately $282 million on the Project. Significant work would be required to complete the Project, which the Debtor estimates would cost at least $500 million under current market conditions (inclusive of re-mobilization and re-bid costs for goods and services).

Although the Debtor will seek a modest extension of the time to prepare its schedules, the Debtor intends to expeditiously prepare and file its schedules of assets and liabilities and establish a claims bar date, which will be crucial to the Debtor’s objective of identifying legitimate creditor claims.

Various parties have delivered goods and rendered services to the Construction Manager and the Project prior to the Petition Date and have a right to payment as a result (the “Vendor Claims”). Since suspension of the Project in March 2022, parties have provided notice of their Mechanic’s Liens under South Carolina law. The Debtor believes that all or substantially all Vendor Claims are held by the Construction Manager’s subcontractors, and thus will be subsumed within the claim of the Construction Manager. However, because the subcontractors may be entitled to Mechanic’s Liens against the Debtor’s property under South Carolina law, each individual subcontractor with a Mechanic’s Lien that has not dissolved may have a claim against the property of the Debtor, which I am informed may be considered a claim against the Debtor under the Bankruptcy Code.

The estimated quantum of Vendor Claims (without duplicating the claims of the subcontractors and the Construction Manager) could be as high as $90 million (with a low-end estimate based on presently available information of $55 million), but the Debtor intends to use the proof of claim process to reconcile the Vendor Claims and determine on a final and equitable basis the appropriate allowed amount of such claims (as well as any other claims asserted by parties in interest).

According to the Debtors: “The Debtor was formed for the purposes of owning the site and developing the Project. While the vision for the Project was first announced in 2019, the Debtor acquired the site in March 2020 and broke ground on the Project in July 2020. The multi-faceted site was intended to not only serve as the Panthers’ new team headquarters, but also was to include indoor and outdoor practice facilities, an indoor events center, a premier orthopedic sports medicine facility, corporate office space, residential spaces and retail stores. All of this would be surrounded by parkland-like grounds complete with bike and walking paths and a stream. A phase 1 opening for the site was scheduled for 2023." 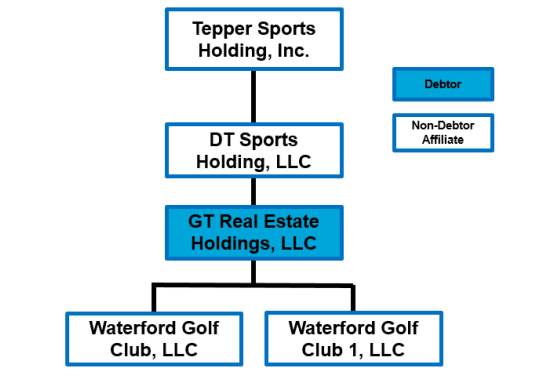