November 16, 2020 – The Court hearing the Gulfport Energy Corporation cases issued an order authorizing the Debtors to (i) access $90.0mn of debtor-in-possession (“DIP”) financing on an interim basis and (ii) use cash collateral [Docket No. 114].

The $15.0mn balance, of what is in total $105.0mn of DIP financing being provided by certain prepetition lenders, is to be made available upon the issuance of a final DIP order. Also to be greenlighted with that final DIP order which will be considered at a December 11th hearing, is a roll-up of $157.5mn of the Debtors’ prepetition RBL Credit facility.

For the Debtors, who faced the crystallization of over $180.0mn of hedging arrangements, the DIP facility critically permits "the Debtors [to] use approximately $60 million of the DIP financing proceeds to pay down these consensually-terminated hedges."

The Debtors' DIP motion [Docket No. 29] reads: “The Debtors are filing these chapter 11 cases with committed DIP financing that will allow them to operate in the ordinary course during the period of these chapter 11 cases and, upon satisfaction of certain conditions precedent, refinance their prepetition revolving credit facility and DIP facility in full with a committed $580 million exit facility. This ‘DIP-to-exit’ financing is the keystone of the Debtors’ restructuring: from the outset of these prearranged cases, the Debtors have a clear, definitive path to emergence from chapter 11 in accordance with the restructuring transactions contemplated by the restructuring support agreement (the ‘Restructuring Support Agreement’) between the Debtors and their holders of funded debt, including lenders holding more than 95% of the debt outstanding under the Debtors’ prepetition revolving credit facility and an ad hoc group of unsecured noteholders representing approximately 70% of the principal amount of the Debtors’ unsecured notes (the ‘Ad Hoc Noteholder Group’)…

Faced with mounting liquidity pressures and an upcoming interest payment on their unsecured notes, nonpayment of which would cause a cross-default on the Debtors’ revolving credit facility, the Debtors entered into a series of forbearances with their prepetition secured lenders (the ‘Prepetition First Lien Lenders’) and entered the grace period for an interest payment due on their unsecured notes. With the breathing room afforded by the forbearance and grace period, the Debtors focused their efforts on negotiating a comprehensive restructuring transaction that was supported by a supermajority of the Prepetition First Lien Lenders and the Ad Hoc Noteholder Group. Ultimately, following good faith and arm’s length negotiations, the parties agreed to a consensual restructuring to be implemented pursuant to a prearranged chapter 11 plan of reorganization. The restructuring would be facilitated by a DIP financing facility provided by the Prepetition First Lien Lenders that would be refinanced by an exit facility upon consummation of the chapter 11 plan contemplated by the Restructuring Support Agreement.

…As of October 22, 2020, the net obligations due from the Debtors on their hedges was approximately $183 million. Absent agreement by the hedge counterparties, they could terminate these hedges as a result of the Debtors’ filing for chapter 11 protection, crystallizing secured debt obligations of the Debtors that would be pari passu with the Debtors’ prepetition revolving credit facility. This massive increase in secured debt would have made a restructuring transaction profoundly more challenging. The potential incurrence of at least $180 million in secured debt relating to the termination of these hedge obligations meant the treatment of these prepetition hedges would be critically important to the negotiation of any restructuring transaction to be implemented through chapter 11. The parties negotiated extensively, at arm’s length and in good faith, regarding a global resolution of hedge issues. The parties reached a settlement that would allow for a partial termination and paydown of the existing hedges in exchange for an agreed forbearance on the remaining hedges. This settlement permitted the Debtors to maintain such hedges through the chapter 11 case as obligations that are pari passu with the DIP Facility and ultimately, upon emergence, continue as part of the Exit Facility. This carefully-negotiated construct prevented the Debtors from accumulating a level of secured debt that may have been difficult to refinance as part of a restructuring transaction.

More specifically, the settlement of hedge issues in the Restructuring Support Agreement was as follows: 75% of the sold calls for 2022 were consensually terminated, and the parties agreed that the Debtors would use approximately $60 million of the DIP financing proceeds to pay down these consensually-terminated hedges. In exchange, the Debtors’ hedge counterparties agreed not to terminate their remaining sold calls as the result of the filing of the Debtors’ chapter 11 cases (notwithstanding the ‘safe harbor’ provisions of the Bankruptcy Code with respect to such termination). To be clear, the transaction contemplated by the Restructuring Support Agreement would likely be impossible if hedge counterparties did not agree to maintain certain prepetition hedges and to permit post-petition hedging: the Debtors would likely not be able to satisfy the conditions precedent in the committed exit facility.

The DIP facility provides the Debtors with liquidity during their chapter 11 cases, consensual use of cash collateral, and a clear path to exit from chapter 11. The incremental liquidity provided by the DIP facility will enable the Debtors to make the approximately $60 million sold call termination payment, a necessary component of the settlement on these issues and a prerequisite to the hedge counterparties’ agreement not to terminate their remaining sold calls. The DIP facility and committed exit financing are integral components of the overall restructuring transaction contemplated by the Restructuring Support Agreement and significantly alleviate uncertainty related to the Debtors’ restructuring.”

As of the Petition Date, the Debtors have approximately $2.41 billion in total funded debt obligations as summarized below: 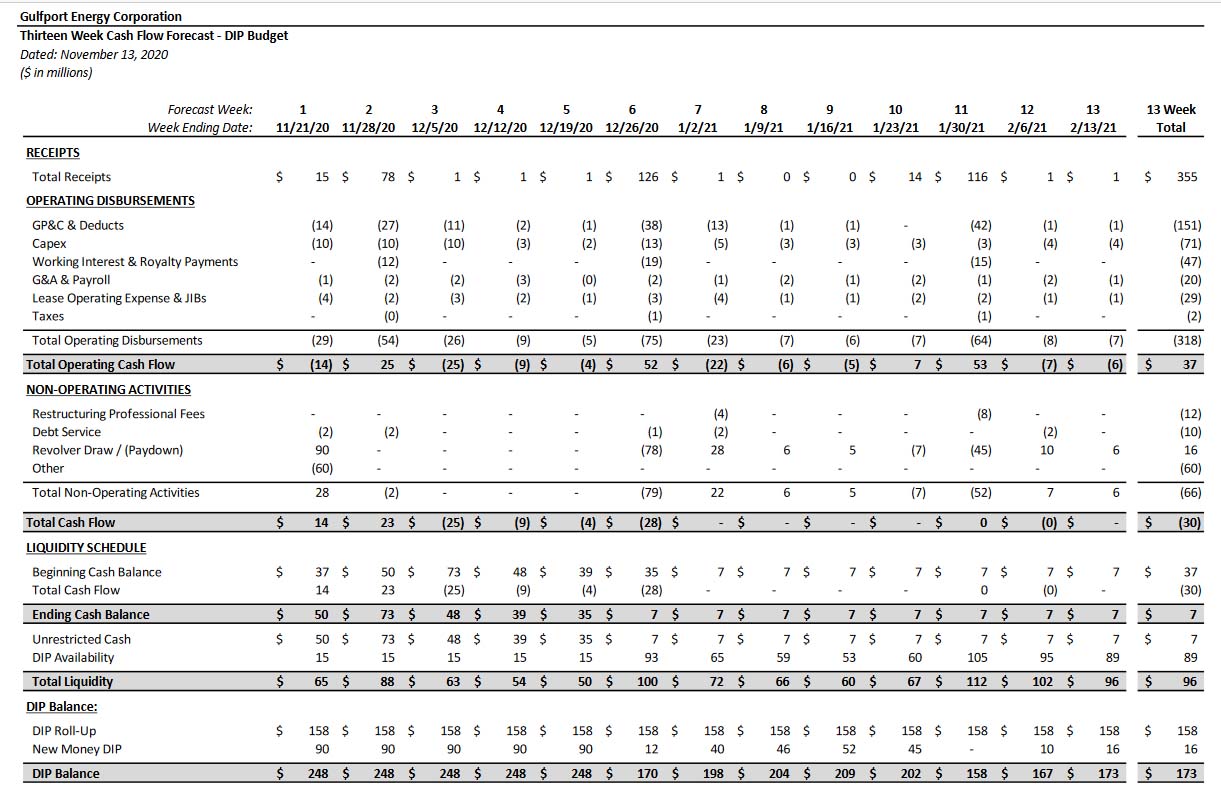 According to the Debtors: “Gulfport Energy Corporation (NASDAQ: GPOR) is an independent natural gas and oil company focused on the exploration and development of natural gas and oil properties in North America and is one of the largest producers of natural gas in the contiguous United States. Headquartered in Oklahoma City, Gulfport holds significant acreage positions in the Utica Shale of Eastern Ohio and the SCOOP Woodford and SCOOP Springer plays in Oklahoma. In addition, Gulfport holds non-core assets that include an approximately 22% equity interest in Mammoth Energy Services, Inc. (NASDAQ: TUSK) and has a position in the Alberta Oil Sands in Canada through its 25% interest in Grizzly Oil Sands ULC.”